Canon obviously designed many things very well in the popular EOS R, and I believe the control ring controls are the most obvious example of that. However, like Michael, I have some usability issues with how the Canon EOS R was designed.

I think he is dead-on with his point about the location of the power switch and that that location should be a multifunction mode selector like Canon had in previous cameras and Nikon has in the Z series cameras. I simply can't understand using so much camera real estate for just an on-off switch.

I find the AF-ON button much more ergonomically friendly than Canon's location and like in the video, I find the joystick indispensable. On the Canon, I feel my thumb that is holding the camera far too close to the edge to be comfortable.

If I were going to buy a mirrorless camera system right now, between the Canon and the Nikon, the Z series would win hands down. Both have their strengths and weaknesses, but I feel Nikon did a bit better in their initial release, and with a better ergonomic and usable design, it will be easier for seasoned photographers to transition to the smaller camera.

Posted In:
Opinion
via:
Michael The Maven
14 Comments

Gear / September 7, 2018
The EOS R: Why This Mirrorless System Is a Home Run for Canon

...because there's only two mirrorless cameras to choose from...

For most photographers, that's essentially true. In June, before the R and Z7 launch, Canon and Nikon controlled 75% of the market. That's only gone up since August. Only a certain percentage of people switch brands because of lenses and so on. So, basically you've got two major camera companies and a slew of others and that's where we're at!

This is so far off that I think this person didn't use the camera for more than an hour. Somehow I access iso, shutter, aperture, and exp. comp in one click/action, because I actually customized the camera! Many of his complaints are completely insane and he should spend more than 10 minutes with it before making a clickbait video to get views on his YouTube channel.

true, you can customize .. still not as good as having dedicated buttons ... that is what Nikon users are used to do so it might be anoying (even little things like going to menu to format card) .. Fn/programmable buttons are than used for other usefull things ..

Customizing is EXACTLY as good as having dedicated buttons.

with one little difference that makes all the difference .. you can set 3-4 Fn buttons to some functions ... Nikon (or other brand) users already has those on dedicated buttons so they can use all customizable buttons to another things ...

What is so bizarre is that for me the interface of Canon's SLRs is the only thing keeping me there now that their competitors have leapfrogged ahead of them in IQ. It is brilliant, intuitive, and utilitarian. It wasn't broke so they kept essentially the same interface for 10 years, which only made me love them more. Why Canon "fixed" what wasn't broken in their MILC entry is beyond me.

I don't disagree that some things could have been better.... BUT, after using the camera for a few days, customizing it to my needs, and then taking it out on a real job I think the EOS R was over all very intelligently designed. I swore by my joystick for quickly moving my AF point, but talking to a canon rep at a store event he showed me how the touch drag works and suddenly I was like "what joystick?" and bought the camera. Everyone saying that the AF-On and AE Lock are to far to the edge should stop shooting one handed. The Info button is in a great spot IMHO, one quick thumb movement and you can toggle your histogram on/off in your view finder. But like anything, don't just take it out of the box and start tearing it down. I gave the Sony a7iii and a7riii a solid go, it just wasn't for me for a multitude of reasons, but you have to actually program your functions and take them out for a real test to know. Is the R my last camera or the best I've ever used, not by a long shot... but it serves my needs and works for me better than my 5dIV for the the of work I need it to.

It's not just one handed shooting that the AF-On button is awkward. No matter what you have to bend your thumb at an uncomfortable angle to use it. A little further to the left is all it needed to be.

Overall, though, I enjoyed using the body aside from that. I don't care for articulating screens vs tilt, but that's a personal preference. I'm not a Canon shooter so it doesn't really matter to me, but I did like this body more than Sony's (but less than Nikon's). I do think Canon DSLRs are a little more ergonomically friendly than Nikon DSLRs, though.

You mean you actually have to program the dedicated modes and use the tailored functions to know how they work?! I’ve got to read an instruction manual?!?!

Here we go again. I still still have a Canon EOS 1D,and a Nikon D2H. Guess what, they were different then. Main thing is, they still take great pictures for a 4 million pixel DSLR gadget.

This discussion should be very familiar with parents who have twins. They look the same,speak the same language, but by god, they are so different in every other ways.

Dude is a troll and Nikon shill, eos r is the best handling camera I’ve used, no pinky hanging off, no knuckle rubbing on the lens, crazy control customization with full exposure triangle access via metal dials, and I actually like the swipe bar and touchscreen implementation. The files are good too. The biggest thing though is the autofocus. It’s almost magic. The RF lenses look to be amazing too. Ownership bias 🙄 I didn’t rent it to make a gaslighting clickbait video. Dude also trolls Canon users on his YouTube channel. Not a fan of his. 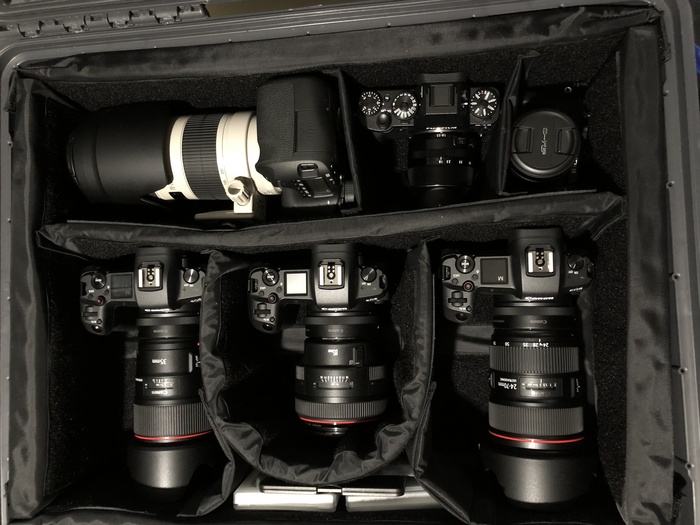 Sure, just as neutral as you are.