It may seem like it was only yesterday, but the upcoming total lunar eclipse is actually the first one in nearly three years. Taking place on the morning of January 31, it will be fully or partially visible to folks living in Asia, Australia, the Pacific, and North America. If you are in the United States, the farther north and west you live, the better. Here are five tips I’ve put together to help you prepare for capturing some epic shots.

1. Get Your Gear Ready

Prepping your gear to make sure that everything is charged, working, and there are no missing parts is probably a good general rule of thumb any time that you’re heading out on a shoot. For eclipses, it is especially important since they don’t come around that often. If you miss the shot you could be in a holding pattern for a long while. Having a good supply of charged batteries is one of the first things I ask people. Some things are able to be overcome when out in the field, but dead or forgotten batteries usually isn’t one of them. Also, remember to retrieve your memory card from your computer and put it back in your camera. In fact, if you shoot often, I would suggest you develop a system so you know which cards have been transferred and which ones are still needing to be done. Having your gear sorted doesn’t just stop with your camera and accessories. It’s also important that you have the right clothing for the weather. And, since you’ll be shooting at night, a headlamp is a terrific accessory to have with you at all times. Some of this might seem like common sense but I bet most of us have arrived on location to find batteries not charged and memory cards missing in action. To cover all bases, I would suggest making a checklist and go through it before each time out. 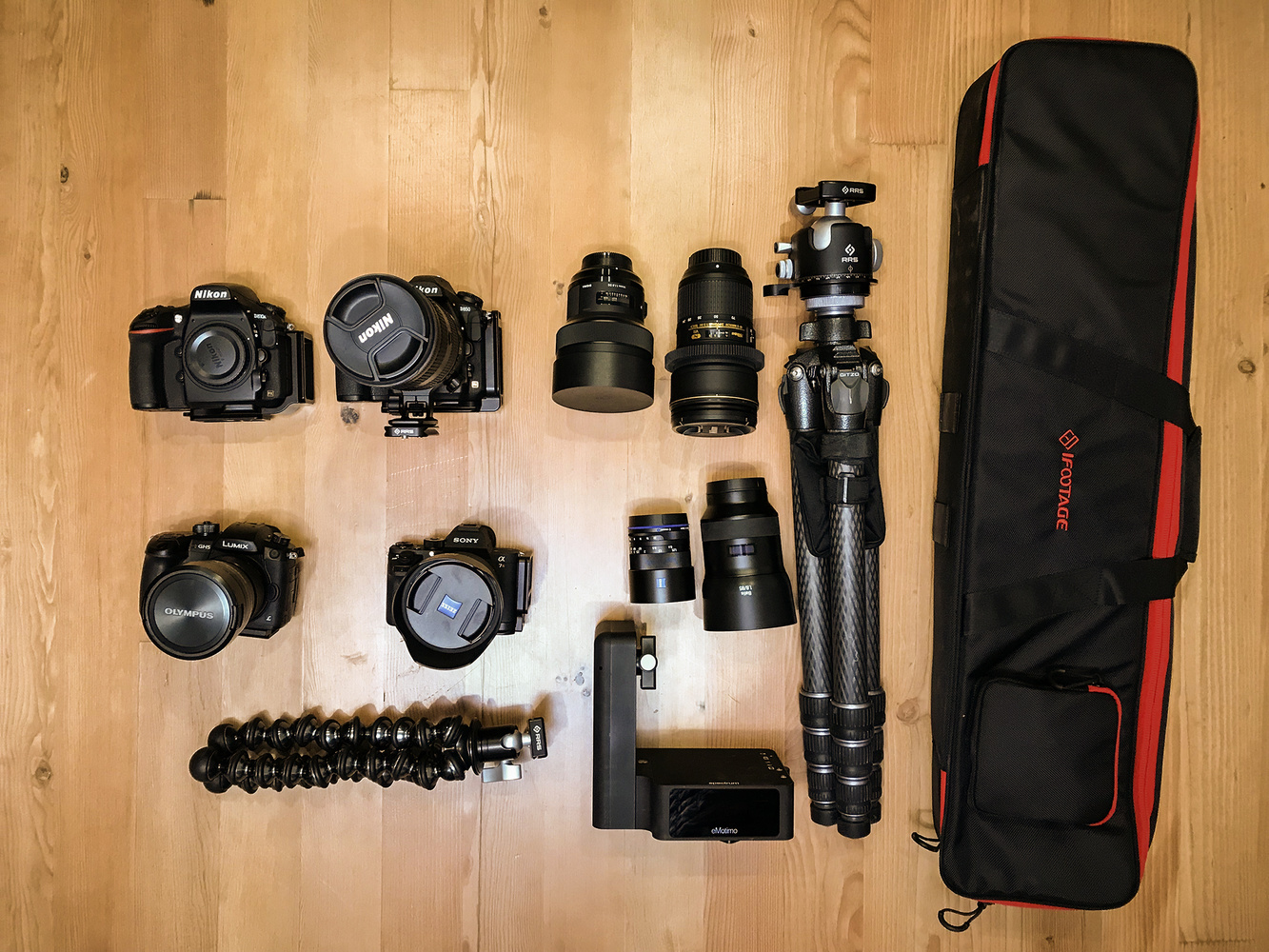 Oftentimes you can just head out to an area you want to shoot and start snapping away. For eclipses, and many astronomical events, a bit more planning is necessary. First and foremost, you have to know when stuff is happening. Many of the things that happen beyond earth’s atmosphere take place on a fairly set schedule. Yes, gamma ray bursts, rogue asteroids, and the like are not on a cosmic time clock but the orbits of known objects really are very predictable. So where can you find out if, when, and how much of the lunar eclipse is visible for you? My favorite spot is the Time and Date website. You just enter your location and it will give you all of the facts you need to know in plain English (mostly). Many sites will give you event times in Universal Time Coordinated (UTC) but Time and Date keeps it in your local time zone. It also will let you know when specific phases of the eclipse will happen such as when the penumbra, partiality, and totality, begin and end. 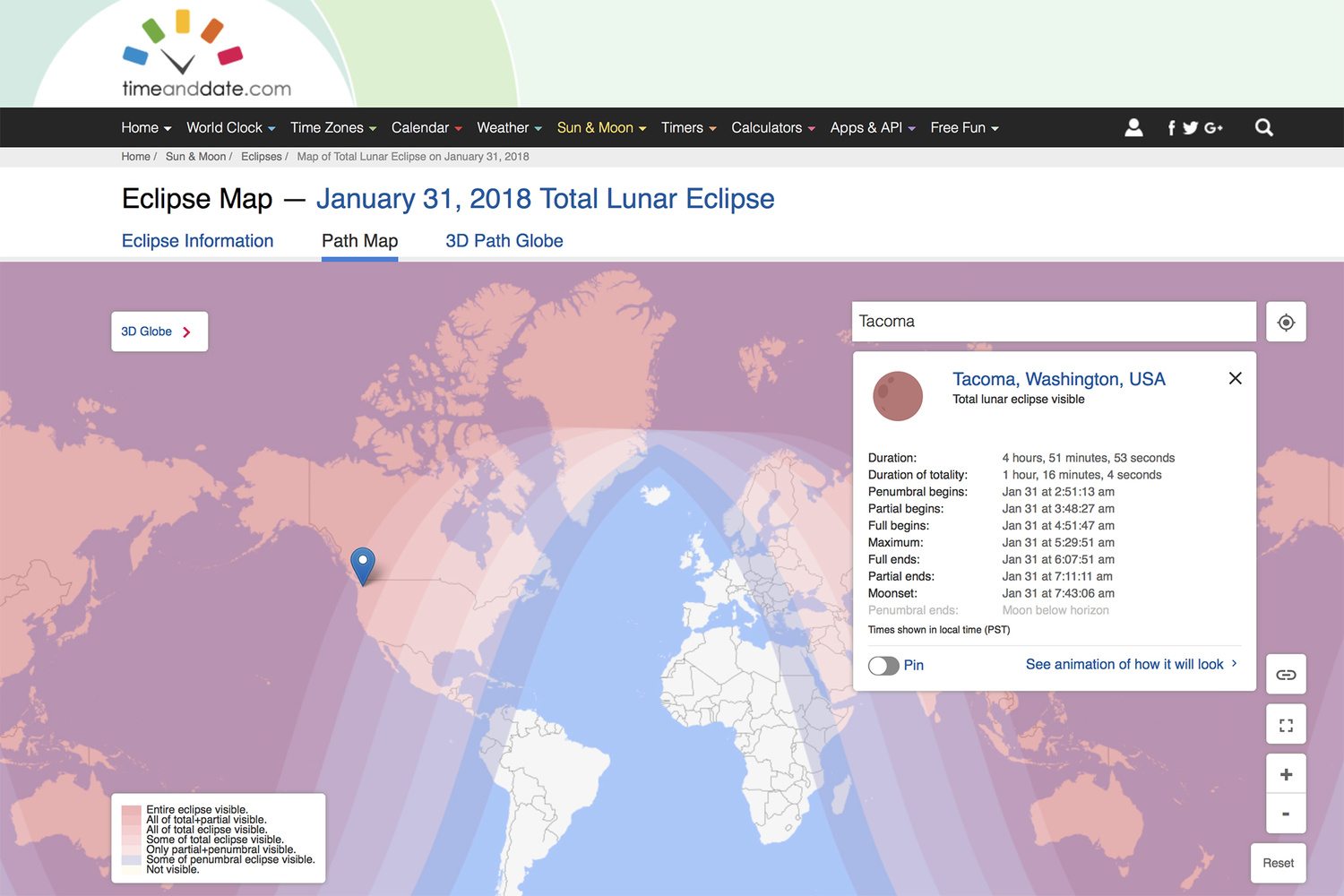 The weather is another important consideration when you are drawing up plans. Obviously, if it is going to be mostly cloudy during the eclipse, you may want to consider scrubbing the mission. As I discussed in the first tip, make sure you are prepared for your local weather conditions since you will probably be out in the elements for an extended amount of time. The January 31 eclipse will last almost five hours from start to finish.

With those two issues out of the way, the next thing to focus on is actually getting the shot. For this, you’ll want to have a good idea of where the moon will be in the sky as the night progresses. There are a number of websites and planetarium applications that will help you with this. My favorite is Starry Night. It is relatively inexpensive, fast, and easy-to-use. It is also an excellent tool for planning your next meteor shower outing as well. If you are thinking of taking wide-field images of the eclipse with interesting foreground elements, another application might come in handy. Short focal length shots can be especially challenging since you’ll typically be trying to compose your foreground together with the eclipse. There are a number of excellent tools available to help with this but my go to is PhotoPills. It has a myriad of excellent features but the Planner is where I spend 90 percent of my time since it gives me the exact direction of the moon, sun, and Milky Way for any time during the night. 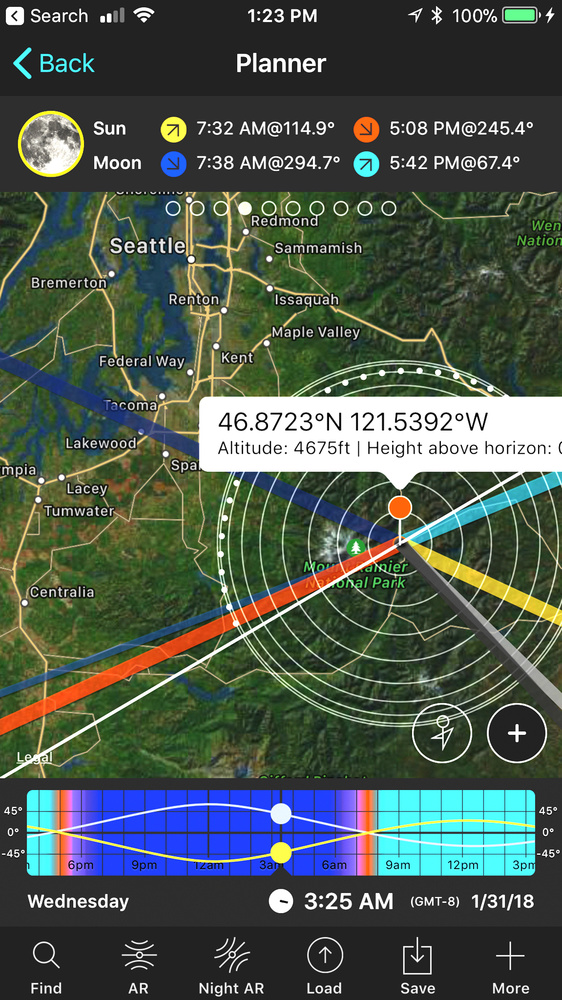 Now that your gear is ready and you know when and where the eclipse will happen, it is time to plan for the specific shots you want to get. There are two main compositional questions for you to think about: do you want a close-in or a wide shot of the eclipse? Of course, you can do both too, depending on how many camera setups you want to try to manage. This is an important question to answer since it not only dictates the gear you need to bring but also whether you have to travel or not.

Let’s talk about zoomed shots first. One potentially positive aspect of shooting the eclipse with a tight shot of the moon is that you can take it from your driveway. Since the foreground isn’t important, you’re really just looking for a location with the best sky quality possible. For this type of shot, you’ll want to use at least a 200mm lens. At such a long focal length you will not be able to leave the shutter open for more than a second or two without haven’t a blurry shot of the moon. But, to capture the dark reddish moon during an eclipse, you’ll probably need to leave your shutter open for five seconds or longer. See the gotcha? To solve this conundrum, you’ll need to invest in a tracking mount. While much more complex to set up than a static tripod head, it will keep the moon perfectly in position for as long as you want. What’s especially nice about shooting this total lunar eclipse at a long focal length is that the Beehive Cluster will be in the field of view of the moon with up to a 300mm lens on a full frame sensor camera (see image below). 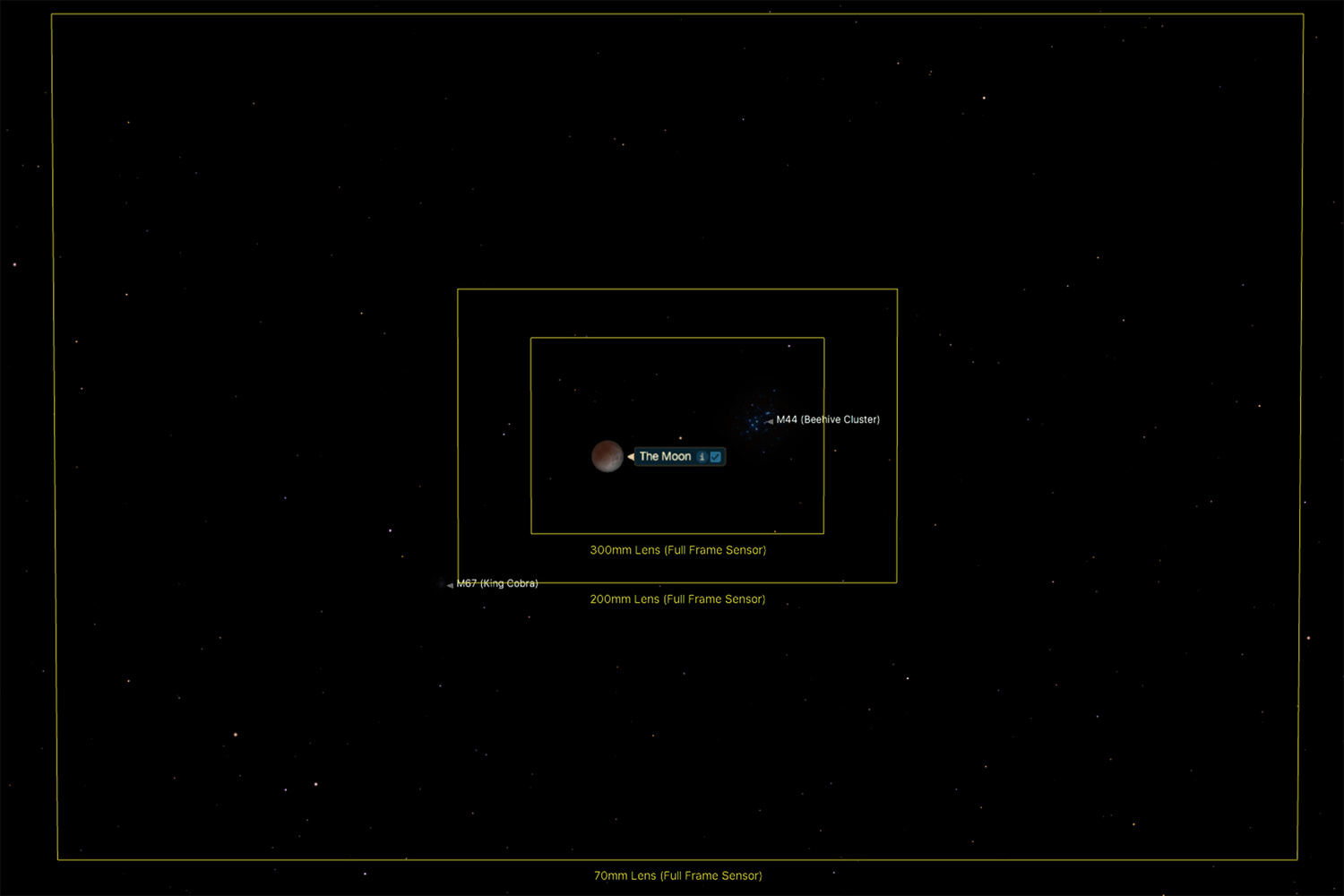 Wide-field shots of the eclipse are technically easier than telephoto ones but that doesn’t mean they are a walk in the park. Of course, the composition of the eclipsed moon in conjunction with your foreground is paramount. As with telephoto shots, you will likely want to do bracketing of your images to make sure that you are exposing properly for the extreme dynamic range of the eclipse. This is most evident during the partial phases when the eclipsed part of the moon is a dark red while the part of the moon in sunlight or in earth’s shadow will be relatively much, much brighter. With wide shots, you have more latitude on shutter speed, meaning you can leave it open longer with less chance of blurring. 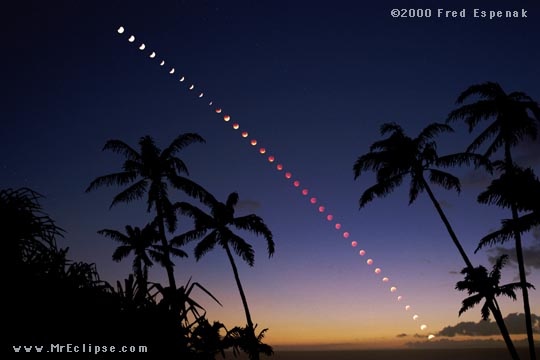 4. To Track or Not to Track

Tracking mounts give you a way to stay on a celestial target for an extended period of time without having to adjust the positioning of the camera. This is accomplished by aligning the right ascension axis of the mount directly with the north celestial pole. By polar aligning the mount, the camera will rotate in sync with the rotation of the earth thereby keeping whatever you are pointed at in the same spot in your pictures. It sounds more difficult than it actually is in practice, although you certainly don’t want to be doing it for the first time on the night of the eclipse. If you are shooting a wide vista foreground with the eclipsed moon hanging above the landscape, there is no need to worry about using a tracking mount. The same is true if you plan to composite multiple wide-field shots to show how the moon changes over time during the eclipse. The two types of shots that would require tracking are long focal length captures at over 200mm and in-close time-lapse movies of the eclipse. 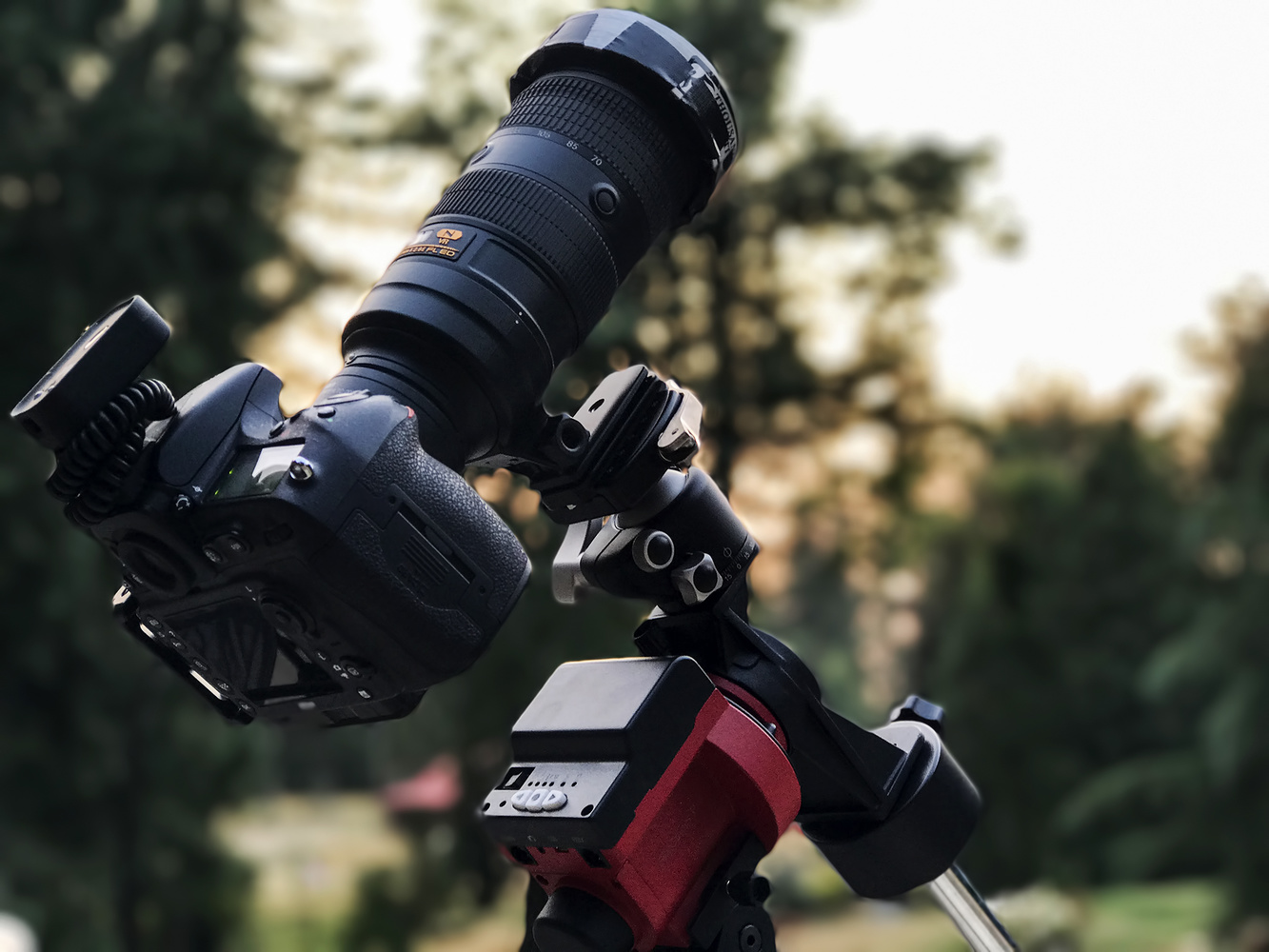 5. Have a Great Time

There can be a lot going on while you’re shooting an eclipse. It’s probably about a tenth as busy as photographing a total solar eclipse but it can still be a bit hectic nonetheless. As you go through the planning, setting up, testing, and actual shooting, take time to enjoy what you’re doing. It should be fun. Otherwise, what’s the point? And, if you do happen get on site only to discover that you forgot a critical piece of gear or something broke, just put the camera gear away, sit back, and enjoy the show. You’ll have another opportunity to capture a total lunar eclipse a year later, in January 2019. 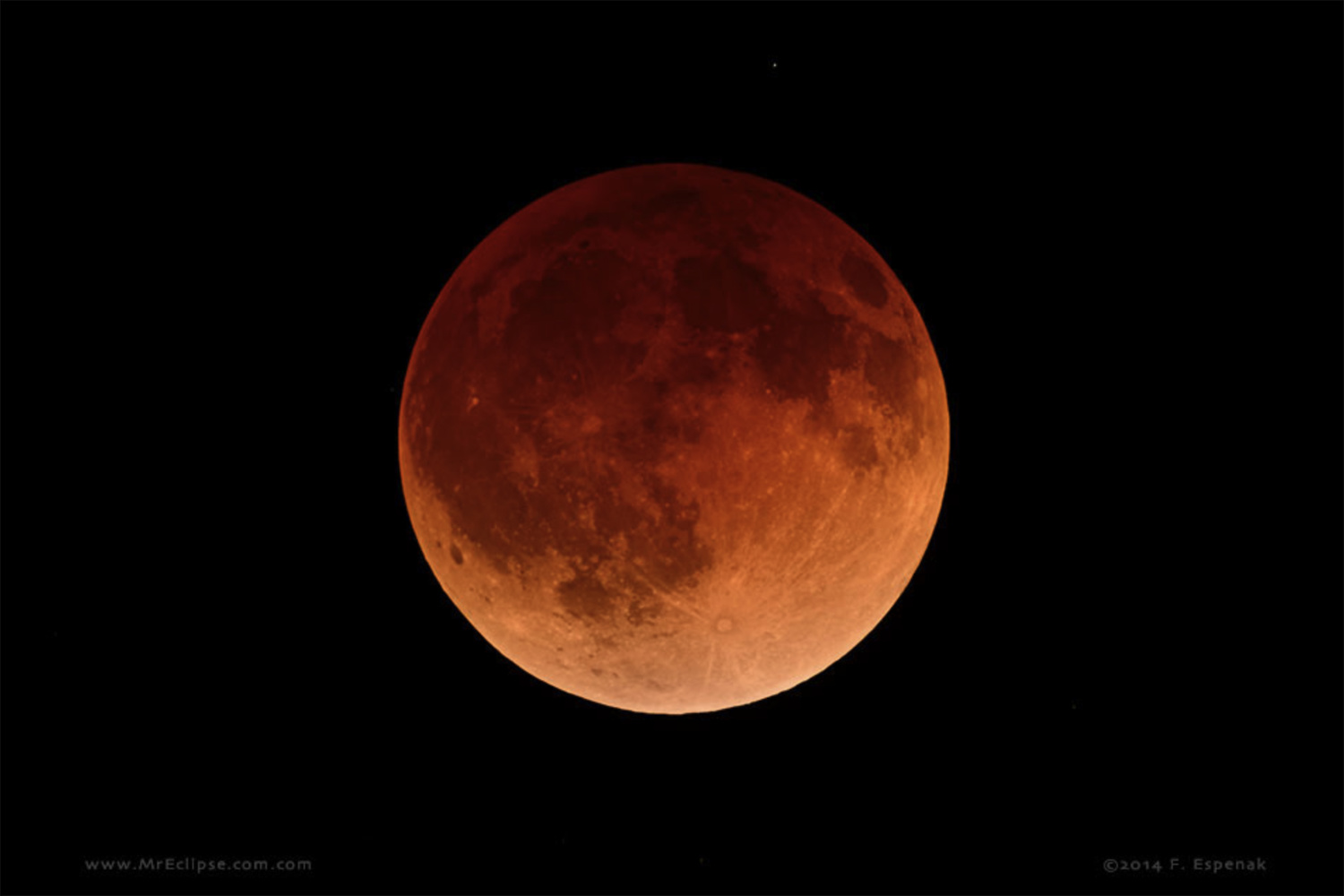 All lunar eclipse photographs used with the permission of Fred "Mr. Eclipse" Espenak.

Education / October 1, 2019
The Art and Science of Photography: Color Theory

I found using Sun Surveyor more often. To me the breakdown of what you want to do makes more sense. There you have either 3D compass, or Map, or AR. You pick what you want and scroll whether you want Sun, or Moon, or whatever. In PhotoPills it's opposite, you pick Sun/Moon/Stars first, but then, once you are there, you can't select map or 3D compass, you only have AR. To do map you gotta go to a "planner". And then I don't even remember how you enable/disable sun/moon. Maybe somewhere deep in the menu. Plus returning to a "present time" requires 2 clicks - one on watch, another on "now" and it's just overall so clumsy. Sun Surveyor has better more unified UI, I think. But both are great and both worth what they cost, which is not cheap for phone apps. $10 each I think.