Peak Design, creators of the popular Everyday Messenger, Everyday Backpack, and Slide strap, announced updated versions of its Leash and Cuff. A few weeks ago, the San Fransisco-based photography accessory company sent me the new products to test. Coming from a brand that set a precedent for commanding high expectations, I thought I knew what I was getting into. But even these little straps held a few pleasant surprises for me.

To be honest, the just-retired generation of Leash and Cuff were the only products on Peak Design's list that I always felt didn't look, feel, or function at the level we now expect of the company. The other products they've released since these initial releases were so well made, it was hard to imagine Leash and Cuff came from the same place. But today's update finally lets these two products join the rest of the lineup at the highest level of form and function. 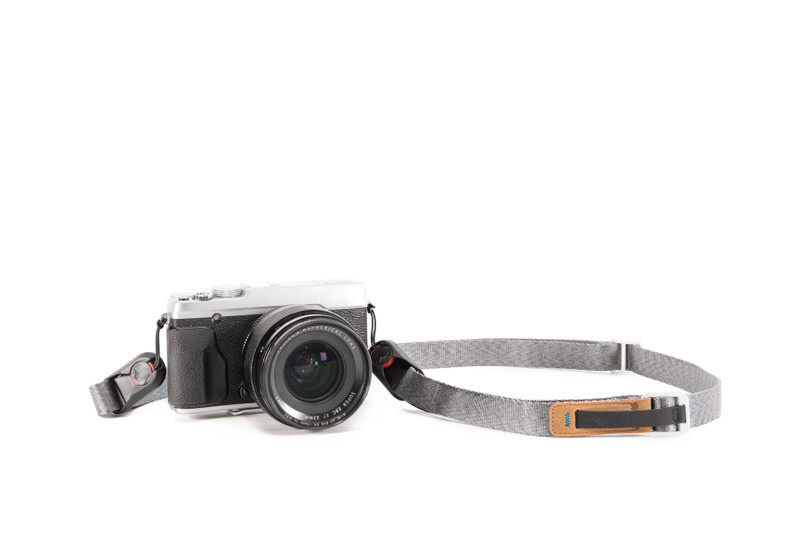 Leash can best be described as a narrower, slimmed-down version of the brand's flagship mirrorless camera SlideLite strap. However, Leash is more than just a small version of Slide. While the materials might seem similar at first, it's clear that it's a fresh redesign fit for a slimmer profile all-around to better match the cameras that you might use it with. The new Leash features a number of changes in materials, adjustment mechanisms, and even anchor connectors. Here's a quick new feature list: 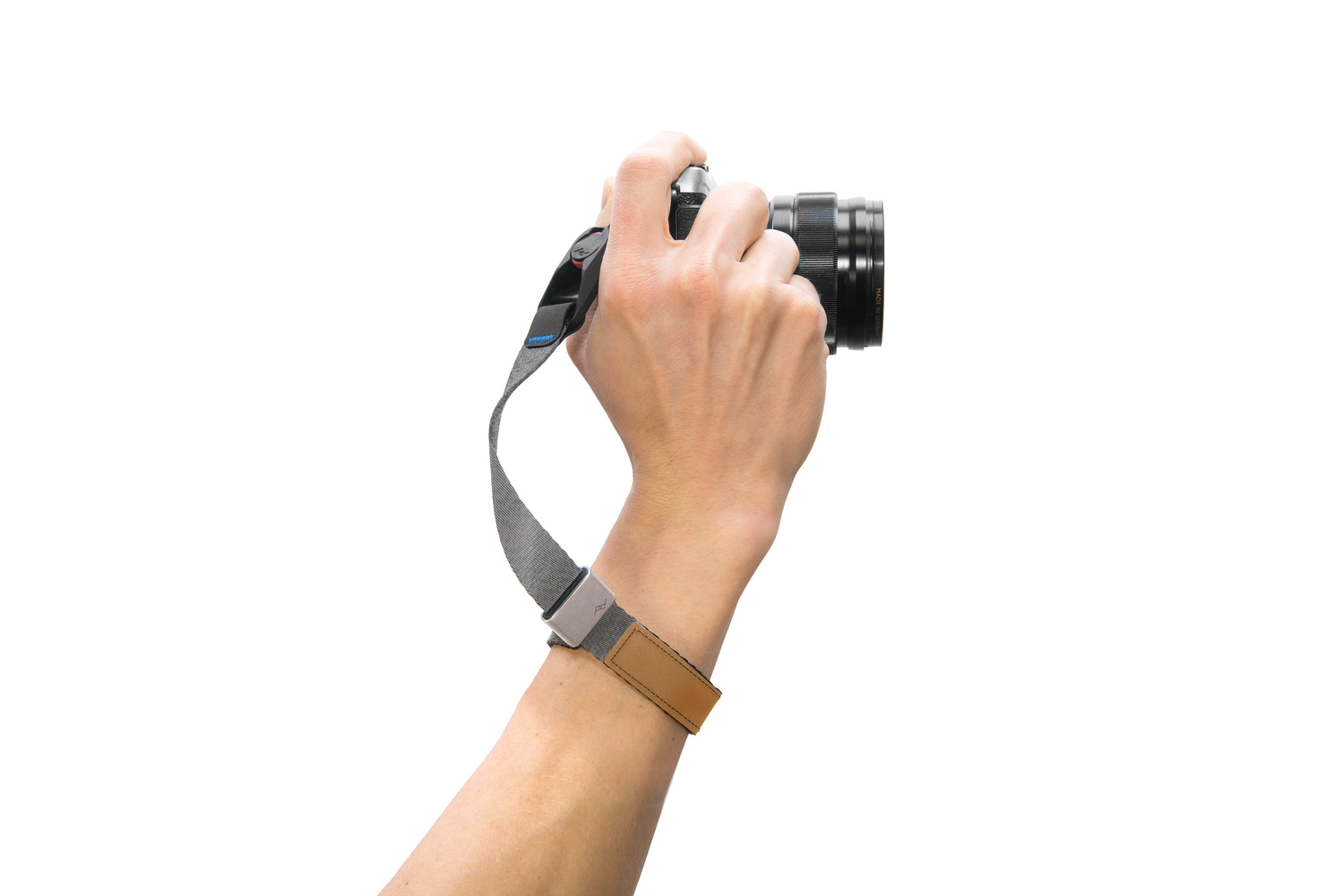 Cuff, on the other hand, is an easy-to-use, easy-to-stow wrist strap for any camera. The original version had a similarly uninspired adjustment buckle, but it's obvious this new version, as with Leash, was redesigned from the ground up. A sleek aluminum adjustment slider slings into position snugly against your wrist when you give it a tug to tighten. Undo the anchor connector on the camera, and the loose end can now be wrapped around and magnetically secured for neat storage on your wrist so it's there when you need it later. Here's a quick feature list of Cuff before we dive deeper into each strap:

I'll admit right away: between the two, I have a favorite. And it's Cuff. I'm a strap hater. They get in the way of my shooting, swing around all over the place, etc. More often than not, you can find me one-handing my camera and trusting that fate will have me drop it when I can afford the consequences and no sooner (so far, so good). It's not smart, but that's why when I do have a strap on my camera: it's the original Slide, which can quickly be removed thanks to Peak Design's snapping anchor system. But still, I almost always take Slide off within minutes of arriving on scene, as soon as I've surveyed the area and decided on the two lenses upon which I'll be most heavily relying for that day. 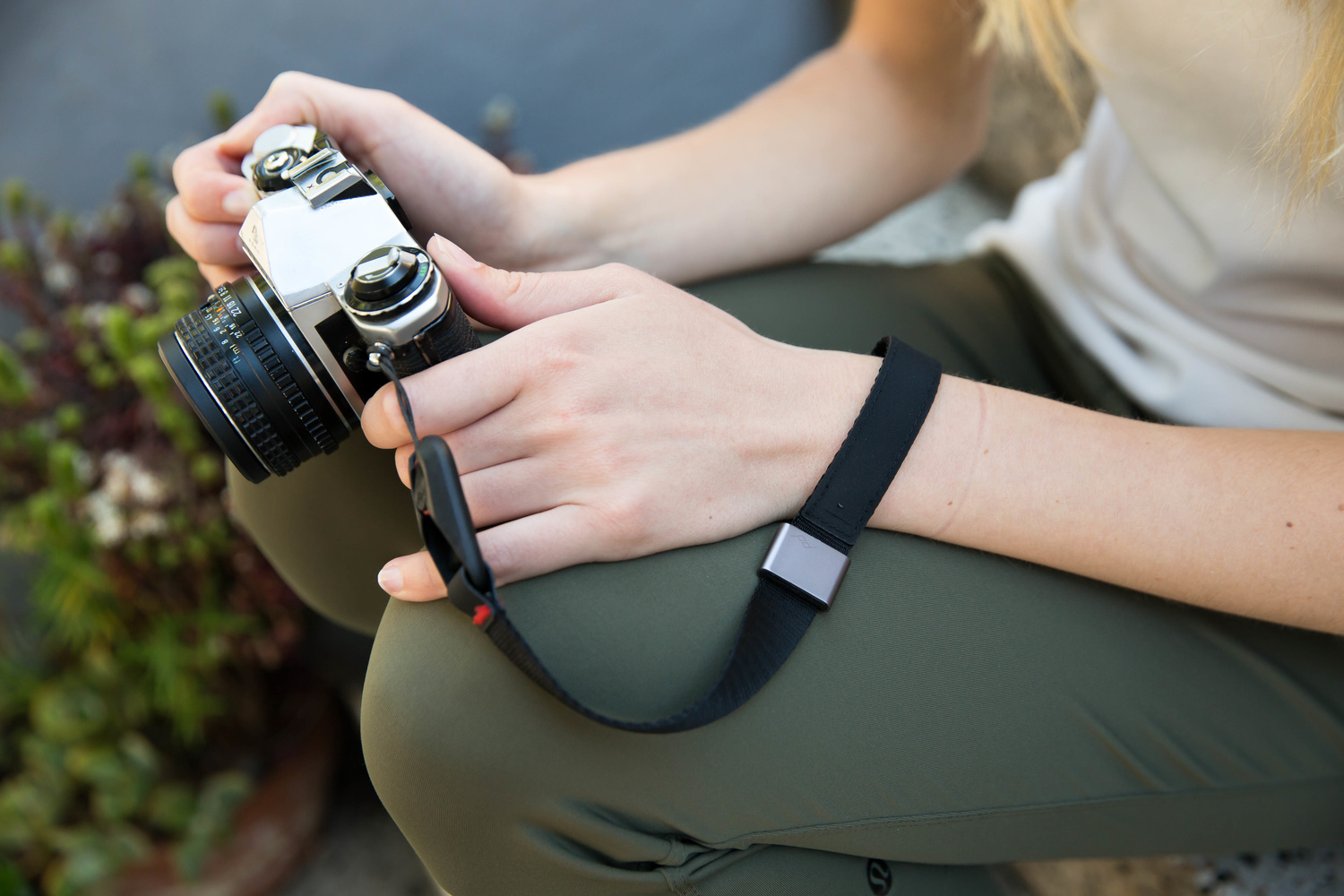 Enter Cuff. Hand straps such as Peak Design's very own Clutch have been tempting, but they're bulky when I want to grab the side of the camera and are just one more thing for me to get my hand into every time I pick the camera up. Cuff, however, can be likened more to a surfer's leash, not to start confusing the product names here. We're still talking about Cuff. You put it on and forget about it while it keeps your gear where you need it all day long.

Cuff attaches to your camera at a single point with one anchor connector. The other end slips around your wrist. Then, pull your wrist away from the camera to quickly cinch the sliding metal buckle down to the edge of your wrist. Now you're ready to shoot. 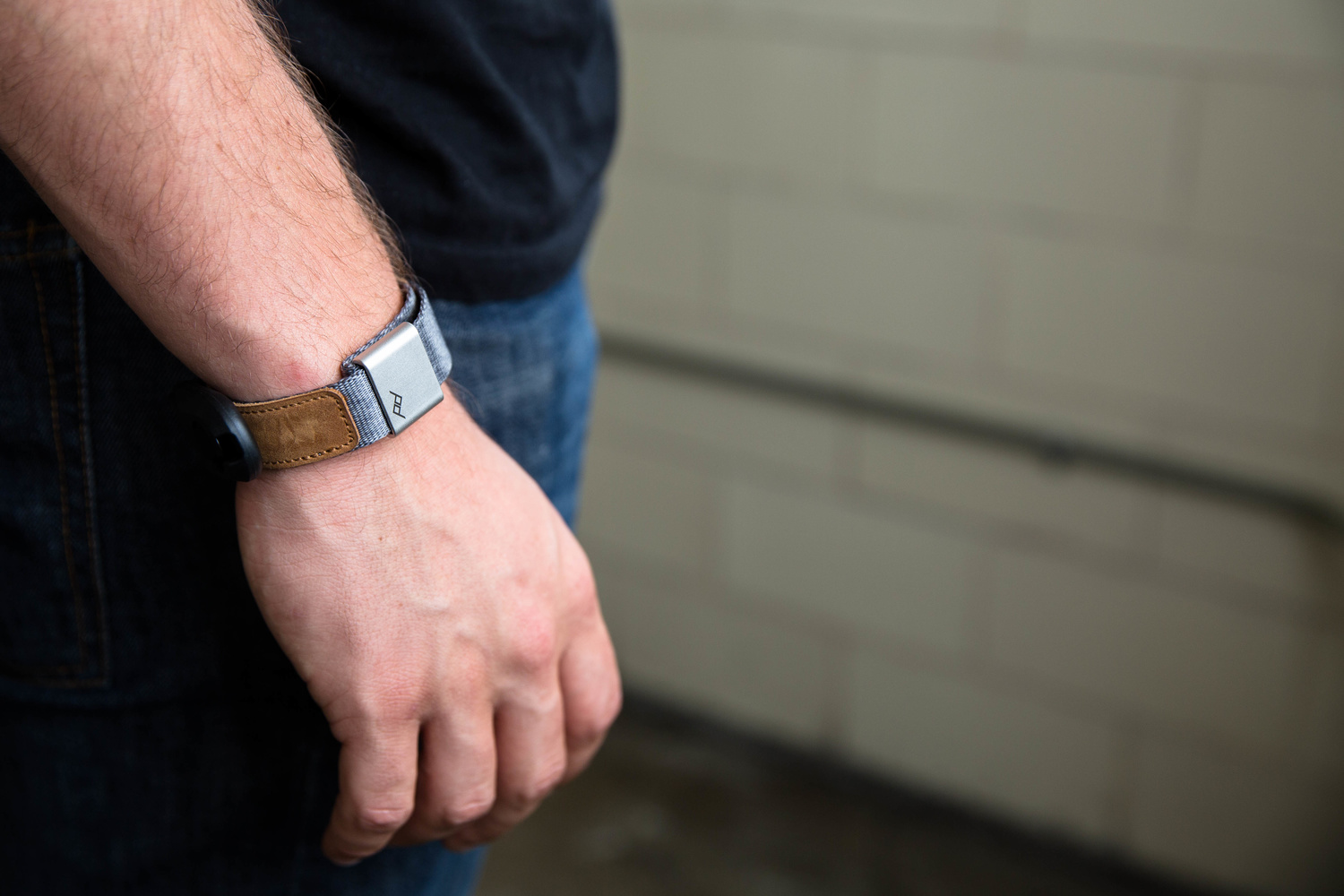 The absolute best part about this is the way you handle Cuff when you don't need it. I once lost a Slide after an event because — as usual — I was frustrated and threw it down on a chair, only to forget it during the flurry of guests leaving and thanking me. But with Cuff, once detached, the end of the anchor connector magnetically secures to the rest of Cuff not too much unlike your girlfriend's double-wrap bracelet, but cooler (because it's a camera strap, of course).

I wouldn't necessarily wear this around all day as a bracelet, but it's worth noting that Cuff isn't an entirely terrible look for the day you are using it. The anchor connector might be a little thick for fashionistas' tastes, but it stays put and works incredibly well. Best of all, Cuff will be handy when you feel like using it again a few minutes later. It's so lightweight that I forgot it was on (my girlfriend had to suggest I might want to take it off when I sat down for dinner after testing it all day). If the small, embedded magnet isn't in the perfect position to hold your anchor point around your wrist, a quick pinch on the side of the strap and a push from the back will slide that magnet to the right position within the strap. If that's not too clear (I don't blame you), it's a lot like squeezing that last Lifesaver out of the wrapper.

While SlideLITE does a great job handling smaller cameras, it's Leash that is certainly the most compact, full-length strap. Leash also features dual adjustment points made with new hardware. A one-handed pull on a loop tab allows the strap to loosen up. Swing the strap back behind you and give the loop a tug in the opposite direction and it cinches right back up to fit snuggly across your body so you can chase the sunset with the camera safely by your side. While the Slide and SlideLITE's proven adjustment hardware works very well, it's hard not to like this just a bit more for its simplicity. You don't need to undo anything (even though the alternative is just a simple flip or lift as well) in order to adjust the strap. Just tug one way or the other. Simply put, it's nicely built. 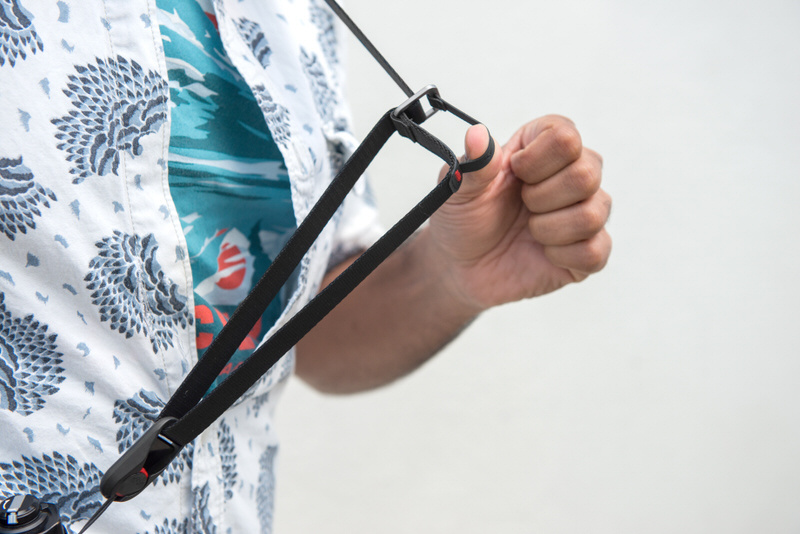 Leash is a bit narrower than the SlideLITE, so it won't distribute weight quite as well as the more premium strap (and certainly not as well as Slide), but in my experience, there isn't that much of a difference in order to gain the added portability and lighter build. Leash also picks up Peak Design's latest design cues, coming in both all-black and the new ash scheme that matches the same tan leather accents, blue stitching, and ash-grey nylon coloring as the bags of the same scheme so your whole setup can match. 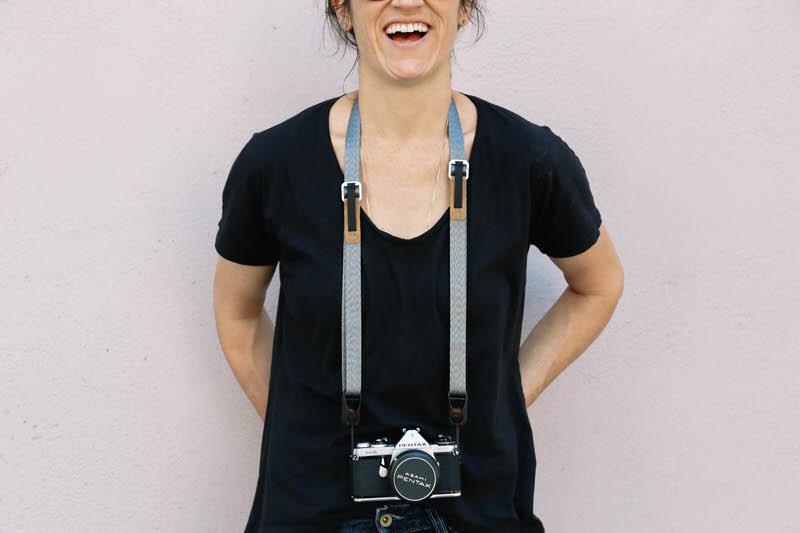 Peak Design has already gone through a handful of anchor designs. I only now replaced the very original ones with these third-generation anchors on my camera. While they're still made of the Dynemma-corded material that won't wear as easily and that will warn you when they're wearing too much by exposing a red-colored core, the new anchors included alongside Leash and Cuff are even thinner than the previous generation, which now lets them loop through almost any camera's eyelets (great for smaller mirrorless or point-and-shoot bodies).

They're also slightly smaller at the connection point. The new plastic ends are tapered, which makes sliding them in and out much easier, although they stay put just as securely. The older anchors were so good they didn't really need updating, but it's nice to know Peak Design is always working on improving even the smallest features, and even when we don't think they need to. The new parts do work better overall, especially when considering smaller camera owners can now use them without first threading in other, almost certainly less safe intermediates. I'm certainly not complaining.

honestly i love the old leash and cuff. i have two cuff's i keep one in my camara bag incase i lose the other and the leash is so low profile.

I've using the original Cuff for more than 18 months. It's absolutely great and made me forget the neck straps. I have a spare one as well.

Does the job. However, be carful with the Anchor Links, as they rub against your camera body when in the bag, and create a lot of marks and cosmetic damage that depreciates your camera greatly. I had to buy a new battery compartment door just because of that, and I was lucky I had an L-bracket on at the time, so it didn't damage the whole base of the camera body.

That's unfortunate, but strange. I've never had this issue and almost exclusively use their line of straps, now.