Color grading is one of the most powerful tools you have when it comes to elevating your images and video. One of the most frustrating and intimidating things about working with color is that it can often feel tedious and un-intuitive. Video editors often employ physical editing panels when color grading their work and now Tangent, one of the leading makings of video editing hardware have brought support for Capture One Pro 10 to their system.Tangent was kind enough to let me borrow their entry-level Ripple panel as well as the complete Element multi-panel system to try for a while and I was skeptical at first (the price tag on the full Element system is currently just over $2800 from B&H) but I was very quickly won over as you'll see below. 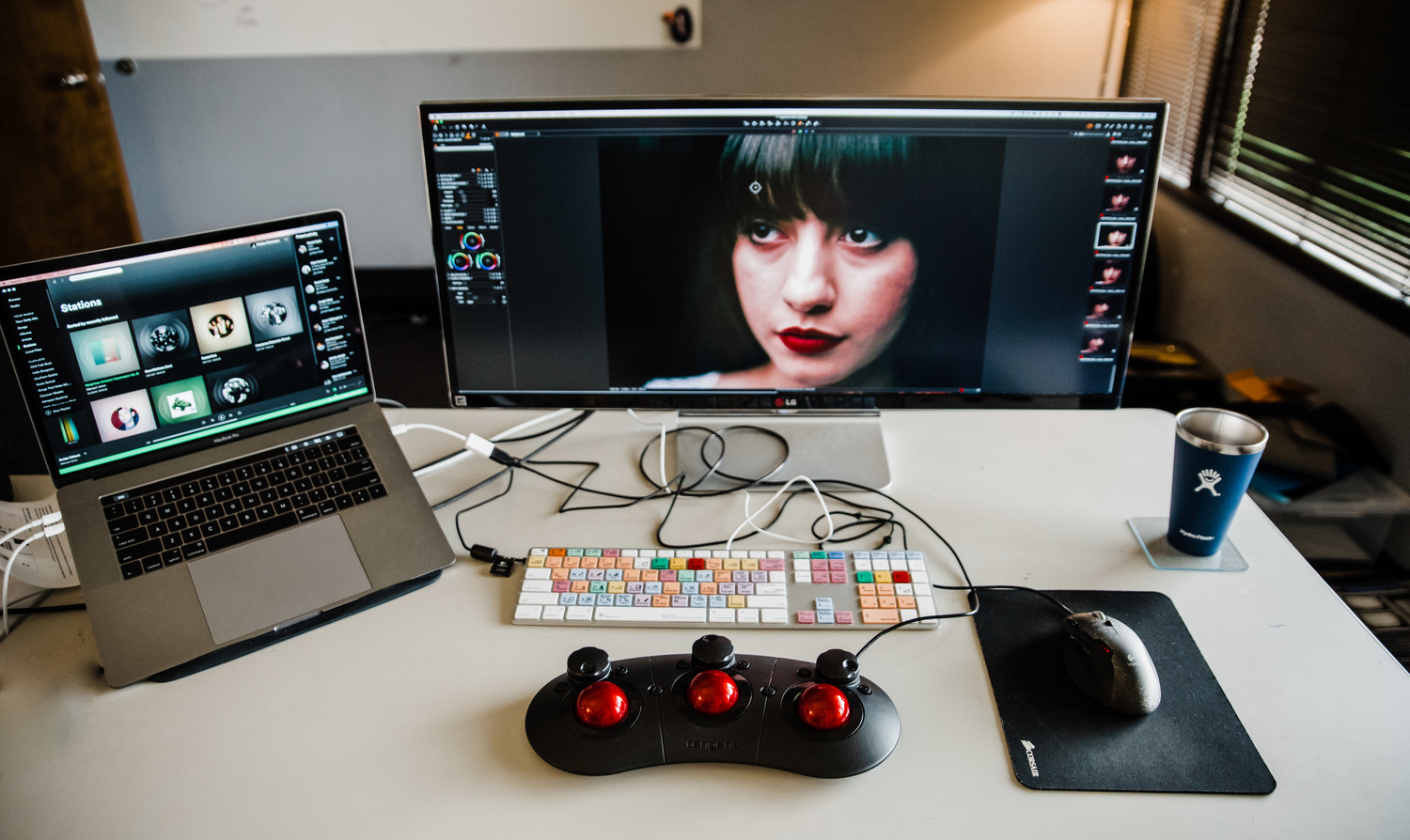 We'll start with the Ripple, though the Element and the Ripple are not fundamentally all that different. As you can see in the photo, the Ripple is fairly small, not quite as wide as a standard 10-key keyboard. It's made entirely of plastic so it's fairly light and, while it does feel well made, you do definitely notice that you are working with a piece of plastic hardware and not something more robust. 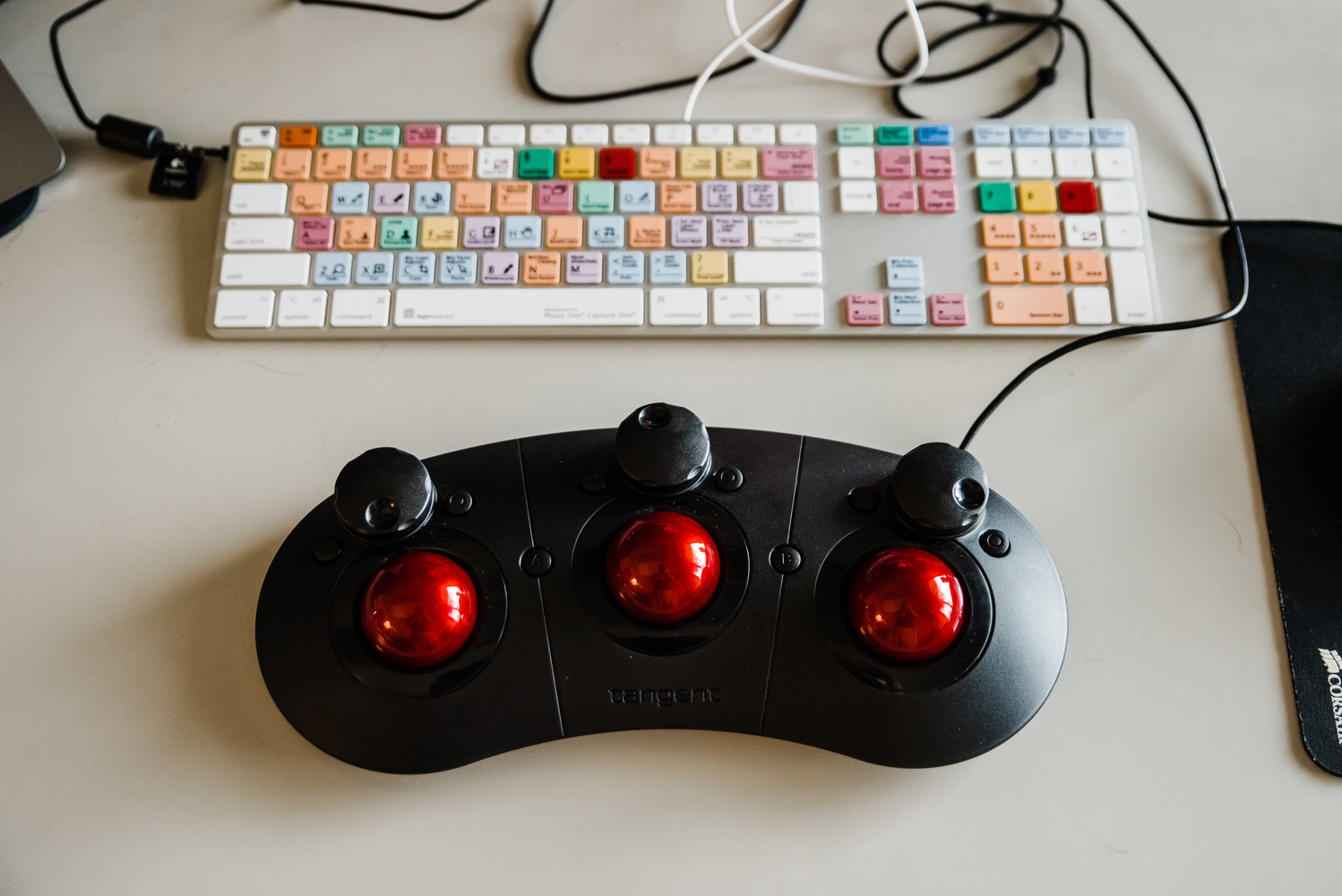 The most obvious feature on the Ripple are the three red trackballs which is fitting, as these bad boys are going to be where the majority of your playtime happens. There are also three corresponding jog wheels at the top of the panel, and smaller secondary buttons. From left to right, the three sections are configured by default to handle Capture One's color tools in the shadows, midtones, and highlights, while the jog wheels control the lightness tools. 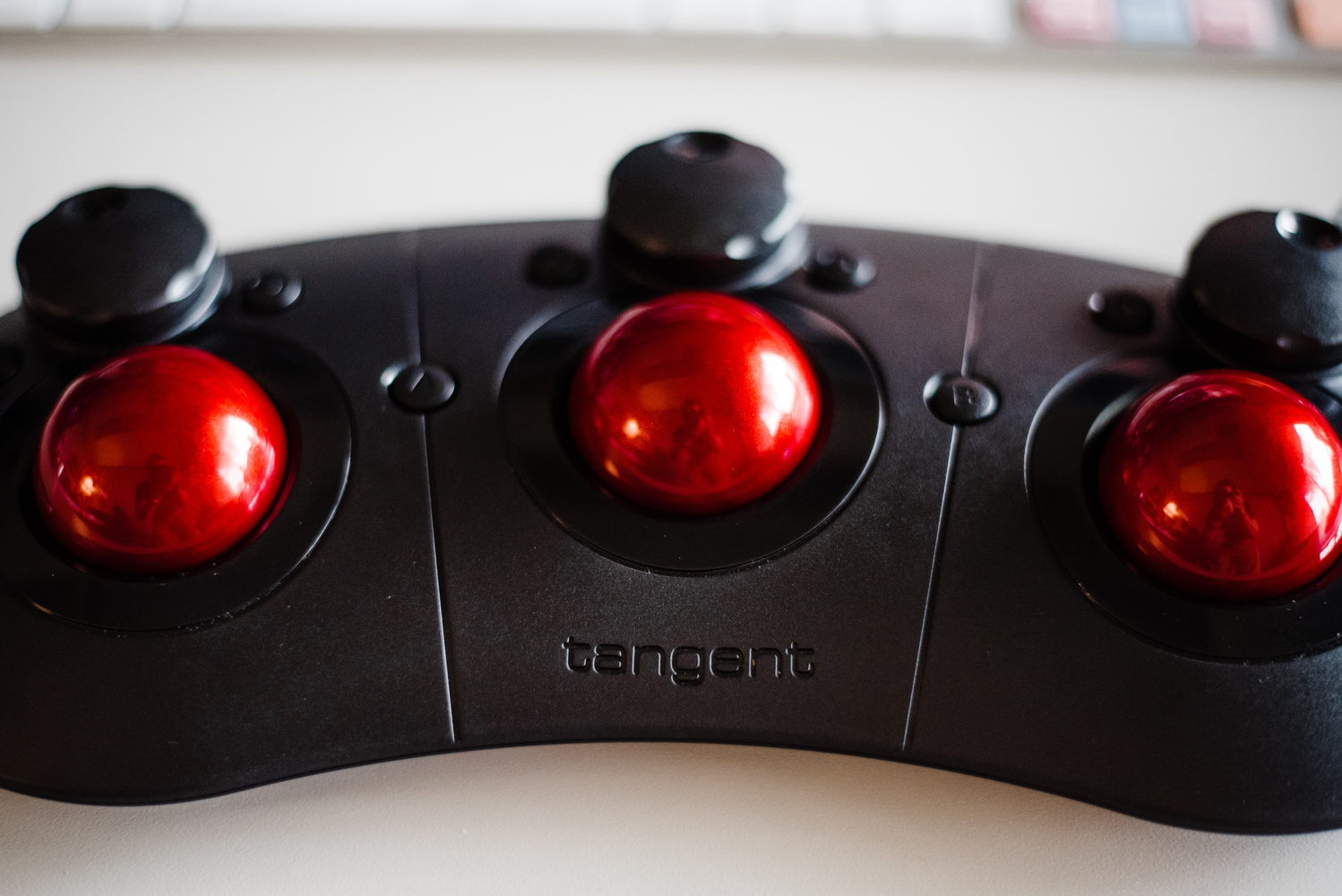 You'll notice the "A" and the "B" buttons sitting between the trackballs. The "A" lets you trigger and alternate function for any of the controls as set by you in Tangent's dead-simple mapper software, while the "B" button changes the bank of controls you are currently working with. A bank is simply a layout for controls that you've set up in Tangent Mapper, so you could have a color editing setup, a culling setup, etc. and jump between all of them just by tapping "B." The Tangent software also has this neat little HUD window that can float over your workspace on your screen so you can see what bank you're in and what each controller is currently configured to. 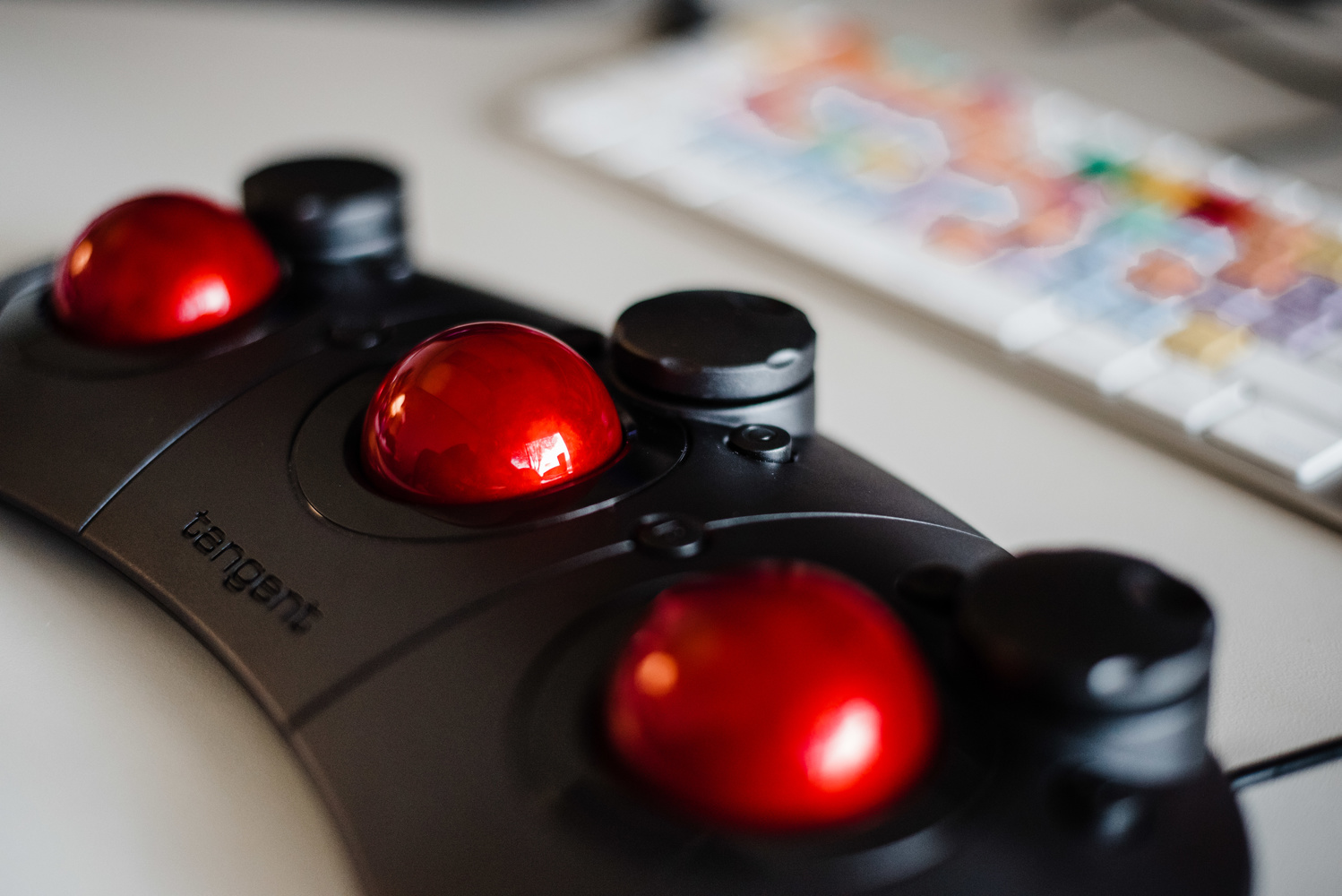 But back to those trackballs, because these babies are what make the Ripple such a fantastic little product and a game-changer for people who edit in Capture One Pro. Since each of those is tied to it's respective color wheel in Capture One, color grading instantly becomes an intuitive and seamless practice. You no longer have to click around hundreds of times tweaking and shifting the shadows, then the highlights, then the shadows again, then the midtones, then back to the highlights, and so on. You simply watch your image change as you manipulate the corresponding trackball. I wish I could get across just how much fun this is and how easy it is to jump in and play with something that can be very intimidating to a large number of photographers. Because you can tweak sensitivity and responsiveness in Tangent Mapper, you can fine-tune each trackball to just how you like it, making it as aggressive or subtle as you want. Using the Ripple instead of a mouse was so freeing and downright fun, I don't know how I'll go back to the old way of doing things (I probably won't, I'll probably buy one of these, it's so good. For lack of a better description, the experience is kind of like painting, the panel makes it tactile and immediate and I felt much more "in touch" with my photos as I edited them because of it. 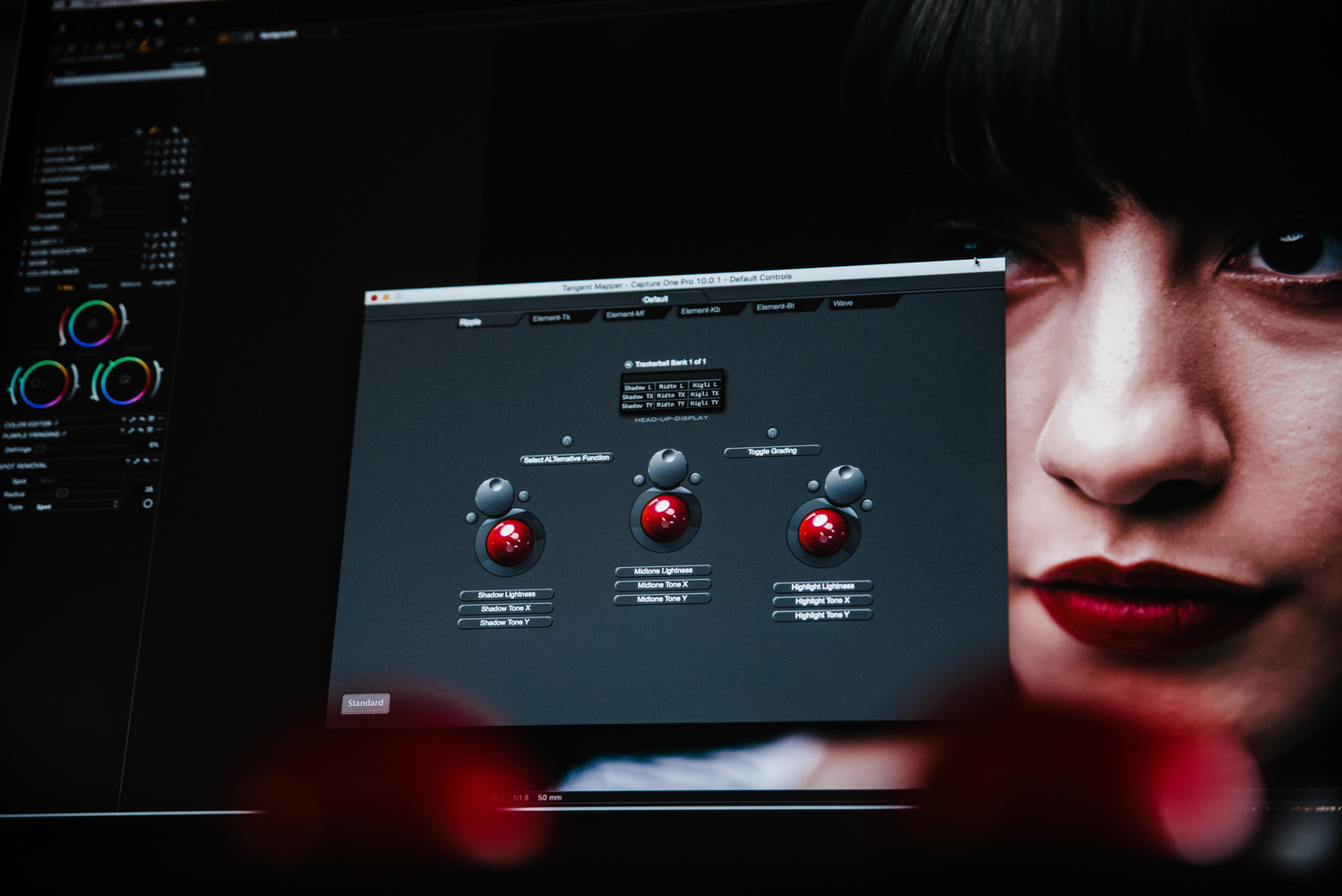 And don't forget, you aren't limited to just color grading, you can configure the Ripple to control a whole host of things and, much like Capture One itself, just about everything is configurable to set up exactly how you want it. Plus, since the Ripple is part of of Tangent's editing ecosystem, you aren't limited to just Capture One. You can set it up to work in Adobe Premiere or DaVinci Resolve or any other number of editing applications (no Lightroom support unfortunately).

Let's not forget the Ripple's big brother, the Element system. The Element is made up of four separate panels that can be used independently, as a single unit, or in whatever configuration you like. Each segment has different functionality to fit your precise needs. It also comes in this customized Pelican hard-case so you can haul it wherever your editing takes you. Oh and the build quality on the Element is absolutely outstanding. Every inch of it feels precise and futuristic and each panel has a solid heft to it that is, dare I say it, luxurious. 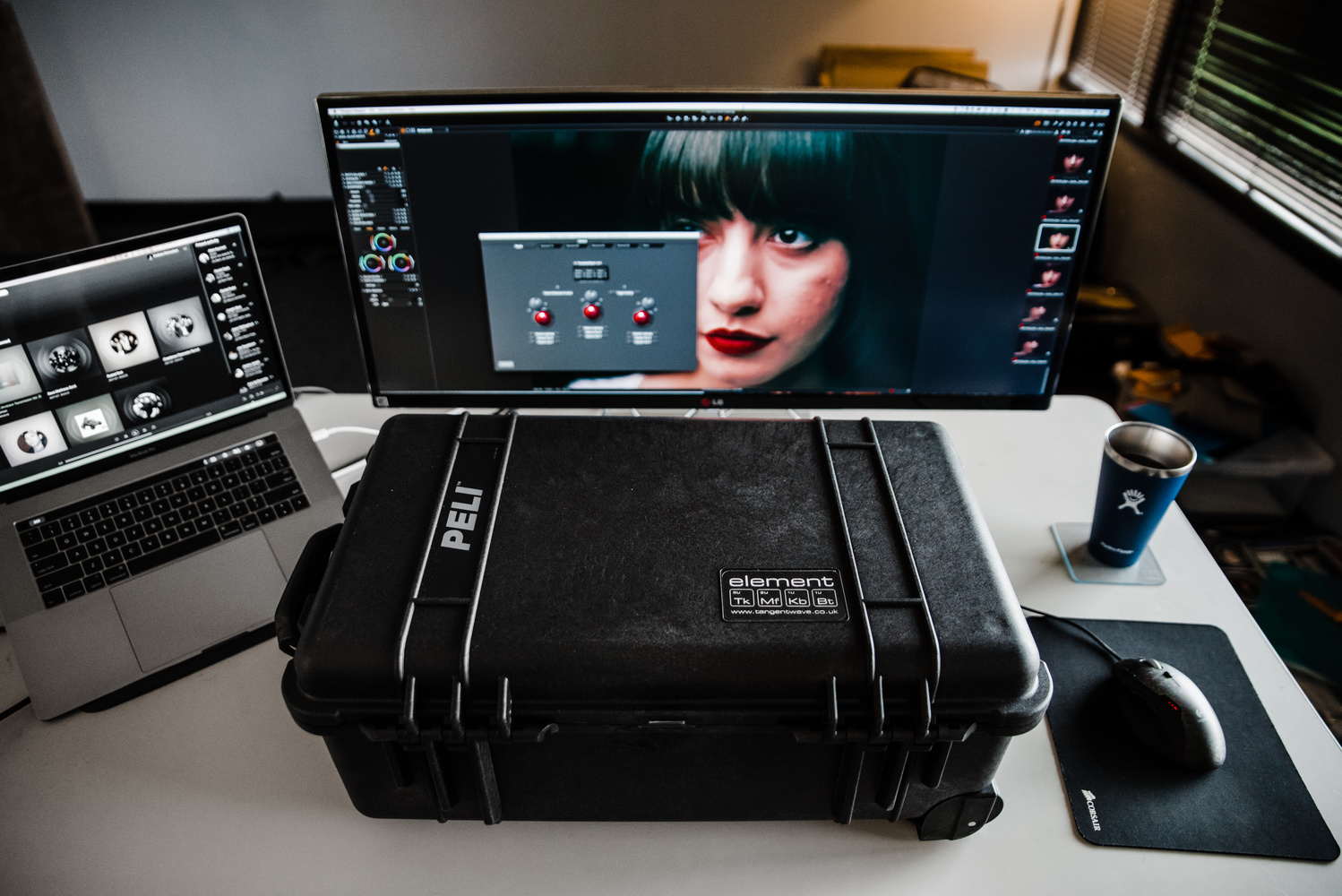 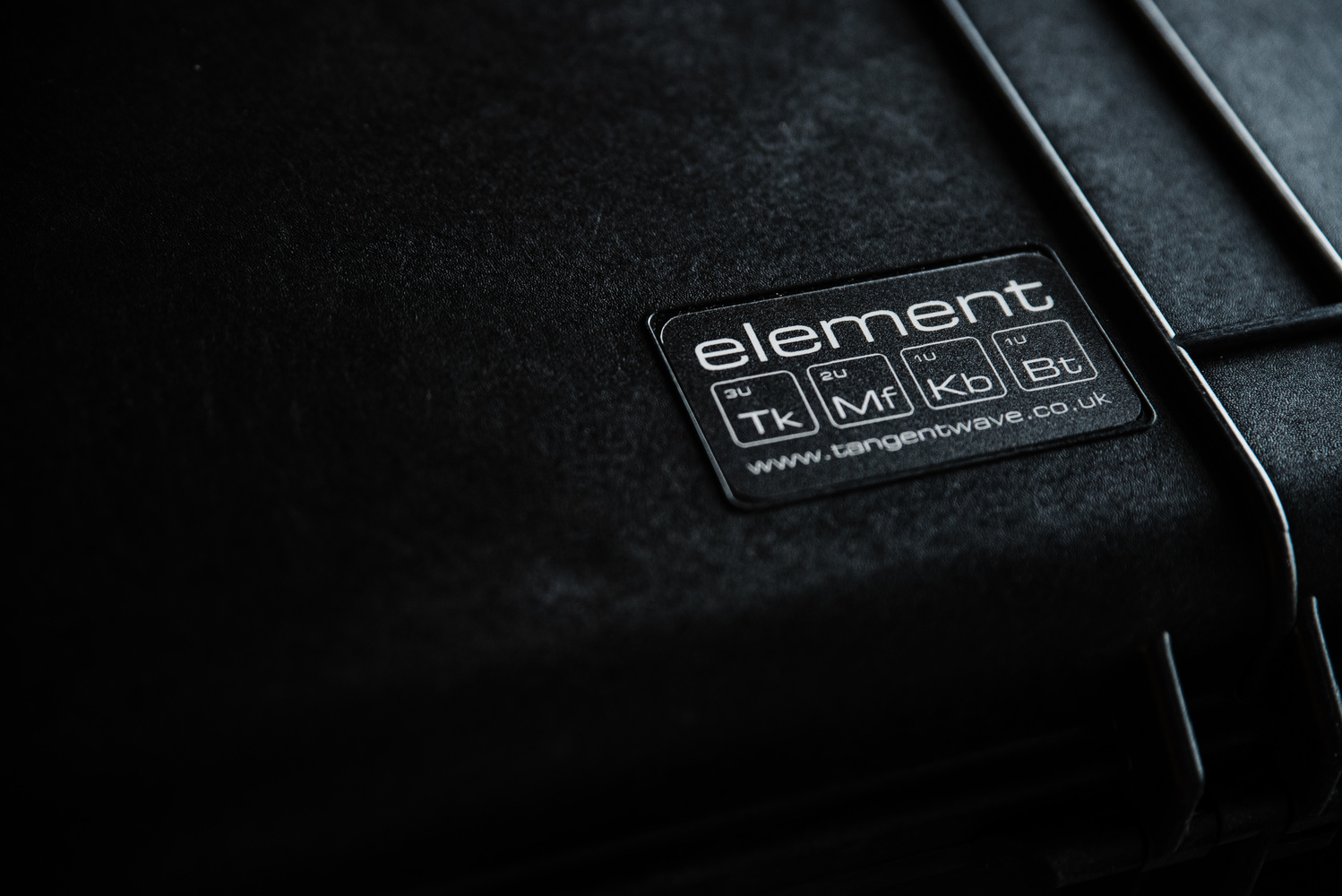 Those symbols are for each of the four panels; the Tk (trackerball), Mf (multifunction), Kb (knob), and Bt (button). The names are pretty self explanatory, but here's the whole system laid out on my desk. 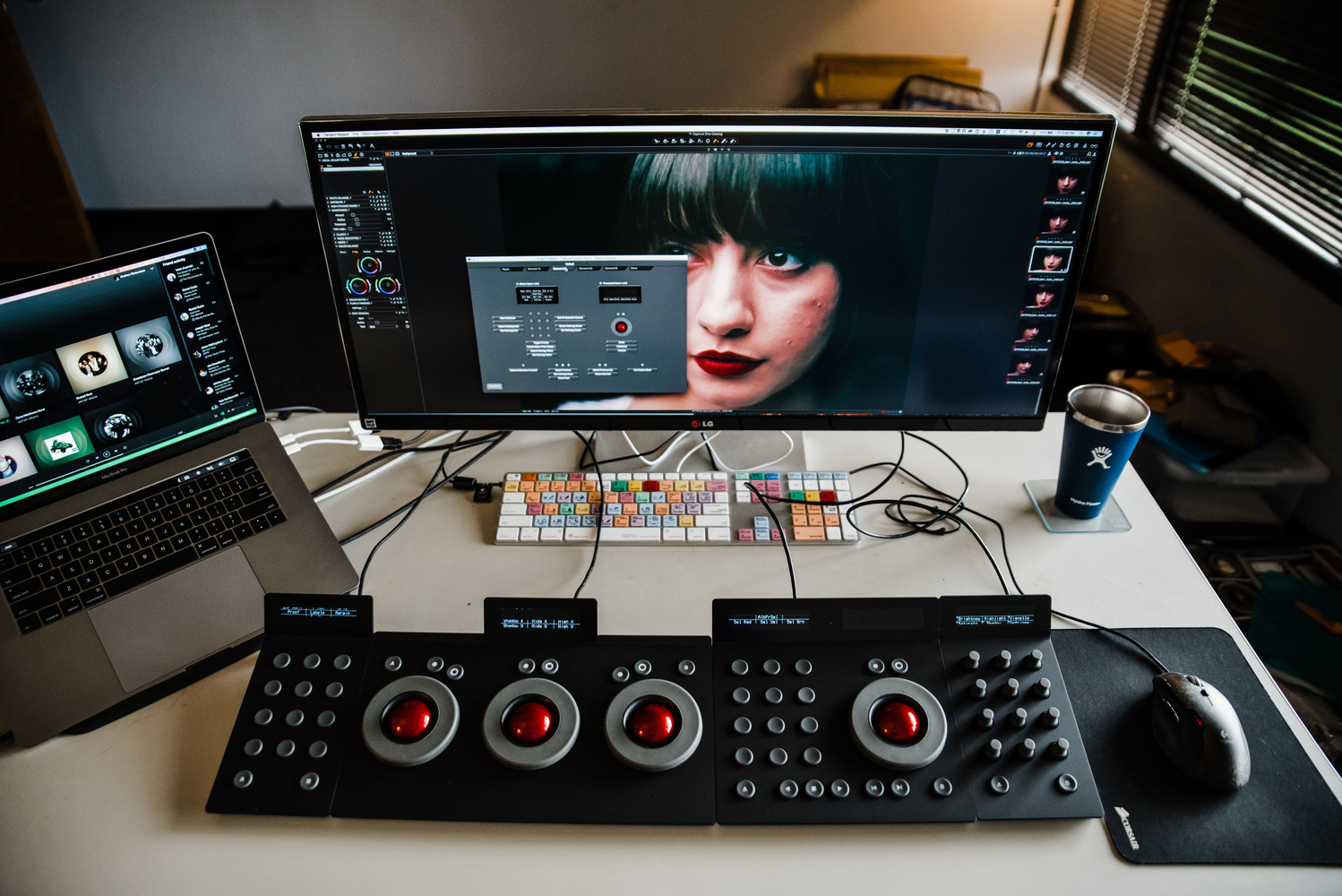 Notice that each unit has it's own dedicated USB cable. Also notice the two dongles coming out of the side of my MacBook Pro. These things not only need four USB ports to run the whole setup, Tangent actually recommends making use of a powered USB hub to run the system. My monitor functions as a hub so I ran everything through that, but it's definitely something to keep in mind if you decide to spring for the full system. The Element comes with a bunch of small metal pillars that pop into slots on the side of each unit to connect them all together magnetically. The magnets are quite strong and you'll end up needing pliers or something extra-grippy to pull the pillars out for storage. It works really well though and helps lock every panel into a whole, cohesive unit. 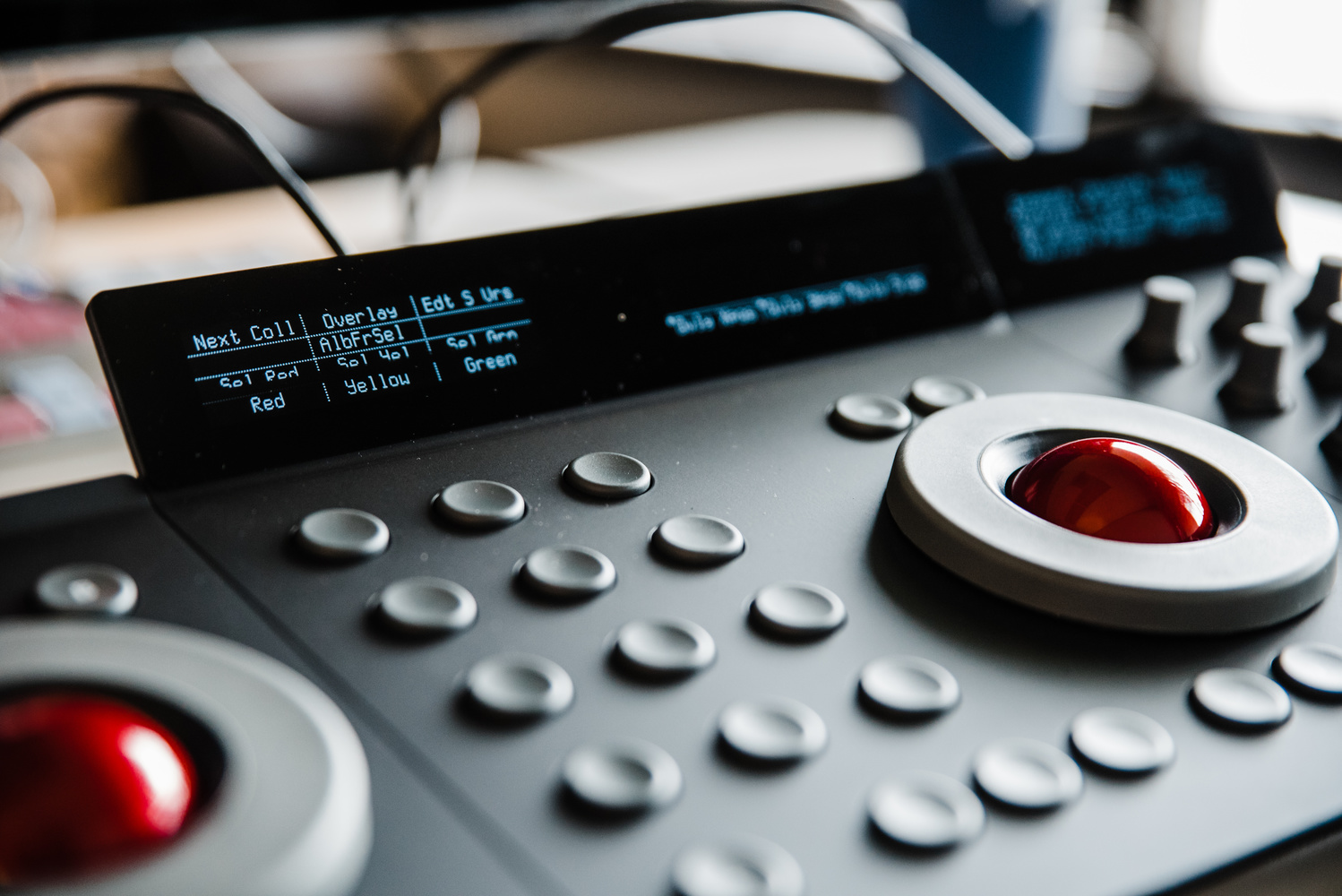 The first thing you notice with the setup is buttons, LOTS of buttons. And you get to configure each of those buttons as well as an alternate function for each button and as many banks of buttons and alternates as you want untilyougocrazyfromallofthebuttonsyouhavesetupandyouexplode!!!!

But seriously, between the Bt and the Mf panels you have over 24 buttons to play with. I found that getting everything assigned to my most often repeated actions really streamlined my workflow since everything I needed was right at hand. Not to mention the impact it made in my video editing having every tool I needed laid out in front of me.

The Kb panel is also really great as each little knob can be assigned to pretty much any numerically adjustable tool, and the display on each panel unit shows you exactly what each button/knob/wheel is actively controlling so the whole experience is incredibly intuitive. 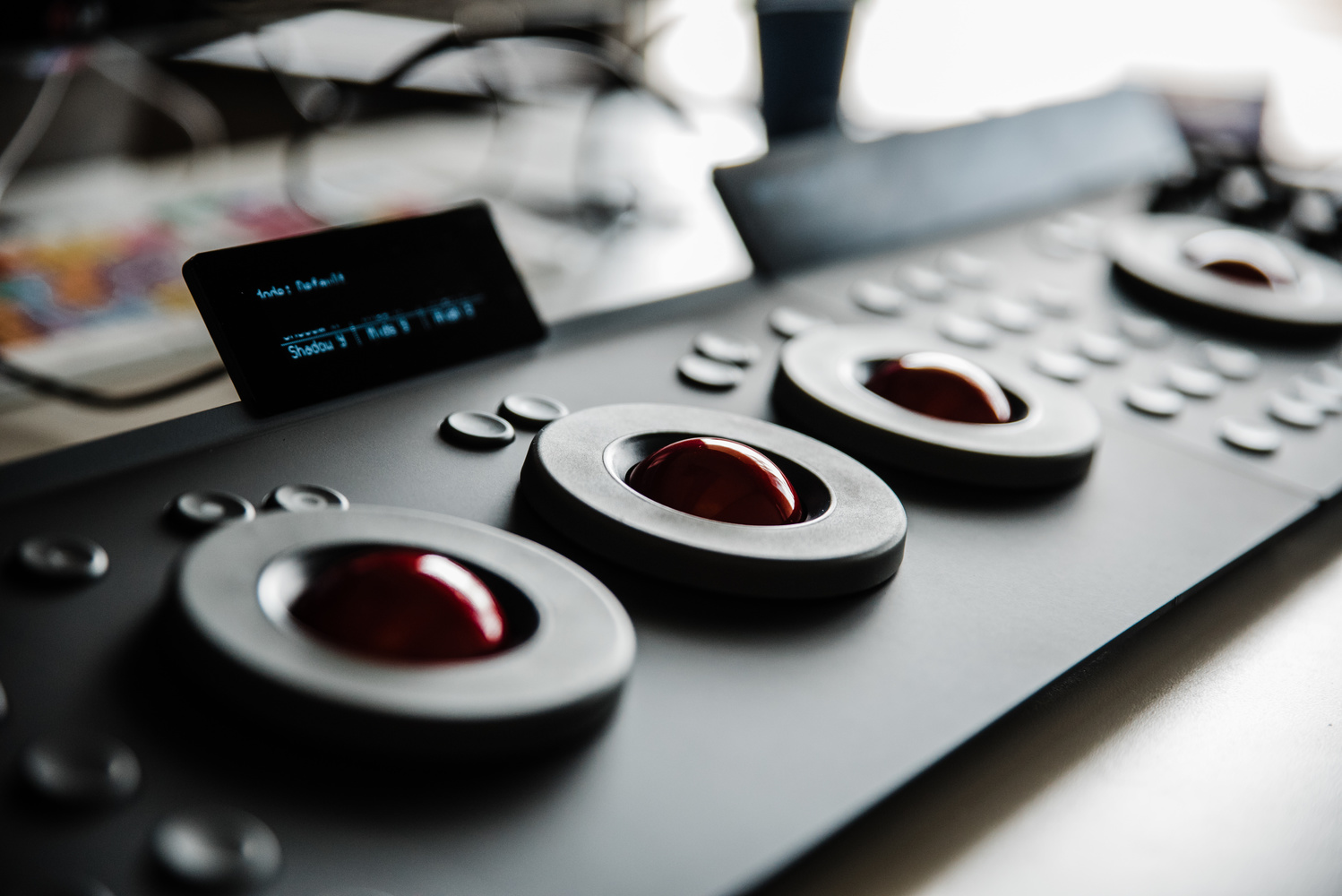 On the Tk panel, each of the trackballs has a large rubber jog wheel surrounding it, adding an additional control element to the already stellar trackballs. These too were particularly helpful in my video editing workflow, though the also performed admirably in Capture One work as well.

So Which Should I Get?

No clue! But seriously, I thought both products were awesome. If you're a high-end retoucher who does the vast majority of your work in Capture One, and has a dedicated work station set up where you can keep the entire Element system laid out and ready to go, then you might seriously consider the Element as a valuable tool for speeding up your workflow. If you're like me and you're a little more mobile (or have a smaller wallet) and color grading and editing is only part of your work and not all of it, then I think the Ripple is an extremely solid and rewarding investment.

But wait, there's a third option! Tangent didn't send me this but I've certainly had my eye on it, they also make the Wave panel which appears to be a mashup of some of the best parts of the Element into a single system for less than half the price. Without having actually used it but having Tangent's other products to guide me in my assumptions, I think the Wave will be my eventual solution for my home office because of the added functionality it brings without taking up my entire desk.

What I Liked (Ripple)

What Could Be Improved (Ripple)

What I Liked (Element)

What Could Be Improved (Element)

The partnering of Phase One with Tangent will be a real boon to professional editors. The tactile element that their panels bring to color grading is something that has to be experienced to be fully understood. They have options from high-end down to more of an entry level price point and the Tangent Mapper app allows for unparalleled customization to fit your exact needs. Check out all of Tangent's products on their site.

Looking at Tangents website they have IOS and and android apps. Might be a way to start using the Tangent system.

I guess it's just me, but if you need that much hardware to get the job done, maybe being a Fuller Brush salesman might not be bad idea...

I don't think I ever said you NEED that much hardware (though top-shelf video editors absolutely benefit from the full setup), just that having the trackballs in particular speeds up your color grading and improves your overall experience over clicking a mouse over and over.

totally agree, time is money too...

This seems like an interesting product, however i can't see myself using it. I believe most professionals use capture one as a base to make their RAW adjustments and then export it to Photoshop to finalize the image (with a Wacom tablet). Dont get me wrong it looks fancy, but i would be interested in seeing real life example photo editing for commercial use to see if this would improve my workflow or quality in any way.

The Element panel is probably overkill for most people who don't spend 99% of their time editing color in C1, or who don't also do extensive video work as well. But the smaller Wave panel is really fantastic for quickly and intuitively nailing your color grading before going into Photoshop to finalize an image.

I watched a live demo of the Element panel at the Standout Forum and it was very impressive. But I do think all of the wires are a bit of a downer in a world where everything is becoming wireless. At the very least they could use the magnetic pins to create a connection between the units and have one cable with a built in signal amplifier to power the whole unit. This is already being used on the much cheaper Palette Gear modules which can be used in lightroom. The palette gear modules aren't quite as fancy but they're way smaller, modular and configurable both in what each module does and the layout. https://palettegear.com/

If you're in LA you may be able to demo the Element at Digital Transitions. They were the guys hosting the Standout Forum to show off all of the Phase One and Capture One tech

Do you know if they've added support for assigning straightening to one of the control knobs?