How a National Park Changed the Way I Shoot: Lessons From Yellowstone (Part 3)

I've never been one for collecting souvenirs, not even remotely. I have always much preferred to take some extra time to hunt down a few locations in which to shoot some landscape photographs. For me, the pictures that I get to take home are the best souvenirs that I could hope for. In many ways, the more work that it takes to capture such images, the more the pictures end up meaning to me. I get to feel like I earned the right to have such a fun and print-worthy memory. I would venture a guess that there are quite a few of you who take the exact same approach when you travel.

As you can see, this is Part 3 of a 3-part series of articles about Yellowstone. If you haven't already, make sure to check out Part 1 and Part 2.

In a place as big, as beautiful, and as varied as Yellowstone, it can be tough to know where to start. When we first drove through the park entrance and made our way through the countryside, I wanted to pull over just about every other minute because there was something beautiful that I wanted to capture. If I had taken that approach, our trip to Yellowstone probably would have lasted five years. I had done a lot of homework prior to the trip, doing as much virtual scouting as I could to try and pinpoint a collection of places within the national park that I wanted to check out. Thanks to Google, I was able to scout a lot more ground in preparation for our trip than would have been possible several years ago.

Of course, I wanted to hit some of the popular tourist spots because they're popular for a reason. Sure, I was sharing Old Faithful with several hundred people, but that hardly detracted from my enjoyment of seeing the well known geyser in person. In fact, we ended up sitting next to wonderful couple that had traveled all the Yellowstone from Michigan. We had a great time sharing our mutual excitement for being in the park and giving each other recommendations of places to see. I am still friends with them and interact with them regularly on Facebook. Sometimes those random conversations with complete strangers can result in some fun interaction that will always be remembered. That brings me to the next lesson that I learned from Yellowstone.

Don't Be Afraid to Involve People

Whether you're traveling by yourself, with someone else, or even with a large group of people, it's not very likely that you'll ever actually be 100 percent by yourself at any given time. This is more true for the locations like Yellowstone that are popular for tourists year-round than it is for places off the beaten path. But still, we live in a planet populated by humans, chances are you'll have to share some space with another human. When I first started really pursuing photography as a passion, I was often annoyed at other people. I'd be irritated whenever they'd be too close, I hated it when they'd walk in front of my shot, I couldn't stand it when they tried talking to me when I really just wanted some quiet. Sadly it took me all to long to figure out that it was my paradigm that needed to change. I was simply setting myself up to be unhappy, no matter where I was or what I was doing. Instead of finding reasons to be annoyed with complete strangers, especially in a place as beautiful as Yellowstone, I found that my time is much more enjoyable when I can simply find ways to appreciate those that are around me. We are, after all, there to enjoy the exact same things as each other. 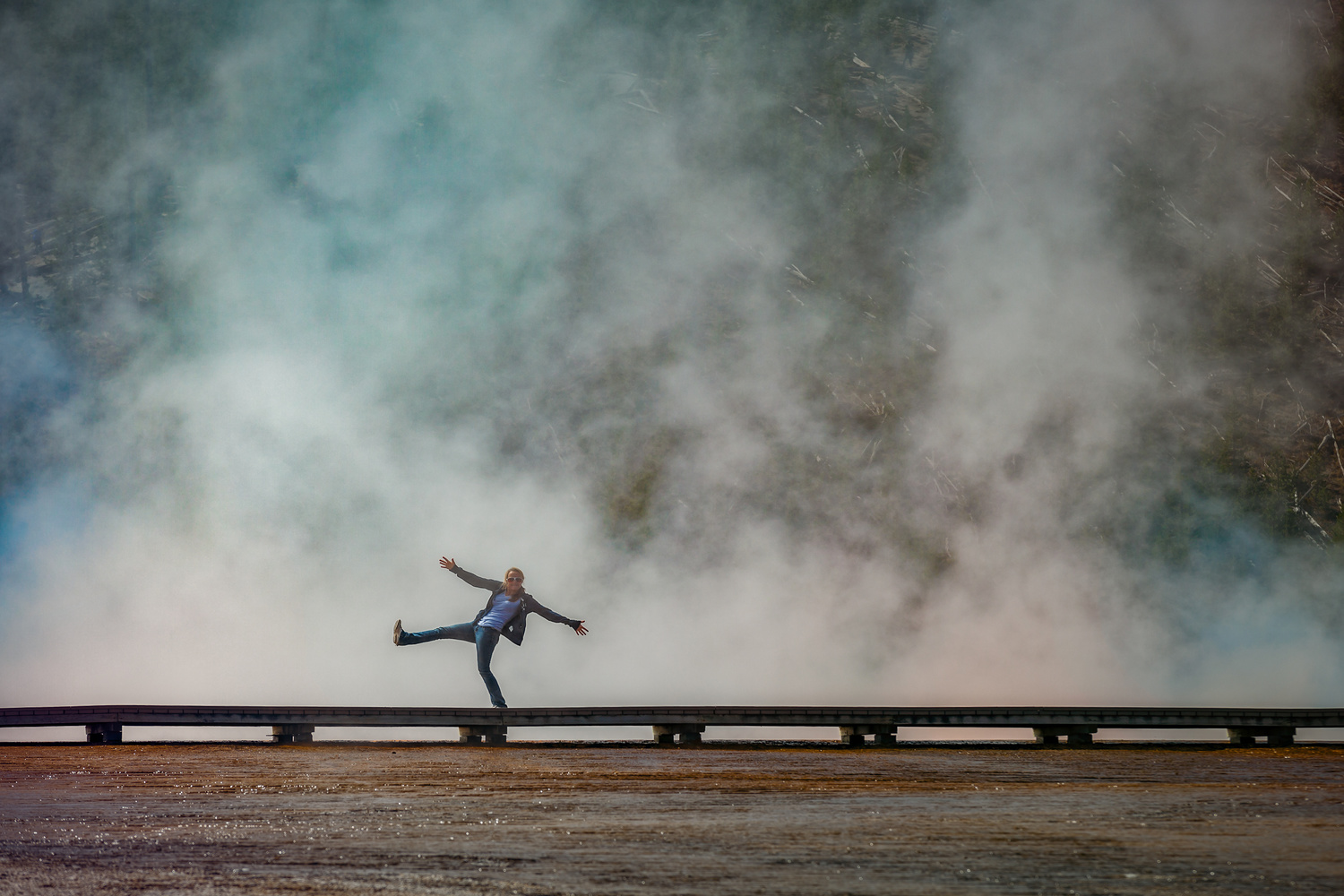 One thing that I'm absolutely terrible at while on a trip like this one is simply forgetting to take pictures with the people that are accompanying me on the venture. I really never do travel alone; I always have a friend or family member on these trips and sometimes I have gotten so hung up on taking that next epic landscape shot that I forget that it is also important to capture some of the moments that are shared with the live human beings that are there on the trip with me. In the moment, it almost always feels a little silly, but several years down the road those photographs of us end up becoming so much more meaningful.

These types of shots are rarely perfectly executed, the compositions can almost always be better, and for the most part I usually wish I had better lighting for these pictures. But they're memories, not just snapshots, and memories are something worth capturing and preserving. This shot below of my parents has served to remind me of a couple different smaller memories. My parents have always been some of my biggest supporters and this shot captured that perfectly. My dad is carrying my tripod and he actually carried the bulk of my gear during our trip to Yellowstone because I was still recovering from a shoulder surgery earlier that year, a small detail that my memory might not have preserved through the years had I not captured it. 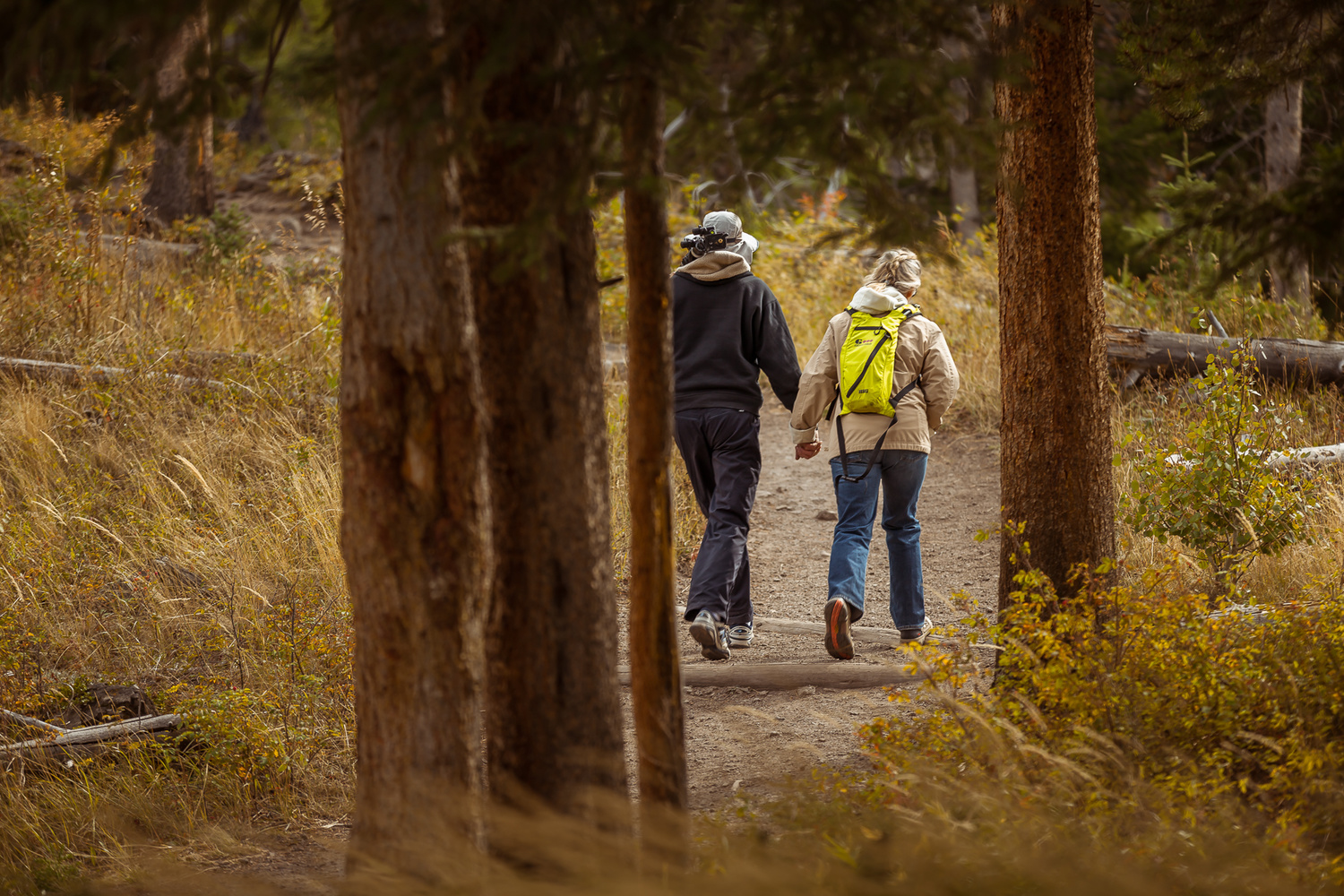 I was pretty serious when I said to look for ways to appreciate those around you, even complete strangers. One of my personal favorite images ever captured on this trip resulted from a totally random opportunity. In this next shot below, I was set up on the river bank to try and capture the fascinating view of boiling water flowing out of a hot spring as it entered the Yellowstone River. Because of the cooler temperatures in the air, the steam rising from the hot water was pretty thick, it was difficult to see very far in the distance. For a brief moment, however, the wind picked up to the point where it cleared the steam and gave me a longer field of view. At that exact moment though, a small group of people stepped into frame just at the top of my composition. At first I was again annoyed, but I just kept shooting and telling myself that I could always use Photoshop to cut them out later.

Most of the group left after only standing there for a few seconds, but one person stayed behind to continue looking at whatever they were seeing up there. They stayed there for quite a while. It was almost like a switch clicked in my brain in that instant, that solo person standing there at the top of the hill became the single element that tied my image together. I honestly don't think that this shot would have been near as interesting if that person had not stayed in my frame, perfectly still while the steam billowed around them. At that moment I berated myself for even getting annoyed in the first place because of how much fun this shot turned out to be for me. 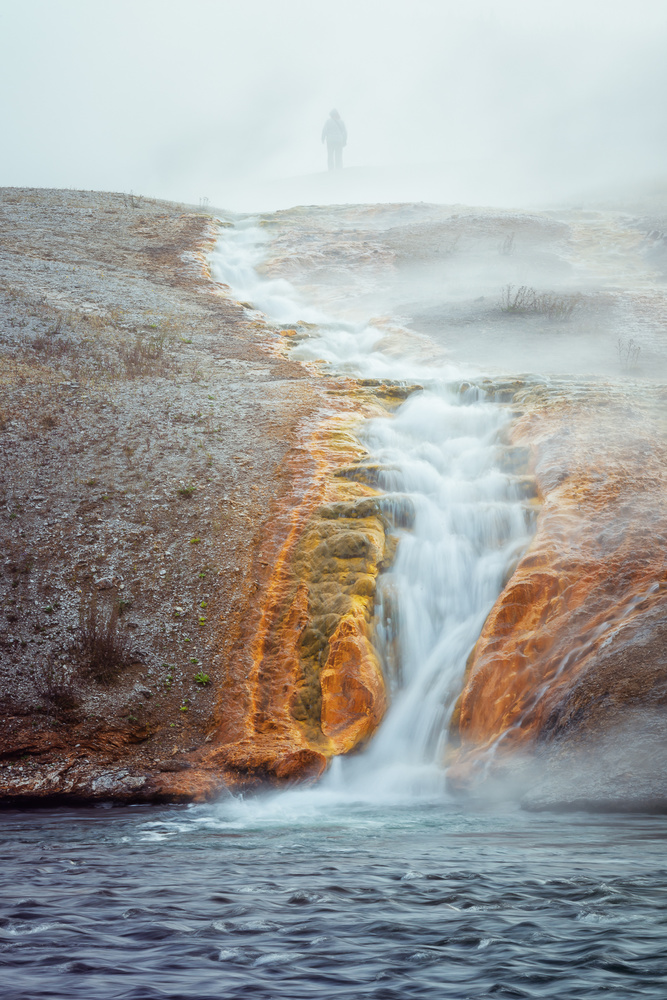 Have Fun With Textures

Sure, it's advice that any beginner photography class will go over, but it can really come in handy. Some of the shots I ended up taking during my trip weren't ones that captured any iconic views, but rather things that I saw in person that we simply don't have where I live in Southern Utah. This shot below of Lower Falls is composed in a way that really doesn't show of the epic magnitude of the canyon itself, but rather how the water looked. I had a neutral density filter, so I could have opted for much longer shutter speeds if I wanted. I really did want the shutter to be just long enough to capture the movement, but still fast enough to capture as much texture and detail in the waterfall. We just don't have rivers or waterfalls like that in Utah, so for me, this thing was just super cool. 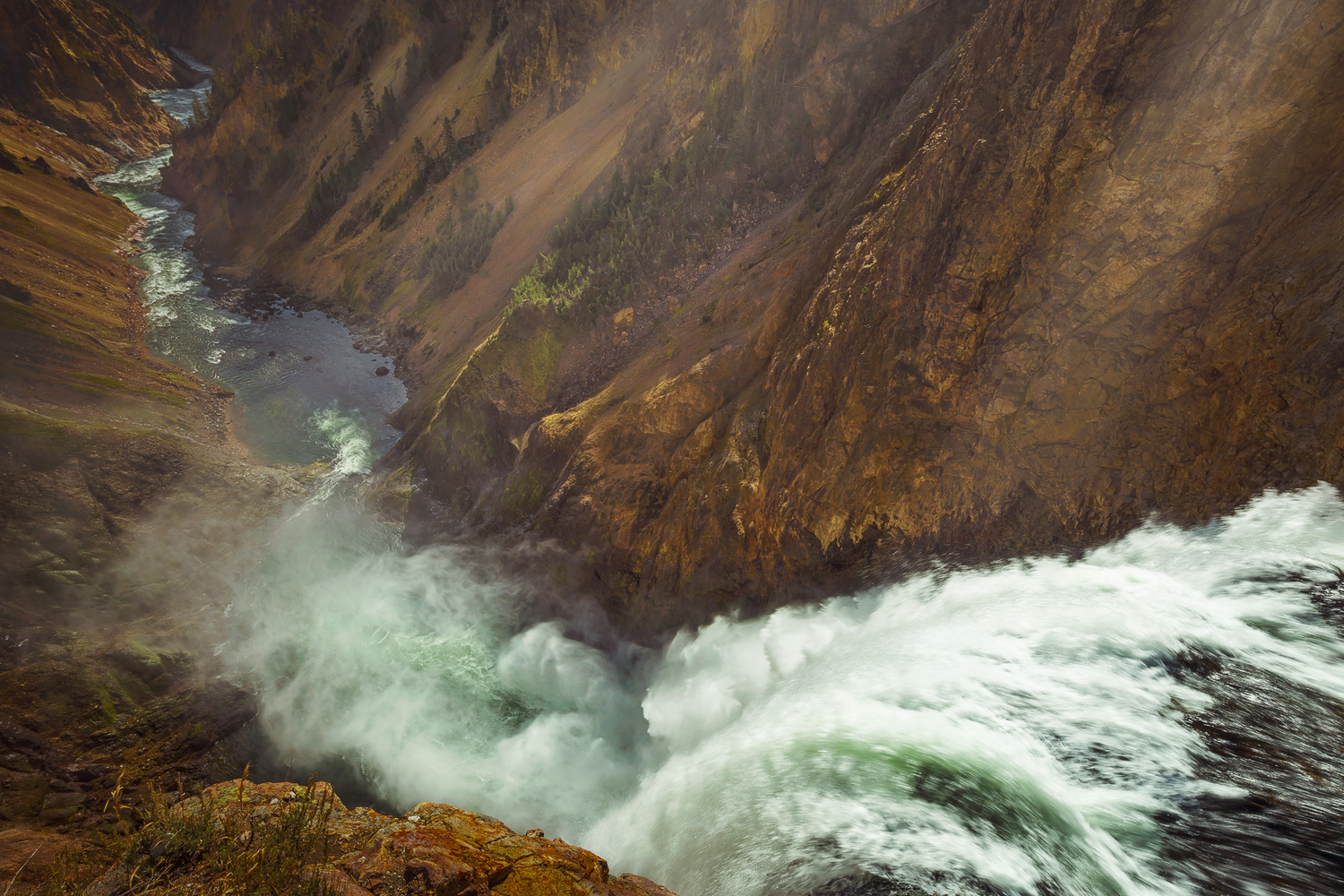 Perhaps this next shot falls more along the topic of patterns, but I think it retains enough textures that it still fits this category. We just don't have forests of pine trees like this where I live. Sure, we have pine trees, but not quite like this massive forest of lodge pole pines, and certainly not in this abundance. I'd never seen so many trees scattered on the ground like this, and still so many standing upright. One of the most unique views I've ever experienced in person. The straightness of the trees, the smoothness of their bark, and the sheer numbers of them both on the ground and standing upright was a scene that was truly new to my eyes. 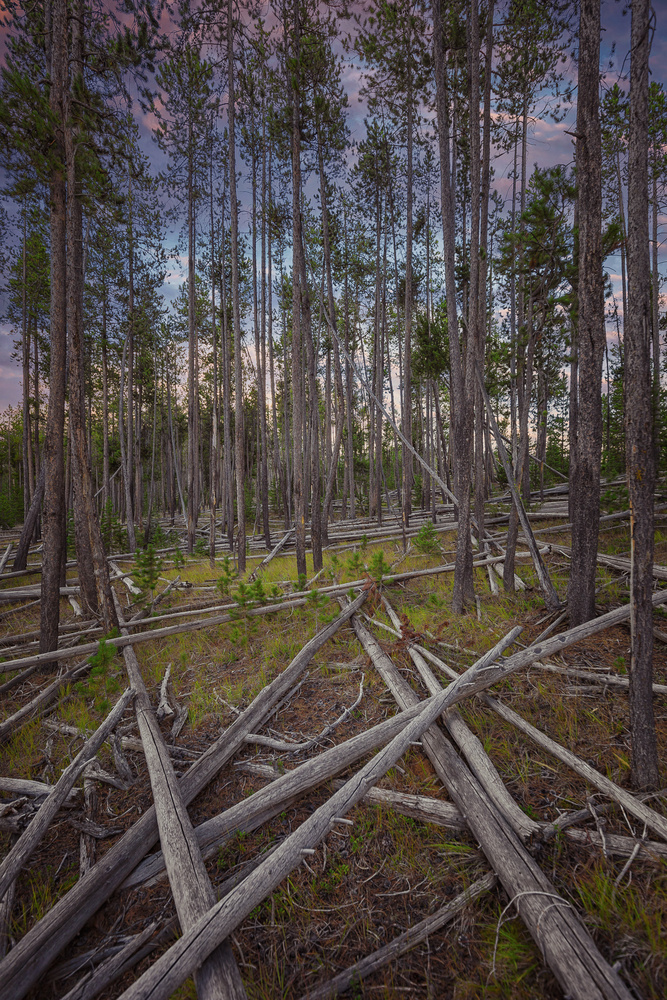 Sometimes capturing textures really just comes down to how you set up your shot. A simple switch up of camera settings can yield some very different results, which in turn tells a slightly different story. I had tried several different compositions and camera settings to capture Gibbons Falls, but this shot below is easily my favorite of the bunch. For me, it became this perfect clash of textures. At the top we have a very dense population of pine trees, on the sides we have these steep cropping of rocks, and the choice to shoot with a slow enough shutter speed to turn that water silky smooth ended up being what made the shot for me. A shorter shutter speed, which would have resulted in a lot more detail and texture in the water, would simply be adding even more texture to an already detail rich photograph. I love how the smooth water really stands out because of all the dramatic textures in the image which surrounds it. 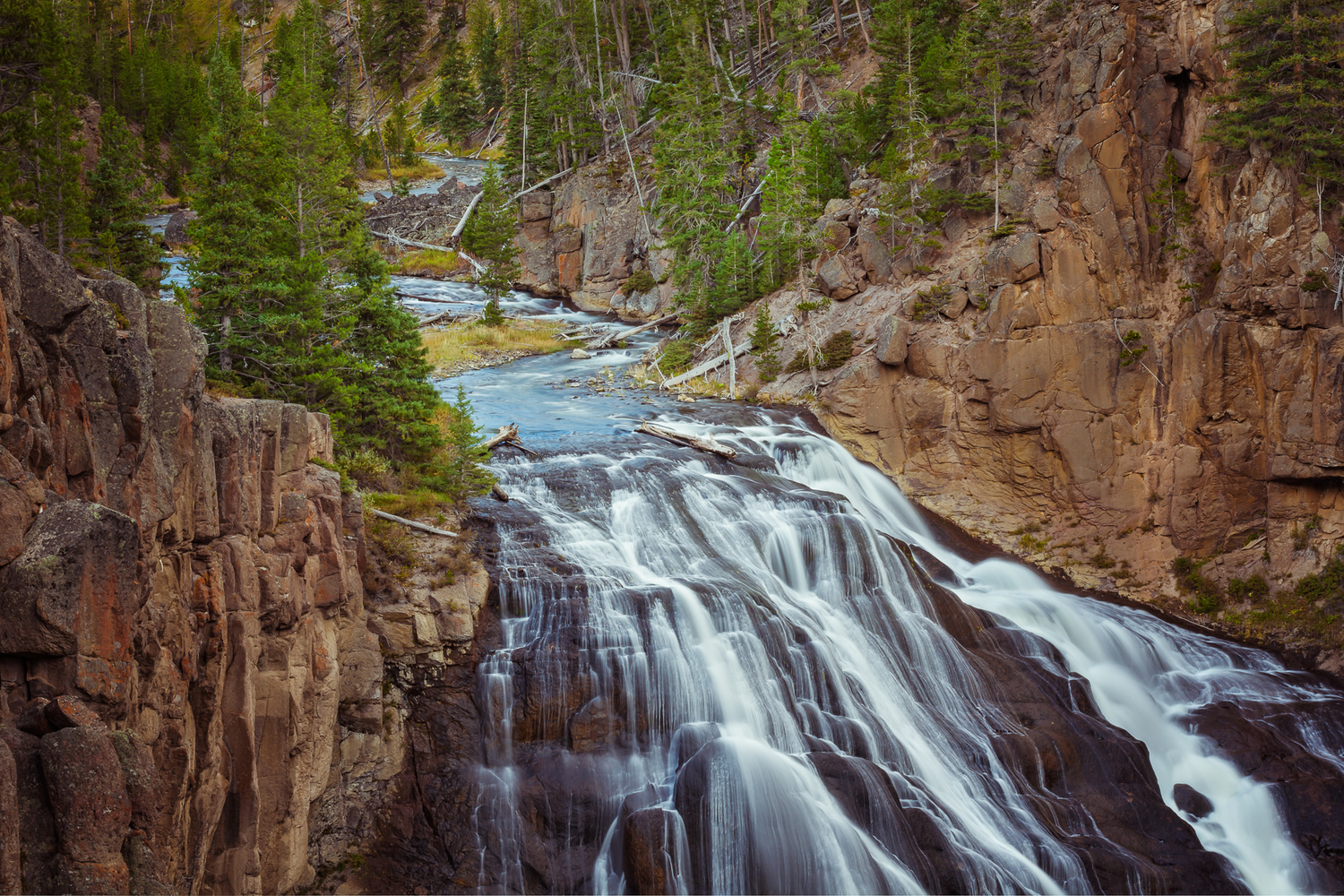 Texture in an image is one of those things that, for me, is easy to overlook. Taking the extra time to put it to work for you is something that will always pay off. The payoff may not be exorbitant, but it will definitely add to whatever image is being created. Sometimes it may just take some experimentation to figure out what setup you like the best. I lost track of how many times I'd set up my camera with settings that I was dead sure would be optimal, only to see the result and have to switch it up because what I saw in my head didn't translate as well as I had thought.

I am beyond grateful that I had the chance to spend an entire week exploring this beautiful national park. I learned countless lessons in both the realm of photography and in just how to be a better person. My appreciation for the smaller things in life has definitely grown. Thank you, all you fantastic readers, for sharing these adventures with me.

Landscapes
How a National Park Changed the Way I Shoot: Lessons From Yellowstone (Part 2)

Animal
How a National Park Changed the Way I Shoot: Lessons From Yellowstone (Part 1)

I enjoyed the series. This is a totally different article from the one posted a few weeks ago about tourists and amateur photographers getting in the scene of favorite scenic parks that a professional photographer thought was his park to photograph. Kennedy Space Center Visitors Complex is not a national park, but it is filled with history and also tourists; one cannot avoid tourists at KSCVC.