Photojournalism Is for White Men, as Revealed by a Stunning New York Times Photograph

There’s no question that the New York Times photo of James Comey during his Senate Intelligence Committee hearing, where he detailed his uncomfortable and suspect dealings with President Donald Trump, is going to be one of the iconic ones of our time. There’s also no question about who overwhelmingly seems to dominate the photojournalism field based on this photo: white men.

Doug Mills, the photographer who carefully planned and shot the photo, used a monopod from above the gaggle of photographers. If you read this detailed write-up about it, you’ll see another photo that has an even clearer view. Counting the photographers, about 32 seemed to be white males, and only two women in the group. There may have been a few minorities, but it’s hard to tell.

Regardless of what the exact count was, it’s stunning that news organizations don’t consider this when sending out photographers. Yes, news outlets have hit tough times, and those tough times disproportionately affect minorities in newsrooms, but it’s still something an editor should think about. This is even more important when it involves a president that specifically targets minorities when crafting policy.

The Comey photo reveals that there’s still a huge gender/race gap in photojournalism. If you look at the list of New York Times reporters in the White House Press Corps (or at least the ones listed here), there’s a lack of diversity across the board. It’s a similar situation for the board of the White House Correspondents’ Association. Fox News, according to that same list, seems to be doing better on this front. 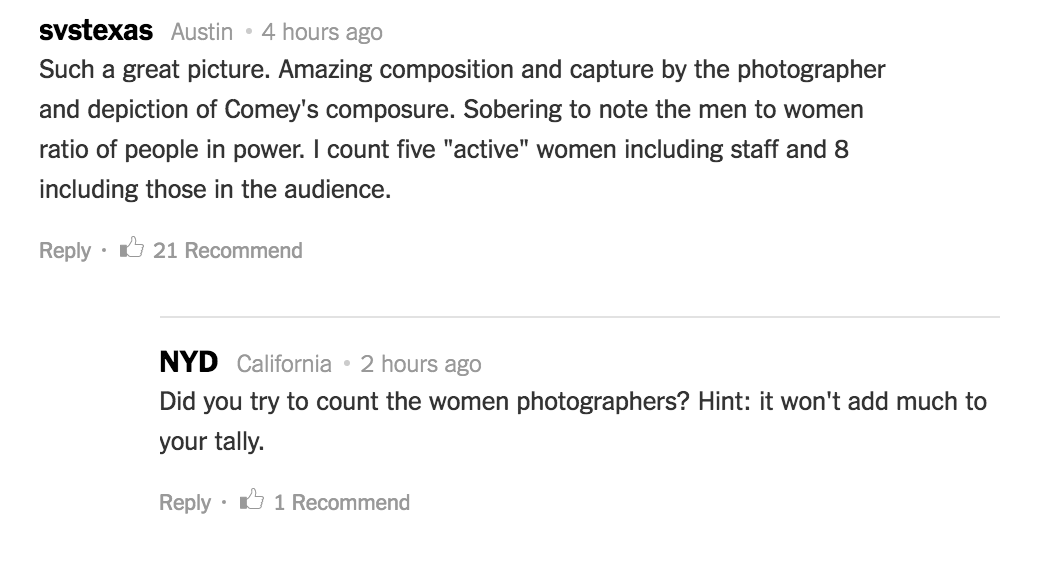 Some of the comments on the New York Times story about the photo.

In January, shortly before the inauguration and on the cusp of expanded racism that followed the new administration, Fstoppers Writer Alex Cooke looked at the diversity problem in the photography industry as a whole and called out an important reason to foster diversity in photography and specifically photojournalism:

This particular photo from the Comey hearing reveals that no one’s listening.

hell no! its not white men who made the earth what it is - just the last shitty 200 years... as a matter of fact when our (european) ancestors still lived in caves and communicated by grunting a culture rose - the chinese. uninterrupted till today. when our (european) ancestors had the inquisition and burned thousands for witchcraft, arabs already did complicated brain surgeries. white men went on crusades, chopped your head off if you had the wrong faith (kinda sounds familiar, huh), white men colonized and enslaved the world. white men then invented the steam engine, causing massive global pollution. nothing to be too proud of.

Not quite that simple but your point is taken.

Whites have created a system that benefits them. The history books you read are wrong. There has been plenty of contributions to our society by people of other cultures and ethnicities. The problem is that whites have taken credit for a lot of those contributions. They even made Jesus white. How pathetic is that?

F Stoppers are you trying to piss off your base or just being stupid today? Here's a strong suggestion for you guys at Fstoppers...Don't post crap like this. It serves only to hurt your business.

Stupid article by an annoying person who is biased against President Trump and has a problem with white people. Look at this ignorant, sour statement "a president that specifically targets minorities when crafting policies." What a load of crap. Sounds like nonsense garbage from CNN. I say DRAIN THE SWAMP and MAGA!

Screw white people! Aren't there enough of them already?

Wow! This just got really deep!

Hmm, all new posters on the racism in photojournalism article.

Maybe the minorities were the ones willing to go get another job when the industry was cutting jobs, pay, and shrinking. In which case the overwhelming presence of white dudes denotes a greater lack of initiative. Of course, if they are freelancers it could demonstrate more initiative in the white dudes or a greater tolerance for risk and a reluctance of minorities to assume risk. I don't know, and neither do you - which makes speculation without investigation nothing more than cheap race baiting.

1. The photo of Comey is mundane. The same image has been shot innumerable times by other photographers in like circumstances ie it is not "iconic."

2. The author posts his URL, so out of respect I took a look. If there is a question as to how photographers are chosen to be, "sent out" (in this case given columns to write) we can legitimately wonder about this author being hired for this column. It was certainly not on the strength of his portfolio, which (shocking to me) would not earn above a weak C grade in a decent fine arts program at an average college. http://wasimonline.com/photography/personal-art/ judge for yourself. (A drill down of the short CV posted under the author's photo would be interesting, there has be less there than is implied by the job list.)

3. One can write up intellectually stimulating observations of hiring bias in journalism, but this piece is not that. The author's politics here is run-of-mill PC stuff more typical of a naive college student than a pro journalist, and written as though for naive college students who nod in unison at that level (head count with presumptions) dreck without thinking. Poorly proposed racial politics only lowers the quality of this online photography magazine.

Maybe new readership demographic studies by this publication shows it to be mostly PC kids? You simply can't post poor image judgement AND cheesy fad politics and retain the respect of adult readers.

Oh please, one who left Photojournalism and experienced the falling of the traditional media, now writing to pushing more none-white people to go into this profession? How much does Wasim Ahmad hates non-whites?

The poorly written prose is not sufficient to support the unfounded enmity.

Maybe if photographers took the same critical approach towards inequality [in this field] as they do for the photos they create, there'd be more of an open discussion.

Maybe not. I would hope in fact that an artist or craftsperson keeps a higher level of criticality toward his product than what is common in knee-jerk PC value judgments.

News flash...life isn't fair. There is no inequality in this field. Only those that work and put in the time to be good and those that try to degrade them because they refuse to do the work and be good.

Thank you for proving my point. Is it that difficult to believe that someone would not be given a fair shot or the opportunities to prove themselves because of the color of their skin or gender?
Because anytime that point gets brought up, people (and in this case, photographers) are quick to dismiss and write off as people not putting in enough work. In case it isn't known, some people work twice as hard to be recognized...versus the mediocre colleague next to them with a different skin color or gender. I guess only in a perfect world can you be judged by your actions.

Baseless accusation without a stitch of proof... The entire article was based on a lie and was set up to be a hit piece of Trump and white America by a writer that has been found to promote hate fill rants previously.

I'm trying to understand which part you consider a lie here. I said that most of the photographers here were white. And male. There's a photo that shows just that. I also looked up the press corps and pointed out that, surprisingly, FOX News has more diversity then the New York Times in that area.

I also would like to challenge your assertion that I've promoted "hate-filled rants" in the past. What in the world are you talking about?

Wasim, I don't think you really know anything about Photojournalism as a profession. When digital media started destroying print media, the majority of the papers could no longer afford their photography based staff, and most positions / employees were cut between 2005-2010. Since then, all PJ roles were full, and people are applying with 10-40 years working for other outlets.

From a demographic perspective, to be a photojournalist at one of the papers to begin with you would have needed to be at least 30 years old with at least 10 years experience to be seriously considered for a PJ role. That means PJs, would have need to have started photography in the 90s at least. The cost of a professional camera, photography education, film, chemicals, travel to and from events was quite staggering during that time.

The only reason you are not a PJ is because you have a terrible portfolio as someone already pointed out, you have no relevant photojournalist experience, you probably have no formal photography education, and you're easily outgunned by former PJs who have been shooting for papers for 10-20 years and are out of jobs.

Right there in the bio ... I've worked at three newspapers and have a master's in photography from Syracuse University.

Wasim, Since you teach photography, please let me know what you tell your white male students when they apply for jobs in photojournalism. Do you tell them they should be judged more on their skin color than their photographs?

I thought Alex did the humorous articles!?

Just out of curiosity, are you going to use everyone's comments to try to prove your point?

"...Stunning..." Really ? What's stunning is Fstoppers would allow a racist journalist to post this. Look up the definition online of racism, it doesn't apply. Diversity... equally inapplicable here. Are you shocked by the lack of diversity of an American Football or basketball team ? Are you shocked by the lack of diversity in American rap music ? Are you shocked that most all of Thai restaraunts are owned by Thai people ? I want to visit FStoppers for photography, not shock journalism, most of which appears to be biased opinion from disgruntaled or baggaged individuals attempting to elevate thier own popularity or dirty those more successful than themselfs... i.e. 'Fake News'.