Taking a Portrait With the Tamron 100-400mm Lens

I recently got my hands on the new Tamron 100-400mm zoom lens and wanted to try a unique portrait idea. Unfortunately, this photo idea involved wind, tides, fast moving kiteboarders, and the ocean. What could go wrong, right?

One of my favorite sports to photograph here in Charleston, South Carolina is kiteboarding. Kiting is a relatively new extreme sport that allows people to harness the power of the wind and essentially surf across the ocean. When I typically photograph kiteboarders, I usually like to wade out into the ocean and use an ultra-wide-angle lens to get those up close and personal shots we are all used to seeing. It also helps having a waterproof housing like the Ewa-Marine U-BXP100 so you can safely protect your camera from the ocean. For this photoshoot, I will not be using any of this gear though.

My original idea for this photoshoot was to use the Tamron 100-400mm telephoto zoom lens so I could compress the background behind the rider. Then I thought, it would be really cool if the background could actually be the kite itself. Since the kites used for kiteboarding are usually 9-12 meters, maybe it was possible to compress the kite itself right up behind the rider so the majority of the frame was filled with the kite. 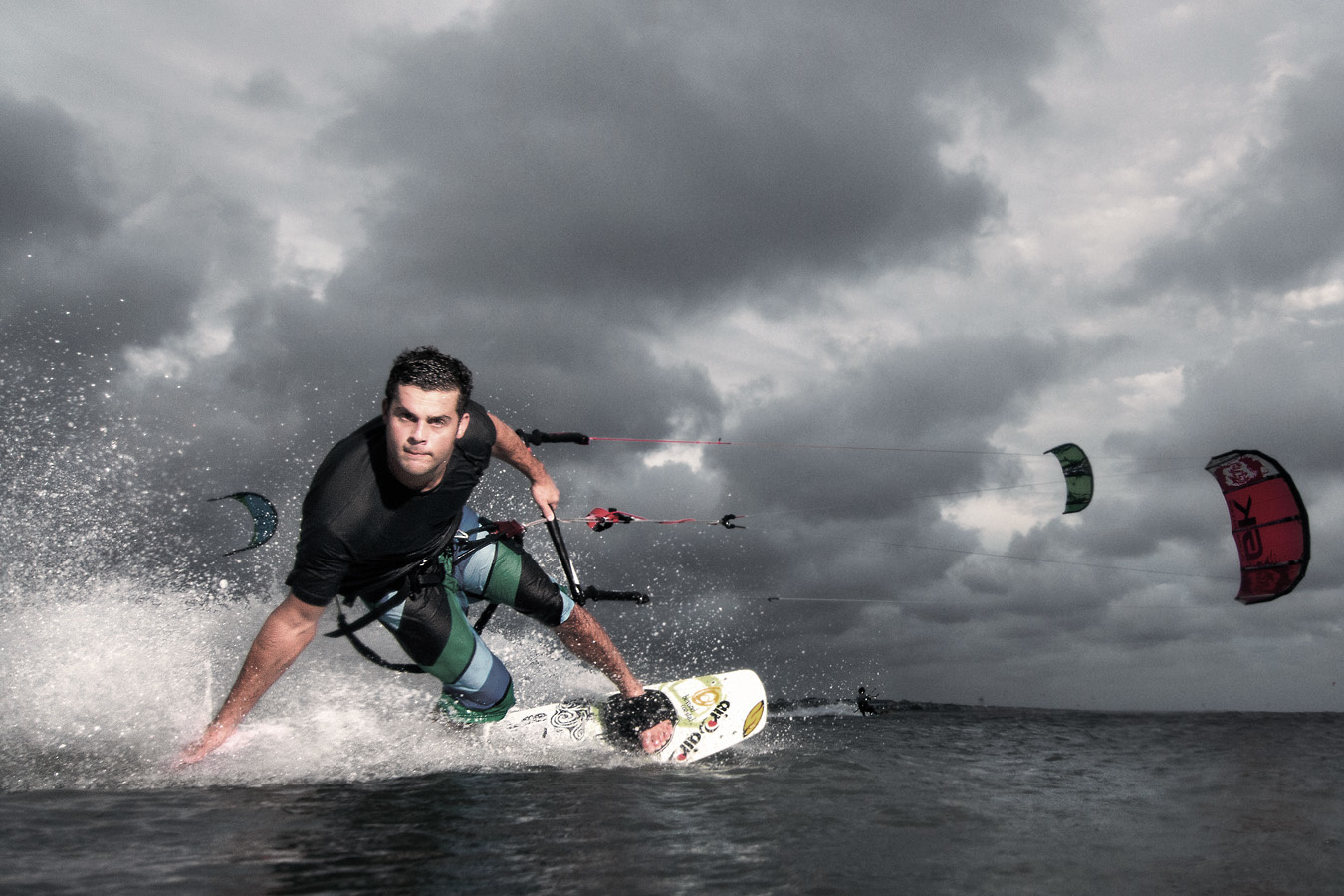 Wide-angle lenses cause the kite to appear tiny in the frame.

When you shoot close to your subject with a wide-angle lens, the kite appears very small in the frame. If I could stand much further away from the rider and use a massive telephoto lens, I could create a photograph where the rider and kite appear their actual sizes. When most photographers shoot kiteboarders with a telephoto lens, they typically crop out the kite altogether because it is positioned so far above the rider. In order for this whole idea to work, I would have to be 50-150 feet away from the action and the kite itself would have to be lowered down towards the horizon. Unfortunately, when the kite is in this position, the rider only has a few seconds before he completely loses wind power. To make things even tougher, the wind direction and the sun position had to be perfect in order to make a compelling photograph. 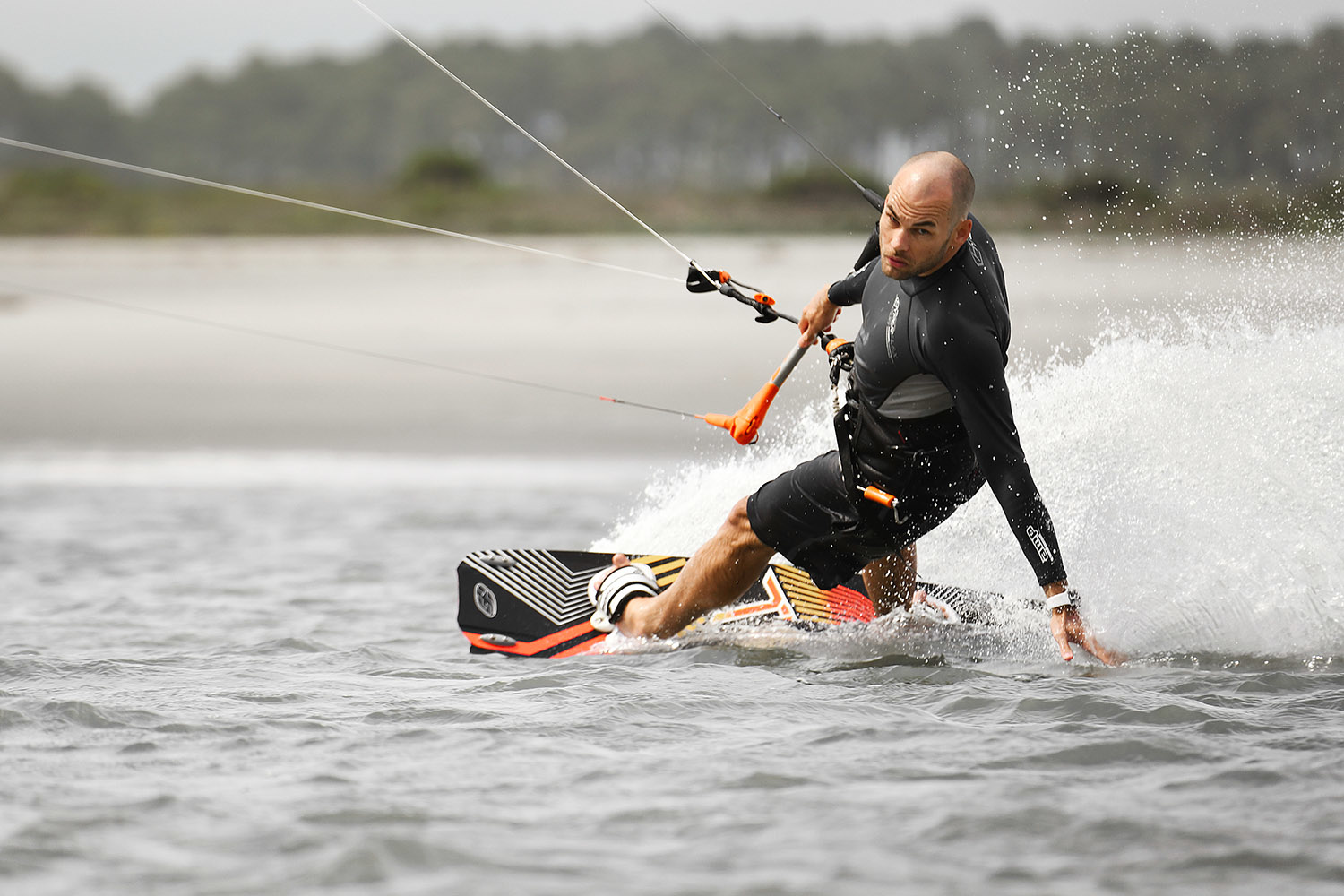 As you can see from the video above, this photoshoot did not go at all as planned. The wind direction on the beach required that I position myself out into the ocean during low tide so that the kite itself could be lowered behind the rider. If I stayed on the beach, the kite would always be between the camera and the rider which would have blocked the kiteboarder altogether. Without getting a boat or jet ski, the best way to stand out in the ocean was to carefully wade out to a small sandbar during low tide. Of course timing the low tide with the setting sun was yet another challenge to balance. 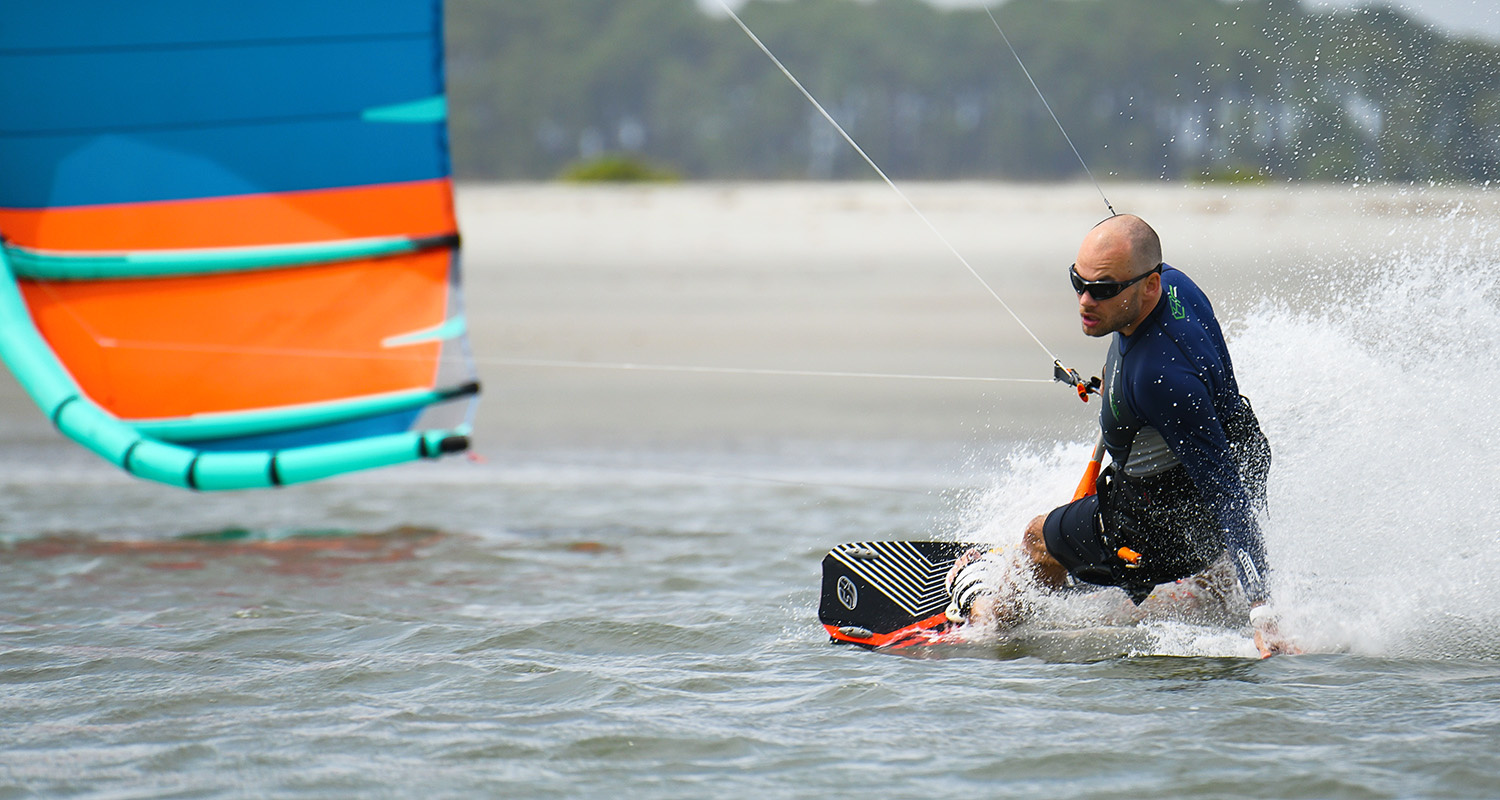 With poor lighting and tough tides, this was my best attempt.

After attempting to capture this action photo over the course of three days, I wound up scrapping the idea and decided to try something completely different. Maybe I could produce the photo in my head if I could remove all the elements outside of my control.

A Portrait Is Born

I absolutely hate giving up on a good challenge but in this case, I think the final image turned out better in the end. Instead of trying to shoot a natural lit image while Lee Morris kited through my frame, I decided to use strobe lights to shoot a portrait on the beach. By removing the ocean, tides, waves, and hoping for the perfect sun position, this approach would allow me to still capture a photo around 400mm so that the kite could be massive in the frame. Of course I could have used natural light for this portrait attempt, but where is the fun in that?

For version 2.0 of this image, I wound up using the same Nikon D850 camera and Tamron 100-400mm lens combo, but I also added a few Profoto B1 strobes to the mix. For the key light illuminating Lee, I modified a B1 light with the Profoto Beauty Dish just to give a slightly softer feel compared to a barebulb light. In order to embellish the look of the setting sun, I placed a second B1 behind Lee. This light helped separate him from the background and was outfitted with a 1/2 CTO Gel to keep the warm sunset feel. Now that Lee was lit in an interesting way, I needed to illuminate his kite that was underexposed. For the kite itself, I simply placed a third B1 strobe firing directly into the baffles of the kite and positioned it slightly towards camera left. Since the sun was setting slightly over my shoulder on camera left, these last two lights blended in well with the ambient light.

One, two, and three-light setup.

Once all the lighting was set correctly, which was super easy to dial in thanks to the controls on the Profoto Air Remote, the final step was to drag my shutter to introduce the perfect amount of ambient light from the setting sun. Since the Nikon D850 has a max sync speed of 1/250 s and I wasn't using high-speed sync with the Profoto lights, I was a little worried that my shutter might be too slow to hand hold at 300mm let alone 400mm.  Luckily, 1/125 of a second at ISO 64 was just fast enough to allow some ambient light to bleed into the scene without introducing too much camera shake. It also helps that the Tamron lens has pretty good stabilization built in to help minimize any camera shake at that focal length. If my shutter needed to go any slower, it would have been crucial to use a tripod or to switch the strobes over to high speed sync to gain a faster shutter speed while still using strobes. 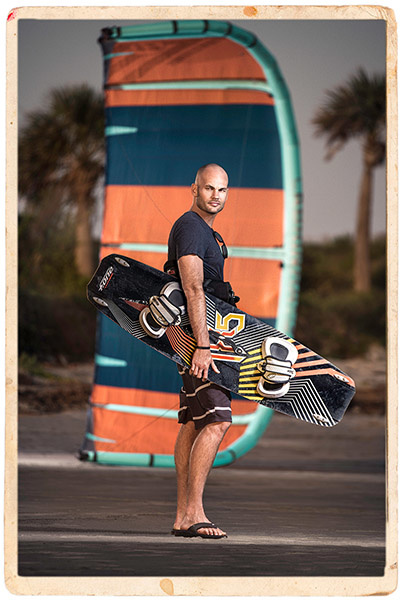 All in all, this was one of the trickier photoshoots I've ever attempted. I'm always up for a good challenge but when you start putting your camera gear in harms way and the final photographs aren't looking that interesting, sometimes it's better to give up and go back to the drawing board. Even today I still see this sick action photo of a kiteboarder shredding through the water with his kite directly behind him but capturing that image in the wild has turned out to be much trickier than I originally thought. I might try to create this image again down the road but as a composite where I can still have control over all the elements (maybe even in a huge studio space), but for the time being I'm happy I was still able to get the basic concept to work even if the final photo is more a portrait than an action shot.

I really appreciate Patrick's videos because he shows the viewer how he thinks things through and solves photographic problems. Plus, he inserts unnecessary time lapses just because.

While watching this I couldn't help wonder if Lee likes to go kitesurfing in front of the Dome House, and if he did much kitesurfing during his recent stay there. Combining the two elements in some fashion would be epic.

Did I put a time lapse in this video?

And yes, I think the only reason Lee stayed at the dome house WAS to go kiteboarding everyday...well and to whoop up on Mike Kelley 😂 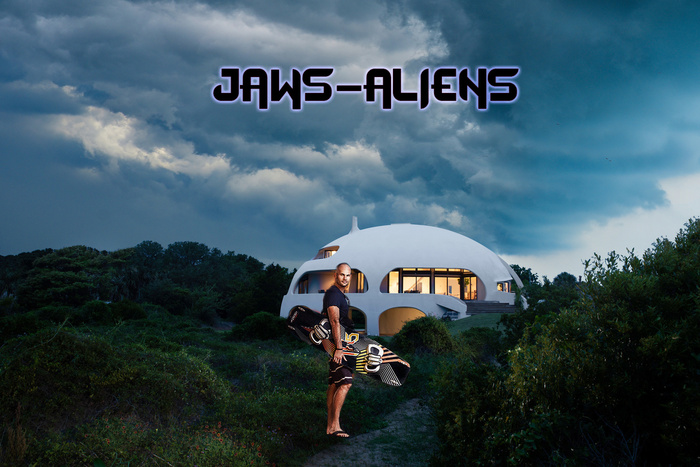 on-shore wind. not even kitesurfers like it! End result looks very cool. guess it was worth the water marathon!

I coughed it up as working on my tan

The whole camera gear and water thing is killing me.

Pretty cool video. I liked the way the lighting set up was explained in a pretty simple way. Plus it was cool to see the places I visit often. I’d like to see more videos of the Charleston area.

I found the Tamron impressive when I saw it at Photo Plus Expo. It's got good AF and stabilization, and pretty sharp. Good choice for your torture project, and you lived to tell.

Very informative, thanks. Reassuring to know even the good ones have 'failures" the odd time. Though you turned it around in to a different and better comcept. :-)

But would Nike buy this? Yes. Five stars. Congrats, you won a tutorial.

I've been shooting local kiteboarders since 2004. In 2013, after I don't know how many attempts, I finally caught a large kite in the same frame as the kiteboarder -- but it was a different kiteboarder's kite. Still, I was lucky enough to catch it. Very, very difficult.

You have some really nice images, there, all of them. Well done. 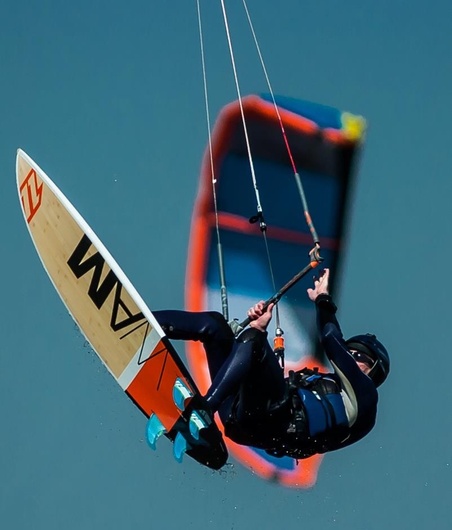 I just bought the new Tamron 18-400 for my Nikon7100 and i would love to shoot stuff like this but my lens won't even focus--not at 50,100,200, 300 and forget about 400. I was doing some street work last weekend and 218 f photos were delete...un- F%$k believable. I am calling Tamron on Monday in the meantime anyone have any suggestions...I do have the useless Tap-in..have no idea what to set things at...
Any Help would help...