Will the 3x Optical Lens on the New Asus ZenFone Zoom Replace the iPhone 6s?

Professional photographers understand the quality of imagery that can come from a camera phone will never contend with the pictures and video you can capture with your DSLR. Phones will likely always have an innate handicap with sensor size, which leaves it's images lacking. That said, it would be quite unwise for photographers to neglect the most recent developments in camera phone technology. The ease of use, accessibility, and ability to quickly share your imagery can make your phone one the most important pieces of gear in your business. So, when phones like the new Asus ZenFone Zoom come out with a 3X optical zoom, it's best to pay attention.

The new Asus ZenFone Zoom boasts something new in the phone market. Built into the camera is a 10 element Hoya lens that can bring 3x magnification to images. When you zoom with most phones, the phone isn't actually enlarging your subject, it's using digital zoom to simply crop in. The optical zoom on the ZenFone will actually enhance the quality of the image when you zoom in the same way your DSLR or any other point and shoot camera will.

Since the ZenFone brings something new to cameras, we wanted to put it to the test and see if it's strides should give it a dominant lead in the camera phone market. Pitting the ZenFone against a DSLR simply wouldn't be fair, so we chose to compare the imagery side by side to probably one of the most used cameras in the world, the iPhone 6s.

Our first test between the two phones was to compare the quality of stills straight out of camera. We took the phones to a local park and took similar compositions with a wide shot. Since this picture was the widest camera angle each phone could capture, the optical zoom didn't come into major play. 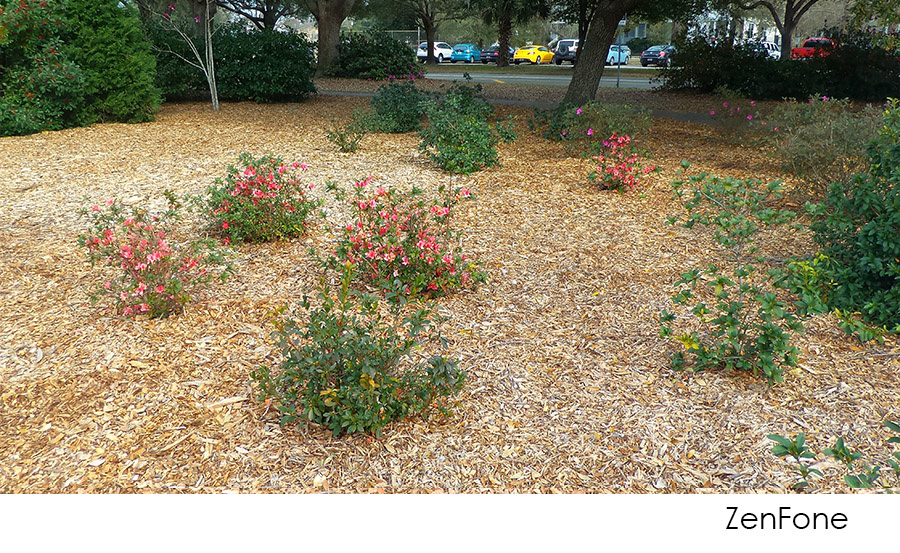 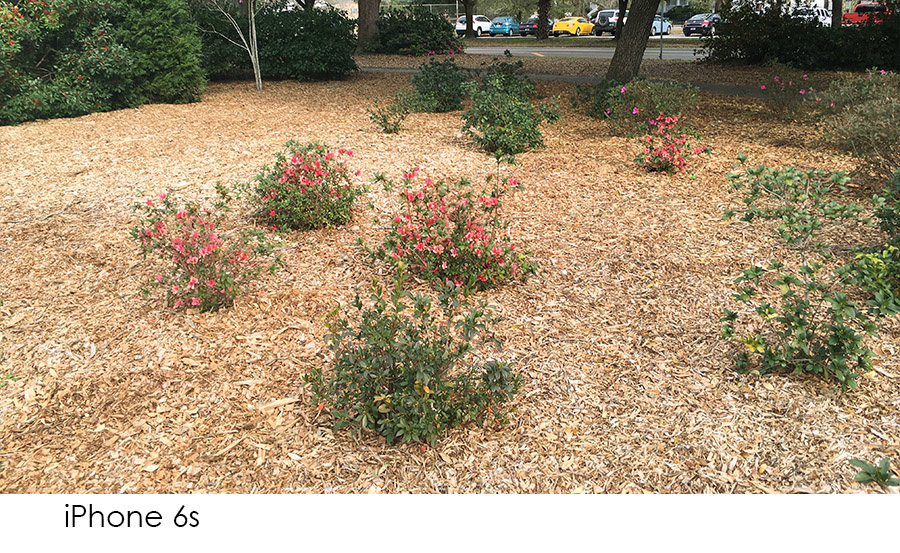 When we cropped in to each image for a closer look at the detail, there didn't seem a huge difference in quality. Besides a slightly different color profile the ZenFone seemed to have just a little more clarity and contrast. 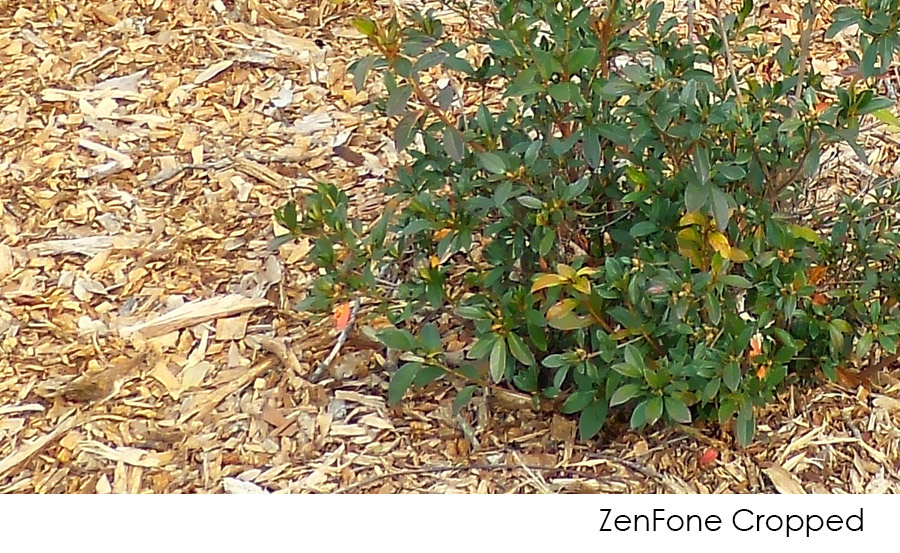 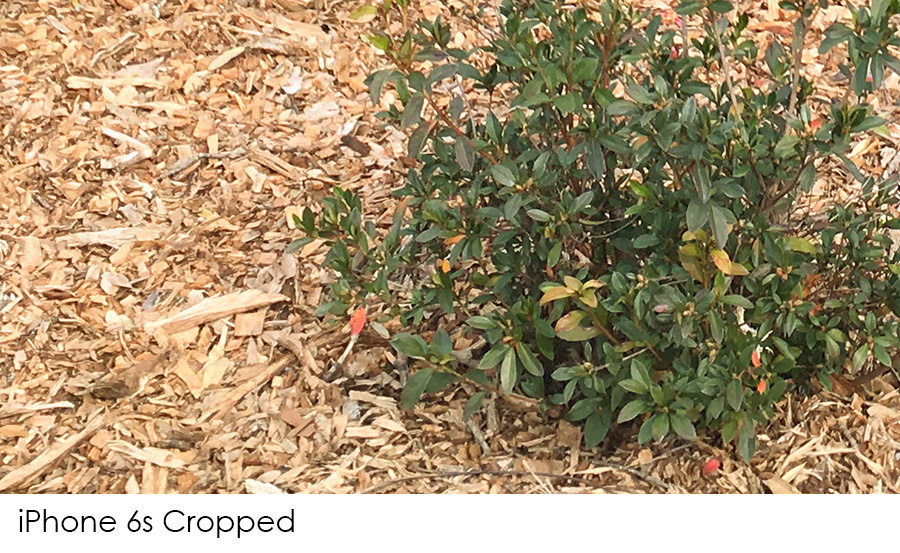 When we actually zoomed to take the next set of photos the 3x optical zoom of the ZenFone clearly began to show it's edge. The digital zoom of the iPhone 6s left something to be desired with blurry leaves and flowers whereas the ZenFone continued to display a fairly sharp subject. 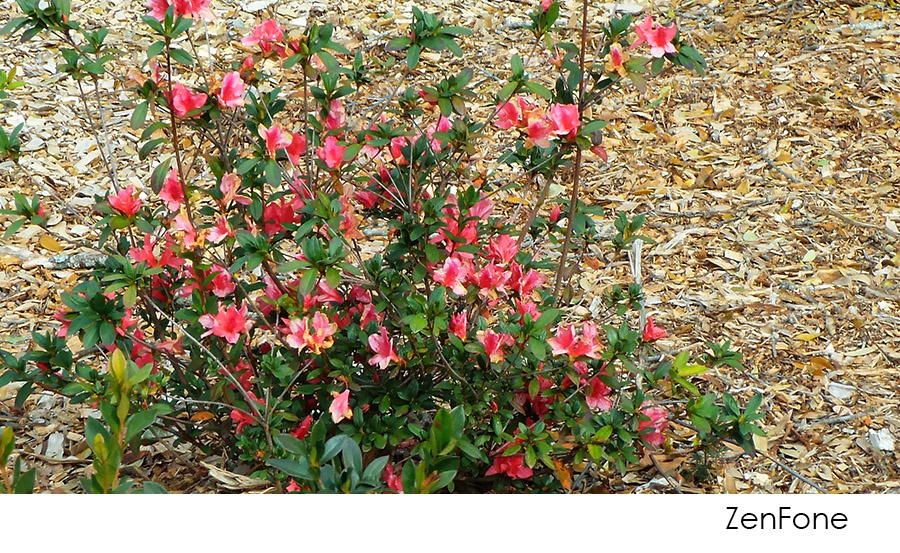 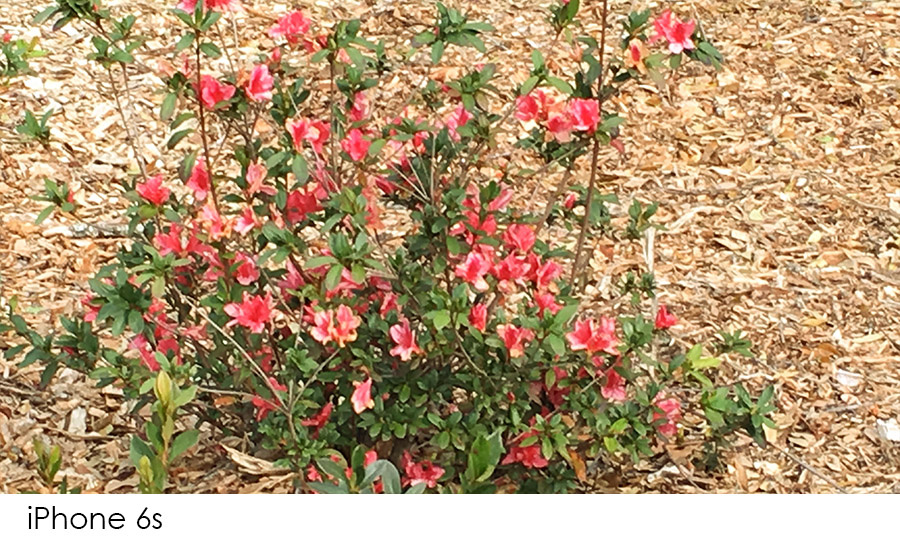 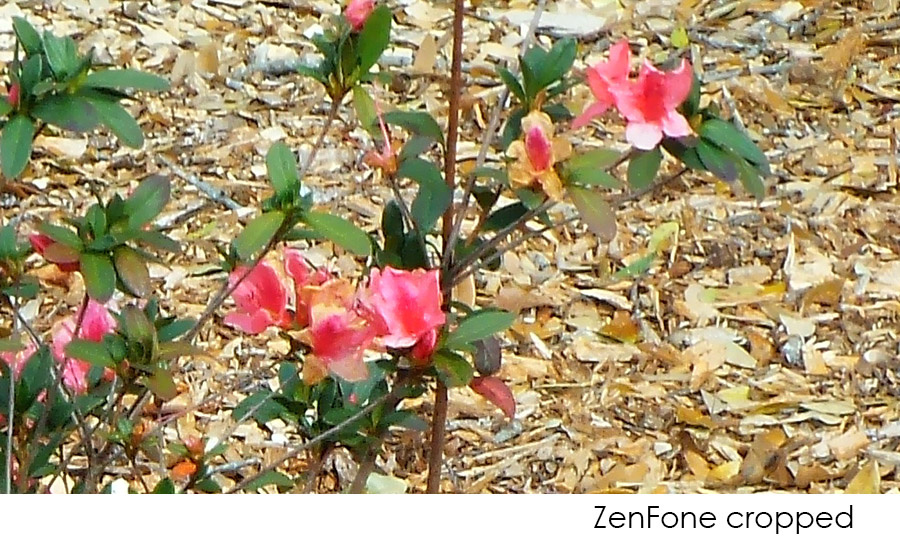 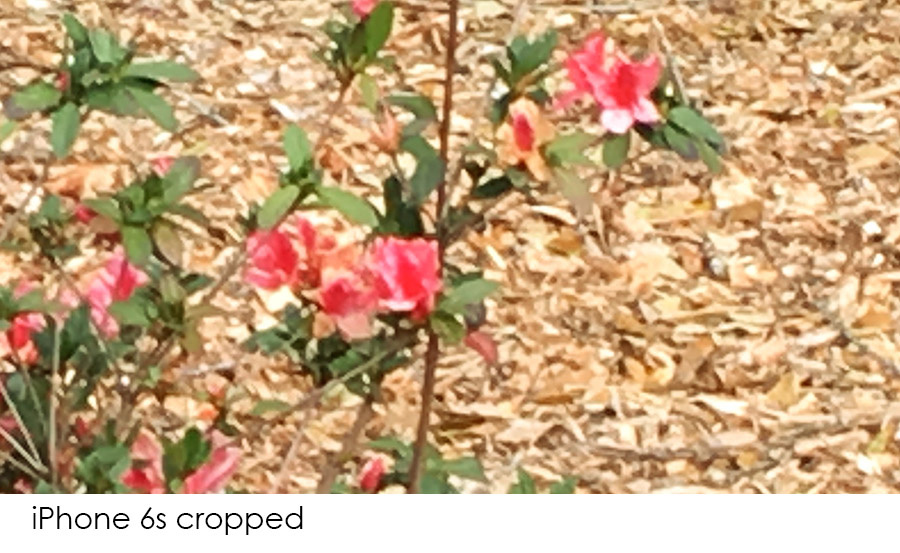 Another advantage that the lens elements of the ZenFone brings, is the ability to shoot closer to your subject. Our macro test was done back in our office with a bottle of hot sauce. Again, when the optical zoom of the ZenFone was put up side by side with the iPhone 6s, there was a clear winner. Not only was the Zenfone able to shoot much closer to our subject, the image was quite very detailed and crisp. 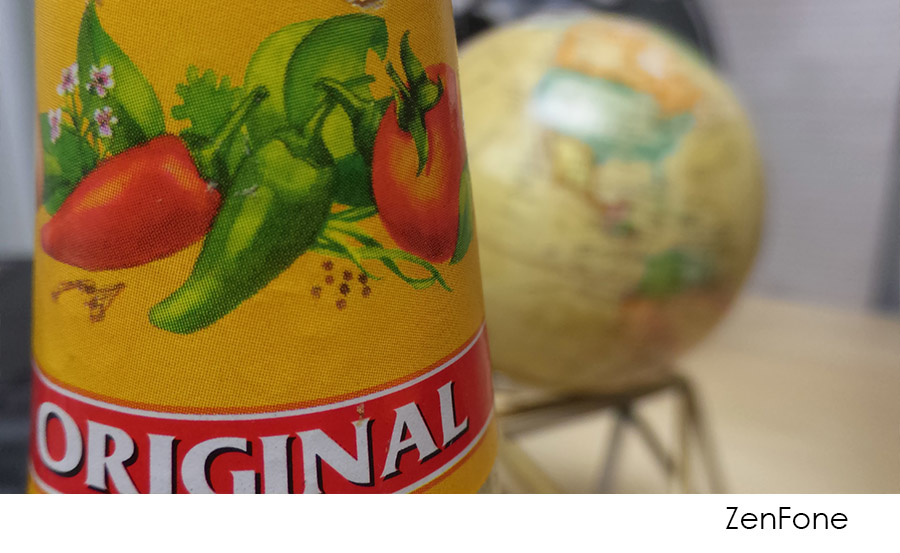 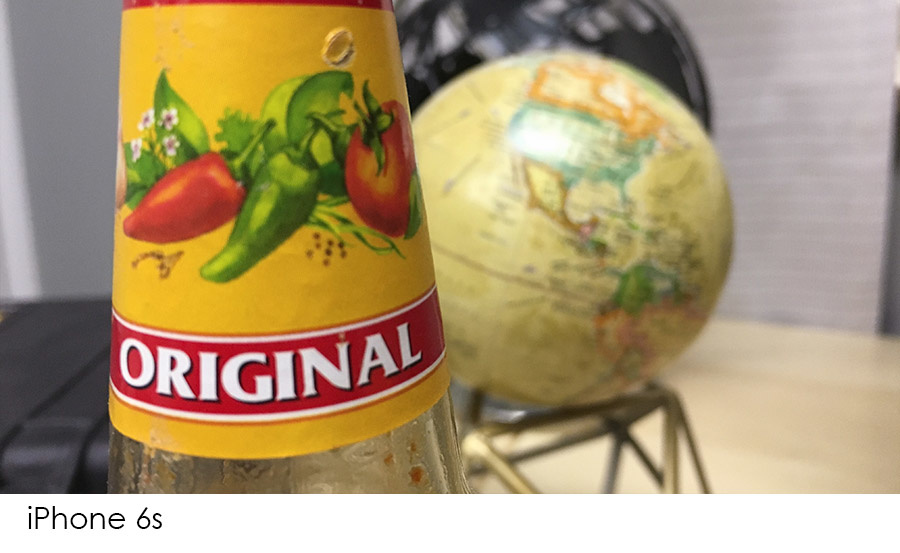 The final picture comparison we made between the two camera phones was their low light capability. The Zenphone has a built in low light feature that is meant to maintain high quality pictures in dark scenarios. We set up some studio lights at their lowest settings and took pictures of our office dog. 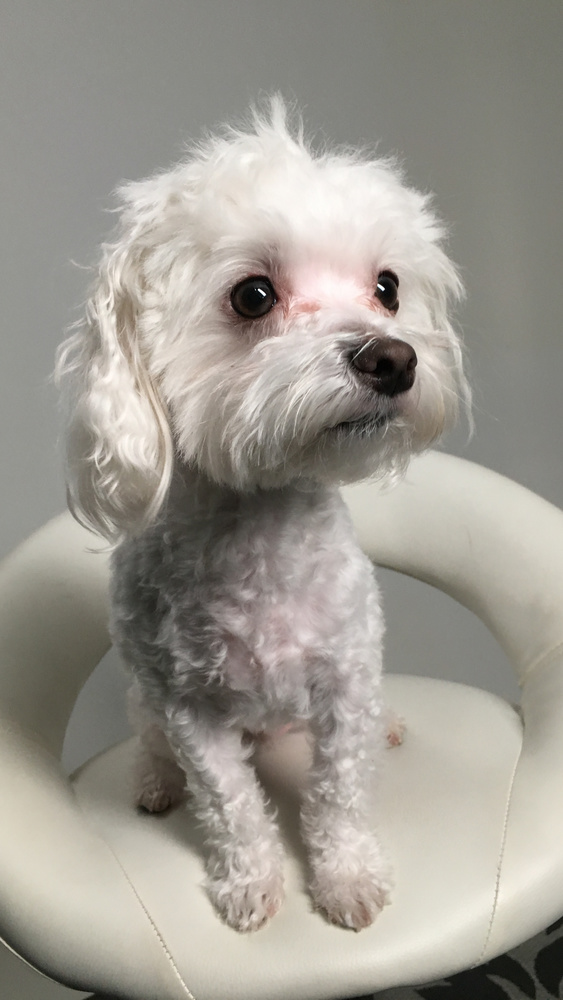 When you crop in to see the detailed comparison, the ZenFone does have far less grain in the image than the iPhone 6s. However, the loss of grain also seems to come with a loss of overall clarity and sharpness. The low light feature of the ZenFone seemed to be a software noise reduction built into the camera rather than an actual improvement in capturing low light images. 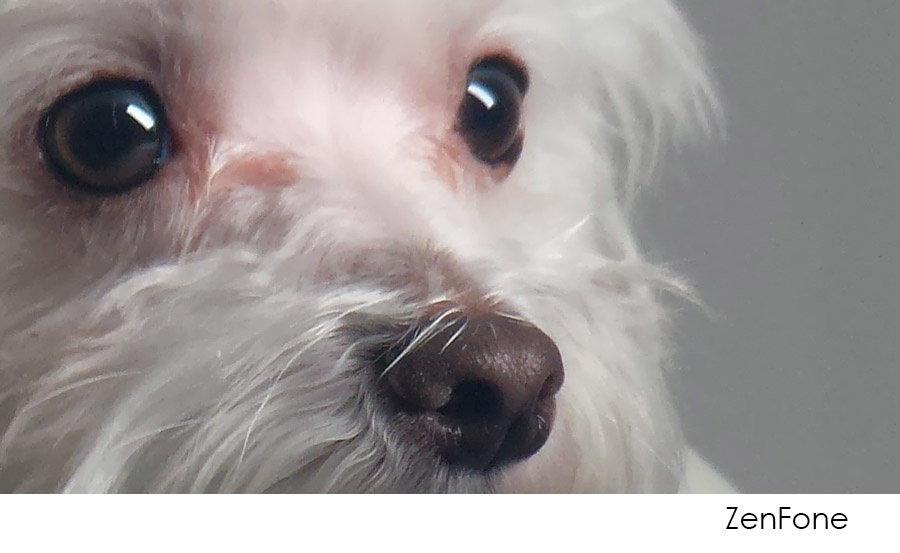 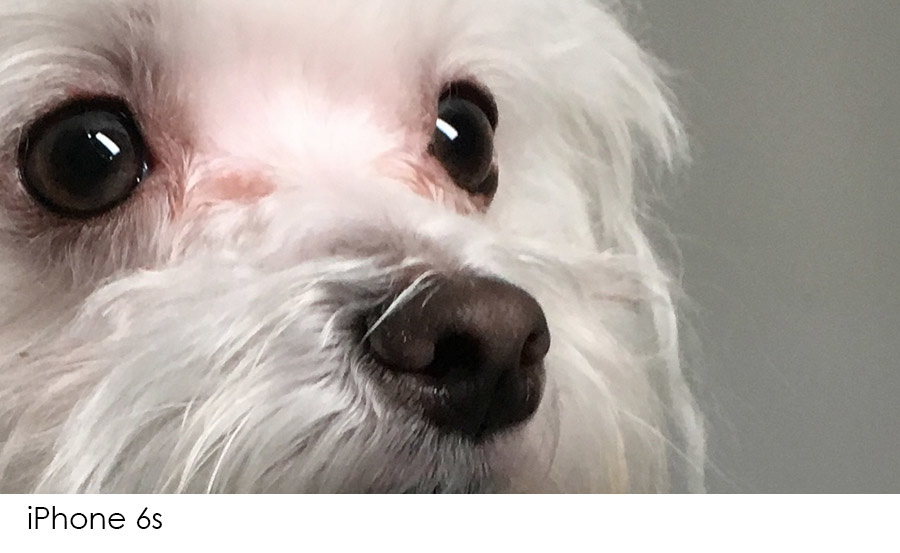 Although the 3x optical zoom of the ZenFone plays a bigger role in the quality of stills, the ZenFone also has built in image stabilization which should give it's video good quality. We put this to the test with a panning and walking shot of the two phones.

The image stabilization of the ZenFone didn't seem to help with video. The iPhone 6s video seemed to have a the typical bounce and movement you would expect from hand holding a camera. The ZenFone however seemed to have very "jumpy" footage for both the panning and walking shots.

One major benefit to shooting with the ZenFone is the built in camera app's manual controls. You are able to adjust, shutter, ISO, white balance, and even focus manually in camera. This is a pretty big perk for amateur photographers learning their trade or professionals locking in perfect settings. The iPhone 6s does not come with this ability natively but there are apps that can be downloaded to manually control all settings except for focus.

One aspect of the manual controls that I should mention is the ease of use. I found the menus and settings on the ZenFone kind of confusing and frustrating to navigate. Although I was able to lock in exposure settings, adjusting them and adjusting focus did not come quickly, or naturally, to me. I often found myself getting frustrated with the focus tracking and other automatic features of the camera and couldn't quickly figure out how to fix the problems.

When comparing the value of each camera phone, the ZenFone provides a much less expensive option retailing right around $400. The cheapest iPhone you can get without any memory upgrades is around $650.

When you break down the perks of each phone, the ZenFone's 3x optical zoom provides much sharper pictures and better photo quality. The ability to manually control all settings is also a huge perk that photographers should keep in mind. Both these aspects make the phone ideal for photographers who want to spend time learning their craft better without having to carry around a separate DSLR or point and shoot. When it comes to video, the iPhone 6s clearly outperformed the ZenFone. The limited options of video settings and underwhelming image stabilization keep the ZenFone from being a good choice if your goal is quality video. 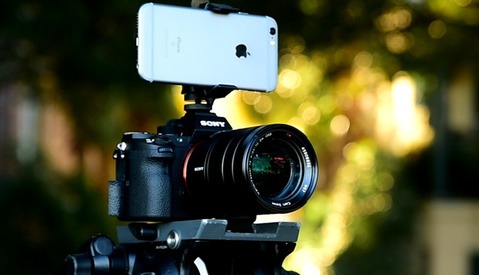 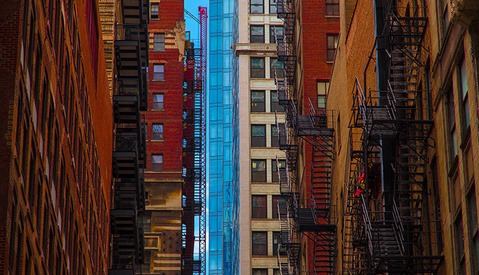 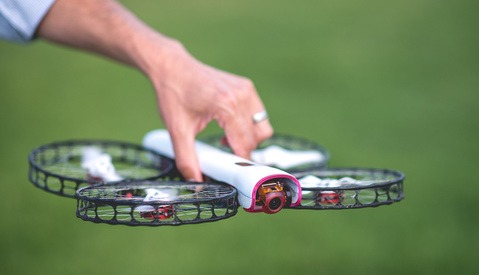 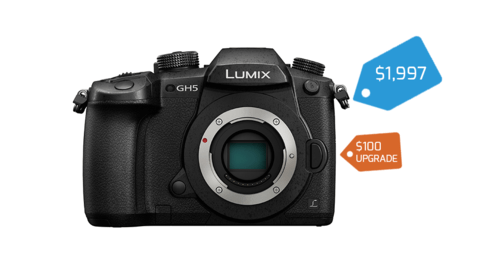 Gear / January 10, 2017
Should We Be Paying for Firmware Updates?
Log in or register to post comments
10 Comments

First, learn when to use "it's" vs "its". Because that's annoying.

Periods go inside quotation marks. It's super annoying when someone gets that wrong.

Then don't read anything published outside America, since it's a bad habit I picked up in Australia, where it can be done either way.

For goodness sake why does fstoppers even mention the subpar iPhone 6s camera ? There are many phones out there with considerably better cameras and with manual controls. The 3 year old lumia 1020 still beats any phone's camera (except for the the even older nokia 808). With regards to recent phone the Lumia 950/950 XL and the LG V10, followed by the Samsung S7 are the current camera leaders.

Even if the iPhone camera was even in the top 3 phone cameras, the simple fact that it lacs any real camera control makes it a non starter

Come on. All those cameras you mentioned are subpar. I owned or tested most of them, and the wb(like the zenfone)is poo! Skin-tones are horrible. Unless you want oversaturated/contrast crap.

Stop hating on an incredible tool.

The main reason why the iphone gets mentioned so much is because it is literally the most popular camera in the world. The number of images taken on an iphone beats out every other camera ever created. It might not be the best but by shear number it is the standard for most of the world.

I understand that, but I always though that you guys were more for quality over quantity. It's not news that often the best products are not the most popular and the subpar camera of the iPhone leaves a lot to be desired, especially when the light starts to go down. A camera phone that gives you pretty much zero manual control over your photos (and it's pretty much the only flagship phone nowadays that does that) in my humble opinion, should not be promoted on a photography website.

On the flipside It would be great if you guys actually promoted the best cameraphones out there :)

While I totally agree that I would like to have optical zoom on my iPhone 6s+, because I shoot so much video I am totally pumped about the quality of the 4k video I am shooting. Without the zoom, I simply walk a little closer to my subject when shooting photos.