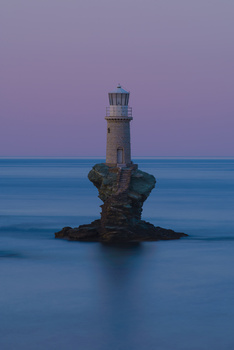 This is a rather unique lighthouse given the Greek lighthouse standards ( plain, boring and usually with ugly fence around them ), it's called Turlitis and is situated just outside the mainland of Andros island in the Cyclades island complex in Greece.

The sunset was very boring, however late during the last minutes of the "blue hour" some interesting colors were brought out in the sky and managed to get a decent capture.