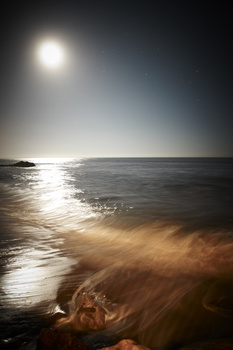 Mercury in Retrograde by Kurt Iswarienko

On first glance one might think this is a darkly exposed shot of the sun above the ocean during a late afternoon…..But a second look reveals some clues that it wasn’t taken during daylight hours. The sun is actually the moon and the specs in the sky are stars in the night sky. The glow on the horizon is ambient light from the city of Los Angeles way in the distance. This was taken in the middle of the night on Malibu Road in Malibu, CA. It’s a very long hand held exposure using a Canon 5D Mark III and a Canon 24–70mm 2.8 lens at around 32mm on the zoom. The warm glow on the water and sand in the foreground is tungsten glow from a practical sconce on my front porch. This photo has not been manipulated in photoshop - it was captured exactly like this in camera.