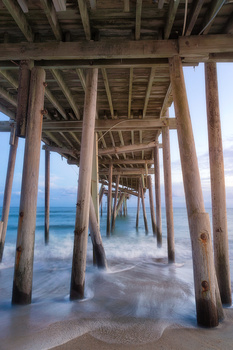 The Frisco Pier is located at the very south end of Hatters Island in the Outer Banks region of South Carolina. My wife and I arrived on the island around 3PM with the hopes of shooting the Supermoon and had heard about this pier from a respected photographer and friend of mine. This particular pier was infamous in the area due to its remote location and destroyed appearance having suffered through several hurricanes in the last 5 years. Unfortunately, a quick Google search indicated that the pier was slated to be demolished in the fall and after phone calls to several local businesses, most of which were closed for the season already; we were unsure if the additional hour drive down south would be worth it. In the spirit of adventure we followed our heart and went for it anyway. Lucky for us the pier was still alive (although not well-its damage was extensive and barely any remained) but the hopes of aligning the Supermoon across its bow proved to be futile. Instead I opted for this interesting composition which showcased the ragged nature of the structure combined with a rising tide which is slowly taking its toll.