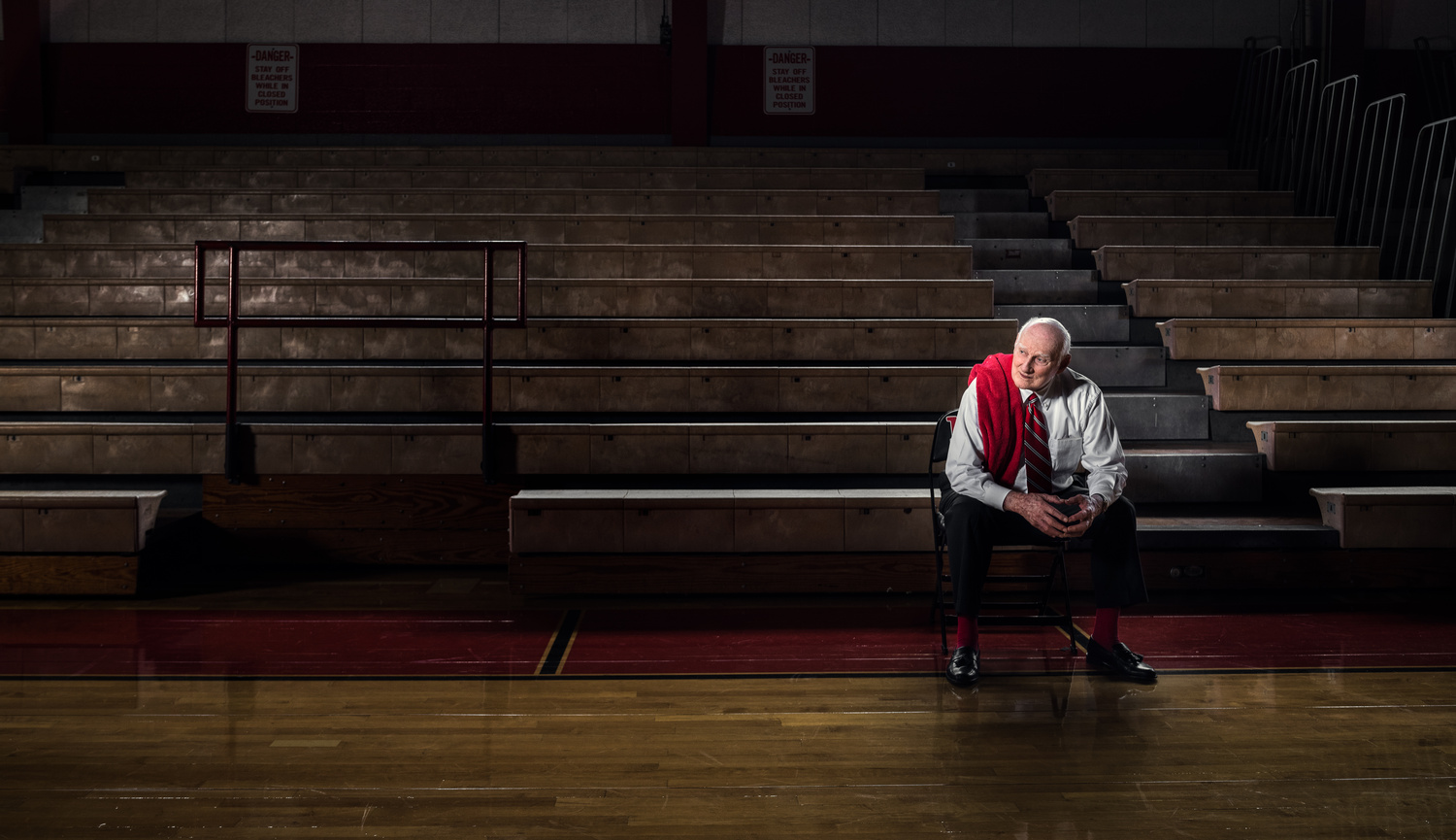 My Grandpa was a high school basketball coach for 30+ years. Growing up, anytime I would go with him somewhere we would run into a former player of his that would talk about how he had changed their life and how much he meant to them.

This image popped into my head two years before I had this photoshoot with him. It was burned into my brain but for health reasons we had to wait.

Ten years before he had suffered a heart attack and stroke. He was dead for a number of minutes before being revived. Ever since he has struggled physically and mentally. Getting him to go anywhere is hard work for him and anyone helping.

Finally a time came when he was well enough. I talked with the school he used to coach at and reserved the old gym for the shoot. Then the day before the shoot he started going downhill physically and struggled with even getting from bed to his favorite chair. I thought we would have to cancel.

My amazing Grandmother got him to the gym. We were worried we wouldn’t be able to get any images because of his condition, but the most amazing thing happened. We got him in the chair he used to sit in for the games and he came alive! He became mentally sharp and was the perfect model. He was having fun! A couple of minutes in there were tears in his eyes and mine as we relived the memories of his coaching years.

Finally seeing the image that had been burned in my brain for years through the viewfinder and releasing the shutter was an experience that words really can't describe. It was more than a dream come true. It was a special day with my Grandpa that I will never forget.

Great story to go with the great shot. Nice work!

This, IMO, is what photography's all about: compelling imagery that stirs an emotional response. Without even having read your story, I was moved. Great work! Would you mind telling me how many lights you used? I always try to dissect how many sources might be in play. I count three: camera far left, camera right (over and rear of subject) and camera left (right of subject) as key light.

Thank you, Robert! Your words mean a lot to me!

You were pretty spot on with the lights! I had 3 strobes setup. One camera left pointed at the left side of the bleachers with a 22inch reflector that had a diffusion sock on it. One camera right coming from the right side of the bleachers with a strip box. The 3rd was camera left lighting my Grandfather with an 18 inch reflector with a 20 degree grid to control the spill. There are also windows up against the ceiling lining the whole wall that acted as a nice back light for the top of the seats and his head.

This is a great capture, Brad. Nice work

Great picture and story. Would have loved an old basketball on the floor or a rack of balls left side of the frame as a "sport cue". Sorry just the screenwriter in me...

Thank you, Lance! Those are great ideas wish I would have thought of them haha!

The image is fantastic! The story is what takes fantastic and turns it into phenomenal! In my opinion, that is what the epitome of photography really is. I think we all enjoy the chance to shoot big, epic, fun, or even quirky images. But when that rare chance comes along when you get to shoot something truly inspiring...that's what being a photographer is all about.

Thank you for sharing! All the best to you and that inspiring grandfather of yours!

Thanks, Rex! That means a lot coming from you considering I am a big fan of the photo you took of Gabe. Talk about inspiring!

You are right, photos like this is why I do what I do. I think it's cool that we have a craft that allows us to share special moments like this with family. And for those moments to be captured in a form where they can be enjoyed for generations.

Brad Coleman
Luke and His Harley
0

Brad Coleman
Inside Looking Out
0