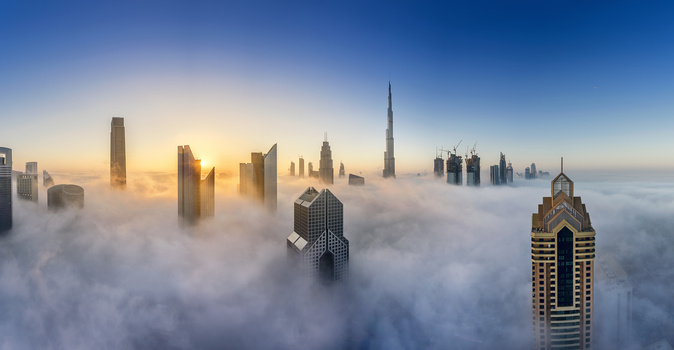 Typically, the phenomenon of the low dense fog covering Dubai in early morning hours occurs twice a year – during the change from the summer to winter and from the winter to summer. In December 2016 we had at least six days when the thick fog appeared, so I could not dream of a better chance to catch it. And I also learnt why these shots were considered elusive the hard way. It involved an endless number of emails and phone calls to go after permissions to book access to good viewing points on specified dates when nobody could be sure in advance the fog would even appear. One day, I managed to get access to the viewing deck of the Shangri-La Hotel in Downtown, which is on the 42nd level. I was present at the location at 5.30AM in the morning as all the weather indicators suggested the fog would be there on that day. It was, but all we could view from the 42nd floor was a complete whiteout, which remained until around 10AM, making our photography session a failure. Between 29th December and 1st January I woke up at around 5AM every morning after carefully checking the weather forecasts the night before. The fog appeared in four consecutive mornings during that period, but there was only one day when it was low enough to allow me to take pictures from a level lower than 70th floor. And I was luckily in the right place at the right time.

This is the final outcome of nearly one month of fog chasing in Dubai. It was the first morning when the fog was low enough to capture it from the 42nd level. Taken on the last day of the year, 31st December 2016.

This photograph is a panorama consisting of 9 vertical shots, each being HDR composed of 5 bracketed exposures. The source file has more than 50 megapixels.