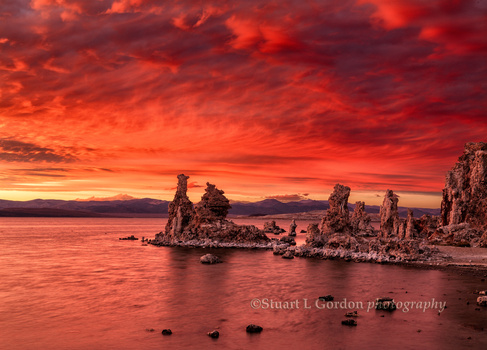 Got to Mono Lake, on the eastern side of the Sierra Nevada in California, early to scout a good location for sunset. Two other photographers joined me at the spot I selected. One was from the Caribbean (a long way from home) with long dreadlocks and the other was from southern California. The SoCal guy had conveniently brought a bottle of rum with him, as he was meeting up with his brother in a nearby town and was celebrating his birthday. As we waited, he opened the bottle and passed it around. It was a fine way to pass the time. We also took bets on whether there would be any color in the sky that evening, or if it would be a big dud. As the sun went down behind the Sierra and clouds thickened, it was clear that betting against an incredible sunset show was going to be a big mistake. The sun ignited the underneath of the cloud cover over Mono Lake. At first the clouds took on a pink glow, and then it deepened to red-orange as the sun sank lower. We had finished most of the rum by then, but I was still functioning well enough to handle my camera settings and a ND grad filter to capture this as proof of the amazing color. Had I told you this story without proof, after all, no doubt you would not have believed me, given the part about the rum and all.