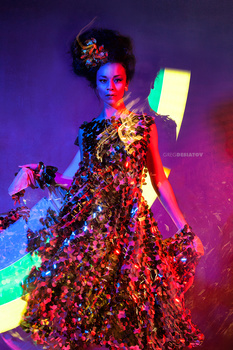 One of the great things I love about photography is playing with light.

All the visual effects in the shot were created in-camera.

This particular image uses a number of techniques.

To start off with, the camera's shutter speed was set at a 1/2 second.

I have a LED batten in the studio which I covered in blue, green and yellow gel to create that 'swing' of light. I also had 2 strobes setup. One setup on each side of Sara and using a blue on the left and a red on the right. The right side strobe was shooting through a window blind and you can just see the effect come through on the right hand side of the image. There was more of the 'blind' effect but I have cropped the image to make it a tighter shot.

During the shoot and with the slow shutter speed, Sara constantly moving and my assistant with the LED batten taped to a broom handle furiously waving around the light, I would slightly move my camera as I fired off the trigger.

This camera movement technique is what created those gold trails. I have no idea what created that cutout ghost effect in the 'light swing' on the right of Sara but I do love that effect.

The dress was created by Matcho from metallic gold round flakes which just added to the overall dynamic effect with all the movement.