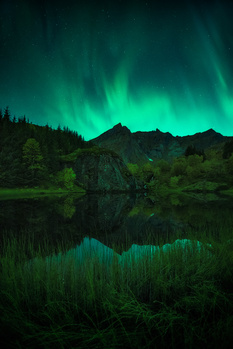 Green fire or just the Aurora Borealis dancing in the night sky above a small lake between a few mountains in the beautiful Lofoten archipelago, Northern Norway.
This was the first appearance of the Aurora Borealis that night, a G1 solar storm had reached the earth boosting the activity quite a lot. It has been a while since I've seen such a show. It just kept on all night!
I did a few different compositions in this small area which has 3 lakes. My head convinced me to use the grass on the edge of the lake as leading lines and I think it works quite okay.
This is the true Autumn colors of Lofoten!