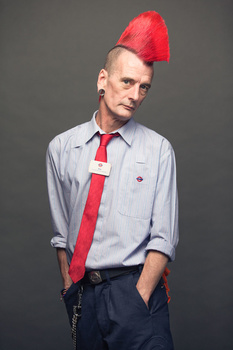 I first saw Greg as he was working on the London underground. I was fascinated by his 70's punk mohican, and wanted to photograph him so much! I gave a card to one of his colleagues to pass on, and he got in touch so that we could arrange a shoot!

I really wanted to show his punk hairstyle alongside his work uniform, and the colour matches perfectly. I shot this portrait against a grey backdrop, using a single keylight with a large octabox in a studio setting. I positioned a sunbounce reflector to his left in order to fill some of the shadows but not all.

We worked on the shoot for a good two hours together, talking, laughing, and listening to ska reggae music!