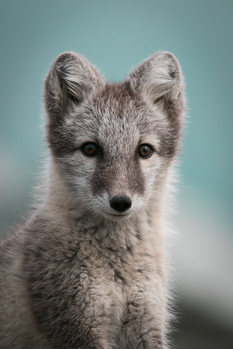 Out looking for the arctic fox at Dovrefjell, and i was lucky enough to meet three of them after some walking around in the mountains. A mother with two cubs. One of the cubs on the photograph.

Dovrefjell is a mountain range in central Norway that forms a natural barrier between eastern Norway and Trøndelag. The Arctic Fox is a small fox native to the Arctic regions of the Northern Hemisphere and common throughout the Arctic tundra.

It is well adapted to living in cold environments, and is best known for its thick, warm fur that is also used as camouflage. In the wild, most individuals do not live past their first year but some exceptional ones survive up to 11 years. Hopefully this one have some good years in front of him.

Dovrefjell is also known for photographing the Musk Oxes.