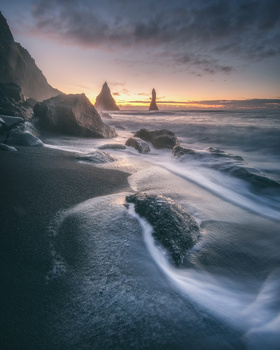 This is an image of Reynisfjara, or better known as the Black Sand beach, located at the southernmost tip of mainland Iceland. Cliffs and surrounding rocks were formed during the last ice age when an eruption occurred under the glacier that was covering the area at that time. The Atlantic ocean that washes these shores has been steadily deforming the cliffside, exposing the lava rocks, basaltic columns and producing black sand.

Anyone who visits the site must always be aware of rogue waves that are prominent there. In the last decade several deaths and numerous accidents have been recorded involving rogue waves.

Spike-like rock formations that are seen in the image are called Reynisdrangar. These are several cliffs, up to 66 meters high and are a popular bird nesting site, with gulls and puffins (during the summer) occupying them.