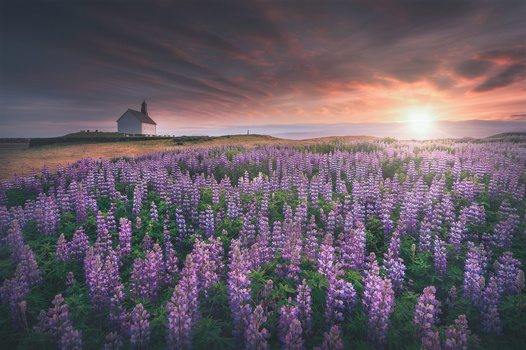 Lupinus nootkatensis, or Nootka lupine is a flowering plant that is hard to miss once in Iceland. It has spread so rapidly, that even within Reykjavik city these plants can be seen flowering during June and July months.
The Nootka lupine originated on the west coast of North America, and is one of the species from which the garden hybrids are derived. It is tolerant to cool, wet summers and are rigorous self-seeders, thus can often be seen along roadsides and in open meadows. Their long tap roots make transplanting difficult, so sowing seed is preferable.
The plant was introduced in Iceland in the first half of the 20th century to combat erosion, speed up land reclamation and help with reforestation. Dense lupine cover and soil fertility can be gained within a relatively short time span, where the growth of the lupine is not limited by droughts. The lupine is well suited for reclamation of large, barren areas because of its nitrogen fixation and rapid growth. Furthermore, it has an ability to extract phosphorus from compounds in poor soils.
In spite of these good qualities, it has a tendency to become dominant and to colonize already vegetated areas such as dwarf shrub-highlands, where it overtakes the natural flora and threatens biodiversity. The plant has spread from the loose, eroded soil in which it was originally planted and is now found throughout the lowlands of Iceland.
The initial expectation was for the Nootka lupine to retreat gradually along with increased fertility of the soil and give way for other species. This is evident on sites in Iceland where the lupine was introduced early, such as in Heiðmörk. However, plant succession is towards a forb-rich grassland, often dominated by the invasive species Cow parsley, meaning that careful management of lupine is necessary to prevent it from colonizing areas where its presence is not desirable.
In spite of all this, this plant is very eye-catching once it blooms, transforming fields into a sea of blue swaying carpet. For photographers it also serves as a special treat, because it can be incorporated with many familiar landmarks for that ‘’wow factor’’.
Strandarkirkja, Reykjanes. Iceland.
Nikon D810, Tamron 15-30mm
www.dzenisphoto.com
instagram.com/kaspars.dz.photo/
ETH Crypto wallet: 0xf6B243167DFf297B578CC62e4047931518670F75
BTC wallet: 35SUVKFr8xfYQEmAnpBVNL9XPLozxoabMT
https://www.patreon.com/kasparsdzphoto