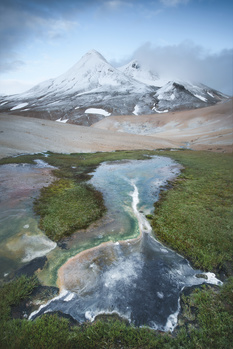 Old Lady And The Queen

Easily one of the most remarkable places in Iceland is Kerlingafjöll or the Old Lady Mountains (named after a rock formation that somehow reminded people of an old lady). For centuries people were avoiding the area and it was also known as The Bad Weather Mountains.
Kerlingarfjöll is categorized as an ancient central volcano that covers over 140 square kilometers and contains two caldera fragments. The mountains have been dated and are all presumed to have formed during the last ice age and are between 336,000 and 79,000 years old.
In this image you can see one of the most prominent mountains in the area called Snækollur, also known as the Queen of the area. It´s close to 1500 meters high and were formed during the volcanic eruptions where silica-rich magma erupted from underneath thick ice.
Until the year 2000, a ski school operated in the area that allowed icelanders to enjoy this winter activity during the summer months. The school was closed down due to rising temperatures as there simply wasn’t enough snow in the mountains to maintain skiing facilities. Some of the summits in Kerlingarfjöll are still suitable for skiing, including those seen in the image, but generally the area is now mostly known for its hiking possibilities.
In the foreground you can also see one of the many geothermal features that are scattered throughout the area. Kerlingarfjöll is defined as a high-temperature geothermal area and is considered one of the most powerful one in Iceland. The hot spring areas mostly contain fumaroles and geysers, with colorful mineral deposits of sulphur and salts and are responsible for the variety of colors.
Anyone who ever ventures to explore the interior of Iceland, should certainly visit this magical place.