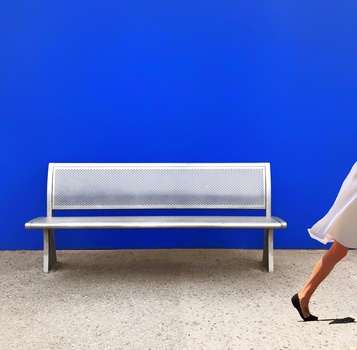 Don’t Pass Me By, Don’t Make Me Blue

I found this bench that I loved at Centennial Olympic Park in Downtown Atlanta. I ran around the park shooting all the benches, but there were people, buildings, trees and other stuff in the way of every one of them. I wanted just the plain bench. As I was leaving, I saw one last bench. They were doing construction behind it, and the construction workers had slapped blue paint on plywood and erected behind the bench to keep people out of the construction zone. I finally got my shot! I loved it; but it was a bit too plain, even for me. I had it in my mind that I wanted to depict the bench as “lonely,” wanting someone to sit on it. I had my daughter walk up and down my street until I got the shot I wanted of her leg, and then superimposed it on the bench photo to complete the composition. I named it “Don’t Pass Me By, Don’t Make Me Blue” on behalf of the lonely bench! It was also the title of an old unpopular Beatles song.