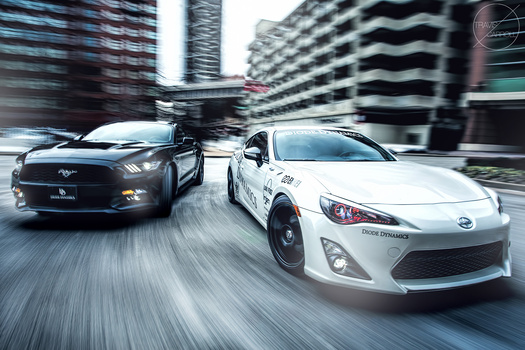 Shot this image in Downtown St. Louis for the Diode Dynamics Automotive Lighting Catalog Cover. Shooting this was nothing short of a nightmare, it was something like 19 degrees outside and pretty windy. We were using a home made rig and took a little longer to set up than normal. Due to cold weather the suction cups were cold solid and the rig ended up falling off the car! Thank God there was no damage, and we were able to break for lunch and get the suction cups warmed up. After a brutal 2 hours of shooting, waiting for traffic, and several stops to warm up, we finally headed back to the studio and got these images on the computer.

For the processing of this image I wanted to give a little bit of a cinematic color grading with not too much contrast. Since the image is for a lighting catalog I had to be sure to emphasize the lighting on the vehicles and added a little bit of a soft glow around the headlights, and fog lights to draw a little more attention to the products.

Shooting a double rig shot was nothing short of difficult. There were two drivers, and one man operating the camera. The drivers had to be sure to match speed, distance apart, and angle in order to keep focus. We probably did 10 takes before we got the hang of it, and then took several more until we got what we wanted. I don't even mind the fact that the Mustang is soft because it doesn't take away from the feeling of the image, and if anything adds a little more validation to the motion of the image.

This image is something I've had visioned in my head for quite awhile, the idea of two cars chasing each other is something I really enjoy, and being an avid motorsports enthusiast it's something I see a lot. Being able to capture it in a still frame was a big accomplishment for myself, not to mention very exciting!

All in all I'm very happy with this image, the client was very happy, and I'm very hyped to keep pursuing these types of dynamic client images!

Huge thanks to Jayson Carey for assisting on this shoot, and Steve Eppy for enduring the cold and driving!

Thanks for the tips Rebecca! I'm definitely going to start making sure everything has a nice description and the EXIF data is filled out! :D

This is solid! Good job

Much thanks dude!! means a lot coming from you!

Fantastic image but I wonder about a couple of things. The EXIF data shows an exposure of 1/1 sec. Is that 1 second? If so, how could you possibly have gotten a sharp image at that shutter speed? Was this lit with a strobe somehow? some kind of gyro stabilizer? I don't see any way this could have been hand held at 1 sec and had any part of the image be sharp.

The camera was on a rig that was suction cupped to the car, while the car was in motion (at roughly 4-5mph) the camera stays in the same position with locked focus creating a sharp image! :thumbup:

Thanks Travis. After re-reading the post I saw mention of the rig. Just didn't know what it was. Sweet shot. I want 'a rig'!

Great! This is a splendid action shot! Congrats!

Thanks Gerd! It was definitely a really fun and challenging shot to make!