Theft is becoming an even larger concern as of late, with videos of lenses being stolen right under the nose of their owners. Certainly, we've seen websites before that look to help put an end to camera equipment theft, and while they work from time to time, they still have some major fatal flaws. LensTag looks to put an end to that, with a new concept on how to track your camera equipment.

Created by Google engineer Trevor Sehrer, and already backed by LensRentals and BorrowLenses, Lenstag is a registry used for all camera equipment, making the possibility to report something stolen quick and easy. By using this registry, you’re able to check to see if a lens is stolen with ease, making the stolen gear much harder to sell (assuming everyones morals are in check).

But the concept goes much beyond just entering in a serial number to prove you own the gear. To prevent spamming of the system, making it virtually useless, the website requests that you also submit a picture of the lens, with the serial number in focus. An employee on the other end will then go through, verify photos, and mark it as ‘Verified’ in your registry. 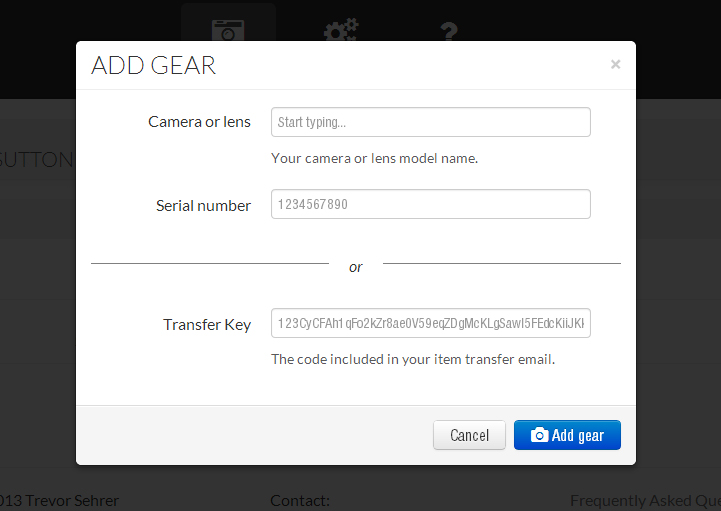 Transferring your gear is easy as well. Assuming they have a free account on the website, you can transfer gear to the respected new owner by simply entering in their email address in the Transfer Gear dialog. This makes for easy transferring, and keeps your gear list accurate.

If you do have the unfortunate event of having to report gear stolen, you can with the Report Stolen Gear dialog. By marking your gear stolen, the stolen listing will be placed in Google searches, allowing people to see that it is in fact stolen gear by doing a simple search of the serial number. This will make checking the legitimacy of craigslist and eBay sales easy and painless.

Sehrer hopes to eventually adapt this system into police databases, and become a standard for pawnshops who have plenty of stolen gear sent to them for quick sales. By pushing this system into the popular public, hopefully camera gear will no longer be a target for thieves.

LensTag is available for use now and free for the public

Deals
The Ultimate Guide to Buying Secondhand Camera Gear in 2019

Thanks Andrew. I hope people end up using it. Maybe it'll put my irrational fear of robbery at ease.

how does it work for used items?

Yup, works the same as new gear. Essentially if you buy from someone else who has the gear on the site, they can simply transfer the equipment to your account, or you can add it, they'll verify with the previous owner, and you're good to go.

But it still wouldn't help if those items were re-sold on websites such as Ebay or private forums. Right?
But it does do a good job at narrowing down the places where the items can be sod.

It could prevent it if the serial number is posted in the sale and someone searches it.

exactly as Zach suggests; any time you buy gear you should inquire about the serial or at LEAST check it upon delivery if they will not furnish it before the sale (I'd be wary if they don't).

awesome!!! Very stoked about this, I registered with Nikon but after the glitch I experienced and the ease of registering/deregistering with different reps, I have NO FAITH whatsoever in their help if someone stole my gear.

Thanks a lot for the tip!
Is there any option to register already stolen gear too?