Merek Davis today announced the release of the image enhancing Mextures app for iPhone. Over the last year iPhone photographers have downloaded Mextures textures more than 200,000 times directly from Merek Davis’ store and tagged 140,000 images on Instagram; now they have an iPhone app to more easily create and share visually stunning images. I have got to say that after buying and playing with the app this morning, this is one that you don't want to miss out on.

“Mextures users have long asked for an app,” said Davis. “I’m excited to let them know the day has come.” The Mextures app comes with more than 70 original high resolution textures made specifically for photographers by photographers. Included are light leaks, gritty and grainy film textures, dusty vintage film scans, tasteful grunge, and gradients created from actual 35mm film scans from various cameras and a multitude of other natural elements. The app provides 12 different blending modes, so every new layer adds millions of possibilities to enhance images. 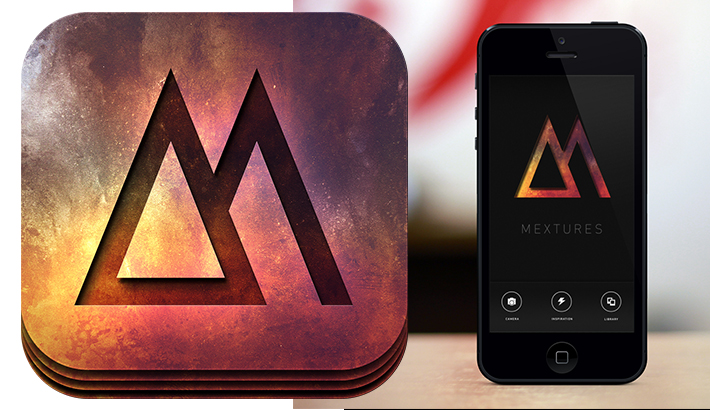 “In addition to the number of textures that come with the app, users will note that the app is built for speed. They can get in, add a texture, and export in under 15 seconds,” explained Davis. “Also, once they’ve created a custom edit they love, they can save it for future use. They can stack an unlimited number of layers, move, hide, rotate, and adjust opacity of the layers and see the results in real time. And they can edit any previous step at any time without having to use an ‘undo’ button. These are features I believe differentiate Mextures from other [image editing] apps.” Check out this introduction video about Mextures as they show just how easy the app is to use.

The app comes with built-in inspiration, showcasing nine iPhoneographers who have created over 40 custom textures combinations. An in app curated Tumblr feed also features a regularly updated stream of some of the most popular images created with Mextures. The app’s launch features a promotional price of just $0.99. Visit the Mextures site at www.mextures.com. The app is available now for purchase in the Apple app store.

One of my favorite features from the app is the ability to create different formulas of stacked layers and then save those formulas to use with other future photos you edit. Other popular photo editing apps such as Instagram require you to use the same set of effects as everyone else, but with Mextures you are able to create your own looks you love and differentiate your photos from the pack. Once finished you can quickly upload your photos to Twitter, Facebook, Instagram or email. The app is easy to figure out and quite honestly has made editing shots with my phone quite exciting again. Here are a couple shots I edited this morning using Mextures on my iPad mini.

The app just launched this morning and it is being offered at a promo price of just $0.99 in the Apple store --- I'd say worth every last penny!

Glad to see Merek getting some much deserved attention

Sounds amazing. Going to buy it right now and try it out!

There are other apps going for more that do a whole lot less! This is the one!

Cool app, BUT WHY ONLY SQUARE CROP!? Not every photo is destined for Instagram...

Hey Troy! I'm the creator of Mextures. I just messaged you on Instagram the 150 character answer, but I can expound a little bit more on here. When I first launched mextures, it was soley to the instagram base, meaning all users that would be using the textures, were already posting square images. Our target audience with mextures has always been the square crop crowd. Now with the app launching, and with me not giving these away and marketing solely through Instagram, we're going to be working hard on a remedy that should make native ratio shooters happy! I really appreciate your feedback.

Hey thanks Merek, You're a class act.

p.s. I'm wishing upon a star that instagram will eventually move away from purely square photos. Panoramic love needs to be shared!

Rock on dude, that was awesome.

Super awesome app though, just love it, but no good for me as I use full frame crop. :(

sounds like full frame will be coming soon. super cool.

Good idea because pixlr-o-matic and some others already offer the options of square crop or not.

Hey Troy, I wanted to let you know that we updated the app to support non-cropped/full resolution editing! Thanks again for being vocal about this issue so we could quickly nip it in the bud!

Thanks for sharing, just tried it out, pretty cool app.

Just fantastic! I got a chance to fly out to Phoenix to meet Merek last month and had the pleasure of checking out the app first hand in beta. It was flawless!!! Just the way he has created this app with such knowledge of edting and the tools used shows he put the time and effort into it and I expect it to become the top app in the app store. Its already at #3 overall!!!! So excited for Merek!

Andrew next time you make it out to Phoenix, holler. We'll all do lunch together.

Would absolutely love that Trevor! Thanks for the invite. I try to make it out there at least once a year to visit my wifes family. I will keep you posted for sure next time I am out there. I had a shoot out there last month and met up with Merek and Thomas Ingersoll. Some truly amazing talent coming out of that state!!!

Yep, we shall all dine with eachother. I just wont get that organic cane juice health drink again. That was just awful. And thanks for the kind words Andrew! You got to see it when it was still rough around the edges!

Yea, how about we skip the healthy route and find a place with some killer burgers or wings!! Healthy is good and all but greasy goodness is better!

This app is amazing. Such attention to detail. Your sample photos btw are awesome. Love that pic of the dude with the mask.

Bought it as soon as it was announced as i was already a fan of his textures. The GUI and ease of use is pretty rad. Still learning the workflow but beats the old way of importing textures into another app to do layers.

Maybe the ability to mask can be a future enhancement? When i layer textures, i generally will partially mask it away from the model to make for a cleaner photo.

Really great stuff- was surprised to see an app out for it!

Would love to be able to mask a layer with a textured brush, just to push the envelope a little further.

Your username.... amazing. Your profile picture is even better. Glad you're enjoying the interface too! I agree about masking, and we are busy working on future updates ;)

When the android version? 'Cause it's coming, RIGHT!?!

Hey Michele! We had no plans for Android, but man, there are a lot of people that are wanting it, so we are looking at options!

i would want it too

I've loved and used mextures on my android ever since the packs were released. Would rather have an android app too. My wife doesn't like to share her iPhone with me. :(

Super impressed. Well worth the purchase.