Guests with phones getting in the way have become a legitimate issue for wedding photographers in the last decade or so, and after just such an attendee ruined a shot of the bride and her father walking down the aisle, one wedding photographer took to Facebook to launch a rant at the phone photographer.

Hannah Mbalenhle Stanley of Hannah Way Photography has gone viral with her recent rant against a wedding guest who stuck their phone into the aisle to get a shot of the bride and her father, ruining Stanley's shot. The post has received well over 100,000 reactions and shares:

There have been reactions on both sides of the coin, with some agreeing with Stanley and expressing their frustration over the culture of smartphones. Others have expressed that while the guest could have been more considerate, they empathize with the emotion of the moment and don't blame them for wanting to take a picture. In recent years, many wedding couples have begun to ask guests to turn off their phones before the ceremony or have taken them away completely at the door in an effort to combat this problem.

Do you think Stanley's post will help stop this sort of behavior?

Posted In:
Wedding
via:
PetaPixel
49 Comments

Lighting / May 20, 2019
How to Make Great Wedding Images in Not so Ideal Conditions

Doesn't look too hard to shop out.

why don't you shut the F up. talking about it doesn't look that hard to shop out. who the F*** wants a photoshopped image of a special moment on their wedding day? hate reading dumb a** comments like this.

Will her outburst help stop this sort of behaviour?

The short answer is no.

Apart from being well outside my competency, a fairly complete answer is probably too long for this forum and could well be the subject of a whole book.

I think the main reason people do stuff like this is a combination of selfishness (I want a picture of this spectacular moment) and lack of consideration (I did not think that my innocent picture could spoil the carefully planned setup for the hired photographer). I do not think that malice is an issue, except for rare occasions.

History has shown endless times that no amount of words said or written can substantially change behaviour like this, otherwise we would not have issues with tailgating and mobile phone use in movie theatres.

So you mean an high end pro doesn't try to have beautiful-looking pictures during the documentary part of the day? Interesting.

Perhaps they don't snipe the couple from that far back....

So just to understand, you do posed shots of the bride walking down the isle with her father? Wow you must be super talented to get all that Raw emotion out of them. Put your phones away people, enjoy the moment.

Firstly. If that’s the only shot he got? It’s not a great composition anyway. Not much ruined.
Secondly. He moved to shoot around the offender. To get the well composed shot? Didn’t he?

Yes?
Non issue. Carry on, just another day’s work in shoot with the phone society.

Not to be overly pedantic but I believe Hannah is a “she”.

I don’t care if it’s a she, he or anything else. My point still stands. There is no issue here if he/she/they were doing their job right, this would have been just another day shooting another wedding. Fair play though. Now the photographer has had themselves recognised by a wider public, for better or worse. Nice bit of publicity.

Rob Mitchell said: "Firstly. If that’s the only shot he got? It’s not a great composition anyway."

Hi Rob. When you're shooting an isle shot from there this angle is common. It's live so the photog shoots what they can, shifts right or left to get them in the middle and can have a beautiful shot post crop. Just curious what other composition should she have from where she stood?

This seems staged? Who holds their phone out and at a oblique angle aimed so conveniently in frame of the photographer and at the same time the culprit (phone user) is also out of the main shot. Trust me most people are like Beluga whales and just stand in front of you with no awareness that they are blocking a shot from being taken. IMHO.

she saw a pro do a Hail Mary shot once with a camera extended and thought that's how you got a better shot.

Of course its staged. Look at the picture on the phone. Its not even the same scene. People are playing right into this person's self marketing plan.

It's the same scene. The reason it looks different is because it's a long (~200mm) lens taking a picture of a phone with a short (~28mm) focal length. It messes with the perspective, but if you look closely, it's the same arch and the same people.

You are correct! Thanks!

No way that dude is her father.

That was my thought too. Could well be all staged to get some exposure. If so then job done.

FYI, I went to the actual post and the photographer did in fact get the shot they were trying to get. They also decided to post this rant as a just because. There was also someone who took the time to Photoshop out the arm and phone and then afterwards, the photographer said they actually obtained the photo.

I can understand the frustration from the photographer, (Even though I'm not one), but she could have at least informed everyone that she did in fact get the photo.

That was intellectually dishonest to make people believe this moment was completely ruined.

One of my rants in my small world, the decline of simple ethics, well mannered guests. Not sure this can be stopped in the wedding world, unless the bride and groom clearly state to guest no photos taken unless from your seat , not isle grabs or leaving. Perhaps some visible signs to hinder “wildcatting” shots. I am safe from this, because I cannot take the stress of big weddings anymore. Best left to younger folks or a seasoned wedding photographer with large staff. Proper boundaries have all but left the wedding world, I shot a sunflower shoot yesterday. The farmer, a gracious couple gives free access to his sunflower lands. I was so pleased that all the photographer and other folks preferred one another and gave room to all so that we could ‘get that shot” . Heart warming it was. 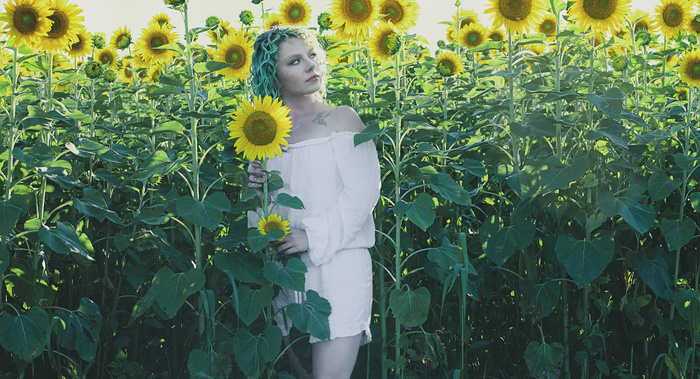 Selective colour onlybreally works when pnly a small part of the image is coloured, not 90% of it...

As a photographer, whether you do weddings, journalism, portraits etc. You have to be quick on your thinking and light on your feet, be witty and direct. The moment this happened she could have done many things differently! Include the smartphone, step a few steps to the side or in front of it and have them stop to take the shot

It's not like people asking guests to don't shoot pictures at the church is super effective.

I was thinking it was a shame that the groom - no way that's the Dad! - couldn't have made that extra little effort and got a suit that fit...

The bride probably made him take off his baseball cap before the walk. Could be the first time he has been in a suit since his own wedding. And maybe that is the same suit. Party on.

Well whenever this happens to me i go straight for the phone screen shot and then back to thd bride and groom. No need to cry about it. Plus you get two good shots.

Ah, it happened to me once too when I asked the guest to please lower her phone she did not listen. I just walked towards her and stood next to her so she could not take a photo. I signaled to the bride to stop and I took a few photos.

I smiled to the bride and signaled her to move forward, the guest never did it again.

I always used either the 24-120 or the 24-70 when shooting the bride coming down the aisle, this way, I can be close to the bride if needed.