We all know Red Bull photographers capture some amazing extreme sports photos, and Dan Vojtech is no exception. He recently photographed Extreme Pilot Martin Sonka, using a set up of 30 Fomei S600 DC strobe flashes. Watch the video for a quick behind the scenes look at how he got some amazing shots. 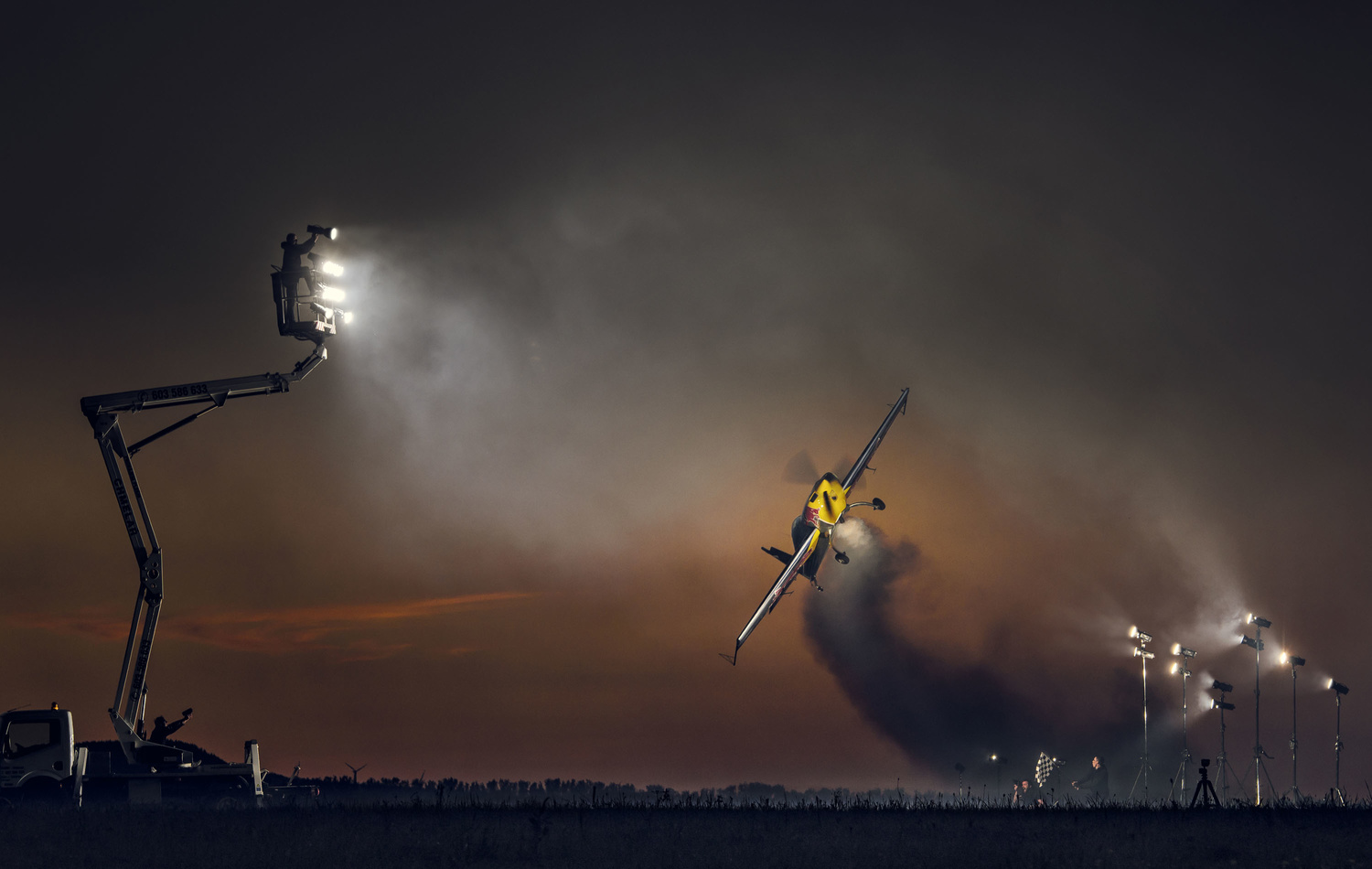 Dan Vojtech started shooting photography when he was a kid and found his dad's Zenith-E. He skateboarded often, and started shooting the sport, and now look where he is. An Official Red Bull photographer and Nikon Pro Ambassador, and has been shooting professionally for the past 10 years. That being said don't give up on your dreams kids.

Vojtech wanted to shoot Sonka in his airplane in motion, but with a different look than the typical airplane shots. He wanted a more studio feel, an easy task for shooting skaters and other athletes. The dilemma: the airplane is 9 meters long (about 30 feet). How in the world would you build a studio big enough for an airplane. 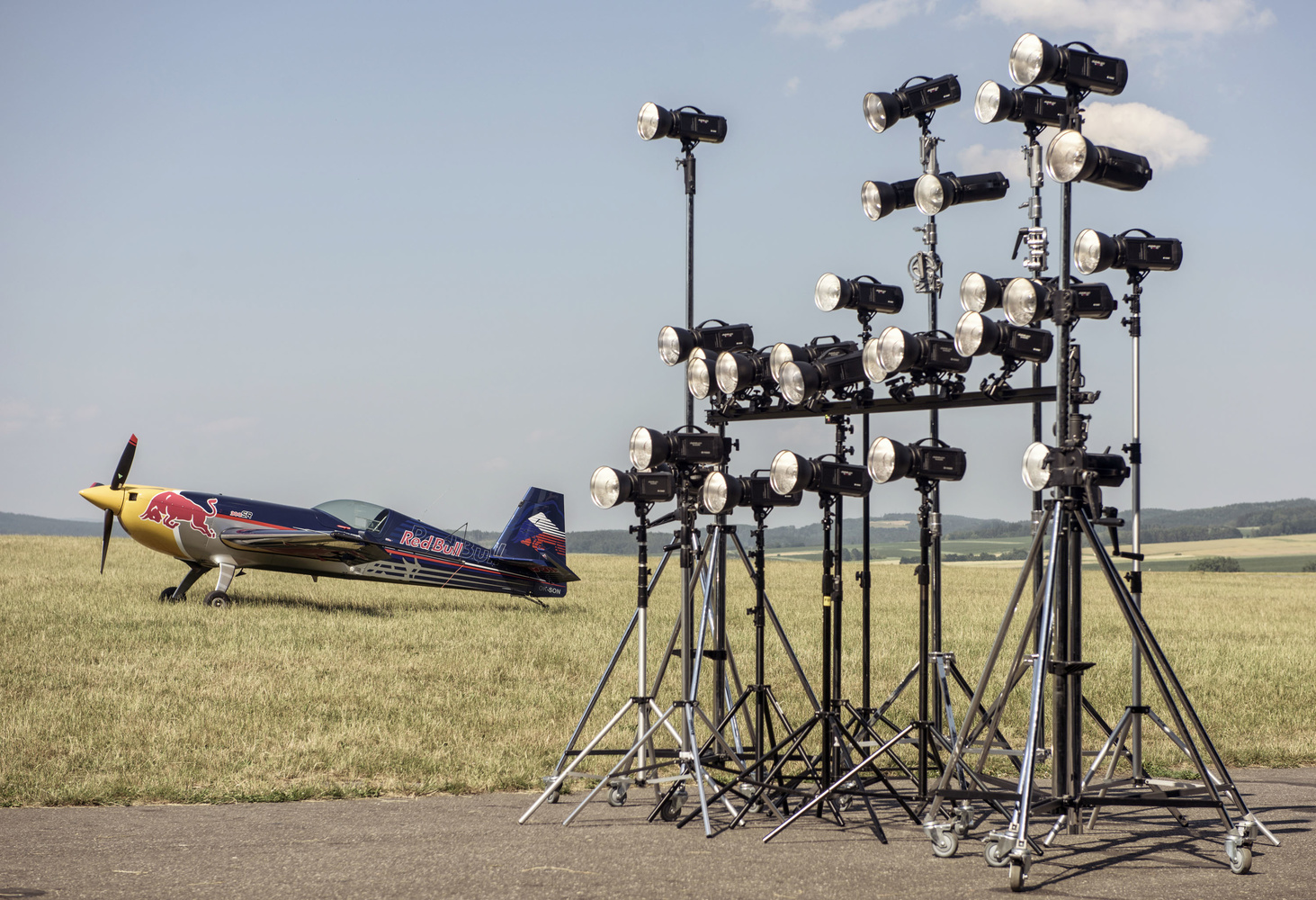 Vojtech had a decent sized team to help him set up the outdoor studio. He rented a lift platform to get 15 strobes above the airplane as it flew by, and 15 strobes on the ground, 15 meters apart. Sonka flew through them. A 9 meter plane through a 15 meter gap, upside down most of the shoot. Also, just so you know this airplane flew 100 feet in half of a second. Talk about high speed sync! The shoot took place during sunset, and the strobes were set on full power to give the set a nighttime look. 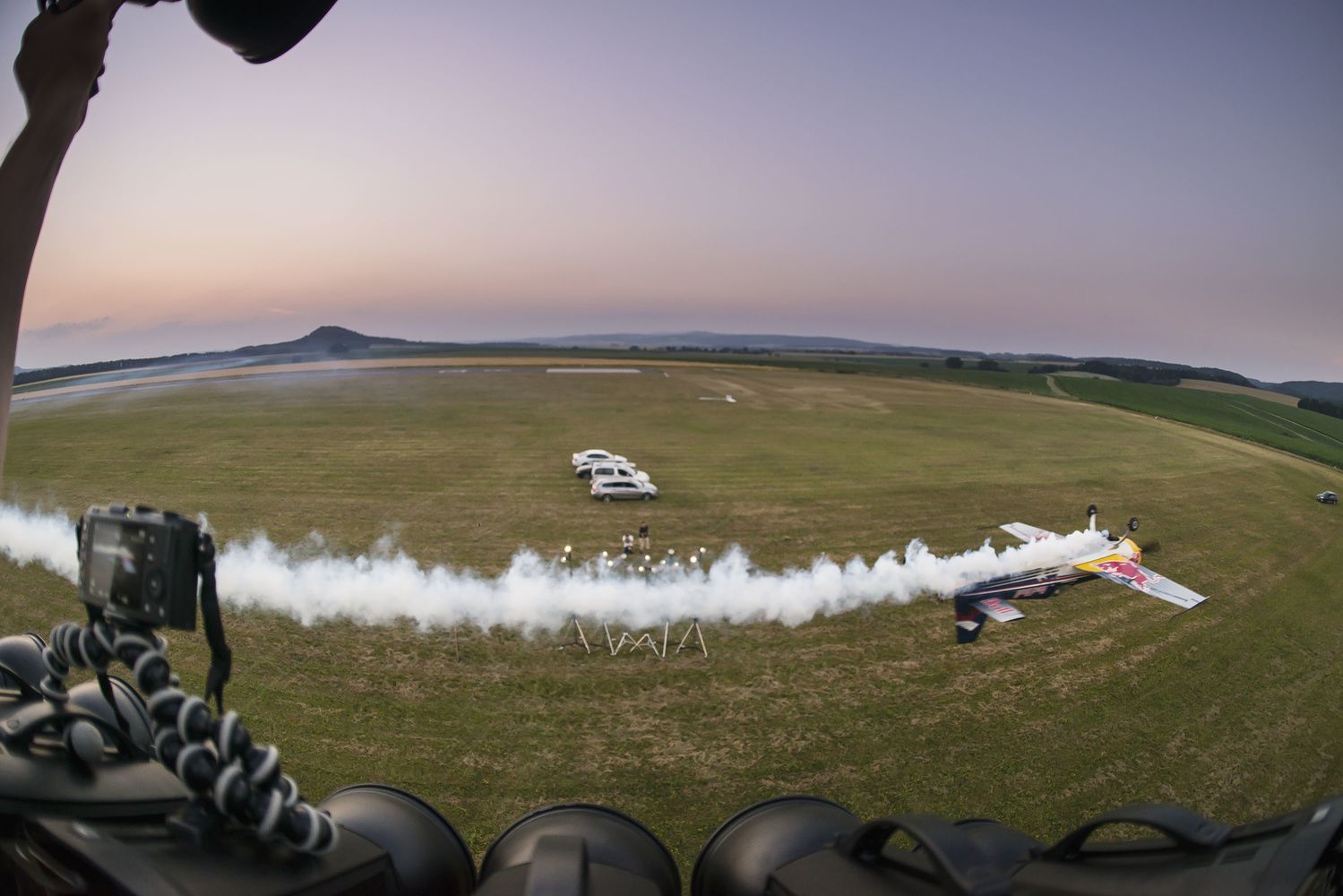 He took artistic license and wanted to leave the platform and lights in frame to give a "behind the scenes" look and feel to the shoot, but also captured some amazing solo shots of Sonka flying. 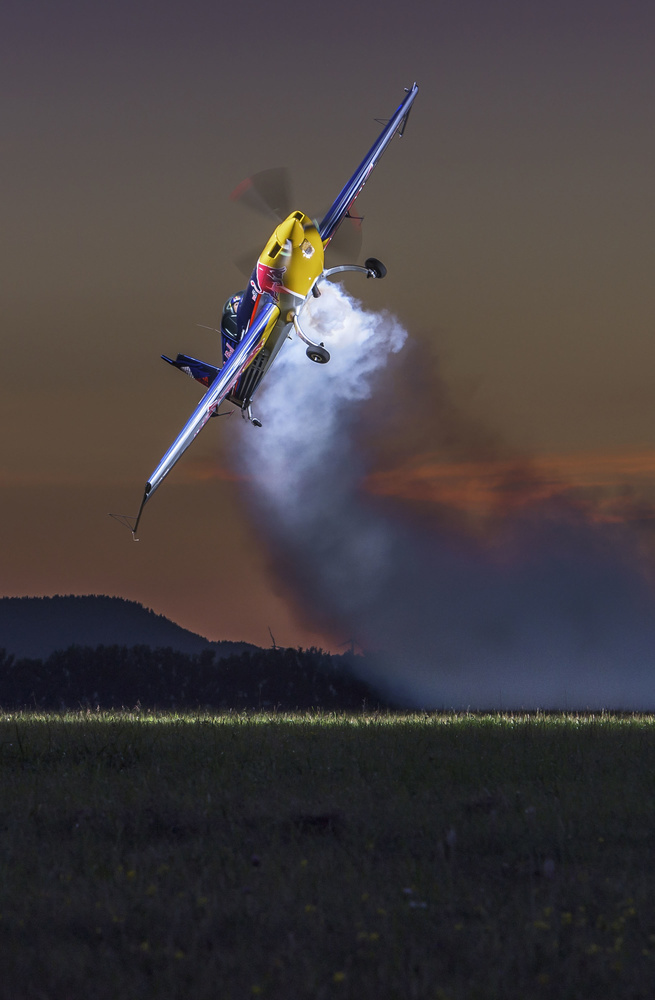 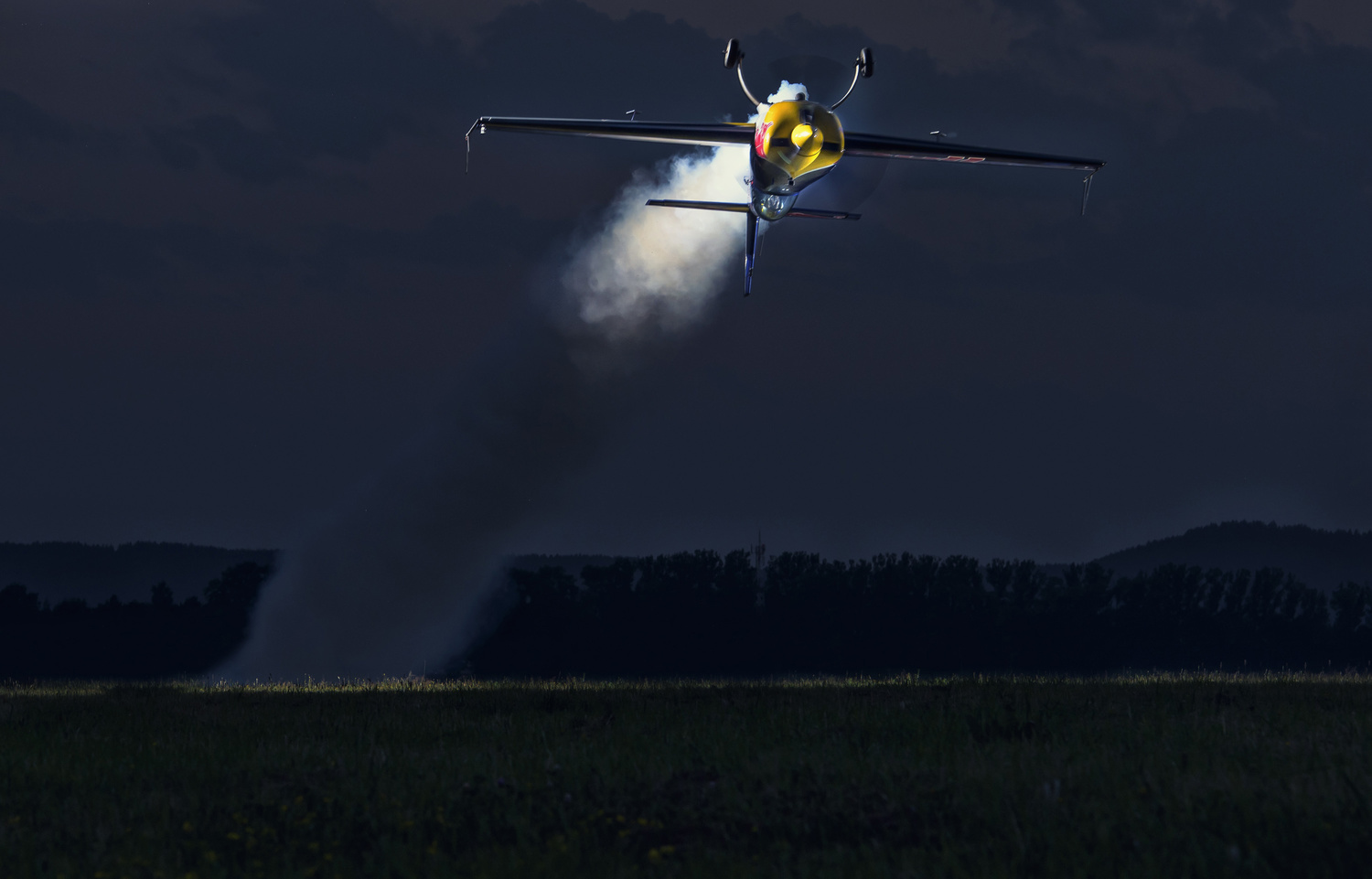 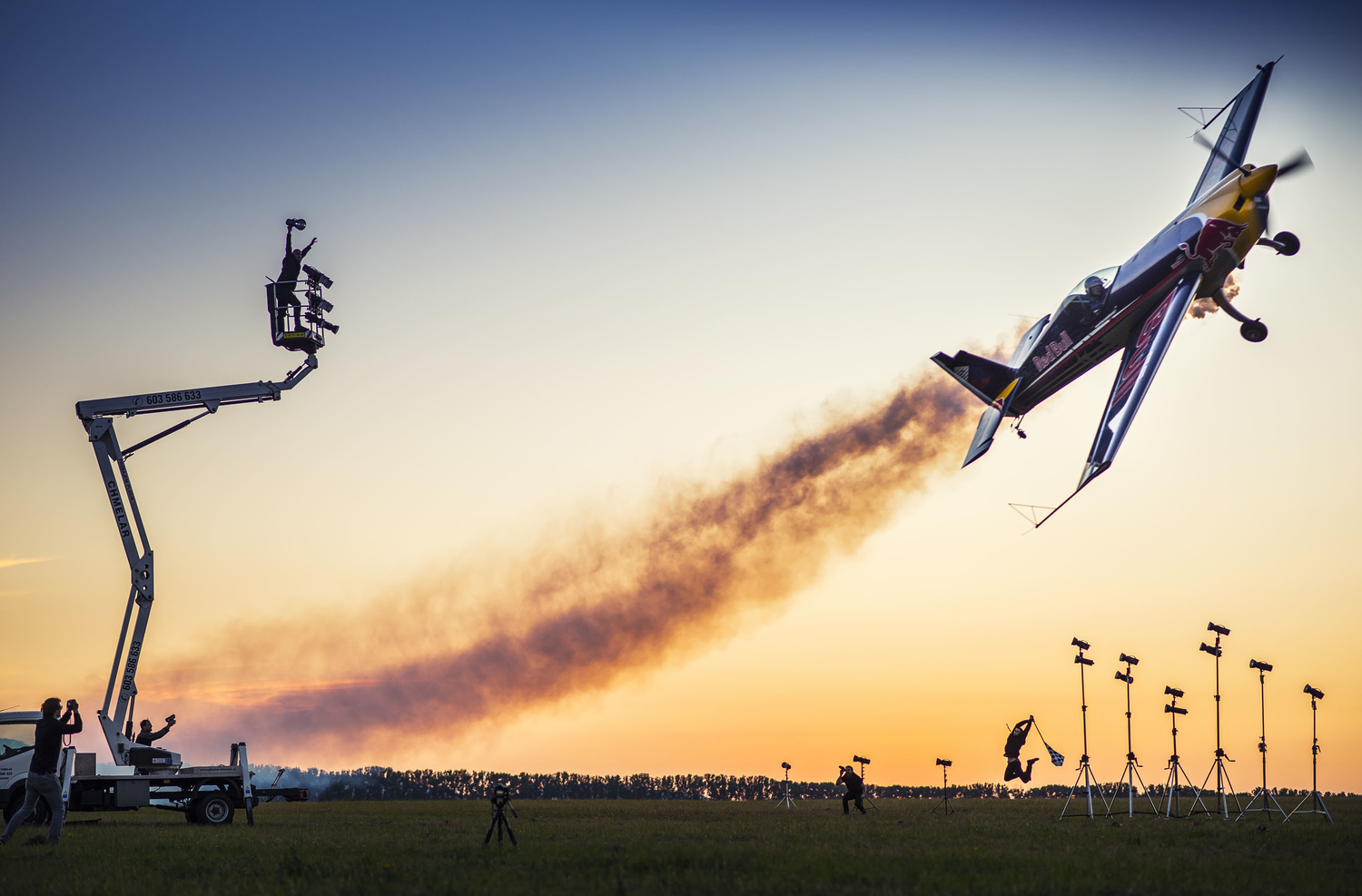 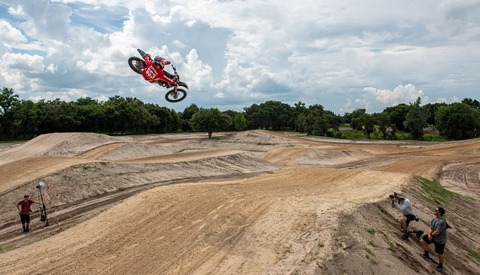 Sports / July 23, 2018
Elinchrom and Red Bull Are Teaming Up for a New Ambassador Program 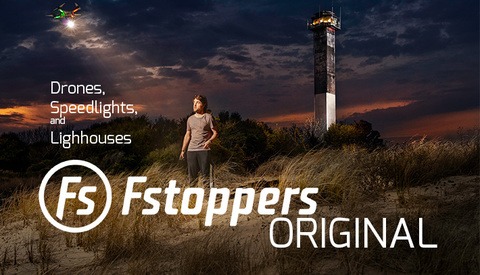 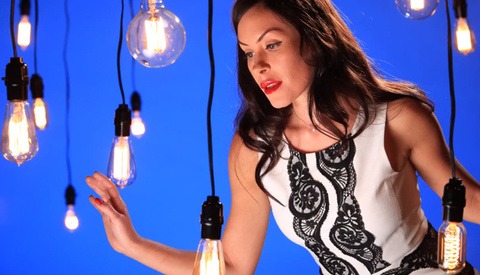 Studio / January 10, 2014
How To Balance Strobes With Constant Light Like a Pro

This has nothing to do with high speed sync. Awesome nonetheless.

While I feel the author used that term as an intended pun, you're 100% right. EXIF data on the images shows that these shots were actually all at normal sync speeds of 1/250th.

I also agree that (while I could be missing something here) 30 strobes seems excessive, unless they were spread out to give a wider area of capture. Apertures around f/8 don't seem that tight, given the relative proximity of the strobes to the plane...

Major props (no pun intended) to the pilot as well for flying through such a bright burst of light at such low altitude!

Super low altitude flying, yep...but I don't think the strobes would really affect the pilot (much). Firstly they are going off perpendicular to his flight-path, not in front of his eyes. Secondly, these guys constantly deal with flying into and out of harsh sunlight during their aerobatic routines. I'd say they'd be used to flashes of bright light entering their vision. But perhaps the low ambient light level and then getting the strobe burst...maybe it was harder than I think.

I kinda got reminded of this shooting I saw a few month ago.
http://www.profoto.com/blog/videos/yuri-arcurs-blasts-30-000ws-of-flash-...

But the Red Bull shooting looks like the shooting of Yuri, on steroids.

It sure seems like 30 strobes is really excessive for a shoot like this, unless I totally don't understand what's going on. It looks like they were shooting in low-ish light, so they weren't overpowering the sun at midday. Shooting with a great camera like the D810, they could have bumped up the ISO and used the strobe at lower-than-full power, which would have eliminated the motion blur you can see in the images. Those strobes have a flash duration of 1/416 at full power which is very bad for something moving so fast.

I think an opportunity to do an awesome shoot like this would be incredible and I'm not just trying to shoot holes in their shoot from my seat here on the internet, but it seems like they went about doing it in a pretty bad way. I'm not trying to be a troll, I'm just trying to reverse engineer their process to learn from it. He's a Nikon Pro ambassador and official Red Bull photographer, so he's obviously not an idiot. Any thoughts?

I'm thinking they probably wanted some motion blur. Action shots, to me, without some smart/selective blurring don't give a good enough feel of motion. I think they made a great choice.

I don't disagree about wanting some motion blur, but I have to imagine that that would (definitely) not be the way to go about achieving it if that's really what they wanted. Controlling that with a shutter is much more precise than the motion blur from a slow flash duration. Slow flash duration blur is, IMO, almost never good looking, it just looks like an accident.

If ever a situation called for packs and heads, this was it. Four Speedotron 4800w/s packs driving four heads could have accomplished the same thing.

That's so sick...
NEXT LEVEL

I am not a photographer but I am a pilot. The dark background photos are other worldly and give the illusion they were taken in darkness. If this was to be done at night the pilot would require at least 30 minutes to recover his night vision. This was a very creative way to capture the effect without endangering the pilot, BRAVO!