Did Instagram Censor a Parody Video Because of Cat Shaming?

A viral video parody making fun of an unusual-looking cat was allegedly removed by Instagram because it was shaming the cat. Really?

With its 400k followers, Wilfred Warrior is just another Instagram celebrity feline. But unlike fluffy ragdolls or cute Bengal cats, Wilfred, a Chinchilla Persian owes his fame to his particular appearance. See for yourself.

But other than Wilfred's unusual looks, this animal seems very nice and friendly based on his Instragram feed. His owner also confirmed that Wilfred is perfectly healthy. But when American comedian Michael Rapaport discovered this cat’s existence, he decided to create a parody video where he added his own voice over the footage.

Here is the original video posted by the owner of the cat:

And below is the voice over parody created by Michael Rapaport (beware the strong language):

But it seems that the parody video was removed by Instagram. According to Mr. Rapaport, Instagram “took that f***ing video down because they said I was shaming, somehow or another, it’s shaming. I’m shaming a f***ing cat.” Adding that “We’ve reached a new f***ing low on Instagram.”

However, the screenshot of the video removal notification message showed by the comedian doesn’t explicitly mention cat shaming as the main reason behind the withdrawal of the video, even though it states that “content that targets private individuals to degrade or shame them” can justify this type of action, among other things.

At this point, there are several possible causes:

Generation Snowflake want to rule the world.
Serieusly I think its the buzz and Fstoppers is helping this buzz. Very ugly adorable cat btw.

Title "Did Instagram Censor a Parody Video Because of Cat Shaming?"

That's why I hit the comments first half the time. For Shame.

The title of this article is a question. The removal notification message mentions shaming in general terms but not cat shaming explicitly. So we don't know what happened exactly, that's the problem.
The story may seem irrelevant but the point is that FB/IG can remove content whenever they want for vague reasons. A cat video is no big deal but what's next?
This is a dangerous trend because a company with a massive monopoly in the social network world can decide what is good or bad to publish and censor. I would add hypocrite knowing how Facebook handles all its PR problems and ongoing scandals lately.

The removal notification likely mentioned MANY reasons, one of which is shaming. It's typically how they work - they have a list, and they send out a form email listing all of their list. So, are you ok with them removing racist material? Sexist material? Material promoting violence? How about shaming? You ok with people posting material shaming others?

That's the thing about companies - they have reputations and employees and investors and so on to protect, so they're going to monitor content and sometimes censor things, even if you like them, or if you disagree. You signed up for that, and your choice is to play by their rules or go elsewhere. You want unfiltered content? I suggest 4chan.org. Or maybe gab.com.

Yes, 4chan is great with breitbart "news" and Pepe the frog alt-right memes. I'll see you there.

I wasn't endorsing, but rather illustrating what happens when social content is unmonitored - the worst filth in humanity comes out.

I was agreeing with you because of the clickbaitness tendency of writers here, BUT found the post where the voiceover guy show the reason the video was removed, and it supports the title. SO just a little bit clickbaity. 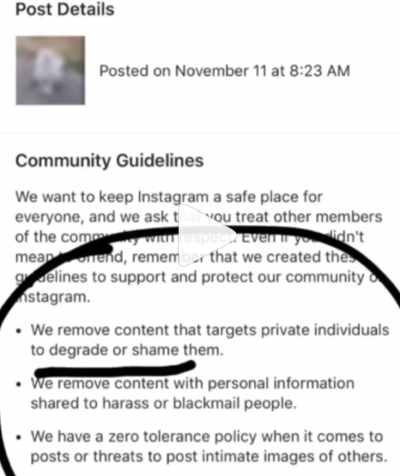 To be fair, I should have included my point about censorship more explicitly in the article. Right now it kind of looks a little bit click bait.

Right now no one cares much about this particular story but when FB/IG will start to censor more stuff for dubious reasons, damage photographer business because of this and that, perhaps people will start to care.

Private business. Freedom of expression does not apply. If you don't like it, hit their wallet and stop using their service.

Governments "censor." Private businesses exercise their rights to freedom of expression and control of their own resources.

Yet when outright pornographic content on Instagram is reported they always say that it is allowed. I think ever since FB took over IG the reporting system broke.

Actually, the number of even the slightest nude photos taken off FB pages is alarming. They have no problem with beheading and shooting scenes though.

It's crazy. I reported some pretty graphic images on IG this past weekend and only 1 was removed. Everything else I guess they like seeing. One the the items that they didn't want to remove was a graphic video of a dog and a chicken. So gross.

I am not sure why they do not care about violence and graphic videos. At time when ISIS was pretty much killing everything on site there were hundreds of very graphic videos of killing people. Like you, many were surprised FB did not remove them even after complaining.

I just saw this article on DIY Photography:
https://www.diyphotography.net/you-cant-post-your-nude-photography-to-tu...

It illustrates the growing "war" of US based social media platform against nudity or even suggestive nudity.

That's really strange. Funny thing is that social networks attack and censor conservatives all the time yet allow graphic posts on their platforms.

That's the US for you..the human body is considered obscene, but treating it obscenely isn;t.

Have you heard about "cat breading"? Look it up on internet, it's real...

Cat shaming? Maybe. Or maybe the 20 or more times this guy says "fuck"?