Eagle Battles Fox in Midair During 'Dramatic Act of Thievery'

Nature Photographer Kevin Ebi was tracking a young fox with his camera Saturday while it trotted with a rabbit in its mouth in northwestern Washington when he heard the screech of a bald eagle behind him. Knowing what was about to happen, Ebi focused in and readied himself to capture what has quickly become the most widely shared photograph of his career.

The eagle, which had spotted the young kit carrying its prey, swooped in, looking for an easy meal. The fox, though, refused to let go of the rabbit, as Ebi had expected. The eagle pulled the rabbit and the fox 20 feet into the air and struggled with the fox for about 8 seconds until it finally wrestled the rabbit away from the kit.

"My shutter was somewhat slow because I had been panning along with the fox and I wanted to get a little motion blur in the background," he said. "Bald eagles can fly 60 miles per hour, so I knew I didn't have time to change my settings. I was bracing myself hoping for one action image of the fox dropping the rabbit as the eagle approached. I didn't have very high hopes because the shutter speed was wrong for what was happening." 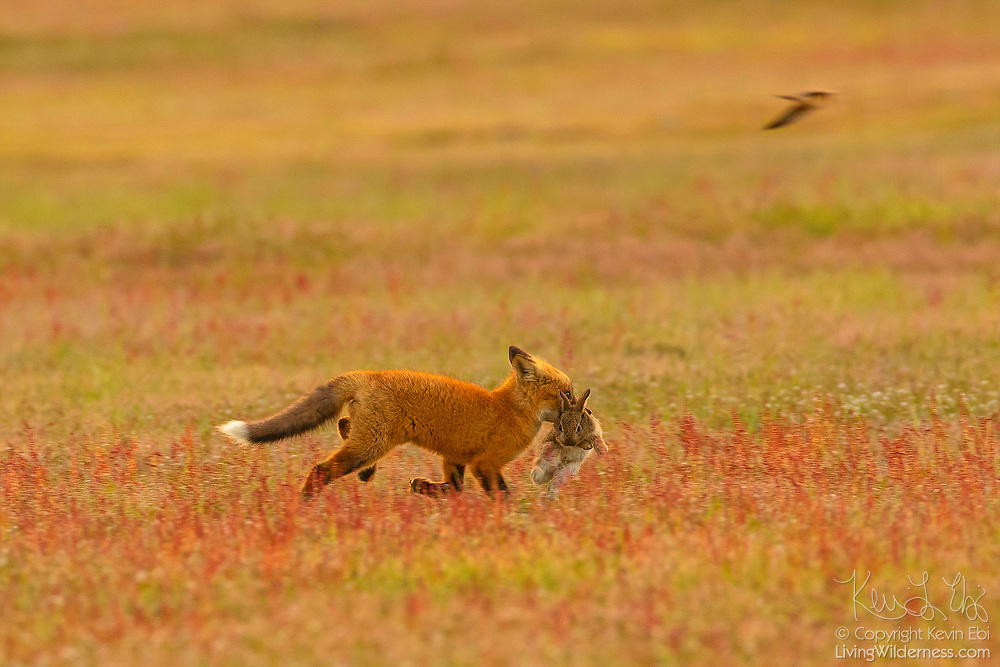 A young fox trots with its prey in its mouth, unaware of the impending danger that is coming its way from above.

The image is similar to the "one-in-a-trillion shot" captured by Doc Jon in Florida a few weeks ago, where an osprey carried a shark which had a fish in its mouth. Unlike that shot, however, Ebi said the eagle never intended to eat the young fox.

"It looked like the eagle got part of the fox's head with its talon, the scruff just behind the fox's ear," Ebi said. "The eagle was trying to shift the payload around to get the fox into its left talon so it could drop it. As you look at all the images individually, you can see that's what was going on here."

Ebi said the encounter largely took place about 5 to 10 feet above the ground after the eagle's initial swoop carried the trio to a height of 20 feet. Ebi was relieved to finally see the fox drop safely to the ground.

"It dropped to Earth and ran back to its den," he said. "It looked like a normal fox, like nothing had happened. I tried to get some shots of the left side of its head, where it was snared, and there was no visible damage. I was relieved to see another kit come over and playfully bat a paw at it. It batted back, though it wasn't as active as it had been before."

More than that, he was relieved to have captured it all.

"Getting the shot was a sense of relief," he said. "I'm a nature photographer and I need to create work. When nature hands you a gimme like that, you need to do something with it. I would have been crushed if I'd been handed something that incredible and came away with something that couldn't be used. I was relieved to be able to do my job."

Ebi, whose photographs have been printed in Outdoor Photographer magazine, National Geographic, and even a U.S. postage stamp, among many other publications, was spending a few days shooting in San Juan Island National Historical Park in when the stunning scene unfolded before him.

Ebi is working a project involving foxes and had already spent the morning shooting them as they frolicked and practiced hunting. After taking a mid-afternoon break to avoid the distorting effects of the heat waves between himself and the fox den, Ebi returned to try to capture some more images as the golden hour approached.

Set up with a Canon 1D X Mark II, a Canon 600mm f/4L, and a 1.4x teleconverter, Ebi was able to maintain a discrete presence while capturing the action. Shooting in aperture priority mode, Ebi said the shutter speed during the confrontation varied between 1/160 and 1/320 of a second. As such, he didn't expect to capture such an epic photograph.

The slower speed worked to his advantage, as it captured some motion blur in the wings of the eagle, which Ebi said makes it a stronger, more dramatic image. 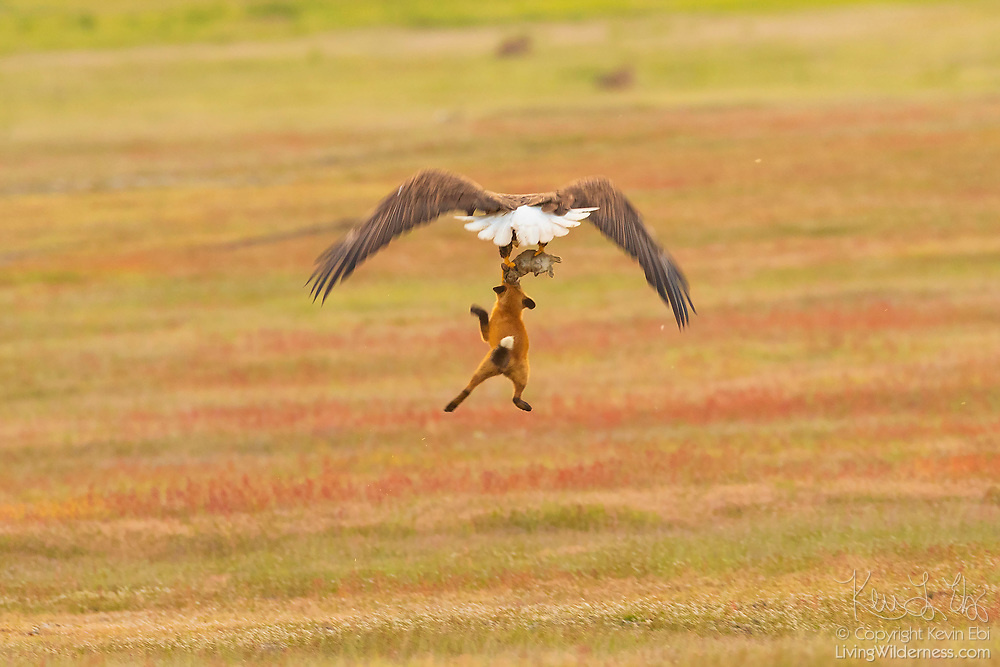 A bald eagle hauls a young fox and a rabbit into the air during a dramatic encounter that ended with the eagle taking the prey and the fox returning safely to its den.

"When I looked at the LCD screen, I was surprised to see I had captured the entire sequence and most of the 80 images were sharp and in frame," he said. "I couldn't believe that, not only was I fortunate enough to witness that, but to have captured it, too. I try to tell a story with my images and this image really tells a story. As a nature photographer, you can capture some pretty pictures, but as far as telling a great story, this is the top of the pyramid."

Ebi wrote a blog post on his website, in which he called the encounter a "dramatic act of thievery." He shared it on social media and the worldwide response was immediate and overwhelming. Ebi has since received interview requests from as far away as Russia and has seen his email inbox fill up. He said he hasn't yet had time to go through all the comments on his Facebook and Instagram feeds.

The response was especially stunning to him because while previous images he's produced have received widespread attention, they typically have taken much longer to gain notoriety. His image of Hawaii's Haleakala National Park went largely unknown for nine years until a photo researcher spotted it and decided it would be a perfect commemorative stamp to mark the 100th anniversary of the National Park System.

"There was a ton of media about that. A ton of people wanted me to sign their stamp sheets. I figured I'm probably never going to top that," he said. "But it feels like everybody has seen this one."

"It's so different from the way I normally work," he continued. "Normally I work on a project for several years, creating perfect images to advance the story, working with editors and curators to make sure the package is strong and telling the story in the best way possible. This was a dramatically huge shortcut. My bald eagle book, for example, took five years of field work, the editing process lasted eight months and I spent several months developing a presentation so I could talk to groups about it. This is completely crazy to have this incredible exposure happen in a few days."

He said his wife of 13 years, Jennifer, knows better than anyone how hard he works to capture the images he creates and how long it usually takes before they gain attention.

"She's been really excited watching the attention this photograph has been getting," he said. "At times, I think she's more excited than I am. Probably because she doesn't have to respond to all the emails."

That's incredible! I clicked over to his blog and looked at the images in the sequence and it's pretty cool to watch it unfold. The first picture at the top of this article (and his blog) is by far the most impressive of the group, though. WOW!

I saw a video of the event...
https://www.youtube.com/watch?v=HQNh9Adg3L0

Cool. Glad they got it on video.

WoW! What a shot!! incredible!

Gotta feel bad for the little guy. So adorable at that age.

Pics and video is better than any home/family move, scripted film or staged shot. THE BEST! I feel fortunate to have been able to view the results of your patience and diligence. Wildlife forever.