Tips for Starting Out in Pet Photography

Pets are considered by most as family members. Some prefer cats, others prefer dogs, and some even are drawn to the the flying kind of lovable companions. While most think of only photographing their beloved fur babies as a hobby, have you ever thought about turning it into a marketable portion of your company?

A few fellow photographers gave their tips on the best practices for photographing animals in the studio and on the move for this article. Getting them to pose for a portrait is not an easy task. They do not truly understand what you are trying to accomplish. Ashlea Lisefsk, out of Orlando, Florida, says that the most important part of pet photography is patience. Getting low and onto their level will help you be "in their world." With some animals, you can find out their magic words, such as "treat," "walk," or "ride." These can help to grab their attention (however, you better have a treat)! Lisefsk also suggests trying to get their ears up, as it is a sign of happiness. Having a dog's ears back will show fear or aggression, which is something you do not want to portray in your portraits.

Each animal is different, so find out what makes them the happiest. Some are motivated by treats and others by sound. But remember that these tricks will only work a handful of times before they are over it. She uses calls, such as duck, squirrel, quail, rabbit, as well as a kazoo, dog squeaker and anything that might contain a great whistle sound.

Lisefsk is not just photographing pets as a hobby, but making it her specialty in her business. She is a full-time photographer of pets. "No people unless a furry one is with them," she joked. She decided to re-brand and start over in this genre some time ago. She was not sure it would work out at first, but now, she is busier than when she was photographing people. She started out by buying a vendor booth at every pet event she could find. Since then, she now partners with other pet businesses to create portrait events for their clients. She found that was key to getting her name out there faster. She also loves to partner as much as she can with rescues to get them adopted.

Jeff Dachowski from New Hampshire writes that "fear or confusion in the session usually equals poor results in the imagery." Having an assistant or even two can be necessary for portraits with pets. He wrote that while squeaky toys work for some, it can trigger a chase response in others. "Always ask before you squeeze that rubber hamburger! When working in a park, I am always on the lookout for other random dogs who might come charging into a scene," he writes.

He makes sure to always speak to the client and get a behavior history of their animal. While he is not worried about being bitten, he just wants to know if the animals have a fear of being petted, picked up, trust issues, or any food allergies. Some rescues have very different backgrounds, and they want you to respect their limitations.

Dachowski writes that if you are attempting action shots, use a high shutter speed and a strobe if possible. "The strobe can help stop action, but high-speed sync will further improve your chances," he explained. Before shooting starts, it can be helpful to watch the animal run a bit to gauge their motions, speed, and directional change. If he is shooting inside the studio, they set up the lights prior and allow the animal to roam free to explore. This helps them adjust to their surroundings, but having the assistant on hand will help them stay on the chair or in the space intended for shooting.

"Loving on the animal and giving them a treat, if allowed, can help establish that the studio is a safe place," wrote Dachowski. He also just completed a charity book to support his local animal rescue league.

Sarah Teveldal is an underwater photographer out of Texas. Her advice if you are attempting to dip below the surface is to have patience, but also be prepared to catch a paw to the face. "The majority of the work I’ve done with dogs has been in partnership and as a fundraiser with Austin Pets Alive, our local nonprofit shelter," she wrote. Not all dogs can swim or enjoy the water, even though their owners think they can. Be careful with this when attempting to have an underwater session with dogs. They are not props, but living creatures, so make sure the animals you are photographing are enjoying their time in the water.

Her favorite session was for a dog with cancer who was obsessed with the water: "It was his best day ever, according to his owner, and he passed shortly after," she wrote.

As an underwater photographer myself for mermaids and boudoir clients, I decided to attempt a session last summer. Seeing the incredible imagery in Underwater Dogs by Seth Casteel, it was going to be fun to try something out with my dog, Charlie. One thing I found was that even though Charlie is a water dog and will jump into the lake, for hours, he does not like putting his face underwater.

Pet photography can be an amazing addition to your company if you intend to make it a specialty. It can also be the perfect fit for you to volunteer at the local shelters to give portraits to help these guys get adopted. Many shelters have had more success getting adoptions from portraits that show the character of the animal rather than a cellphone picture of them scared in the back of the cage. If you have the talent, it is a great way to help find homes for as many as we can.

Lead image with permission and courtesy of Ashlea Lisefski

This how powered me up a bit, because I'm getting my new dog this coming Tuesday!

One of my very first shots from yesterday as we just took him out for a quick walk and I only got to snap off a few shots. We went out today, but Tokyo was soooo cold and windy we beat a hasty retreat back home. Hopefully I'll get another chance next week outside with him. I even did some shots with him at home tonight practising with my flash but they were all (&%#. Will be trying that again soon, but need to get some type of background worked out for it. 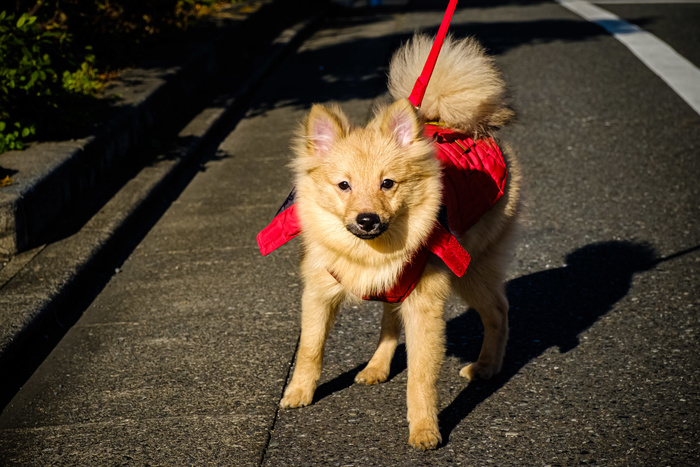 Love that little face! He will be a great model for some pet portraits!