Behind the Scenes on the Set of Metallica's 'Hardwired' Music Video

Here’s a really cool behind-the-scenes look at the set of Metallica’s "Hardwired" music video. This is the first single from their new album “Hardwired To Self Destruct” slated for a November 18 release. Let’s take a look at this video from a cinematography point of view. I think this video is a great example of how you can create an effective music video out of a seemingly simple set. This music video features no B-roll, just great footage of the band hammering it out.

To start things off, this video was filmed in a high school gymnasium in San Rafael. The set begins with black cloth being hung all around the gym walls, ultimately creating a darker and more moody set. They blacked out the floor as well. After that a circular dolly track was then placed around the drum kit creating a stable platform for cinematic camera movement, e.g., the opening scene where James Hetfield starts playing the intro guitar riff. 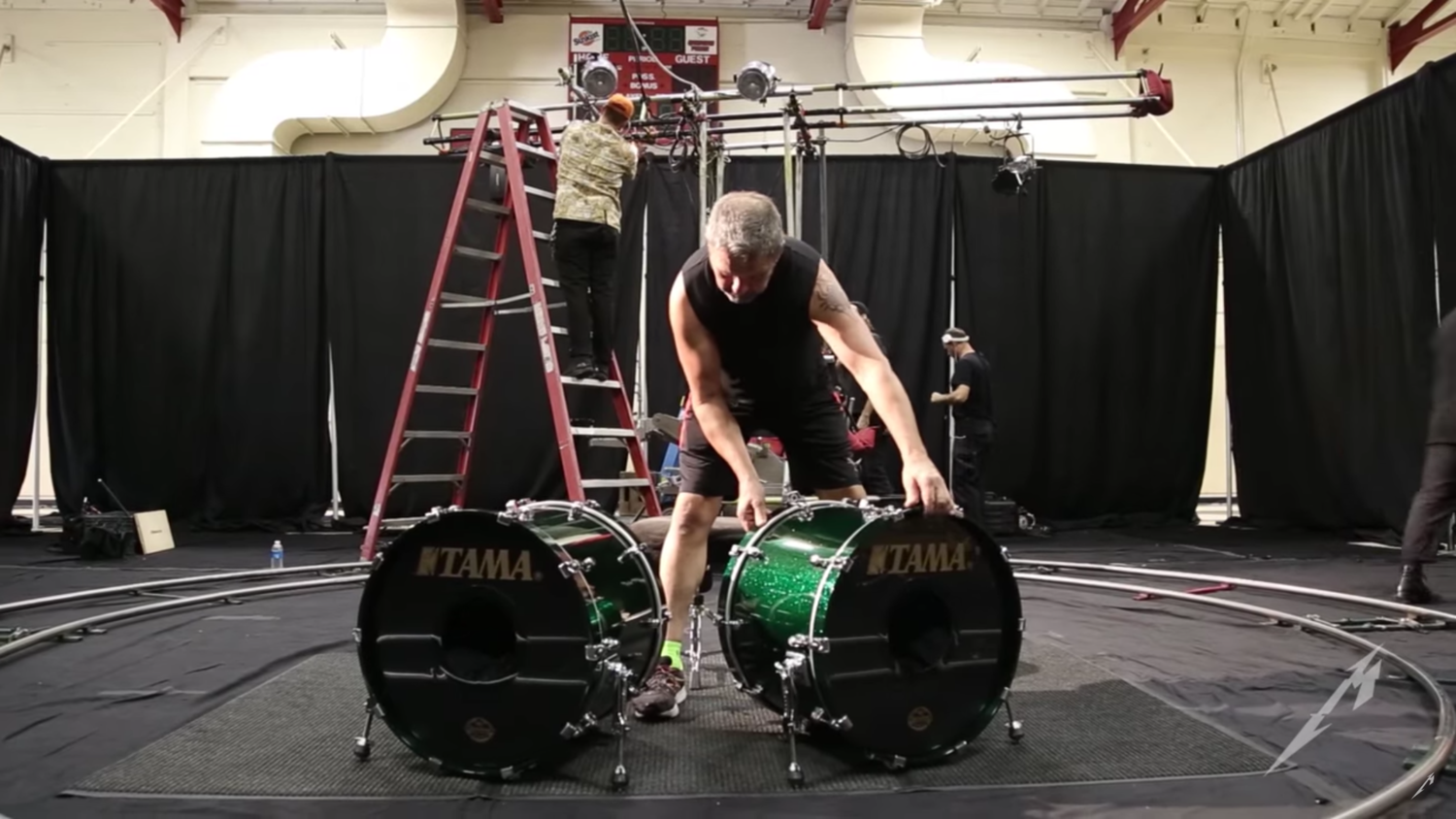 The lighting is very simple as well. Several strobes are placed around the band at ground level pointing upward towards the band. This is a classic lighting approach used in old horror films (Side note: Kirk Hammett is a huge collector of old horror film memorabilia). This lighting scenario was probably very deliberate. Some strobes are flashing consistently while others are simply moving around illuminating parts of the instruments and faces of the band. The lighting used in this music video is very reminiscent of the music video from the band's 1991 hit “Enter Sandman.” Also note the black and white grading, similar to the official music video for “The Unforgiven.” 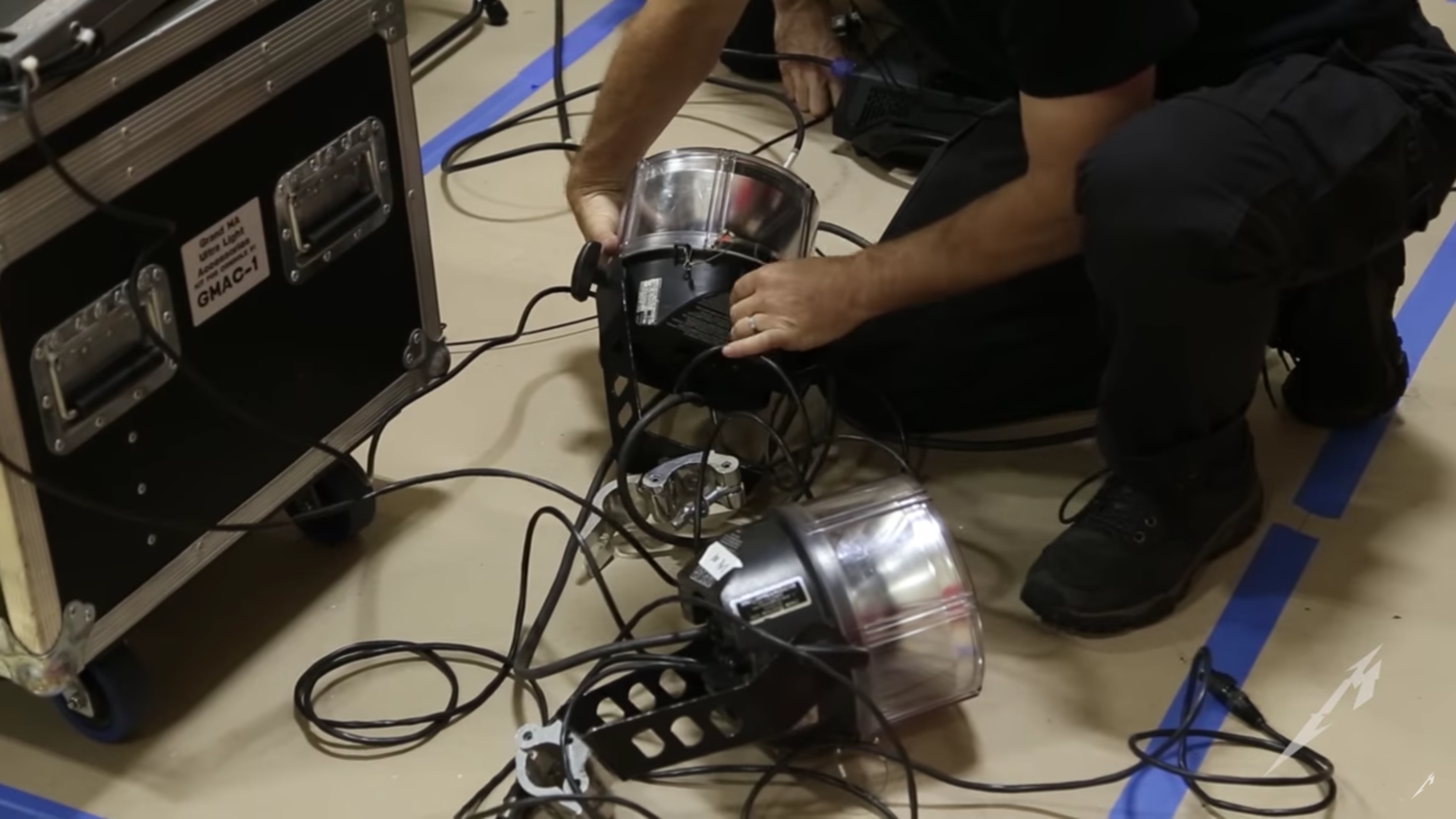 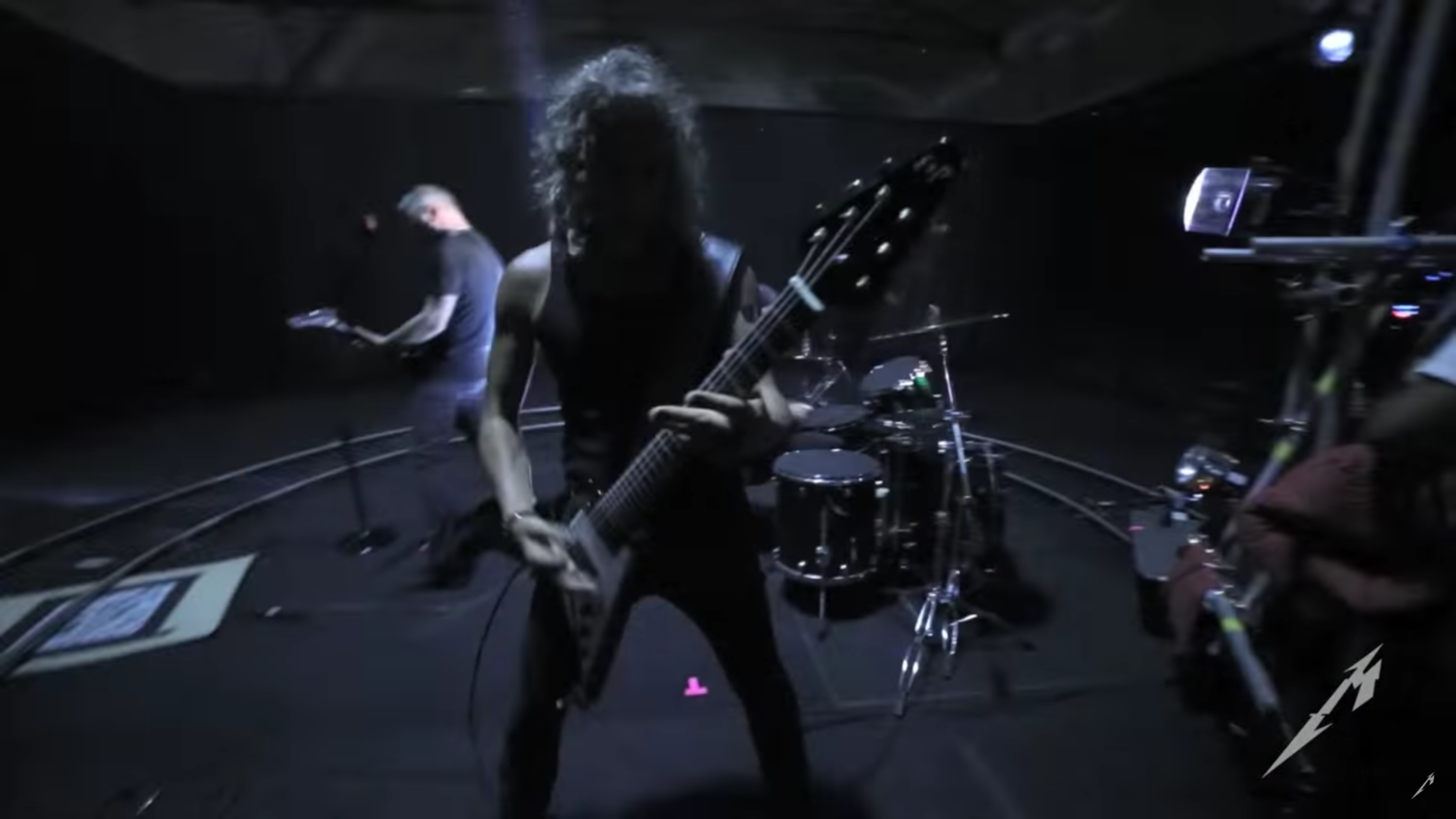 The production crew were using some high-end ARRI cameras on the set of this production. While some cameras seem to be utilizing the dolly for steady cinematic movement, others look to be utilizing handheld DSLR, jittery, fly on the wall camera movements that compliment the dynamics of the fast-paced thrash metal. It also appears that they are shooting at a wide open aperture allowing for a shallow depth of field in some shots, thus adding another layer of depth to the dark set. 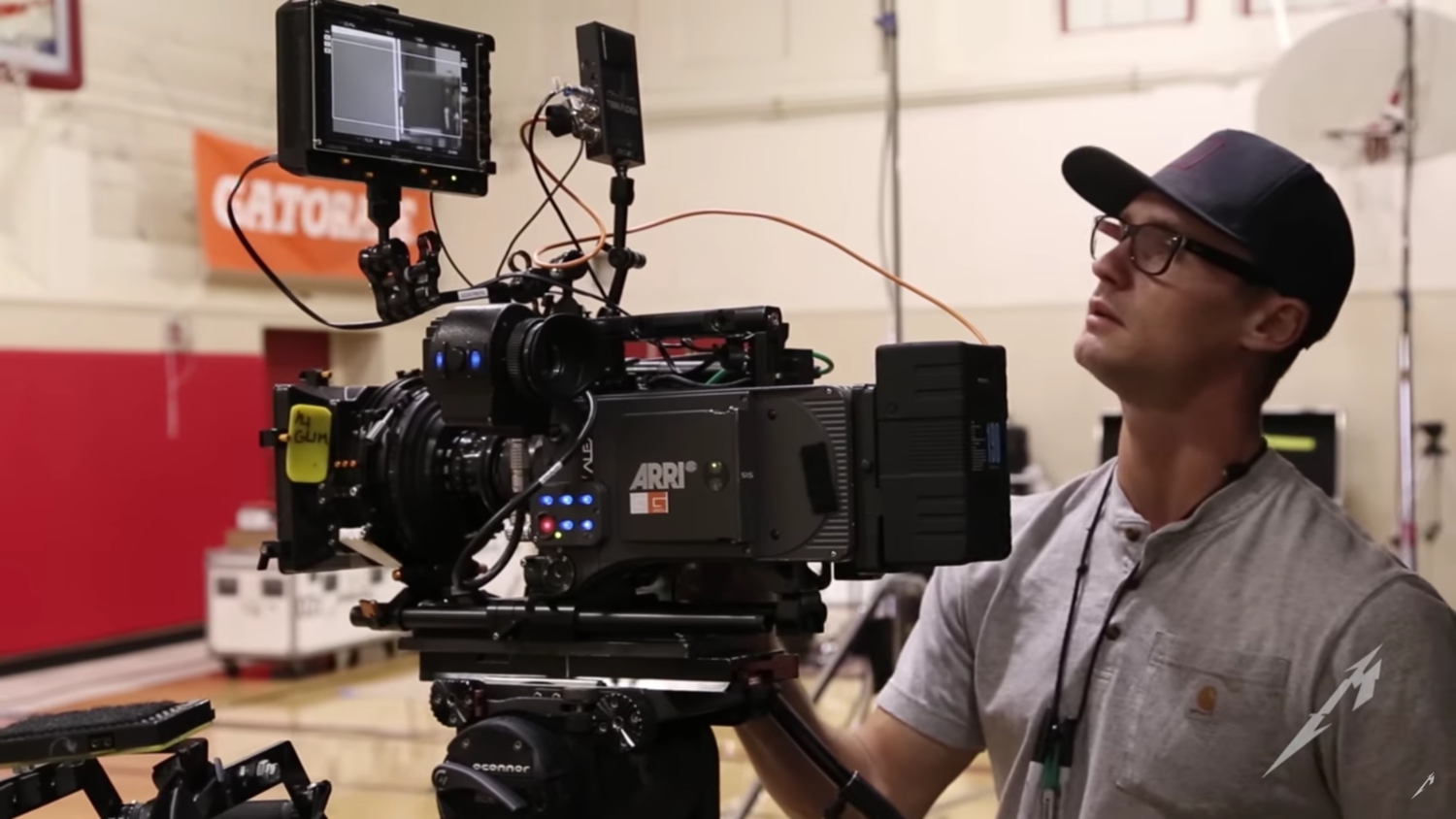 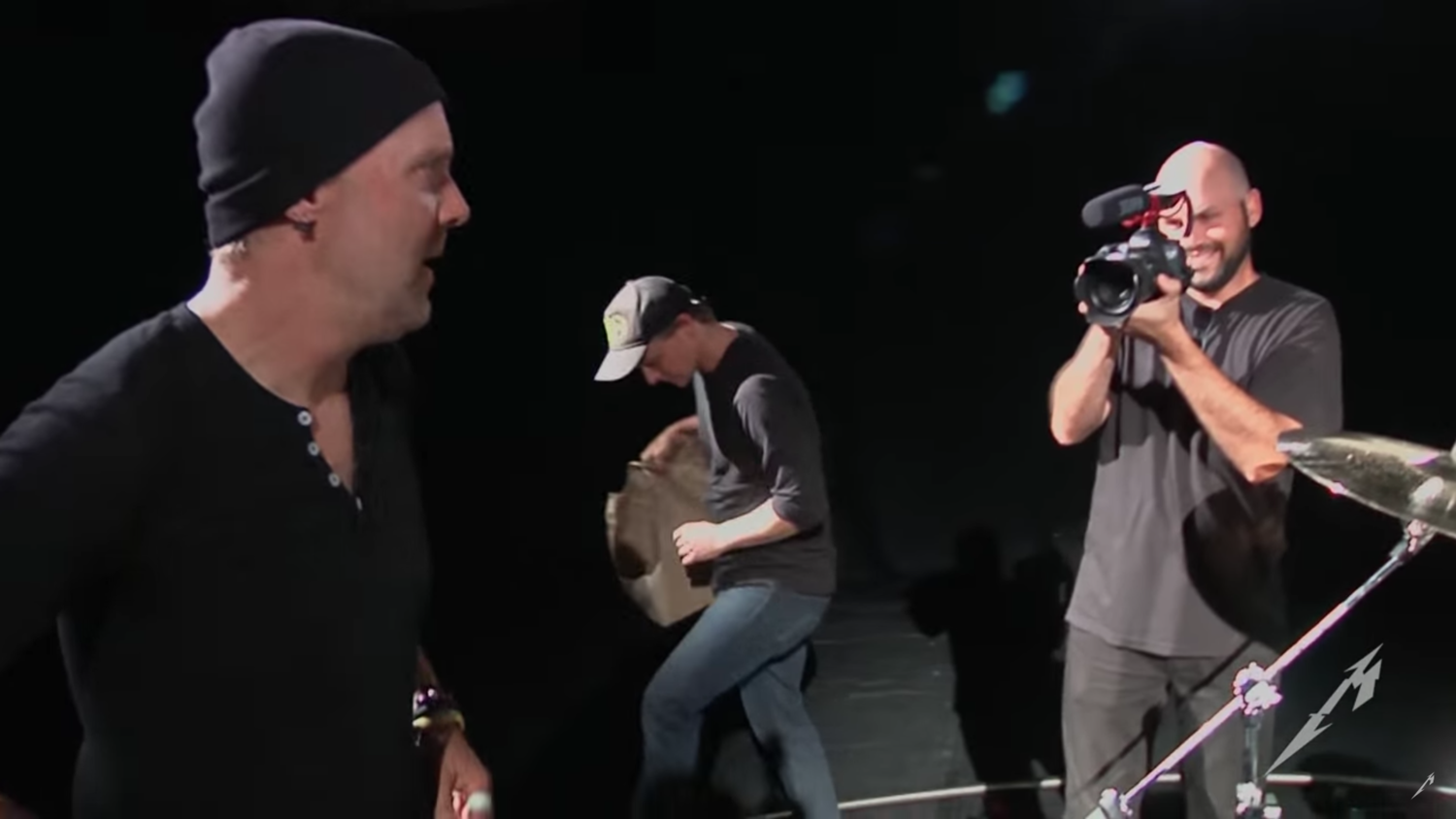 The stage crew added some kind of special effect dust particles which can be seen floating in the air when the strobes are backlighting them. This is a simple idea that adds some really cool atmospheric elements to the shots. In terms of special effects, that’s probably about it. This video is raw and in your face, using simple yet effective camera techniques.

And Justice For All

Hopefully this behind-the-scenes video will give you some inspiration to look at video production in a new way and potentially create your own music videos. Though this crew is using some high-end production equipment, you could create a video similar to this by using your current DSLR’s HD or 4K video capabilities, alongside some basic production equipment such as a Steadicam to circle your subjects. Set up in a completely dark room and utilize some simple lighting approaches and techniques. I think you’d be amazed at what you could create with some simple tools. Another important point to make is that this style of video really complimented the music, context is everything. 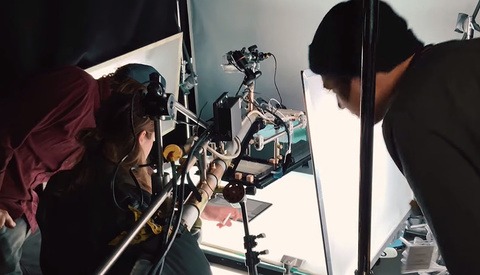 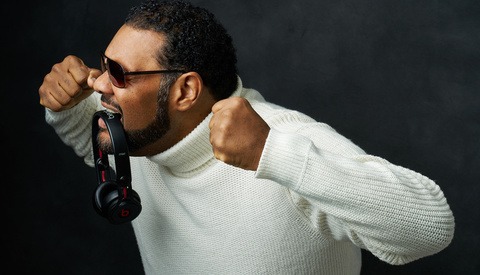 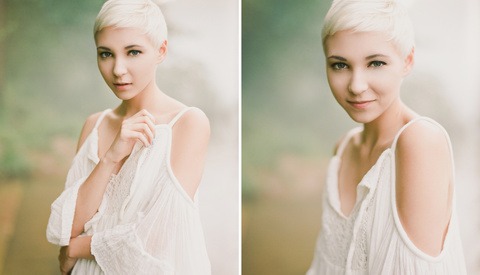 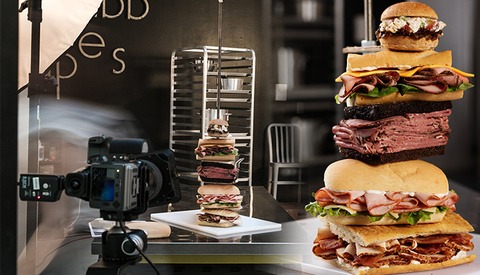 Commercial / November 21, 2013
How To Build A Tower Of Sandwiches | BTS RGG Photo 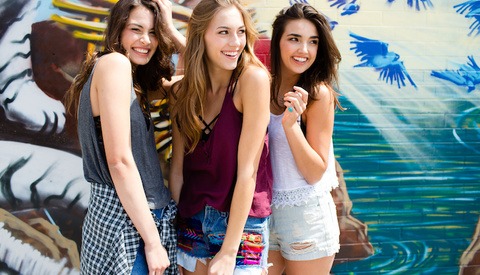 BTS / December 10, 2014
Getting The Most Out Of Your Modifiers
Log in or register to post comments
14 Comments

I try not to be a "hater" but I really don't like that music video... it felt way too low budget for Metalica but maybe that was the point. I must be getting old because I also didn't like Corey's performance either https://www.youtube.com/watch?v=gyWV-bL9-oc

I thought the Metallica video was pretty awesome. The video fit the song very well, simple and in your face. Plus it reminded me of some of their older stuff which was pretty great. Ha, the Corey thing...just LOL. I hadn't seen this man. I'm not sure what to think honestly

Totally agree. This could have been made with a strobe light and a merry-go-round for about $3.50.

I kinda of agree but I think they ended up doing something simple because they put out 2 different music videos within a month and it looks like they were both shot in the same gym. The 2nd one they put out has more production value and a better song I think.

Who da fak is Corey Feldman anyway?
The Metallica music video is awesome! It feels "real". Who cares how much did it cost?
KISS principle! ;)

Hardwired is a nod to their first album, Kill Em All. The video ties in with that idea. They must have been looking at old grainy b&w images from that early era. When the concept is right the budget is irrelevant.

Whoa. Like a frenetic mash of Blair Witch Trial found-footage.

I did a similar video for my friends rock band, since I did it as a favor and was paid by a sandwich, I only used 2 DSLR's and a few $10 strobes. Everything was handheld.LOL https://www.youtube.com/watch?v=cPq4unkZeb4

Not sure if you got the link correct - looks like you linked to a bunch of war footage clips instead...

Your friends are pretty good too! Nice work

Anytime Metallica is mentioned, I immediately refer back to Bob Cesca's Metallica vs Napster cartoons...

I really liked that video for "Hard Wired”. It is raw edited crazy like the song. Simple but effective. BUT ... the video for “Moth into the Flame” … now THAT is a shitty video. No energy whatsoever, no surprises, no dynamics, just boring.

Man.....I like, reaaaaaally didn't like this. Everything was so tight cropped, and it was so spazzy. I don't know, it really just didn't do it for me.