It's been a while since we've released an Fstoppers original video, so today we want to take you behind the scenes with Mike Kelley. If you've been following Fstoppers then you know he's been a writer with us for a while and is also one of the most talented architectural photographers in the country. Mike's workflow and style is truly incredible and the amount of hours he spends on creating just one image is - as cheesy as it sounds - a work of art.

Back in July, Lee Patrick and I had the pleasure of spending an entire month with Mike to produce his upcoming DVD tutorial which will be released by the end of this year (so be sure to put it on your Christmas list!). After WPPI 2013, we headed to Scottsdale, Arizona to film Mike "doin' his thing." It's crazy to think he used to be a professional snowboarder turned professional photographer. We spent two days filming and talking about his process. While he shot and put together multiple images for this client, Mike calls the most important image of a shoot the "twilight image." If you're an architectural photographer or looking to get started, this is the one image that you must know how to master. 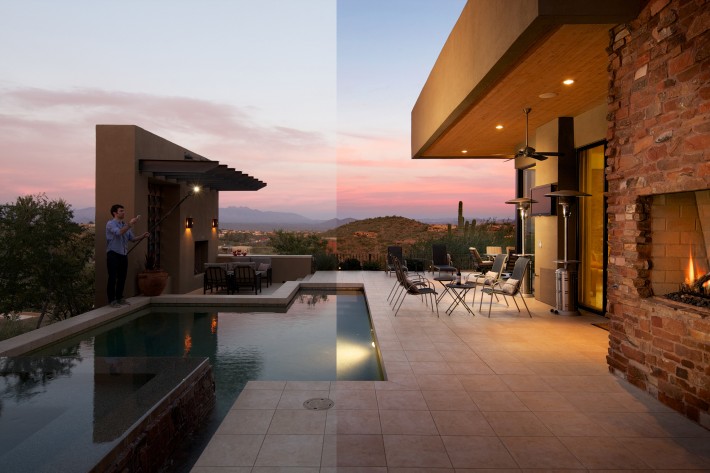 As Mike will tell you, a lot of architectural photography is moving furniture and waiting until you have that perfect 5 minute window. Once he's got everything ready to go, he'll take a speedlight on a monopod and go around and flash several different details of the exterior. Once he's finished, all of those images get put into one image and we're going to show you how he does it. If this original and the DVD isn't enough, or you just want to meet Mike and see how charming he is in person, then head over to our Fstoppers workshop website and sign up to learn from him hands-on in the Bahamas in May 2014. Mike has also put together a complete gear guide of every single thing he uses to create his amazing images.

OOOOO Can't wait for the DVD! I hope it's not 1000 bucks. =) Love Mikes work, very inspirational.

For you? $999. Kidding, we plan on $300 like our other two. The exciting thing for me about this product is that its so specific and nobody is doing it so you could take the technique, book just one job and pay for it on the first day. Every other genre of photography is so saturated right now but there are only a handful of photogs in the world that can do work like this.

Ouch! What about for us loyal fans who don't troll and have purchased other products from you guys in the past? WINK WINK! I smell a hell of a coupon code in my inbox straight from Lee! =)

As always we will take care of those who have purchased from us in the past by giving you guys a coupon code and access to purchase the product before anyone else :)

Gah, I wish I had the talent and patience of Mike...

I just found 2 days ago an Artike about Mikes work on the http://strobist.blogspot.com/2011/09/mike-kelley-two-speedlight.html awsome work.

Thanks for sharing, Phily! Fun to look back at that article. Still the same technique, but very refined now.

Brilliant tutorial! Thanks so much Mike and fstoppers!

Thanks Shannon! You're welcome.

Great video! Informative, well paced, and a great example. Mike, you're a pro on camera and behind it!

What an amazing amount of work that goes into his photos, but the results are spectacular!

Congrats to Lauren for filming and editing her first Fs original completely by herself.

She did a great job!

I've clicked on the link to the video but just get an error message.

It's great to see an artist putting real light into use to help accentuate architectural nuances, at a time when many others settle for the HDR treatment. Mike, out of curiosity, how long would you say does it take you to style, frame, light, and edit a shot like this? Thanks again for sharing your insight. I'm sure you've heard this before, but the results are top-notch.

Hi Michael, thanks for the kind words! This shot sorta worked like this:

What I'm curious about is, what your fee is per hero view? I'm guessing not all potential clients have the budget for all this production. I appreciate your amount of effort for the final image though! I used to do interiors with layers masks and RAW smart objects, either with house only lighting, or also supplementing with Arri fresnels. But the clients don't seem to want to pay for all the work involved, so I had to evolve. Maybe I need to find higher paying clients, or expect less.

Depends on the job, really. It's rare that I'm shooting JUST a hero shot without some sort of other work going on that day or location. The right clients are out there, it's just a matter of referrals and finding the people who are after this kind of work.

you could probably get all the same detail out of a single D800 file rather than that 1Dx or 1Ds3. just D&amp;B the highlights in.

That's what is unique about Mike's process....he is adding light that is not there in the scene. You can't create his type of images with HDR, dodge and burn, or bracketed compositing alone....it simply won't work. We are about to release a full multi hour tutorial showcasing Mike's entire workflow so you will be able to see just how different an image looks that has been "HDR'd" vs "Mike Kelley'd"

i'm not talking about HDR; i'm talking about D&amp;B. I'm pretty sure I could get it looking very close, if not identical. You just need a file that can hold up to D&amp;B without showing artifacts.

A lot of what Mike does requires directional light which would obviously be impossible with just dodging and burning but I'd love to see someone attempt this genre of shooting all in post. I'm sure you could still create a killer shot if you are patient enough.

Light is a much more powerful tool than many give it credit for. Think of it this way - sure, you can dodge and burn a model's face, but would you want to shoot a portrait in flat lighting and just dodge and burn everything in post to make it look good? Wouldn't you prefer to add some rim lighting, play with modifiers, different ratios? Light adds so much!

Is this final image intended as architectural for a magazine, or as a promo pic for a high end home sale? If It's intended for a magazine - it's brilliant. If it's intended as an advertising image, then I have some minor issues with the adding of false flames into a gas fireplace and cloning out the other building.

I believe this was taken for an architect so it just shows what the builder is capable of building. That's why removing the house in the background isn't a big deal because it doesn't affect the craftsmanship of the builder. However, if this were a real estate image for listing agent then yes, it might be unethical to remove things that are infact in that view.