I have always had a passion for cars, which is what set me in the path of becoming a photographer. From casually taking photos of various cars with a point-and-shoot at local events in the beginning, I decided to go beyond that and see where I could go with a camera. Scouring the Internet to learn as much as possible, there have been a group of automotive photographers that stand out to me amongst the best, and Easton Chang is among them.

If you are into automotive photography, I am sure you have heard of or seen some of the work by professional commercial photographer Easton Chang, which I would consider to be one of the best in the industry. I have always wanted to pick his brain to see what his thought processes are during photoshoots, how he executes the shots, and the methods behind his retouching. This isn’t something you can usually do from behind your computer screen, until now. RGG EDU has partnered with Chang to produce a new set of tutorials covering his different approaches and methods during his shoots as well as finalizing the photos with his retouching workflow.

When the tutorials were first announced, I was thrilled about the release and was looking towards watching the videos. As soon I received the email with the links to download the tutorial series, I couldn’t wait to start watching them. It did take some time to download the complete collection, but that’s expected since the series is over 21 hours of HD videos and other files. Starting off the series is the introduction with Chang, which I usually do not watch, as I like to get straight to the point of things. But for this tutorial series I decided to watch it. Instantly I realized this was going to be a great series and was inspired to go out and shoot after listening to him, and this was just the beginning. 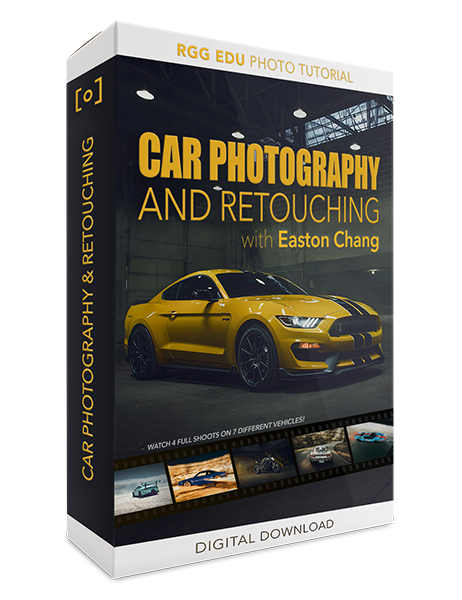 Chang starts off the series with an introduction and by sharing his ethos over car photography while also sharing some tips and knowledge. Looking for that secret formula to jump ahead? Well, there isn’t one. If you are curious about his camera gear, he shares this with us as well, but emphasizes it’s not only about camera gear and settings. It goes much deeper than this. Great gear helps, but Chang started his career path with very basic gear as well.

Jumping into the El Mirage Dry Lake Bed in California, we begin our journey with Chang to cover his philosophy of static and motion shots throughout the day. He covers various approaches to capturing movement and showing the sense of speed in his work while getting a lot of effects in-camera. There’s no need to pick Chang's brain during the shoots, as he is constantly letting us know his thought process and ideas throughout the shoot. There was even one point at which I was thinking I would do it this way instead if I was shooting, and moments later Chang changed his mind mid-shoot and proceeded to do it that way. Planning is great, but sometimes the moment can change as well as your direction of the shoot. It’s amazing to listen to Chang throughout the photoshoot and know what he his thinking, and especially to have the reasoning behind it all.

The next section covers light painting, which Chang considers the most fundamentally important aspect in car photography. I tend to agree with his opinion that light painting does give the vehicles “pop” in photos, and it is a popular method in the industry. There are several methods of light painting, and Chang does an excellent job of showing us his process through each of them using strobe lighting as well as different sources for constant lighting, including the modeling light, a light stick, and a fire rope.

The final section of the tutorial series covers the rig shot. If you are unfamiliar with what a rig shot is, it’s a method of attaching the camera to a subject to enable a longer exposure. In this case, a set of poles, or “boom,” and suction cups attached to the car for a longer exposure to capture the motion. Andrew Thompson from Rig-Pro joins Chang to help set up and share best practices and tips while using the rig setup. The car’s speed is very, very slow in this method, which I think it a lot safer than some other methods, but still yields an image that gives a sense of high speeds.

At the end of each section, included are several videos covering step-by-step instructions on Chang's process, including culling the images and raw processing, to finalizing with basic and advanced retouching methods. Chang thoroughly explains his thought process and the reasons behind each adjustment, as well as showing a few variations to achieve similar results. Sorry, there isn't a simple plugin or preset for a quick "Easton Chang" look. He does keep a fairly simple workflow, but it changes as he goes with his creative process for the image.

I have already mentioned this, but one of the things I really like about this series is the fact that Easton explains the complete process and his thoughts during it all. He doesn’t just tell you how to create the shot and leaves it at that. He goes beyond and lets you know his thoughts and reasoning behind it all. You are not left with questions on why he used a particular method, or why he did something one way versus another. If there was a change, he lets you know if it was his creative choice or whatever other reason the change happened.

One of the things I didn’t like was part of Easton’s workflow. Everyone can do it differently, but as far as educating others, I believe he should of stick with a non-destructive path while merging multiple images together. The reason I would go this route would be in case you erased too much of the image on one layer, you can always bring it back with a few more brush strokes if he used a mask instead of erasing. Yes, you could use history or undo, but what if you moved on during your editing and decided later you wanted to change it? There has been multiple times where one might change directions of the image mid-shoot or mid-editing, Easton himself even showed some of it during the series. Instead of having to bring in the original image to start over, you could easily brush back the part if you went too far. We all have bad habits in our workflow, this might just be one for Easton in my opinion.

During the retouching segment for “Light Painting Image 3,” the image used wasn't shown how it was created. I understand that the previous videos of light painting methods could have been applied to make this image, but I feel like it should've been shown for this image since it was being used in the series. Some more novice photographers could have questions on that particular shot, yet there’s video showing what was done for that image.

The last thing I didn’t like is a double edge sword. The videos are quite long and you have to spend some serious time watching the videos. I appreciated it, but I know some may not due to being impatient. The good thing is you can pause, stop, and replay whenever you like.

In either case of a beginner or more experienced automotive photographer, I believe there is a lot of useful information in this series that anyone can learn from. Chang does an excellent job of explaining each process so anyone can follow along no matter what skill level they are at. One section alone is well worth it, let alone the complete series with the additional extras. I plan to watch the series over again for a few reasons, making sure I can absorb much of the knowledge that is shared and just to get more inspiration from Chang. I can’t wait to get out and shoot more and see what I can apply from Chang to enhance my skill set while still having my own style to it, which is what he believes in as well. While you could learn his style and copy it, this series is aimed more at sharing his philosophies and different approaches throughout the entire workflow to enhance our own. Each of us will have different creative styling to finalizing the images.

You can purchase the complete "Car Photography and Retouching with Easton Chang" series from RGG EDU’s website for the price of $299. This includes all the videos, raw files, lens flare pack, and the coupon to order your own complete Rig-Pro rig kit.

I consider myself an Automotive | Portrait | Wedding Photographer
I pretty much agree with everything you wrote! I was somewhat disturbed at the lack of masking and erasing on the images (The yellow GT350 light painted on in particular). Although we all have our different methods, this seemed like a silly one to omit, oh well.

But overall Easton was amazing at explaining his workflow and editing techniques!

I was quite socked at the erasing part honestly, yes everyone has different methods but I think in this case as an educator he should of used mask. The end result is still great and it works for him, but for others I suggest using mask.