Behind the Scenes at Vanity Fair's Game of Thrones Photo Shoot

I'm going to be honest with you right off the bat. As far as behind the scenes videos go, this one leaves a lot to be desired. However, as always there is still some information to be gained from it. The first and most important being that this entire series appears to be lit with one Profoto Acute2-D4 head nestled snugly in a Softlighter. Naturally with this being a Leibovitz shoot there is a solid bit of post production and that is surprisingly where the lesson lies here.

Here is the final cover image: 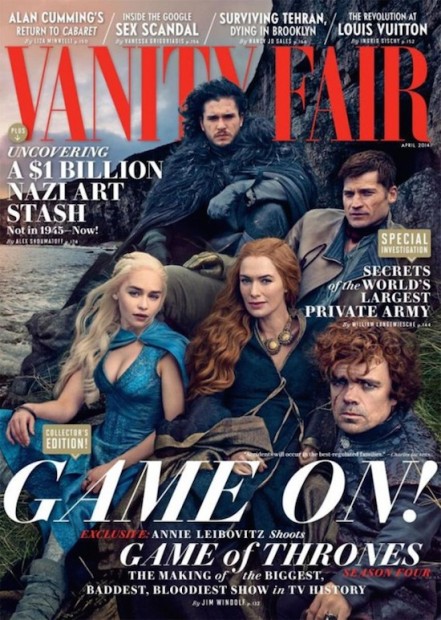 Maybe you're not a fan of the books, and maybe you've never seen the HBO series so you might not catch the glaring error here. I'll explain...

See that red-headed actress right in the middle of the shot? Well, if you notice in the video above, she's blonde. Not blonde like her colleague in blue, but still blonde. She's blonde in the books, blonde in the show, blonde in the behind the scenes video...yet inexplicably different on this cover. As a matter of fact, the only character on this entire cover whose hair is NOT supposed to be blonde is the actor in the back. Why?

We can only really chalk this up to an intentional retouching effort. Which means that someone on the team had no idea how to make them look.

Rant over, let me get to my point. The first lesson here is to always do your research when you are assigned to a job that involves preexisting characters. It may not have been Leibovitz's fault directly but she is the one in charge of the final product.

Im glad you mentioned that first statement lol. that was the first thing I expected lol

I think she has more or less the same hair color than the actor on the right, and on the final product they have the same too. Not a big deal.

The thing that surprised me most of all was the second shooter sporting a PocketWizard as well.
I mean, come on. How much of the final image is hers in the end? To me Annie has been in an ever-increasing decline since 2005-2006. I wouldn't be surprised if she sent her second shooters on small assignments working for 'The Leibovitz Studio'.
Hiring a photographer is all about his or her vision, not one of your assistants'.

I know she's burdened with work but start refusing clients then. This is becoming ridiculous.

Ever since retouching became more than 50% of the final image her quality has deteriorated. Who can even remember one of her iconic images since 2005-2006 unless it's for a photoshop disaster?
It's like she doesnt put any soul into it anymore, and she's just the Walmart of photography. She doesn't do anything passionately creative anymore. At this point, I think the retoucher's name should be credited for the photo.

She's one of the few big photographers who have not been faring well with the switch to digital. She should have remained analog...

With Editorial cover shoots like this it's often the art director from the magazine calling the shots than the actual photographer, even if it is Annie L.

The AD calls the shots as to what he wants to see in the magazine, the photographer calls the shot as to how she gets what the AD wants to see. Lately with Annie's work (and I do follow it quite accurately) I feel like she just shoots whatever, however, even handing cameras to assistants and then she dumps them all over to Pascal at Box and expects he'll pull bits and pieces from everywhere to create a overly photoshopped photograph. She has no vision aymore and the result (as you can see) is often an overprocessed, incoherent mess.
Simplicity and budgetary contraints forced her (and a lot of us) to be more creative and result in more interesting images a lot of the time.
Her work on a simple camera with a simple setup and without overly exagerated postprocessing budgets in the 90's is simply put infinitely better than anything she produces now...

I've said it before and I'll say it again, I think she lost her eye and her crew is now more talented.

I don't think it's as much that she has become spoiled, lazy and overworked. Give her normal rates that don't afford the luxury of 11(!) assistants and over-the-top post processing, give her less assignments and she could go back to producing quality work. She's now basically the walmart of celebrity photography.

Geeeez so many Annie haters already. She's still rocking it today. What BIG advantage she has over other new digital photographers prestige, name recognition, and the clout of knowledge from the film days. Yes there may be more breath-taking photographers out there for possibly half the price, but to knock on Annie is to belittle the entire photography business. One of us! One of us!

Oh come now....hardly one of us! The fact that she presses a shutter release does NOT mean we are all the same. And to have a criticism of her portfolio or current commercial work is to "belittle the entire photography industry"!!!!! Are you drunk or stoned?????
Seriously?

wow, first I watched video, and than relized its Annie. I mean it would be ok for averege photographer who shoots for averege magazine. But the work I have seen by Annie, doesnt match these pictures. Wong would make this excelent with half of that crew.