BTS: The Intriguing Process of Creating a Conceptual Image

When getting started on a conceptual image, it can be hard to figure out where to even begin. For conceptual photographer Thomas Brown’s new image entitled “Tunnel Vision,” it all began with an idea from his imagination and a rough sketch on notebook paper. Check out this cool behind-the-scenes video showing how his concept was creatively shot and developed into the final image.

Using only a couple props, a PVC pipe and a small toy action figure, Brown set up the stage in a studio. The lighting on the tunnel and action figure used only a single softbox facing toward the camera and into the pipe. Shooting with a Pentax 645Z and the FA 45–85mm f/4.5 lens, the shallow depth of field required Brown to shoot a number of images with gradual focal length changes so that he could focus stack in post-processing and have everything sharp and detailed.

After getting the base shot completed, Brown threw on the Pentax DA 25mm f/4 lens and had a friend model for him with different poses holding different objects. Even though his original rough outline showed a person holding suitcases in each hand, ideas are always evolving. Always be willing to let your creative side take over and try new things in the moment if it feels right. In the end, Brown was able to refine his original idea by having a person leaning on a guitar case versus holding suitcases, yet he stayed true to the overall concept. 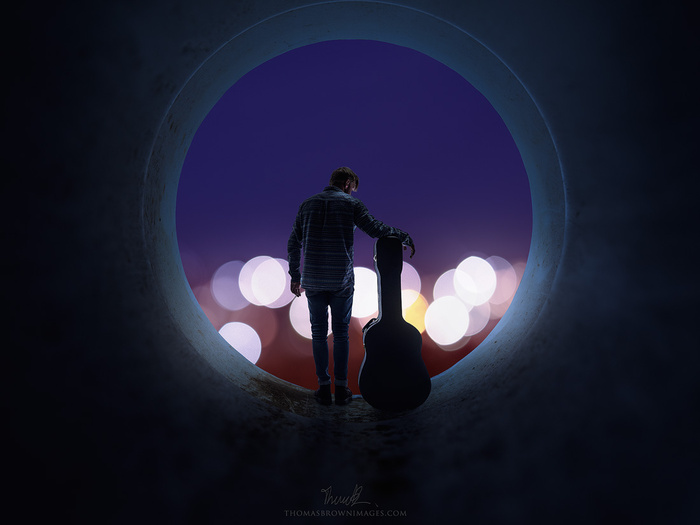 Interested in seeing more work from Thomas Brown? Check out his Fstoppers Portfolio to see his other images, or you can also visit his website, Facebook page, and Instagram. Be sure to leave a comment below if you're a fan of his images or want to ask him any questions on the process.

Thank you, Ryan. There's a very special satisfaction in the interative journey from pre-visualization to completion. I admire Thomas's disciplined patience, step by step toward his finished piece.

Here's an example of pre-visualization on my end... in this case with an illustration.

why use the toy? if not using it?

Hey Charles, he used it to focus or maybe he changed his mind.