Almost all of us have caught GAS (Gear Acquisition Syndrome) at some point. We can often get caught up with buying new lights and modifiers, new lenses, and it can all become rather daunting, so recently as a challenge to myself I shot an entire portfolio building session with a single light, a single modifier, and a single lens.

One of the ways that I keep myself shooting and, therefore, improving, is to shoot model tests. Model tests are when you collaborate with a modeling agency in order to build out both your book and the model's book so it is a symbiotic relationship. When I shoot model tests I always attempt to try and challenge myself in some way, be it a new lighting setup I've never done before, try out a new technique, or in the case of today's article inspiration, try to stick to just one lens and light.

The gear I used for this shoot was not my standard gear. I decided that if I was going to restrict myself to one lens and light, I would also shoot on film for an extra restriction. I used the Mamiya RZ67 which is my go-to film camera. As for film stock, I used Portra 400 (Rated at 320), and my lens was the 110mm f/2.8. For my light I used a single Cactus RF60X and a deep parabolic softbox. For some shots, I also used a 5 in 1 reflector either on the black side or the shiny side. 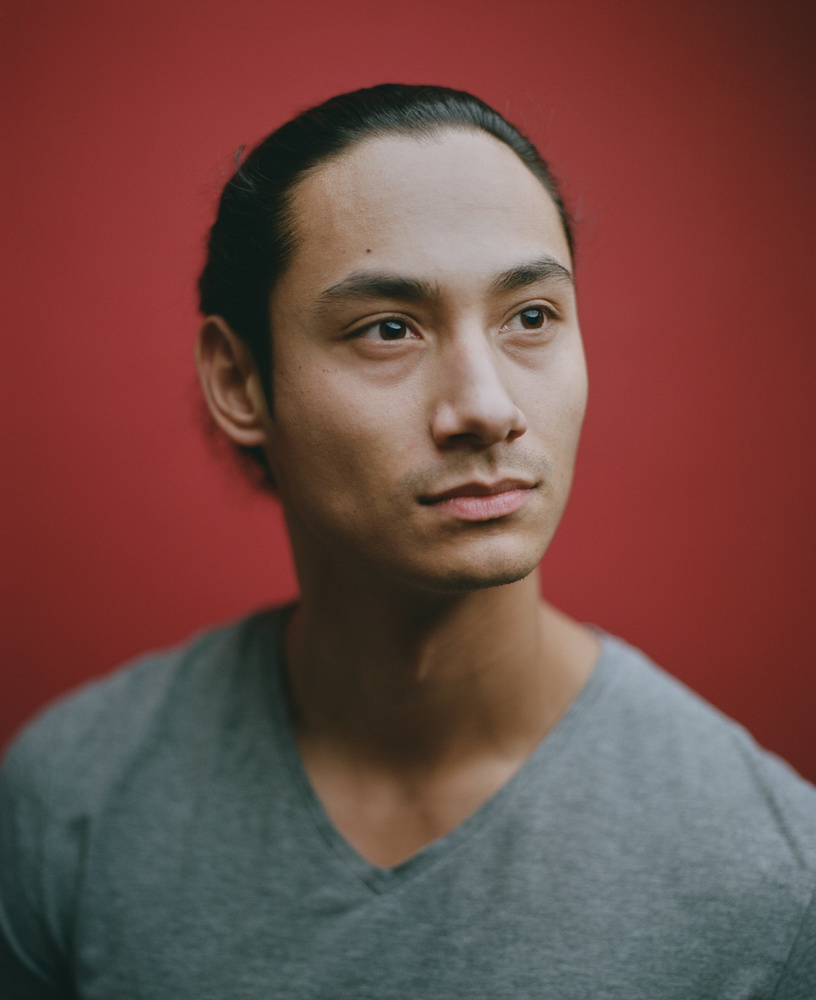 My first setup of the day was also probably the most complicated, which isn't really saying much as it's still pretty simple. The reason I say it is complicated is because when lighting from above it can be difficult to get that sparkle in the eye without the subject looking straight up. It can take some adjusting in order to get the light above your subject, at 45 degrees, and still getting that sparkle in the eye that I love so much. But that's all I did, I set the light above my subject at 45 degrees with a bounce to fill in some shadows so the headshot isn't too punchy and just moved the light around little by little until I got the sparkle in the eye. One downside to the RZ67 is that I ony have the waist level viewfinder so in order to get focus I had to raise my tripod up high and stand on a chair to look down and focus. 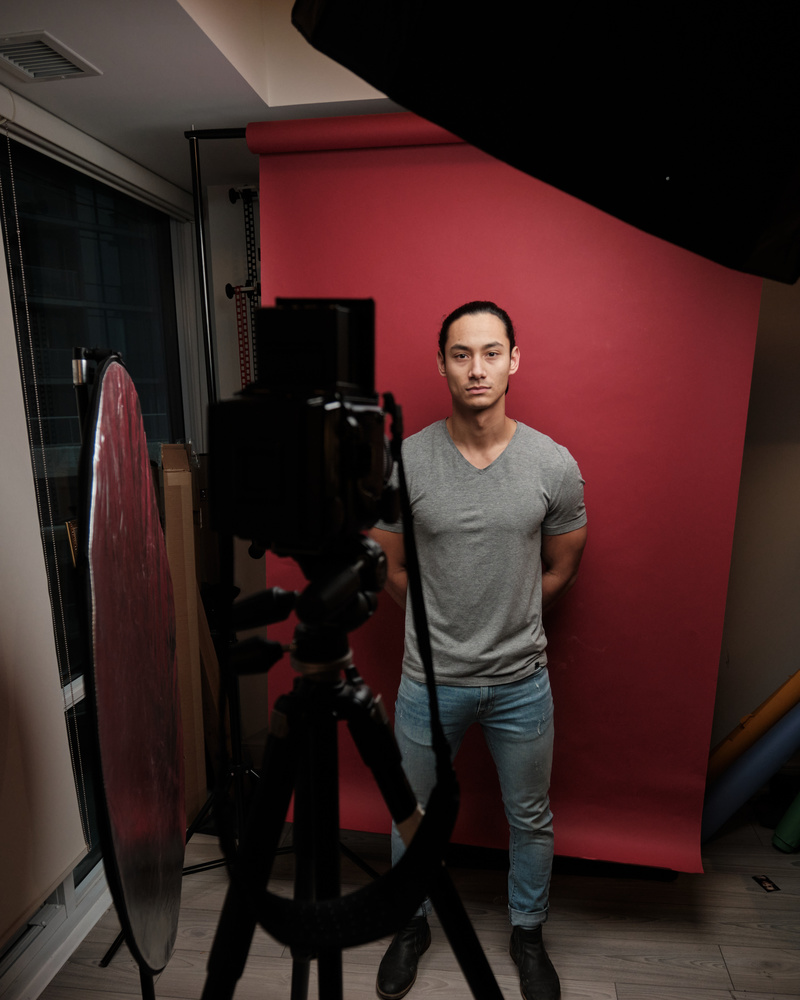 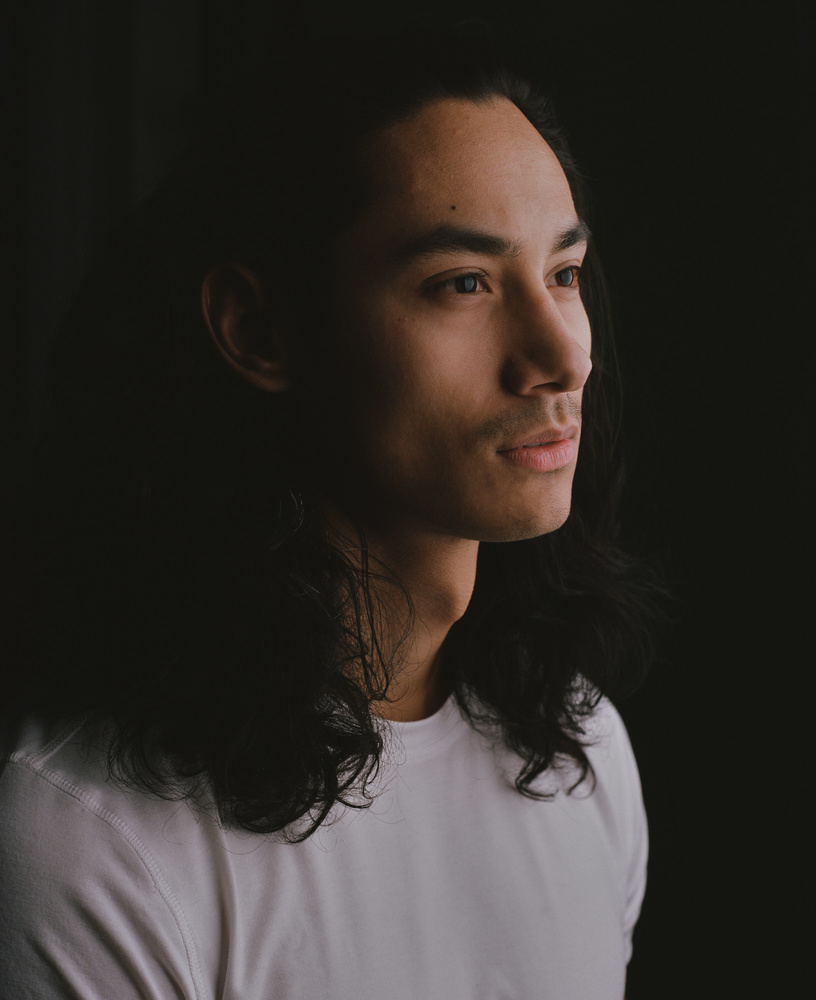 The second setup takes advantage of the inverse square law to get a nice black background and high contrast in my small home studio. A great crash course on why this works is in this video from Peter Hurley who explains it far better than I ever could. But, essentially, by putting my light directly in front of my subject, the light will fall off of my subject extremely quickly allowing me to totally black out the background even with limited space. In order to ensure that everything was as black as could be, I flipped my 5 in 1 to the black side to act as negative fill and really help me increase my contrast even more resulting in a punchy, invisible-black shot with just my subject visible. The lack of shadow-detail in film really helped this as well. 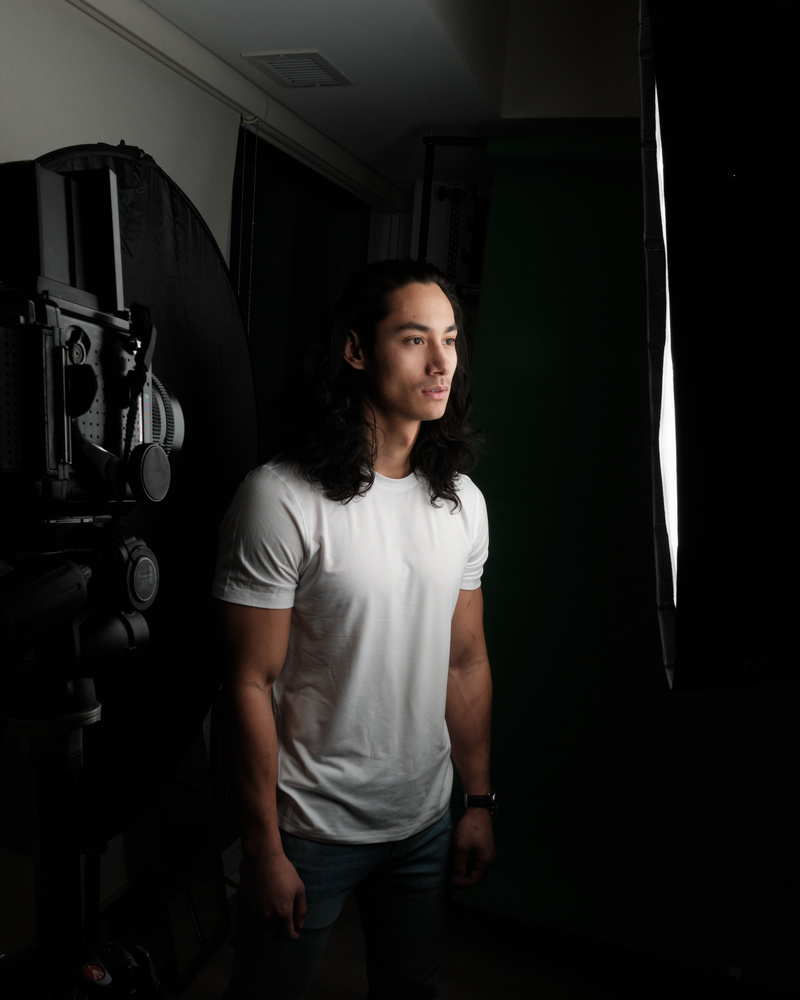 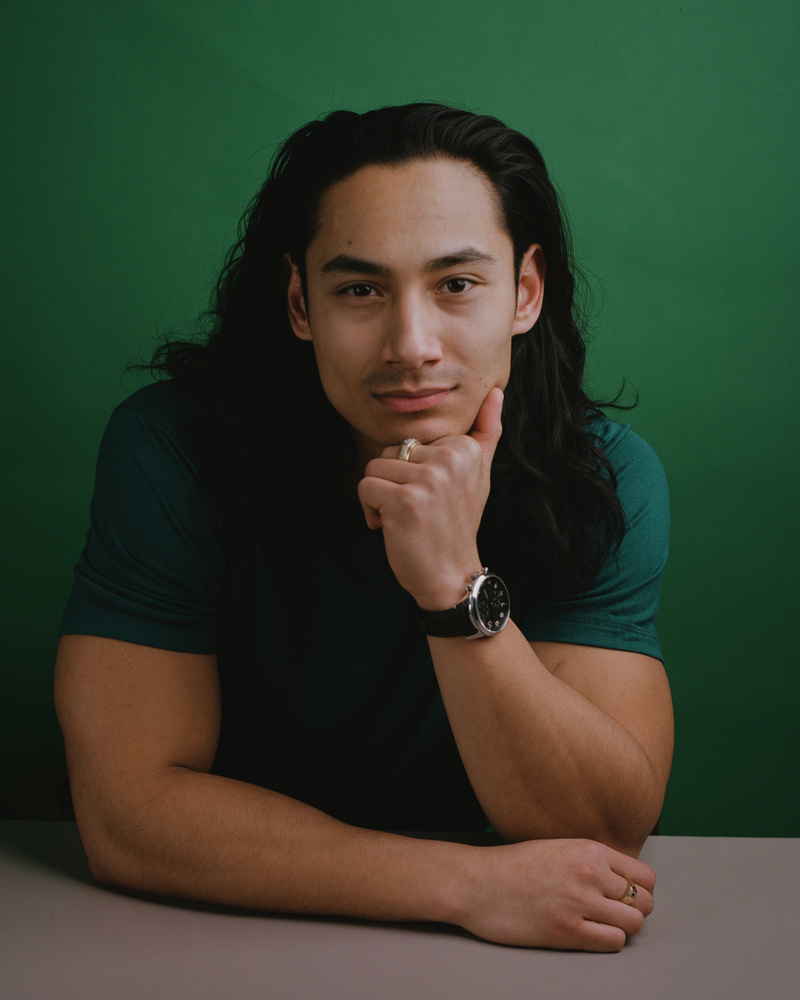 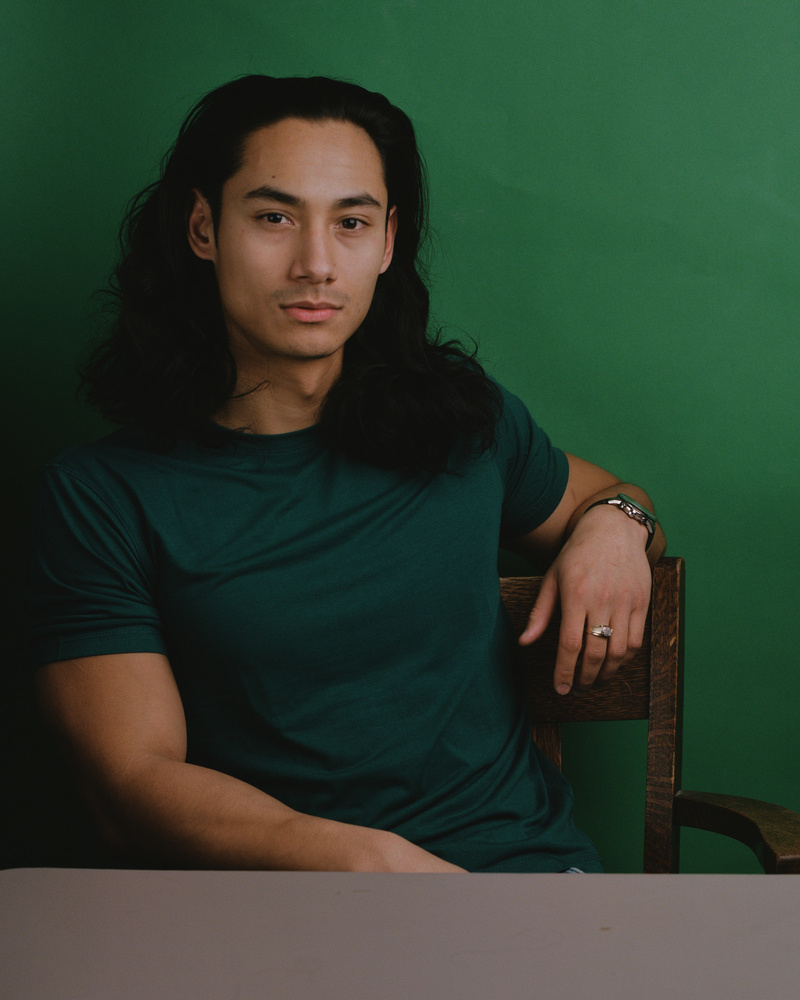 This third setup is becoming one of my go-tos. I set up my light at a forty five degree angle to get a sort of Rembrandt sort of lighting, and then add a bounce to fill in the shadows. By putting a small collapsible table down, it allows the model extra opportunities for posing, letting them lean forward onto the table, lean back on the chair, fold their hands etc. I also really like how the table divides the frame. As you can see, I also swapped out the red paper for green paper just for some variety on this shot. 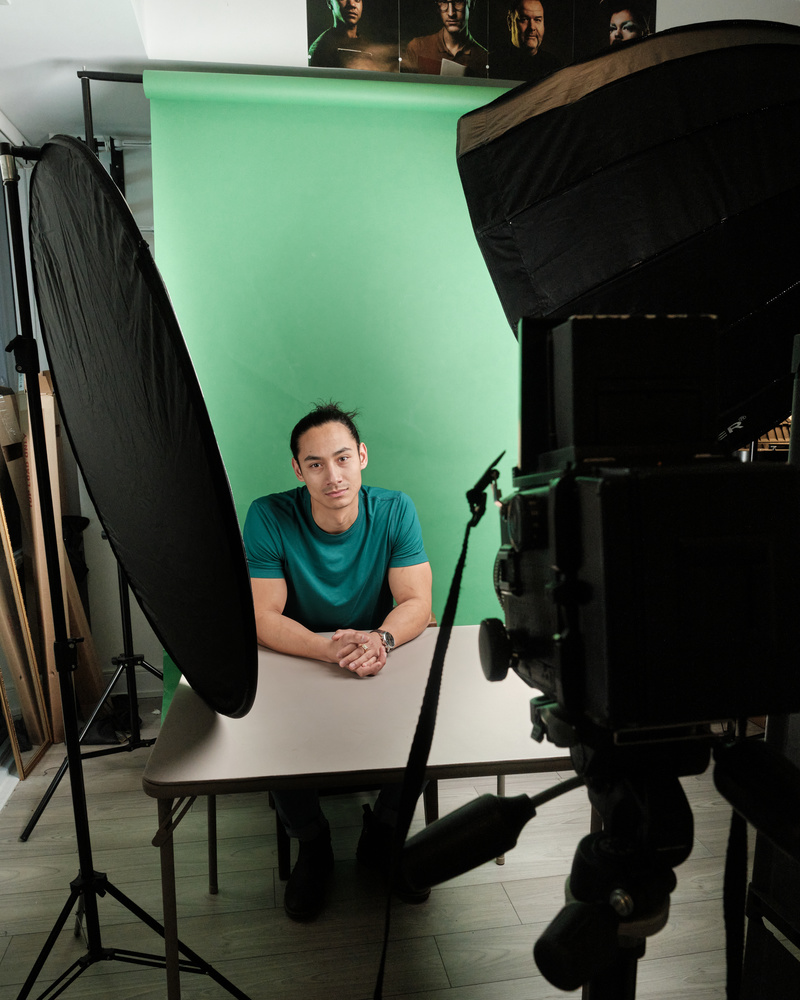 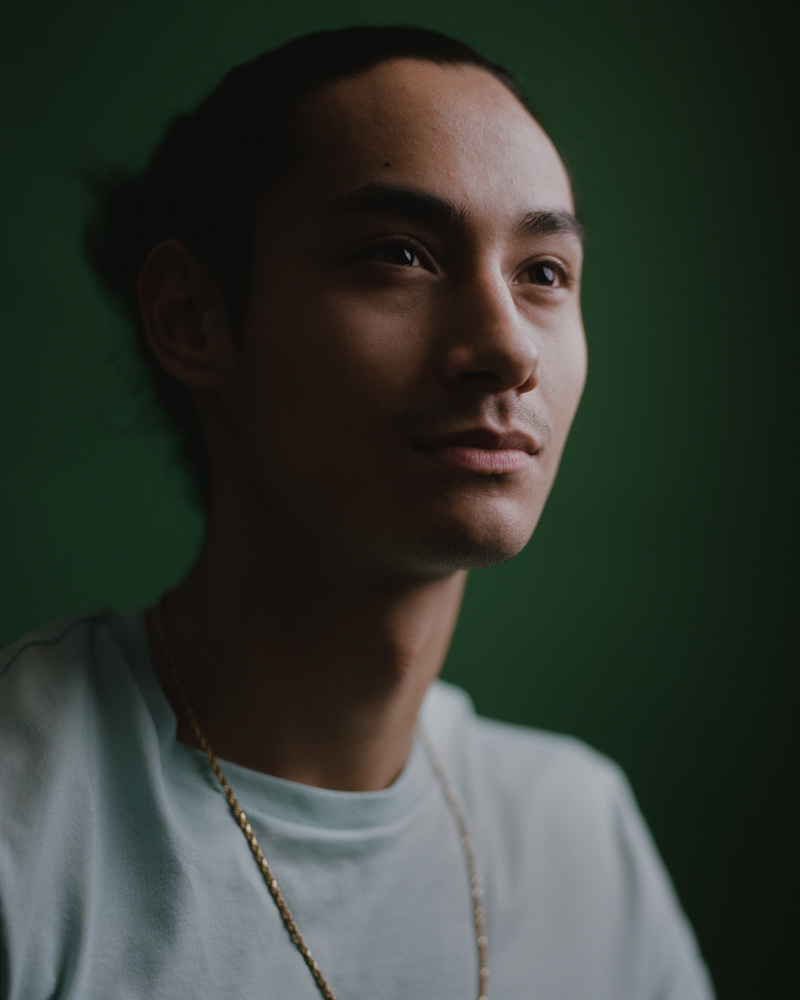 Setup #4 is very similar to Setup #3 except that instead of using a bounce, I turned my 5 in 1 reflector to the black side, acting as negative fill and moved my model, Aaron, closer to the camera and adjusted the light so it was still pointed at him, resulting in a punchy, contrasty look. I love photographing with light on the short side of my subject and I can't explain why. I just feel that, for me, it makes my images more unique and I adore the way it looks. Sometimes things are just personal taste without actual logical reasoning and this is one of those cases.

I forgot to get a BTS shot of this one but it's very very similar to Setup #3, just the subject is moved closer to the camera in order to get the light slightly behind them, and I turned my modifier so it was still pointed at him. 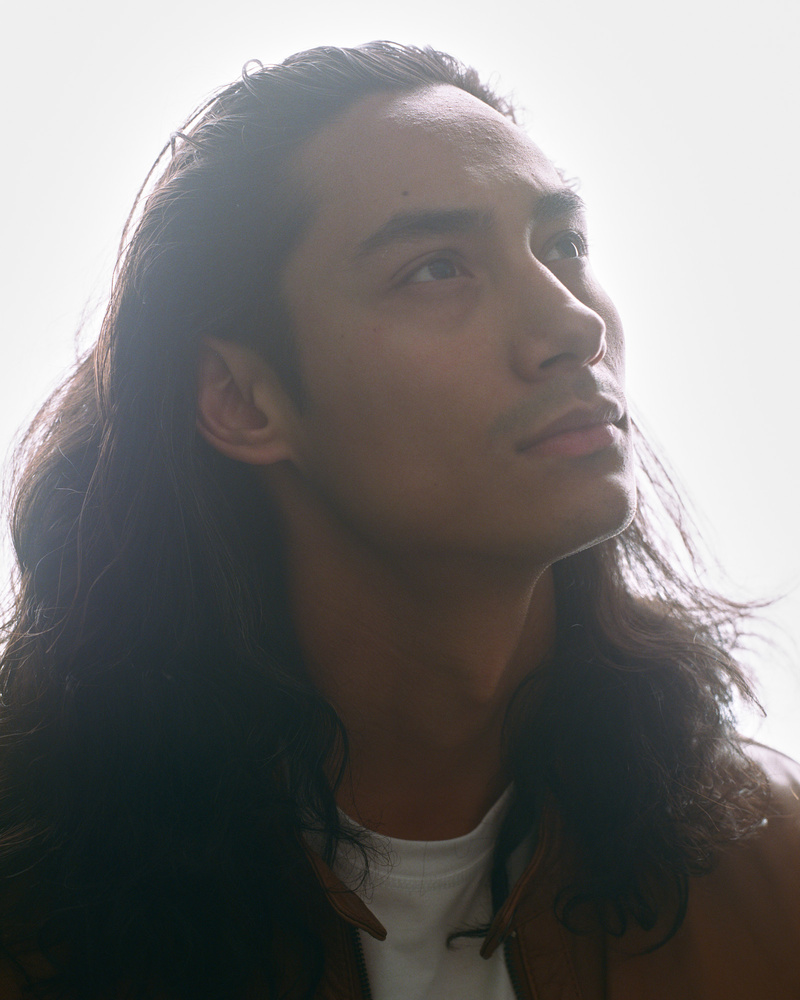 This last setup is one of my go-to setups and, sadly, lenses like the 110mm f/2.8 have a hard time suppressing flare so this isn't the strongest example of this lighting setup, however It is also the easiest setup. All you have to do for this lighting is place your softbox behind your subject and a bounce behind yourself. This will create beautiful soft light behind your model that wraps around them and really accentuates their shape — especially if your model has a great jawline or cheekbones. While the bounce isn't totally needed it really helps fill in some of the shadows when you don't have a lot of latitude, say you're shooting on an older camera, or film which has less shadow detail. 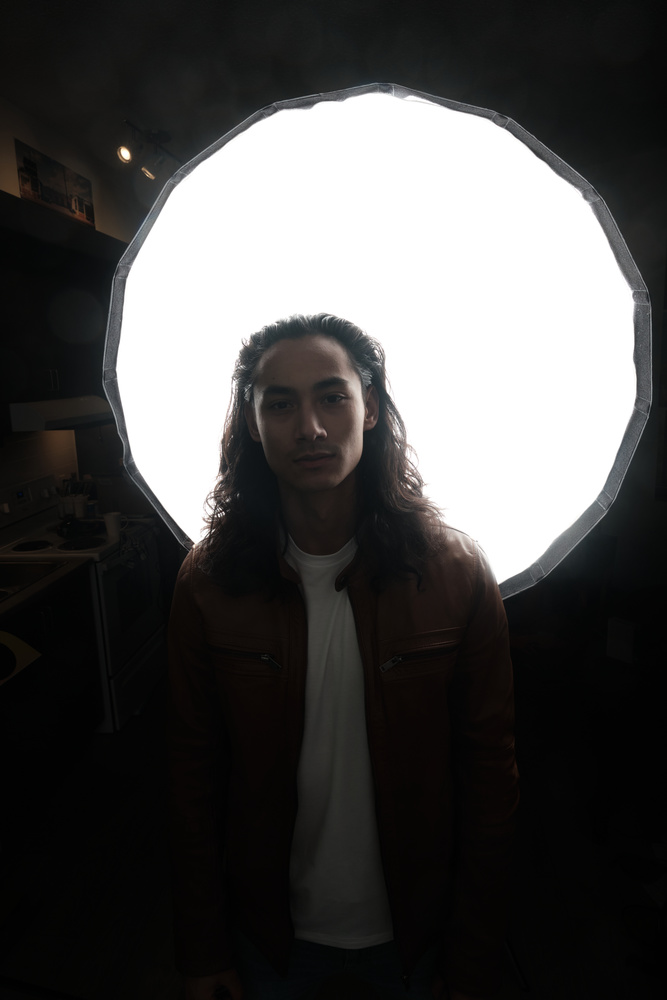 As you can see, with just a single light there are near countless different setups you can achieve just by making small adjustments to where the light is, as well as using a bounce to fill in shadows, or negative fill to enhance them. Have you ever purposefully restricted yourself in order to be more creative? I'd love to hear stories down below!

Education / January 29, 2019
How to Prevent Lens Flare in Your Landscape Photography

Education / November 13, 2018
Give the Lens Flare in Your Landscape Photo the Finger

Great article. One of those why I rather read than watch a video: I read a paragraph, take a look at the picture, read it again and memorize it. And the portraits I do like as well. Thanks.