Photographer Giordano Cipriani has filed a copyright infringement lawsuit against Kendrick Lamar for the use of his image without permission. The image in question was used as artwork for the single “The Blacker the Berry.”

The image in question is of twins breastfeeding from their mother, which Cipriani shot in 2011 while visiting Africa. He claims the image is being used without his permission. Per the lawsuit, Cipriani is seeking damages upwards of $150,000 for each use of the image in addition to legal fees. I have covered artists ripping off photos and posting them to Instagram before – e.g., Diddy, Ludacris, and of course Snoop Dogg who lifted fellow writer Mike Kelley’s "Wake Turbulence" shot without attribution or link. However, this time it was used in a commercial manner – which in terms of damages, is much more expensive of a breach.

"The Blacker the Berry" cover art

I can’t comprehend how Lamar and other artists who have such a substantial reach think that it’s okay or worse, no one will notice that the image was used without permission. I honestly hope that the damages are awarded, as this type of behavior needs to stop. You can see the original image on Giordano’s website (NSFW).

Lamar has not responded to the allegations as of yet.

And this is why you don't use google image search for photos to use on albums. Although it might seem harmless, images found on google might end up being from somebody's portfolio. I don't know if K.Dot did that, but it is possible. *shrug*

I know I just did a search for "African Mom Breastfeeding Twins" and that image came up and linked to babble.com, and not that guys website. So it could've been harmless on his part, but his producers and/or graphic designers should've done a lot more research on that image before using it.

"I am a sinner who's probably gonna sin again." - Kendrick Lamar

Would it not come down to the record label as opposed to the artist?

It looks like the lawsuit is directed at everyone. 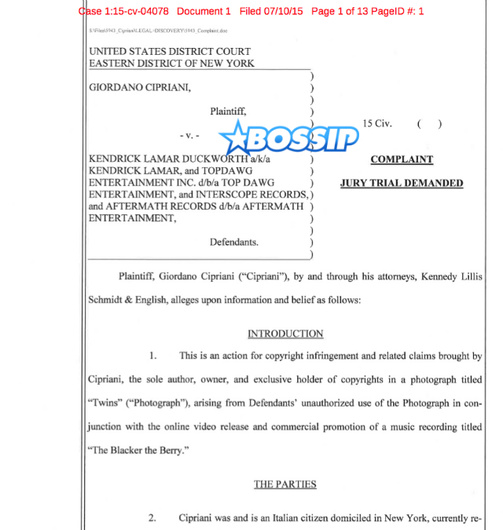 A law teacher I had once told me, always sue everyone involved.

Let them prove it's someone else's fault instead of assuming it's not theirs....

"I can’t comprehend how Lamar and other artists who have such a substantial reach think that it’s okay or worse, no one will notice that the image was used without permission."

"I can't comprehend how Lamar's legal team and label let this single go to production with an unauthorized image."

I'd actually agree with both statements. It's always shocking to me that musical artists will steal photography without a second thought. Given their legal battles to stop people from pirating music, you'd think they'd have more respect. Since they don't apparently have respect for the photographer's work (or worse, think they are doing the photographer a favor by using their image), their legal team should have done their homework.

Well, looks like I'll be getting his music from bit torrent from now on.

Taylor Swift told him it was OK.

I am not defending this guy as photo theft is wrong but I highly doubt he was the one who personally picked out the photo to use. More than likely he had someone working for him find some photos to potentially use. If he did pick the photo himself, his team really dropped the ball in making sure it was legal to use before they used it. Now they will end up shelling out some major cabbage for something that should not have happened in the first place.

i'm gonna bet that they did pay someone to use that image. not the right person it looks like but no way a record company legal dept would just wing it. they should pay up, i doubt it will be for that much though. in this internet age, this is so common and will never stop, just like movies or music being downloaded. never gonna stop. hope he gets paid for this and not just those thieving lawyers.

As copyright litigators we have sued/claimed against numerous musicians, rappers and hip hop artists (and related publications and record labels) many, many times.

Among our many cases, we have two copyright cases pending against rapper Rick Ross and related defendants in Federal Court in New York, which have been covered by TMZ, among others..

TMZ pointed out the irony of Ross being sued by our client/photographer for copyright infringement at the very same time Ross is suing others claiming they infringed upon his copyrighted music.

Why anyone should be surprised that artists including photographers and illustrators regularly engage in copyright infringement is frankly, beyond me.

I hope Giordano wins and shares some of that money with the mom and the kids on the picture!! :D