If you haven't seen or heard of it. The now Oscar-winning film “Free Solo” documents professional climber Alex Honnold as he climbs the near 3,000-foot face of El Capitan without the use of ropes and safety equipment. Filmed and produced by the same team of Vasarhelyi and Chin who previously made the award-winning documentary “Meru” which captured Chin and his team's first ascent of Meru peak in the Himalayas.

Fstoppers has several great articles covering “Free Solo” and the many dangers and moral responsibilities the filmmakers faced. However, if you're interested in learning more about what when into making the film check out writer Brian Pernicone's interview with Chin: “The Razor-Thin Line Between Triumph and Death.” It's an amazing read that really gets deep into the details and emotions of what it takes to document an achievement like this.

It's amazing to watch as Chin's photography career has evolved ever higher. Getting to attend some of his lectures and hear about how he got his start and the different paths he has taken along the way is some of the most inspiring talks I have attended. As an adventure photographer and a climber myself, his work has always been on my radar but I think just about any photographer and cinematographer can learn and be inspired by Chin's journey. I can not wait to see just what his team will produce next. 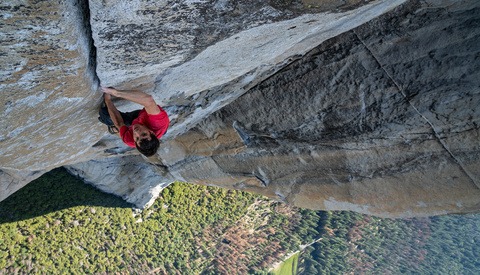 A well deserved win! One of the only films I watched in theaters in 2018. As the filmmakers have said in many interviews, it's a character study more than it's a climbing film. I highly recommend it to anyone with even a passing interest in climbing or outdoors sports.

It was striking to me how even the last 5 years of technology made the cinematography in this film. Comparing Free Solo to the 60 Minutes special on Honnold's half dome climb is a massive step up. Admittedly there was likely a budget difference there as well. But putting drones and lightweight but high quality 4K capable cameras in Chin and Vasarhelyi's toolkit paid off massively.