Here we are on day five of our 30 for 30 where we are releasing 30 videos to the Fstoppers YouTube Channel the entire month of January. Yesterday Charleston, South Carolina was hit with the biggest snowstorm in over 25 years. I decided to team up with my crazy friend Bryan Young and take ski portraits around town. The resulting images are pretty hilarious and are definitely once in a lifetime photographs.

The day started with a lot of rain and sleet. I honestly was not sure it was even going to snow but the forecast showed that Charleston, SC would be receiving near record-breaking levels of snow. Since I am the only one from the Fstoppers team who lives downtown near the studio, I was faced with having to create this video alone. I had no ideas, no concept, and most importantly no one to even photograph. Luckily one of the craziest guys I know lives a few streets down so I gave him a call.

The concept quickly turned from "let's ski down the Ravenel bridge" (which was blocked off by cops, otherwise we would have done it) to "let's go skiing downtown." If you've ever been to Charleston you know we have absolutely zero change in elevation so finding a place to actually ski was impossible. I thought it would be funny to simply have Bryan pose in front of classic Charleston landmarks and create a sort of ad campaign for the South's hottest new ski town. With the help of my friend and fellow wedding photographer Nick Gore, we set out to create some hilarious yet professional looking ski photos in Charleston.

The first setup was the most dramatic. I knew I wanted to embellish the snow that was falling, and the best way to do that is to underexpose the ambient light while backlighting the scene with a single strobe. To make everything fast and easy I used two Profoto B1 500watt heads. These lights break down quickly, are built like tanks, and offer the added advantage of being able to be controlled wirelessly from the Profoto Air Remote. I set one Profoto B1 behind Bryan to give him a rear edge light and also backlight all the falling snow. This strobe was set to about half power. 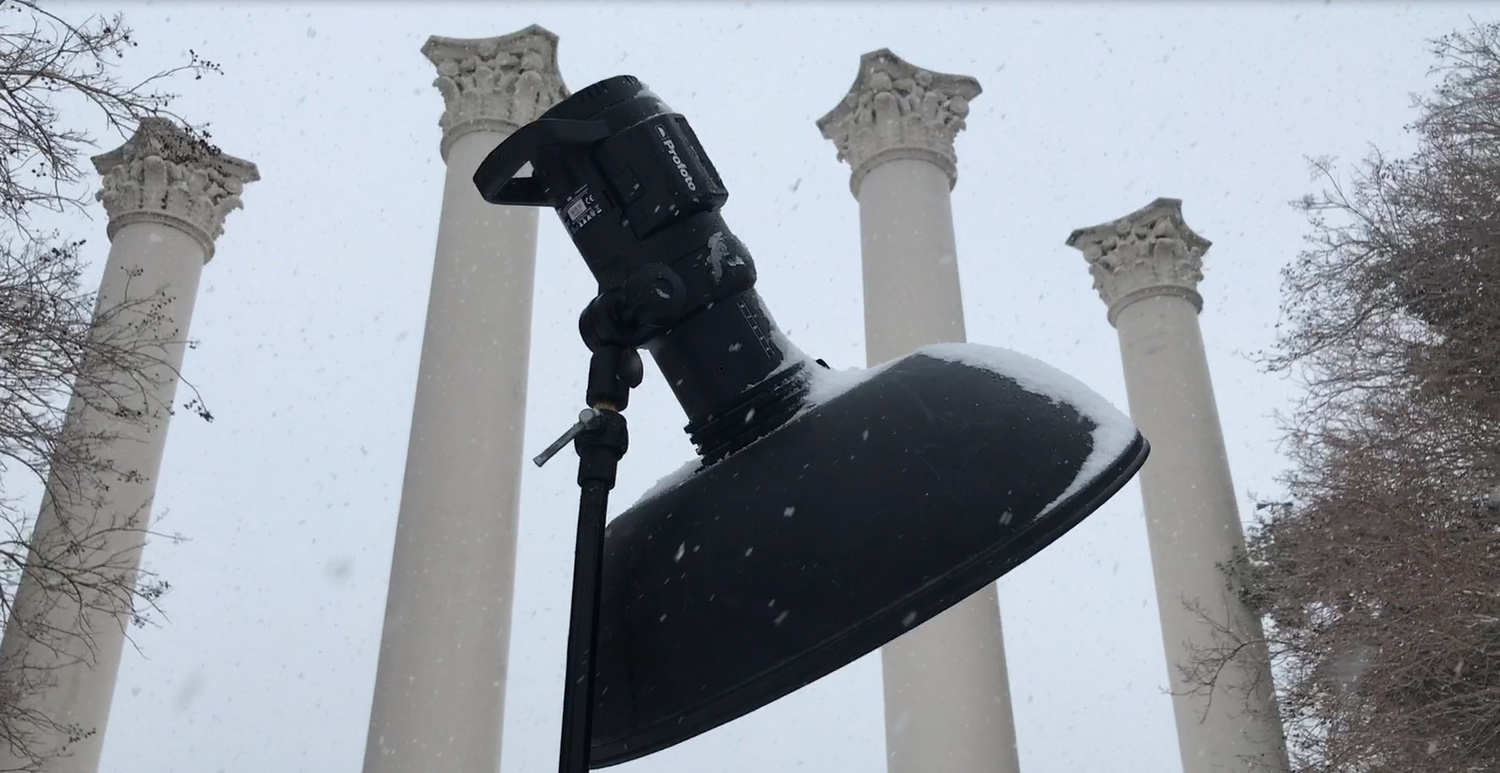 For the second light or key light, I used another Profoto B1 light fitted with a Profoto Beauty Dish and Grid. I really love this light because it gives a hard shadow on my subject but it is still a little softer than a normal barebulb flash or flash with a reflector dish. The grid helped contain some of the spill only on Bryan but more than anything it kept my dish dry from the falling snow. You honestly could have produced similar photos without the grid but I had it on so I used it. This flash was set to about full power because the grid does eat up a lot of light.

The camera I used for this shoot was the new Nikon D850 with the Tamron 15 - 30mm 2.8 lens. I used this lens because I wanted to shoot wider than normal and capture as much of the landscape as possible. This is a completely different approach I took with my recent video How To Control Your Background with a 70 - 200mm Lens where I was intentionally trying to remove distracting elements from my photo. I absolutely love this lens and it's great for shooting astrophotography as well. The only problem with this lens is it doesn't have a substantial lens hood because it is such a wide lens, and that means every little bit of snow that hit the lens could potentially cause problems. By holding the lens down as much as possible and wiping it off between sessions, I was shocked that there really wasn't a lot of water drops showing up in my images.  Below you can see just how much a difference the backlight creates in making the snow show up compared to the ambient only frame. 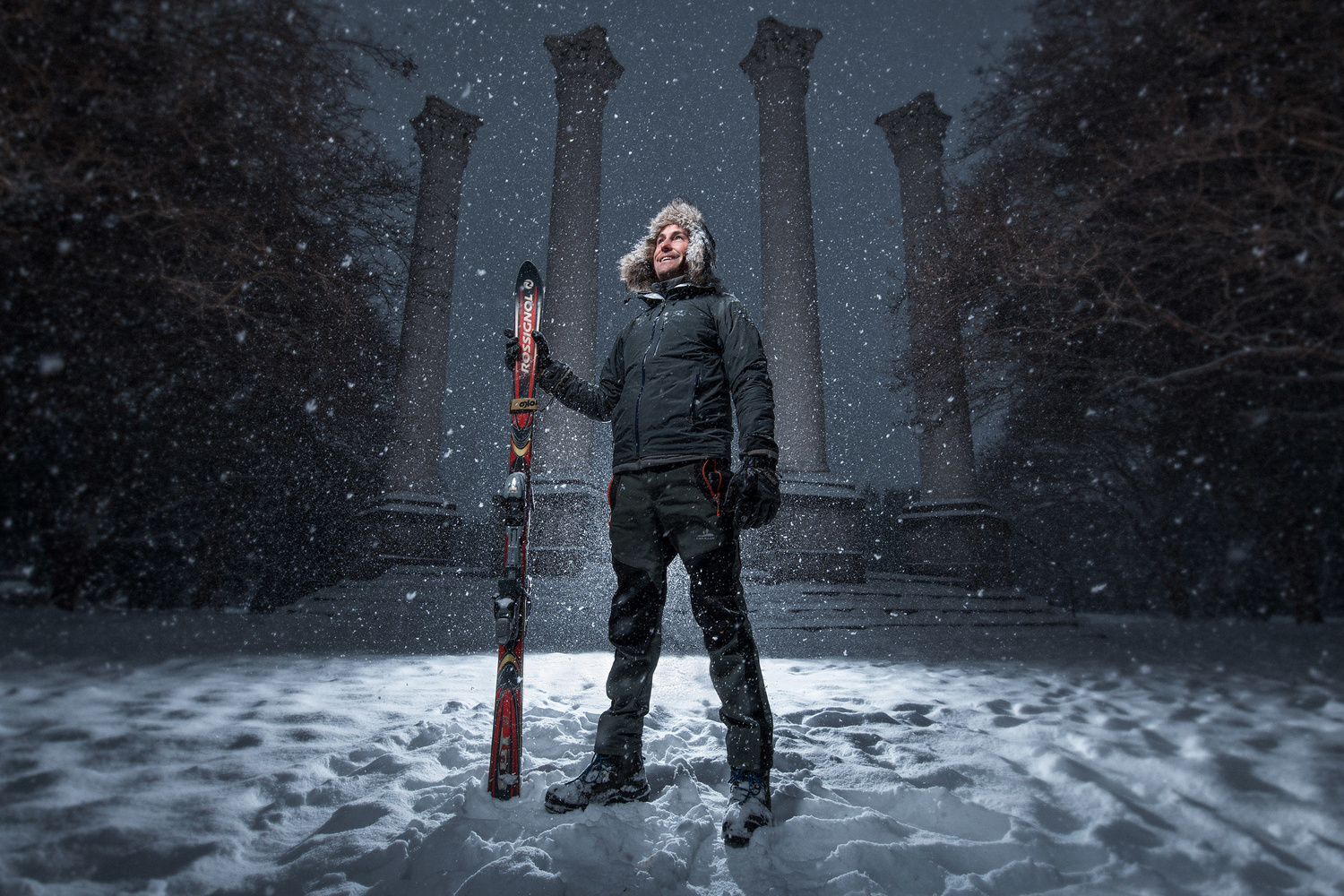 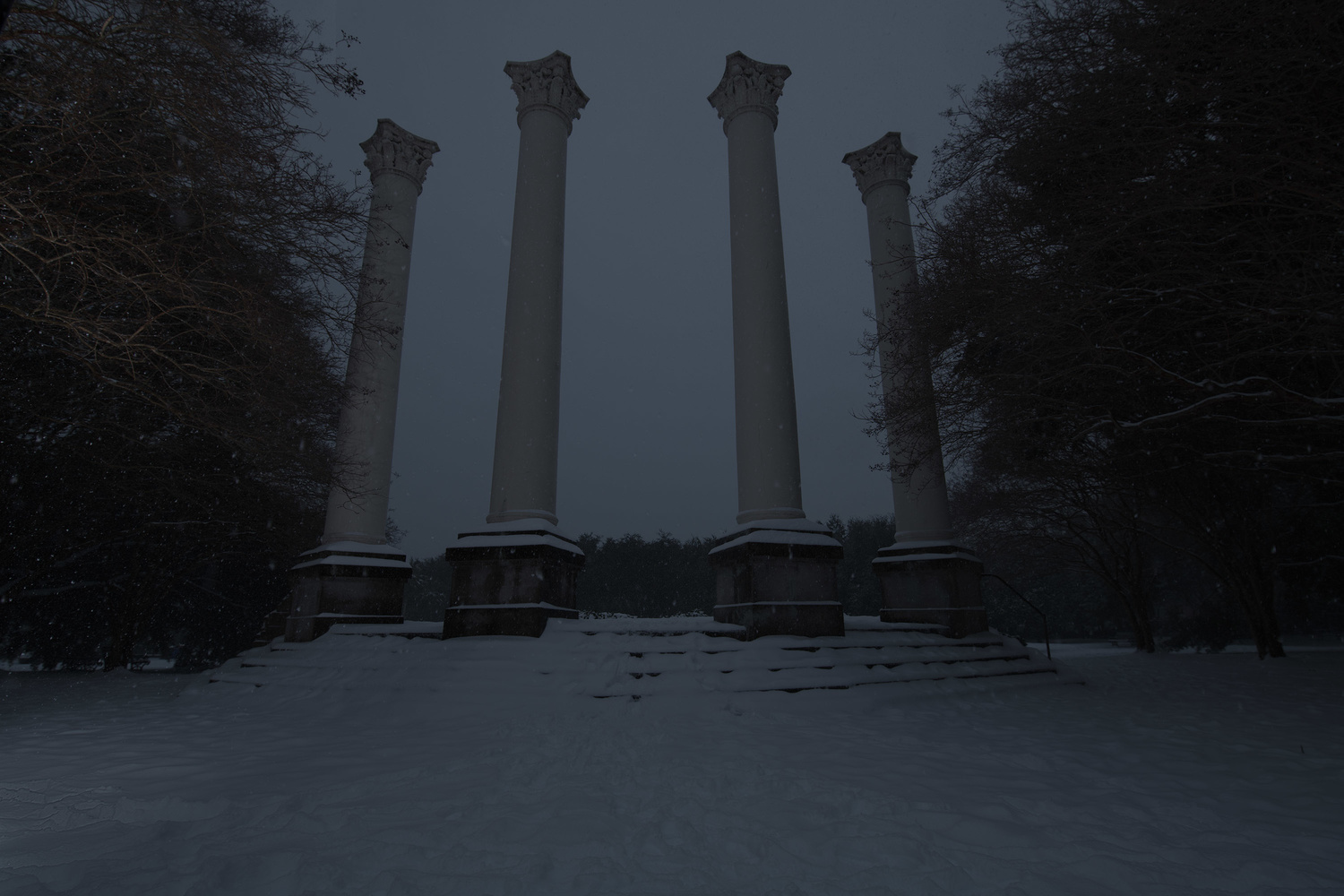 The next location we went to was the Queen Street Grocery. I love this little corner store and it really represents the homegrown shops that Charleston is known for. Here I switched things up and lit the scene with just a bare bulb Profoto B1 light. This allowed me to back the light up considerably and add some hard directional light to an otherwise overcast scene. I believe the setting on the Profoto light for this shot was set to level 4.

The next location was along the iconic Four Corners of Law in the heart of Broad Street. This road is probably the most iconic street in all of Charleston and I knew I wanted to create something here as well. This shot was taken with just a simple beauty dish as a key light and a slightly underexposed ambient exposure.

One of the final locations we shot was the Waterfront Park in the heart of the market district. At this point, I was kind of running out of light and I was also running out of unique ideas to do with Bryan. My initial idea was to backlight the scene much like the first photo above, but I was not a big fan of the light falloff caused in the background. It looked just a little too amateur for me. If only I had packed one of my Profoto Spot Grids, I probably could have backlit the scene with zero spill hitting the ground which would have produced the look I was imagining, but unfortunately, I left home without that light modifier. All that being said, I think it's super important to emphasize just how great a simple portrait can be with a single light source mixed with some ambient light. It's easy to turn all "photo geek" and start adding lights here and there but at the end of the day, especially for editorial type work, sometimes a single light is all you need. For this shot I had Bryan remove his hat and hold it as if he had just completed a few long runs and was wrapping up a day on the slopes. If only we had some hot chocolate and chili.

The final shot planned was to shoot the iconic Pineapple Fountain. Everyone who visits Charleston probably takes a photo in front of this thing and it was pretty interesting to see it completely frozen over. Since the light was pretty much done at this point, I knew I had to somehow light the background separately from Bryan. As you can see in the video above, the ambient exposure on the fountain was not doing me any favors so I opted to place a single Profoto B1 head 90 degrees from my camera and shoot it towards the fountain. In order to make this light look natural and fall off evenly across the frame, I had to place the light pretty far away so the spill was as even as possible. I would say the light was about 30' away from the fountain at least. The key light was the normal Profoto beauty dish and grid. I can't remember the power settings on this shot but I'm sure they were much lower because the ambient light was almost completely dark.

All in all, I would say this was a pretty successful personal shoot considering it was thrown together so quickly. Luckily I had a buddy who had not one but two amazing outfits to wear, and I also had a few friends downtown who were able to help as well. I wish I had more time and more models to really flesh this concept out even more but unfortunately, it will probably be another decade until I can attempt this again.

I also want to point out that as photographers, it should be your top priority to go out and make new art as often as you can. This was a silly personal project I literally threw together in a few hours but it was 100% worth doing. Not only was this shoot crucial for our 30 for 30 series, but I was actually able to pitch these images to a few magazines and gain some free publicity. As of the writing of this, Charleston City Paper has published a funny satire article on their site using these images and using some of the tips I learned in Monte Isom's Making Real Money, I was able to put a little money in my pocket as well. To this day, I do not think there is a single personal project I have done as a photographer that didn't make me money or at least pay for the production. I hope anyone reading this will take their own personal projects seriously and push themselves to go out and produce new work despite the thousands of reasons keeping you inside sitting on your butts. 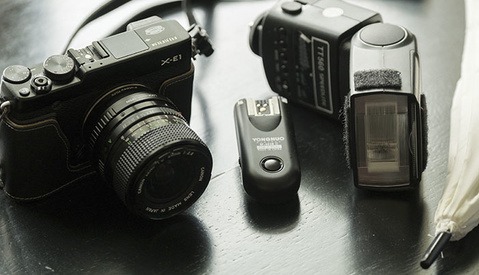 Love that first and last shot

@Patrick 2 questions:
1. How did Profoto B1 handle low temperature and a lot of snow? How waterproof is it?
2. How did YOU managed to drive the car with your world-famous boots? :P

Anyway cool idea, cool shots and i hope you've managed to fix the isolation rubber inside your car.

1) The lights held up really well. There was a point when the batteries would reach half power and would suddenly turn off. The sessions between each location was only about 30 mins so I'm not sure how they would do if the lights were outside for hours. I'm also not sure how weather sealed the units are in general...maybe Profoto would advice me NOT to use them in this way ahaha

2) Very good question. Ironically this is one of the first times I've been able to use my boots for conditions they were actually created for. But yes, switching from gas to break was a bit difficult. I therefore never used the break :)

love the idea. cool shots. i'm not sure about the blizzard title though. looks like about 2-3 inches at best. being from massachusetts we probably would not even shovel that, and school might have a 2 hour delay. we got a foot from this same storm and the next day life is back to normal. enjoy the snow.

We got about 5-6 inches in a matter of 3-5 hours. It was insane! I grew up in Anchorage so yeah it's not the same but it was still a lot of snow. The last time it "snowed" in Charleston was about 10 years ago and I don't think it even covered the streets.

And at the moment, Charleston has been shut down for 3 days now. No one is driving, schools are all closed, and the pizza I just ordered will not be delivered....things are getting crazy here

when the pizza guys call it quits then shit just got real !!

This is great, nice shots. And super funny watching you all in the snow lolol

The retro suit is fantastic

looks like fun. profoto b1s can take a beating. mine have fallen over at least twice.

I absolutely love the shots you pulled off in the conditions, great job

Video, personal photography project, and you made some money off of it? Well done, Patrick. Great concept and images!