How I Shot This Fall Editorial in My Living Room

In this article, take a behind the scenes look into how I shot this fall-themed shoot in my 8x8-foot living room.

To make great images, you do not need a large space or thousands of dollars of lighting. For this series of images, I created them all in the heart of my living room. Simplicity is key.

In this shoot, I wanted to keep the lighting simple and consistent throughout the set of images. I wanted to evoke a feeling of warmth and depict early fall vibes. In this case, I shifted my setup to face a massive ten-foot window and used that as my main source of light. I let the spontaneity of the natural light shape the outcome of my shoot. To keep the light consistent on my subject, I placed an Aputure 120d constant LED light with a 35-inch Light Dome and placed it at a 45-degree angle slightly above my subject. We also shot this during sunset time, so the light was low in the sky and consistently shining through the massive window onto the scene. To shape it around the scene, we held up flags or opened the blinds to sculpt the shadows and where the light was hitting. To create separation from the background, I placed an Aputure LS20 mini light directly behind the model as a backlight. Lastly, to fill in the shadows, I placed a large 5-in-1 reflector to the left to bounce some more light into the scene.

Lighting: Natural light from 10-foot window directly in front as fill. The key light was a Aputure 120d placed overhead, one foot above the model.

Lighting: Natural light from 10-foot window directly in front as fill. The key light was a Aputure 120d placed overhead, one foot above the model.

Lighting: Natural light from 10-foot window directly in front as fill. The key light was a Aputure 120d at a 45-degree angle, five feet from the model. Backlight was a LS 20 directly behind the model.

After shooting the photos, as most of them were already pretty well exposed in camera, the post-processing was not so extensive. I started off by doing basic universal Camera Raw adjustments like adjusting the overall exposure, lifting the shadows, and raising the saturation. Once I was happy with the overall look, I jumped straight into my sharpening process. I made a high-pass layer at six percent and put that on top of a grain layer at three percent. This gave me a nice and clear look to the overall aesthetic. It really helped bring out the textures in the clothes she was wearing and the leaves in the set. I then did dodge and burn, lightened the lights, and darkened the darks. The aim was to create a light and airy feel, but maintain rich overall contrast. The last step I did was the color grade, which consisted of putting red in the shadows and highlights and magenta in the midtones. 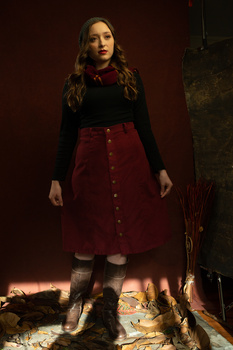 I hope this article was helpful in breaking down this set of photos, and show you that you don't need a large space to create great photos.

Thanks David! Appreciate the kind words

The BTS shots look like a studio larger than 8x8 feet.

Ok. Thank you for your observation. My sets are usually done in a very small space. Sorry if the measurements are not exact.

Lovely article, thanks for sharing! 😊

Of course! Thanks for reading! :D love your articles about how you shot stuff too!

awesome works! your backdrop selections are gorgeous, where did you get it?

Thanks so much for the kind words! My backdrops are from Gravity Backdrops

Would you mind to tell us the focal lengths you're using? (This looks way bigger than 8 foot, more like 12 or 14 or even wider. I shoot on 10x10 sometime and it barely fits for a portrait or a 2/3.)

Sure! I shoot on a 35mm sigma. It is 8ft or so. For this setup I placed toward my window. The room is around 20ft long but not very wide. So for these I was backed up all the way to the window. One of the reasons I shoot so wide. Hope that helps

I absolutely enjoyed reading your article and I was immediately impressed by your lighting and shadow interact on your images. I am wondering how you created the shadows?

Thanks so much for the very kind and supportive words! To answer your question, the shadows were created holding flags up and blocking the light from the desired areas. My flags are 2x3ft pieces of foam core. Hope this helps!

Amazing!
thanks for sharing