I do not adhere to a certain style and that gives me a lot of freedom.

If you have not read, my the first part of this article be sure to check it out.

You can get amazing photos almost no matter the conditions. Especially if you do not adhere to arbitrary rules and expectations from fellow photographers. In my editing, I do not try to please anyone and I just let my creative juices run free. Sometimes I try several different edits before I’m happy other times I just go with the flow. I do however try to edit the photo in an optimal way. In a way, I think is “best” and what works best for me.

In the below images I share more before / after photos and talk about the editing from the stunning location Stokksnes in Iceland. If you want to check out my video guide to this location, be sure to check that one out too here.

As in the first part I only show images which include the entire mountains and in a horizontal format.

As you might have seen in the previous article, the foregrounds at this location vary quite a lot. 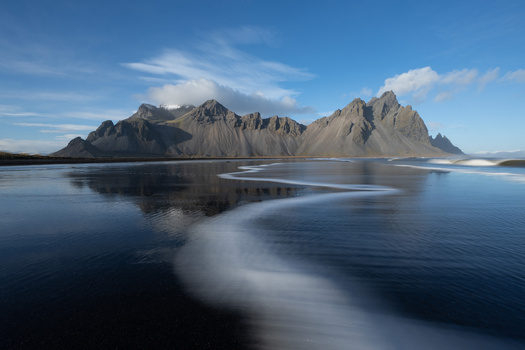 In this first image taken back in October 2018, I was showing my workshop group how to get the reflection from the beach and how you can use the foam from the water as a leading line leading into the photo. Because of the blue sky with a couple of white clouds, my initial idea for the edit was a black and white with a nice dark sky. I did not think the first edit worked out since I had a hard time differentiating between the mountains, clouds and background sky. I tried turning on some colors again and it only added the blue, which I really liked for the dark tones and enabled me to isolate each element of the scene.

On the same day, but closer to sunset I found myself along the lagoon in front of the mountains. Here I tried a few different shots with my 12-24mm f/4 from Sony. Even though 12mm is enough to get the entirety of the mountains within the frame, I made an even bigger panorama out of it. With an edit where I added a lot of contrast to the highlights, I was able to pull out the colors of the weak sunset. I added a huge flare to push the sci-fi inspiration of the image. It feels a bit like another planet. 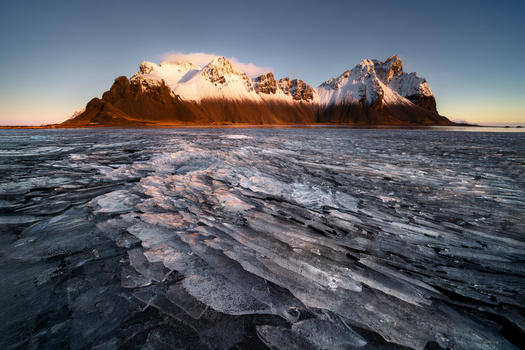 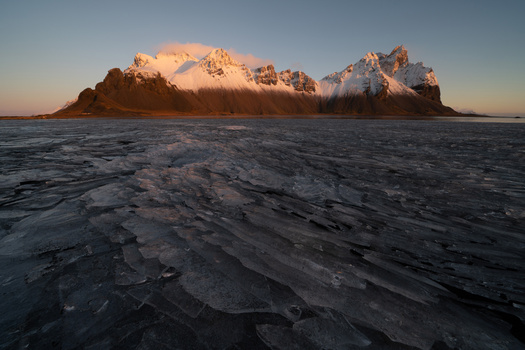 I went to Stokksnes three times during November. Each with unique conditions resulting in very different images. On the first visit, which was at sunrise some of the lagoon in front of the mountains was frozen. Some of the ice had cracked and had been pushed into these fascinating layers, which worked as a beautiful and unique foreground. With a light edit and some dodge and burning on the ice, I emphasized the leading elements in the ice. 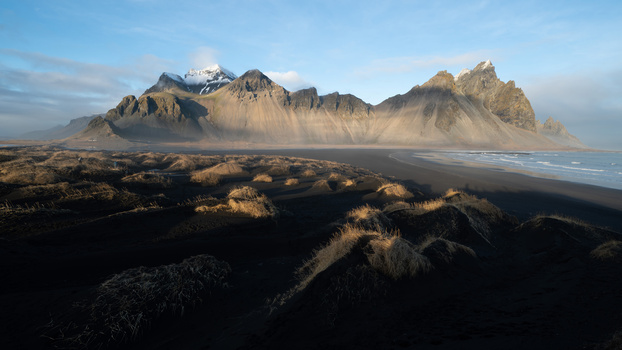 On the second visit this November, the conditions did not look too promising. Yet, for the first half hour we did have the sun hit the foreground lighting up the grass among the black sand. On top of that, the light from the sun was reflected in the lagoon up on the mountains. This gave some interesting light on the mountains, which could have made for a cool timelapse. There were also a bit of mist in the air adding to the atmosphere. The edit was quite simple as I did not want to add too much contrast, as the mist would disappear. I worked mainly on adding some contrast to the sky to show of the clouds.

On the third visit, we again had quite unimpressive conditions. The sky were fairly boring but we did have some mist rolling in from the sea. Trying to find some interesting compositions for the foreground I saw how the waves came rolling around the stone in the foreground. The water created a small pool, which emptied out when the water receded. I tried to align the exposure with the receding water and a few different shutter speeds. After a few tries I got the above photo with a shutter speed of four seconds and knew instantly this would be one of my favorite photos of the year. In the edit, I tried to emphasize the characteristic lines from the water and the atmosphere, while toning down the uninteresting sky. Color wise I added a minor cross processing of 30/70 warm and cold tones as there were not many colors to begin with. Yes, I know some of you are thinking “black and white”, but I disagree. 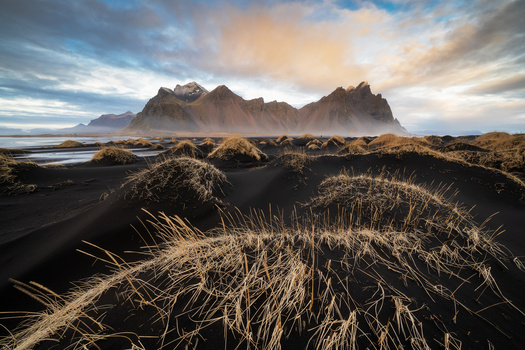 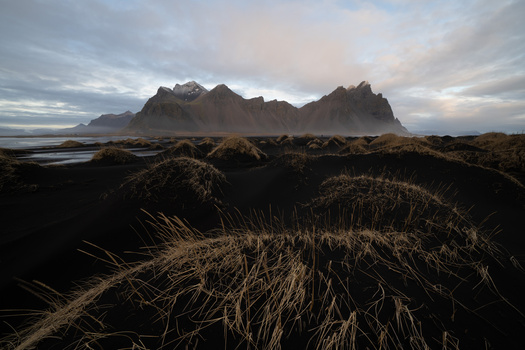 Having already caught a fantastic image that day, I was satisfied with the visit. I looked around in the surrounding dunes and tried out a composition I had found on an earlier visit. Despite the nice foreground with the swirling grass, the conditions did not offer much. We did get a bit of colors in the clouds but nothing worth celebrating.

It is impressive returning to the same location so many times, can continue to offer something new. Of course, it is a big location and there are countless foregrounds and compositions among the dunes.

Despite the many visits and varying conditions, I really think I have come away with something unique and interesting each time. By not adhering to a certain style, I open up my possibilities of getting something unique from each visit because each visit is unique. I am not trying to force a certain vision onto a photo, but I use a broad repertoire of editing techniques and tools as to be able to optimize each photo on its own premises.

Some photos do inspire me more than others and I also go through a curating process when deciding upon which photo to edit and which ones to be left on the hard drive forever. However, I often find that the “optimal” photo from a specific visit I choose often comes down to the composition rather than the weather conditions and light, although these two factors of course also are important and adds a lot to the final image.

I would like to hear your thoughts on all of this below.

"In the below images I share more before / after photos and talk about the editing" Are the image just not loading at all in my browser... or are there no images beyond the banner??

There should indeed be images. Try refreshing the browser. I'll hand this issue over to the technical people. It seemed to also be a problem with my last article.

Restarted the computer and everything. Running latest chrome, on MBP2018 15", with Ghostery and UBlock extensions,

Turning off Ublock, and refreshing the page let the images show, so for some reason the images are being blocked by my ad blocker.

Interesting. I'm not using an Adblocker, so it might be a broader problem than that...

I'm using an Adblock Plus and at first I also didn't see any images. I discovered them by switching to an "article mode" thanks to one of my Chrome plugins. After refreshing the page images popped-up. But with some I had an issue with before/after slider stuck in the middle and not moving to any side. Another refresh and it all started working good. Weird and inconsistent behavior. Thanks Mads Peter Iversen for forwarding it to support team. :)