The iPhone 7 Plus Fashion Photoshoot: Blondes, Brunettes, and Bokeh

What happens when you throw together a shoot with two fashion models, one photographer, and an iPhone? We went ahead and found out for ourselves. As a professional photographer, the most popular question I receive on a daily basis is, "What camera and lens do you shoot with?" I also hear "My camera isn't good. What camera and lens should I buy?" When asked that question, I always make sure to emphasize that great light trumps great gear every time. That inspired me to do put down the D810 and practice what I preach. And what better way than to break in my iPhone 7 Plus?

For the natural light location, we found a vacant porch that had a wooden overhang that produced nice, soft light. With the overhang, the light would hit our subject's evenly without the need for any strobes, modifiers, or reflectors. We used 100-percent natural light.

Professional fashion models, Maria and Nhi, were kind enough to take part in this shoot. You may have come across Maria in past articles, since we have worked together previously. 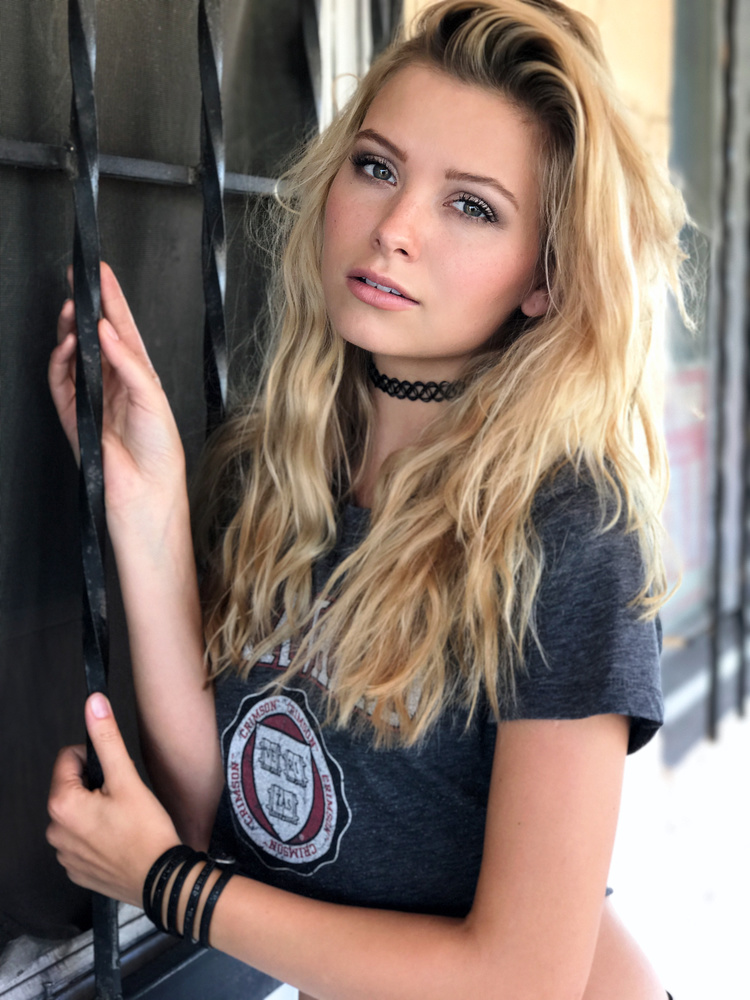 Shot with iPhone 7 Plus. Light retouching in Adobe Photoshop CC.

This was my first time trying out the new Portrait Mode offered in Apple's iOS 10.1 exclusively for the Apple iPhone 7 Plus, and boy, was I impressed with it. It created a very DSLR-like bokeh effect coupled with great quality photos in the shade. Let's take a look straight out of the camera: 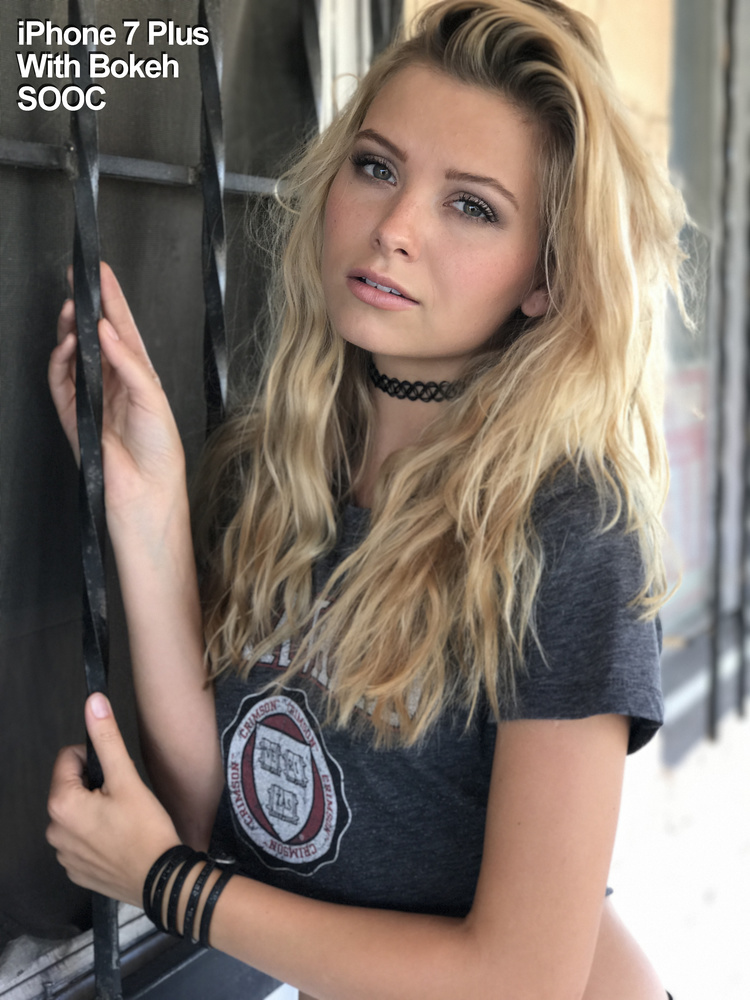 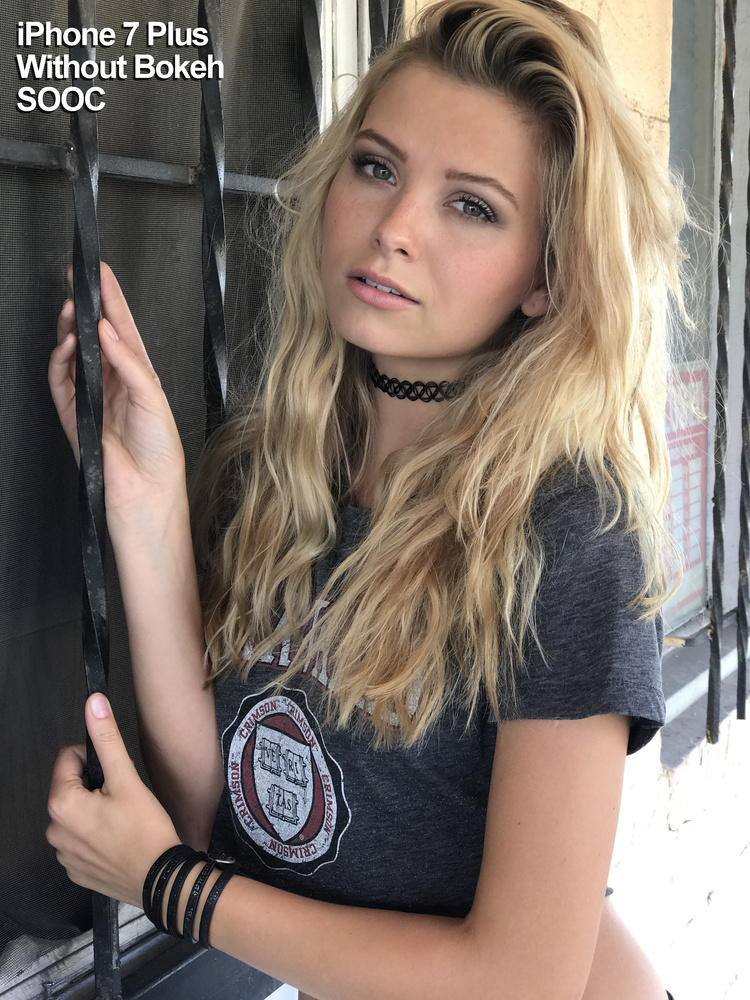 As I mentioned earlier, I was quite impressed with the bokeh effect created, although it isn't perfect. Take a look again at the right side of Maria's hair, you can see that the effect gets a little soft and odd. But if you take it for what it is, a smartphone, it is quite an impressive feature Apple has put out for their new phone. Let's take another look: 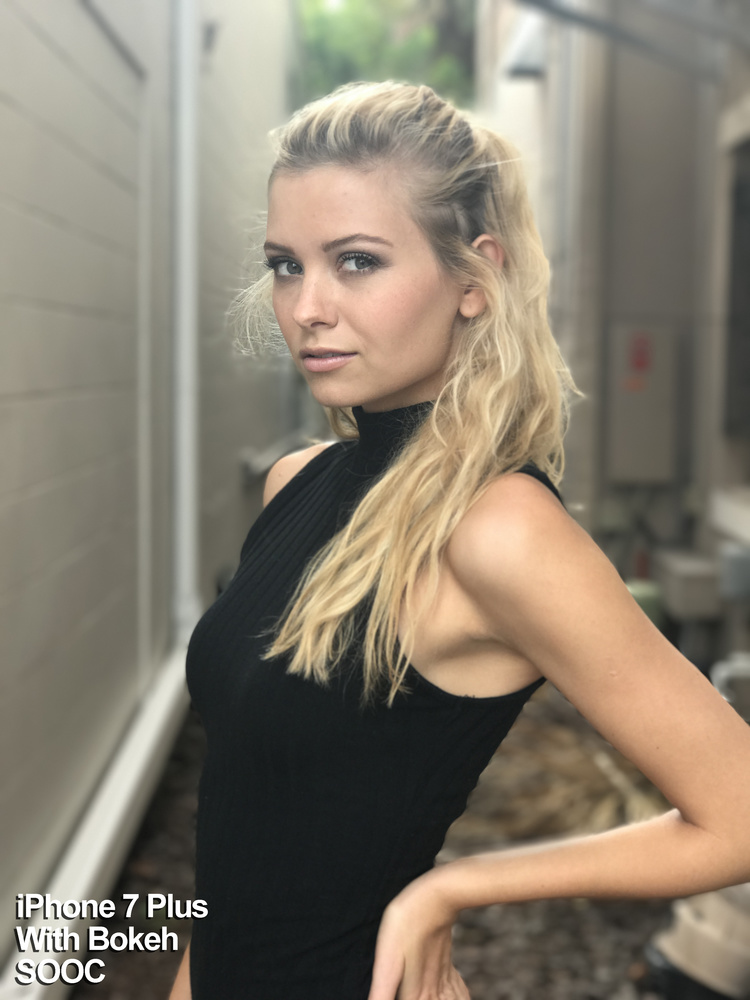 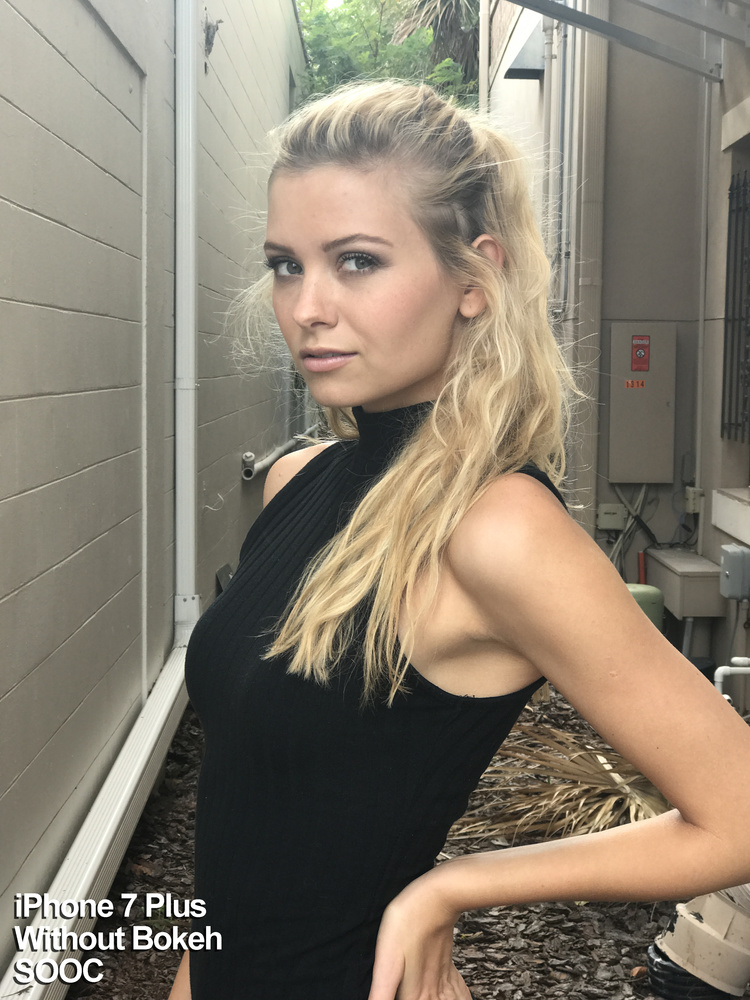 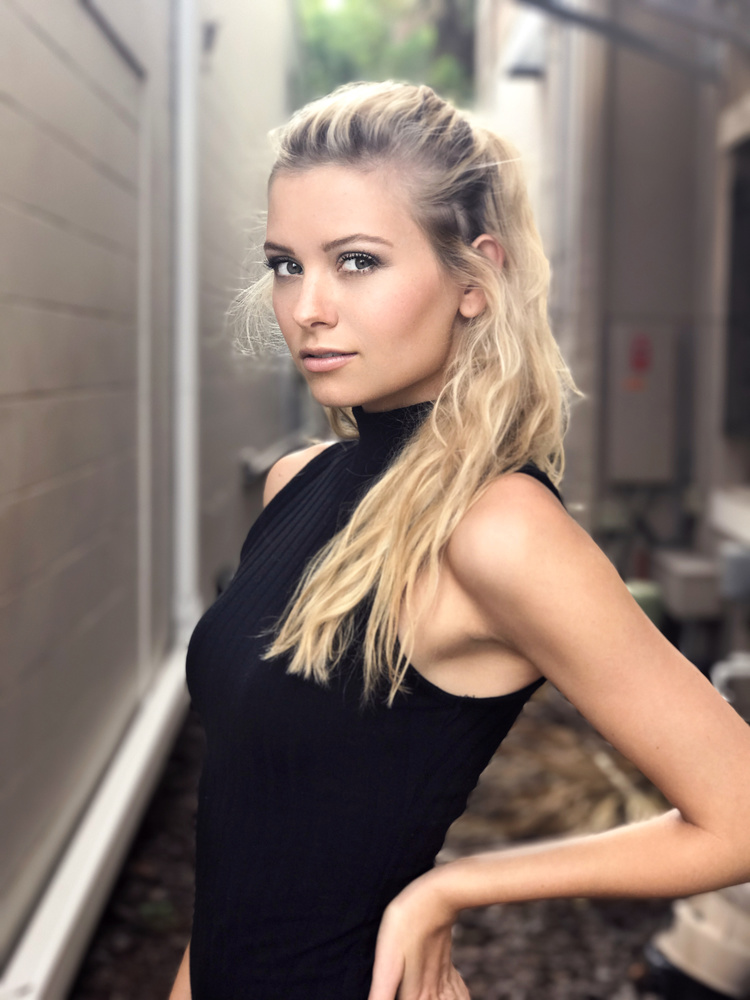 Shot with iPhone 7 Plus. Retouched in Adobe Photoshop CC. 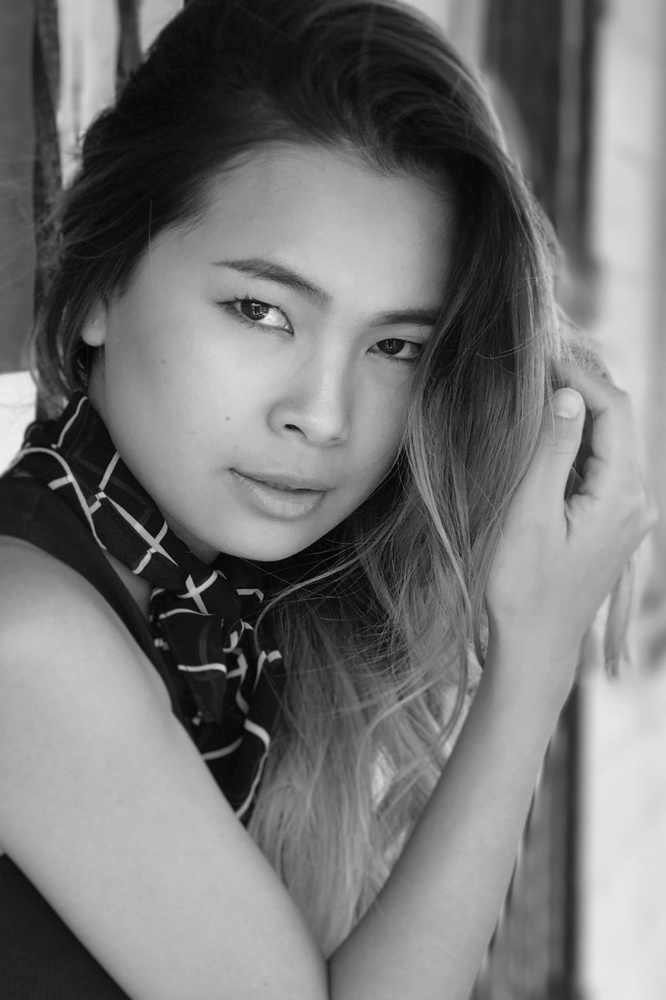 Shot with iPhone 7 Plus, cropped.

As you can see, there are flaws with the bokeh mode if you take a look where Nhi's arm is in the photo above. It looks odd where there appear to be feathering issues with the pattern of the door.

I'm as guilty as most photographers are when is comes to G.A.S. (gear acquisition syndrome), but at the end of the day, the quality of the photographs we produce all come down to the photographer, the light, the subject, and then the gear. Let's stop putting the carriage in front of the horse when working on our craft.

With that said, what do you think of the new iPhone 7 Plus photos I've shared with you? Share your thoughts!

What most professional photographers do not understand is that in a short time anyone can get good images and paid work will decrease more every day ... In fact, this is already happening.

Not sure where you are looking for jobs, but paid work is still around, even with budgets like in the "old days". What seems to happen is that there is a lot more work and thus a lot more badly paid work. Money is still the same.

Why do you believe that professional photographers are less aware than the general public about the expansion of interest in photography and the contracting of the marketplace. You just can't make a statement as emphatic as that without backing it up. It is my opinion that anyone making their living from creating pictures is more acutely aware of the contraction both in size and profitability of this industry for the long term.

Thank you Nick. Beautiful results (either way) and helpful side by sides.

They're definitely very nice images from a phone but nothing you could not obtain more reliably using editing software afterwards. The fact that the iPhone is having to *guess* what to blur will always be a factor that deters professionals from using it imho

Agreed. Not necessarily saying that professionals should start shooting with phones tomorrow, but instead remembering skills and creativity trump gear all day, everyday.

That fake iPhone bokeh is ugly as F***

The film "Groundhog Day" immediately comes to mind everytime I see one of these "photoshoot shot with an iPhone" articles...

Thank goodness my carriage is a whole set of various L lenses and Sigmas to drive my horse carriage. I'm glad your system works for you, but i'll disagree with you and say the quality of my camera and lenses is directly and 100% proportional to the quality of my photos. ;)

I believe your missing my main point Jay. Would love to see some of your photos added to your portfolio on your Fstoppers profile!

I see your point, but for me, without good gear, i'm useless if i can't maintain standards of quality. Just uploaded some of my photos for ya in my profile!. Not a single camera phone was harmed :)

Thanks for adding those Jay! Great work!

Thanks Nick, i can say the same for yours as well :)

Tracking down an iPhone 7 Plus has not been an easy task. Definitely hope to have one in my hands by the end of the month!

I have ZERO worry about some guy/girl with an iPhone stealing clients from me.

The creme always rises to the top! :)

Funny to read the posts from scared photographers. The big picture with this is that more often than not you could get a fantastic picture with a phone in your pocket that you can instantly post on social media. This is 90% of what people need and want. If you want to go nuts you can photoshop it and make it look really good. All in your pocket. The writing is on the wall with this that eventually a phone will be able to do most of what people need. I'm a photographer and I'm excited about where this could go. Remember folks this is in beta.

You really think an iPhone could replace an expensive lens? You gotta be kidding me. And he processed those pictures! Without processing they look stunning already, but if you put an average looking person in front of the camera the picture will look just like an iphone shot. And even processed you can tell that those pictures weren't taken with professional gear. It looks flat and lacks micro contrast and of course sharpness. This has nothing to do with being scared. If an iPhone could live up to all the expensive lenses, then I'd practically the same as expensive gear. Good gear is good gear no matter if it's a phone or not.

Worth noting that portrait mode isn't available to all as 10.1 is still in Beta.

Personally, I'm not a fan of how the simulated bokeh makes the edges of the hair sort of have a blur, "shimmery" look.

Also, at the end of the day, even though the image quality is great, the focal length just doesn't do it for me. The iphone camera is a 31mm equivalent on full frame. I'd never shoot 3/4 or headshots at 31mm on a DSLR, I'd be shooting them at 85mm or longer.

I believe the portrait mode uses the telephoto lens, which is 56mm-equivalent.

Ah, still too wide for my taste

The fake bokeh hava a lot of artefacts and no depth. Anyway nice shoots!

For a phone and something on the go, I'm loving the new Portrait effect on my 7 Plus. I'd never rely on my iPhone for any paid or important shoot but it's a great feature to get a somewhat great photo on the go.