The Best Portrait Camera Ever - The Mamiya RZ67

Everyone has their baby. You know, that one camera that speaks to them in a way that all other cameras fall short. Of course, saying something like, "best portrait camera ever" is pretty loaded, but I calls it how I sees it! The Mamiya RZ67 is, for a variety of reasons, one of the best cameras ever made. In this article and accompanying video I'll give a birds eye view of the camera and its features, show a little work produced by it, and give you some insight into why this camera is at the top of the heap for me.

First, the elephant in the room: this is a film camera. I do, of course, have a soft spot for film, but don't let that get in your way of appreciating this beast. Even if you're an all digital shooter there's still a lot to appreciate here! First a touch of history of the camera. This camera is the little brother to the Mamiya RB67. The RB was released in 1970 and is a bonafide tank of a camera. With a normal lens and film back, it clocked in at almost six pounds! Add a prism finder and you're looking at a camera that weighs more than eight pounds. It was made of all metal, had no electronic parts, and was the very definition of workhorse. When it hit the market, it was an instant favorite with portrait photographers for its beautiful viewfinder, massive negative, and decent glass. It's a wonderful way to get into shooting the 6x7 format as a starting kit can be bought used for less than $300.

Times change, though, and electronics were slowly making their way into the latest and greatest cameras of the age. In 1982, Mamiya released the RZ67, a lighter, leaner, more advanced version of the RB. Gone was the all metal body and purely manual operation, along with about a pound of weight. In its place was a hard plastic shell, simple electronics, and a new set of extremely sharp lenses. The shutter speed could now be controlled from the camera itself, leading to more automated operation. You could now wind the film and cock the shutter in one motion, rather than having to advance the film separate from the body.

In the video, I go through the parts of the camera, but it basically consists of the film back, body, lens, and finder. Its modular design allows for the addition of a prism finder to laterally flip the image and enable eye level viewing, easy switching of the ground glass should you need grid lines, a rangefinder spot, or whatever your tastes, and switching of film backs mid-roll to allow you to shoot different film stocks or take polaroids. All of that is great and all, but the major selling point of this camera for me has always been the viewfinder.

If you've never looked into a medium format camera, this is the one that will spoil you for all others. The image is bright, super crisp, and has that 3D quality that medium format is known for. It sounds silly, but I remember the day I looked into the camera for the first time and I know that it was the turning point for me abandoning 35mm. It's that amazing. Of course, a pretty viewfinder wouldn't matter if the images it produced were garbage, but thankfully that's not the case. The RZ was the workhorse camera for Annie Leibovitz during much of the 80s and early 90s. If you're familiar with her work from that era (her finest, I think) then you've seen what this camera is capable of.

Take a look at the video for more in-depth thoughts about the camera. I think there's an F-bomb in there, so beware, but man I get excited about this camera! What's your favorite camera of all time? Do any speak to you? Do you have any questions or comments about your experience with the RZ? Sound off in the comments!

LOL'd at your opening paragraph and the pose w/ the swaddling babe. Wow!! - what splendid, gorgeous work and images! Thank you for sharing.

Never should have sold mine. Need to pick up another. Current film favs right now are my Hasselblad 500 and Mamiya 645 AFD. I cut my teeth with the surf magazines using a 1V so that camera will always feel like home.

Thank you, sir!I've never used a 1V. I really need to get over my reluctance surrounding 35mm, but I haven't met the camera to do it yet.

I've got a few old ones in my collection: Canon F1 1980 Olympics edition, Nikon FM and a Minolta SRT303b. A 50 and a 35 for each. I mainly use the F1 for street shooting downtown but I prefer to use the Hassy for that now as it's more of a conversation starter. We're local to each other so if you want to borrow one, just give a shout. I'll give you a roll of HP5 to start... ;)

Haha, I think I have a few 35mm rolls of HP5 collecting dust!

To be honest I did end up selling mine but WOW it's an amazing camera. I will say however...... I did prefer the Pentax 67ii over the RZ. BUT... they're both awesome and some of my best stuff was on the RZ.

BTW... Vincent Peters has only ever shot on the RZ and still does. Check him out if you haven't.

I've always been interested in the Pentax, but the slow sync speed and lack of backs always put me off.

So compare with Pentax 6x7, Mamiya RZ67 will be better?

No idea! I've never shot with one. Pentax people seem to love it, though. Maybe someone will let me borrow one for a shootout.

The Pentax shines with 1/1000s shutter speed and the ease of use...
But it's main feature for geeks is the ability to adapt tons of large format / exotic lenses, which are impossible to fit the Mamiya since it doesn't have an in-camera shutter.
For people wanting an out-of-the-box great camera, pair the Pentax with the standard 105/2.4 lens and it's hard to not fall in love in most cases :)

I went from a Mamiya 645Pro to a Pentax 67II and then an RZ ProII. The RZ was also my favorite and have been thinking about buying another. The rotating back, large Polaroids and bellows made it a great tool. I do miss viewing those large transparencies on the lightbox.

Great post Hans. Amazing portraits. And yes, the RZ67 is one of the best cameras ever made. A scanned 67 exposure at 9600x9600 DPI with 48-bit color depth will hold its own against the most expensive digital Phase One systems in terms of image quality. It truly is a timeless masterpiece of photographic equipment.

YEah, the quality is amazing. Now I just need to save up for a Nikon Coolscan 9000. ugh. 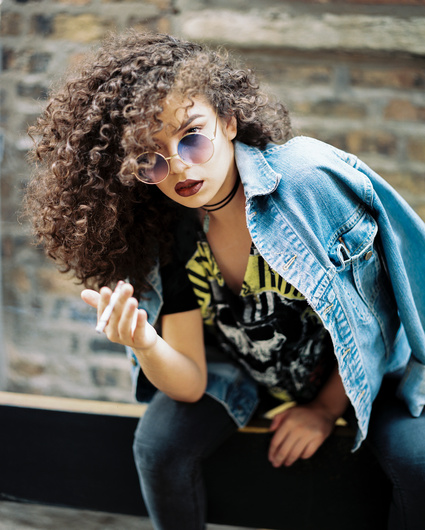 I've wanted one of these for some time now. I currently have a Mamiya 645 Super and I love it.

It's fun to shoot as a subject too. I love older cameras. 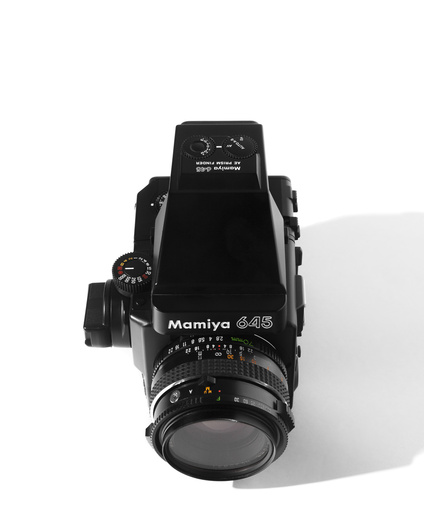 Nice, I had the three leaf shutter lenses in my 645Pro kit.

I shot with an RB67 with the 50, 90, and 150mm for about 20 years, starting in the mid 70's. I considered switching to an RZ, but the cost of replacing the body and the lenses was just too much. In the early-mid 90's, I switched to a Hasselblad 500 CM with the 40mm, 80, and 150mm because of the weight when I started focusing (so to speak) on landscapes. I'm shooting digital these days, but I sometimes fantasize about going back to medium format film and scanning it in.

Sold mine back in 2004. Ebay has some used from Japan for uber cheap. Also, you look like David Cross in the portrait of you cradling it like a baby. :)

My wife always said I look like a black David Cross. Ok, she never said that.

I see what you did there. You're gonna make me get on eBay and buy one to add to my film camera collection. I love my Hasselblad 503cw but I've always wanted an RZ67. I have nice little 35mm collection (see Picture), but it's time to add to the medium format collection. 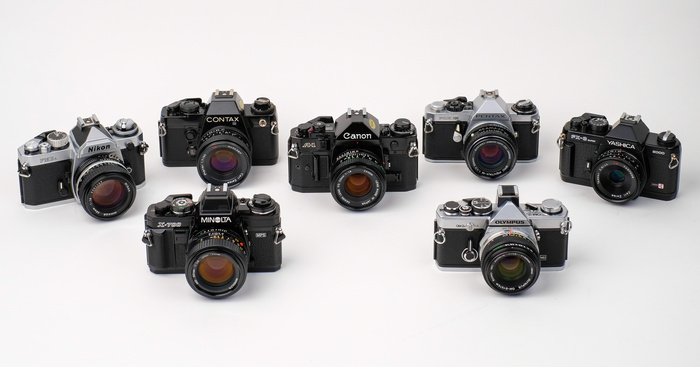 The Mamiya RZ67 is one of my bucket list cameras to get; the Mamiya 645 is another for when I want longer reach. Then there is the big daddy, the 4x5.
My first SLR is the Canon A-1; I bought that in 1980 and I still use it. I bought a New F-1 in 2013 and although the A-1 has sentimental value, the F-1 is my favorite. I haven't mastered speed loading with the F-1 since that loads counter-clockwise while the A-1 loads clockwise. At an air show featuring the Air Force Thunderbirds, I had to reload my A-1 during their performance; fortunately, it was during a lull during their performance where they were regrouping, but I was ready.

It is amazing, Hans, how you manage to write an entire post and make a video about this camera without ever mentioning the one characteristic that, more than any other, made it what it is: the revolving back. This allows you to flip from portrait to landscape without needing to move the tripod head or the camera.

In the video I do have a section about the revolving back. At about 2:09, I believe. Also, the RB did have a revolving back as well.

Very sorry, Hans, for not noticing that. My apologies. The dog ate my attention around 2:07, I believe it was.

On another note- your pictures are superb. Maybe you should do an article on how you scan your film.

Thank you! I did make a video a ways back about scanning C-41. It's here: https://fstoppers.com/film/scanning-c-41-film-quick-and-dirty-method-146316

Although now I use Silverfast and my method is a bit different. Maybe it's time for an update!

Thank you, Hans, that is very helpful. If you do an update I am sure it will be enthusiastically received.

6x7 format in general was great to shoot. Sold my Pentax 67II when I moved from Europe to Canada and switched to digital completely in 2004. Still have loads of developed 6x7 slides form travels, my kids will love to see them on projector like vintage source of good times :) Film is great :) digital is too :). Shooting is so rewarding :) cheers