One of the most popular lens lengths on the market is the 50mm. As a Canon shooter I have a few different choices to pick from at that length, but the three most popular seem to be the 50mm 1.8, 50mm 1.4 and 50mm 1.2. While on a shoot last week I decided to play with all three lenses and shoot a few photos to see how different each lens was from each other. Here are my results.

I feel like I should preface this article by saying this is not by any means a comprehensive test. A group of photographers were out shooting and I realized we had the full variety of 50mm lenses (1.8, 1.4, and 1.2) so I asked if I could borrow each for a couple shots. In order to keep things fair I shot each of these photos with the exact same settings, from the exact same distance, using the same camera. I decided to shoot all the photos using an aperture of f2.0 so that it was even across the board. I realize that the 50mm 1.2 lens is a great performer even when wide open so shooting at f2.0 might be limiting it's potential but I thought it would be nice to see all the images using the exact same settings. Lastly, the images being shown are JPEG's coming straight from the camera. Any processing (contrast, colors, sharpening) were done all in the Canon 5D Mark III using the Camera Standard profile. 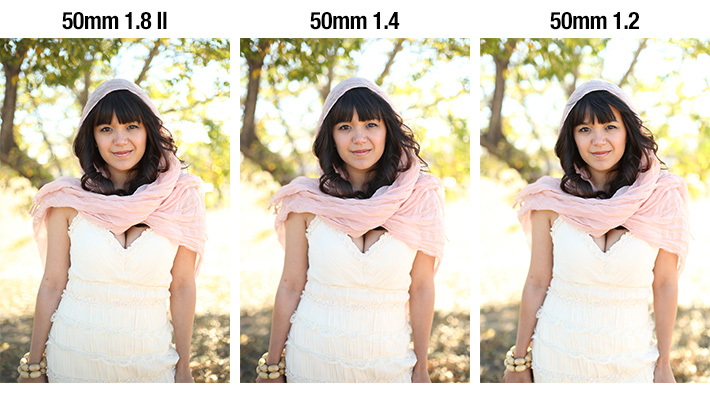 In order to get a good close up look at each file I have uploaded the high resolution images as well for comparison. You can view them by clicking the links here. Photo from 50mm 1.8, 50mm 1.4, 50mm 1.2.

Here is another example. 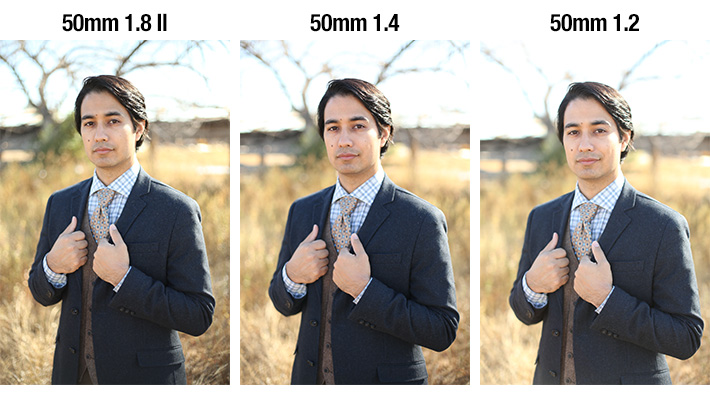 As I mentioned in the beginning this was by no means a comprehensive test. But it really was quite eye opening for me and the other photographers with me that day. I was surprised that at f2.0 I really didn't notice as much difference as I thought I would between each of the three lenses. I plan on doing more of these tests on upcoming shoots and trying out a number of different scenarios. But I thought it would be fun for now to share these shots. Hopefully if you are a photographer sporting the 50mm 1.8 lens on your camera you can hold your head high and carry it with confidence knowing that your $100 lens is actually quite nice!

It's all about the bokeh. Even at the same aperture setting, the bokeh is smoother on the better lenses.

Yeah! I never really compared them side by side but daaaamn it's night and day! (bokeh wise..)

but the 50 is a normal lens where bokeh is a second thought. For portraits bokeh does matter but 50 1.4 is a general low light lens.

Maybe I'm crazy but looking at these images made me realize that it doesn't matter at all! I actually found the 1.8 II images to be my favorite. The reality is 100% of your clients will never be able to tell and ironically enough like me they may actually prefer less Bokeh!

Yep same page here, in both pics I preferred the 1.8 II, maybe less is more

Just to be clear, I'd still buy the 1.2 (if Nikon made one with AF) simply because I shoot a lot of video and I think it would be really helpful in that field. I'm just saying that not a single client would ever be able to notice the difference in this type of shooting. If you were doing super shallow dof headshots with some crazy lighting then yeah it's a big deal but portraits like this....it's pretty nominal at best.

I like the picture taken with 50 1.8 because it shows more contrast, which is with me more interesting

Yes, I agree, the 1.8 is certainly the most punchy contrast, however the 1.2 is creamy. I'd probably rather have the 1.2 and punch up the contrast in post. However, at that price difference, I'd go with the Sigma 1.4. Also very creamy bokeh and contrast.

I think i speak for the even greater majority when i say:
The reality is 100% of your family will never be able to tell.
ALSO:
I agree with less Bokeh too at times. Sometimes it can just seem dreamy but often we put our subjects in such a beautiful scenery to have it out of the DOF that we just get a subject standing in front of just about anything when wide open.

If that's the standard to meet, the "does the family notice" test, all we need are the cameras in our phones!

It's also not only about the bokeh, I mean with the build and all, more expensive lenses are always way more robust than all the other lenses. But I agree that clients won't notice the difference.

You get what you pay for in build quality - I looked at the 1.8 and it's a perfectly good lens optically, but I felt for me I didn't much like the plastic manual focus ring at the front, so splashed for the 1.4 with a nice rubber focus ring and the Full Manual Override. It's twice the price but it feels like twice the lens when you've got it in your hands. Being comfortable with your kit and being able to use it easily and as second-nature is as important as the innate capabilities of the kit.

Exactly. Especially with solid post work it makes even less of a difference IMO.

In this comparison I actually prefer the look of the 1.8...seems to offer more contrast.

Yes, I agree and think the subject is the sharpest on the f/1.8. But it's a poorly kept secret that despite some lenses allowing very large apertures, they often need to be stepped down for optimal quality, while f/1.8 don't need as much. For example, the Nikkor 35/1.4 is much more expensive than the 35/1.8, but also less sharp wide open than the cheaper one wide open. So they're only useful if you desperately need any light you can get, or buy it for other reasons like lens build.

Extremely large apertures are just so good attractors of optical defects. They really bring them out.

The backgrounds in these images are and blown out and already high contrast. High aperture is not needed in these instances for subject separation, negating the real lens difference. Try the test again with less contrast and more background texture.

I own the 50mm Sigma and have tried going back to the nifty 50. The softness wide open is much more noticeable combined with higher ISO.

If it is about the bokeh for you, then Canon are not the lenses for you. Look at some of the Zeiss lenses, DOF falls off more rapidly than Canons.

It's all about the bokeh for this particular comparison. It's not the only thing a photographer should care about. And I completely agree - Canon's 50mm lenses are inferior to some other glass.

i completely agree with you brian--what that 1.2 does to backgrounds is just one of the many reasons i love my 50mm 1.2 and will happily keep shooting with it.

Only other fellow photographers and photo editors would really care about the bokeh. Am sure with a few adjustments the 1.8 can look even better. Regardless, regular off the street clients don;t really care about the slight differences...as long they look fab. That is all that matters and it a $100 lens does the job. Then that's a bonus.

Basically, what am getting from the article...you don;t have to spend $1400 to get a decent image.

Agreed. Anytime a beginner asks me advice on lenses it is always my first suggestion.

You can pick up a 50mm f1.4 D for about the same price, and I actually prefer it, apart from the focusing noise. Ideal world, I'd have a 50mm f1.4 G though, because of that reason. One day...

For studio or other controlled situations, probably so, but for anything where being able to focus quickly becomes an issue, the 1.8 really starts to show it's faults. For me, the Sigma 1.4 is a better value, but I'm not a really a studio or portrait guy.

I heard it's hit and miss on getting a good Sigma though.