I’m a huge fan of gimbal stabilizers, and absolutely love how easy it is to get dreamy, floating footage with these relatively inexpensive accessories. A lot of attention has been on products like the MoVi and Ronin, but other manufacturers have stepped up their game and are making products that are just as competitive in terms of features and price. One such item is the Moza Lite II, which I’ve been reviewing for the last few weeks.

I’ve previously used complex steadicam systems as well as other gimbal stabilizers, so I consider myself somewhat experienced when it comes to this kind of technology. I was humbled when I couldn’t initially get the Moza rig balanced properly, and was about to write it off until I got help from the Gudsen customer service and ended up using the Moza successfully on several shoots. I’ll explain my experience with it, and note some of the features, as well as some of the issues I experienced, below. 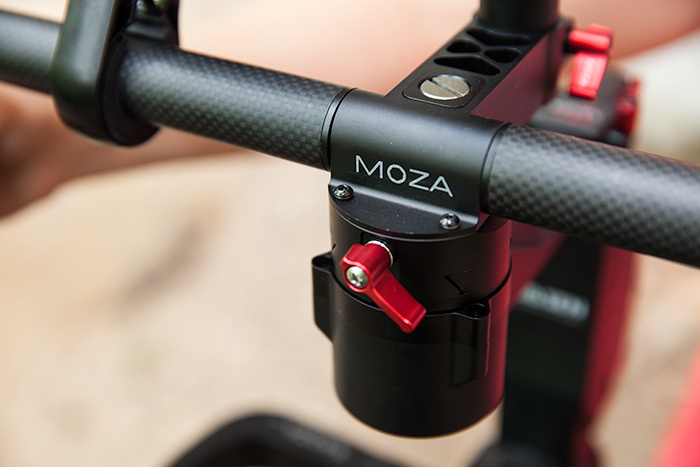 The Moza (pronounced MOE-ZWAH) Lite II Professional ships in its own rolling hard case, which is great for transporting the entire kit and all of the accessories to and from your location. It has durable handles, wheels, and snap locks- all around the case is perfect for this kit. I should note however that the size of the case is slightly larger than U.S. domestic flight carry-on allowed size, so expect that you will need to check it if you want to fly with this. With a sturdy case and using zipties or luggage locks, you won’t have to worry about anything being damaged by angry bagagge handlers. 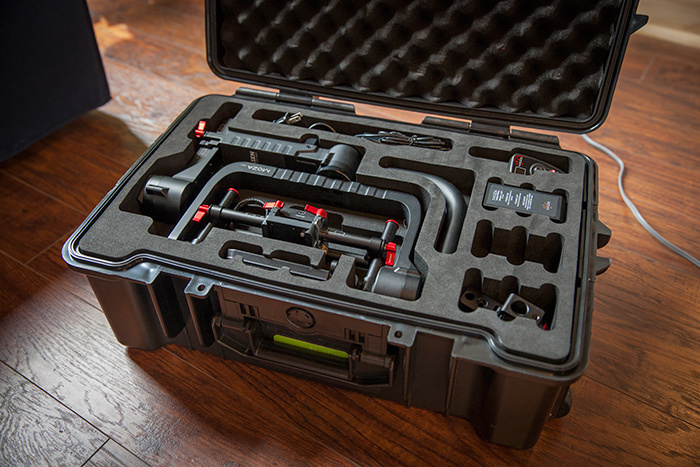 Inside the case you’ll find the kit components, but also a user manual and a separate quick-start guide. The instructions are OK to get you going, but you have to make sure your battery is charged before trying to power and balance your rig. (Be sure to charge the battery while it is not connected– the motors freak out if you try to charge the battery when mounted!) I'd recommend watching YouTube videos on setup and balancing rather than trying to follow the included directions.

To balance, you set up the included stand. The legs lock in an ‘up’ position, and the base opens up wide and provides a mounting point to place on a stand. The base however doesn’t lock into the open position, which seemed like an omission in terms of features, albeit a small one. Also the supports tend to get in the way with this particular design. I found myself having to pick up and turn the whole thing around frequently to access rear controls, rather than just being able to spin it freely around. One benefit to this design however, is that you can use one hand to fold up and carry the base if you're holding the gimbal with your other hand. 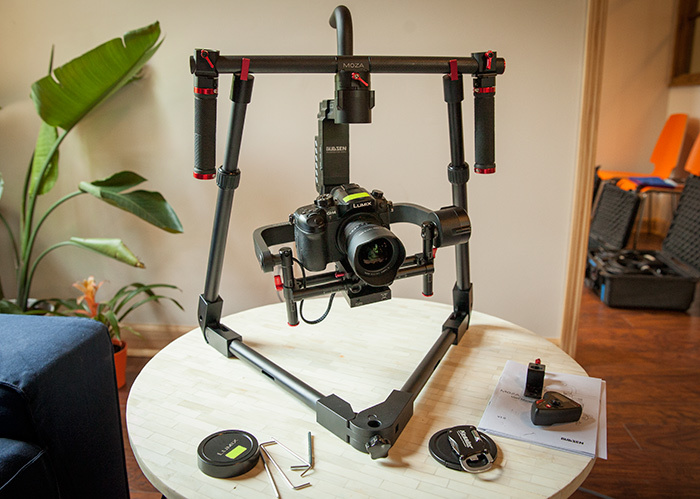 Balancing the Moza took me a while to get right. As I noted earlier, I’ve balanced several other 3-axis gimbal stabilizers, and the Moza was the least forgiving one I’ve worked with, in terms of being able to operate it without absolutely perfect balance of the camera. When I thought I was close, I’d power it on only to see the entire unit shaking from the motors working too hard. I watched a few balancing videos on YouTube and when I still couldn’t get it working, I had to contact their customer support. They responded quickly and recommended that I use a heavier lens and noted that I had the gimbal set up backwards on the support stand– once I did these two things and tried to balance it a few more times, the unit powered on properly and things seemed to be in order.

(I did eventually get the Moza to balance my GH4 with the smaller, lighter, Lumix 12-35mm lens. While it was frustrating when I struggled at first, it did get me very familiar with the setup. I’ll admit that it’s possible the problems balancing were all user error, and like other pieces of video gear, I just needed to spend some time working with it before I could really get quick and comfortable setting it up.)

There is a software available to control settings of the Moza, which includes both a mobile app and a desktop app. The desktop application has detailed control over power settings, dead angle, acceleration, etc. that is enabled when you plug in via USB. 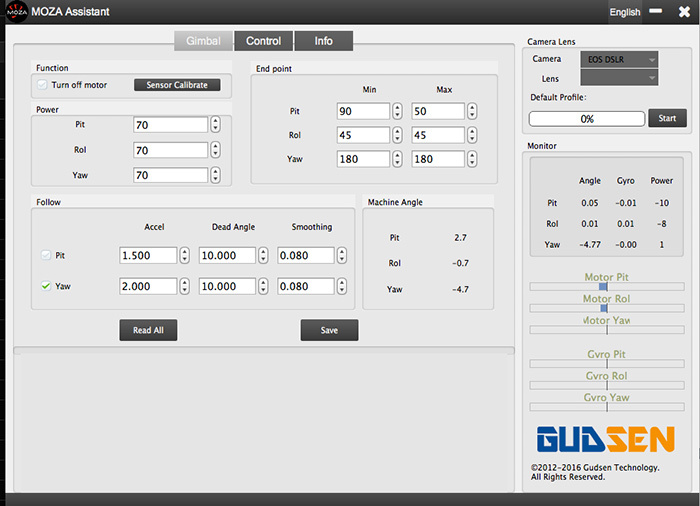 Once I would get a particular camera balanced, I made some notes on the positions of the different parts so that I could easily balance that specific set up in the future. I used the handy reference marks at each balance point as shown here: 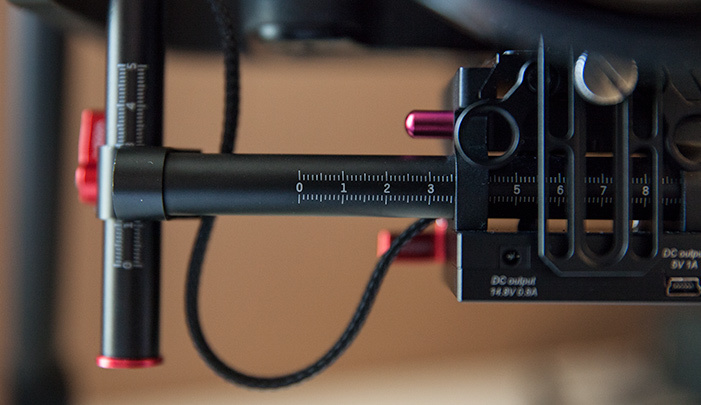 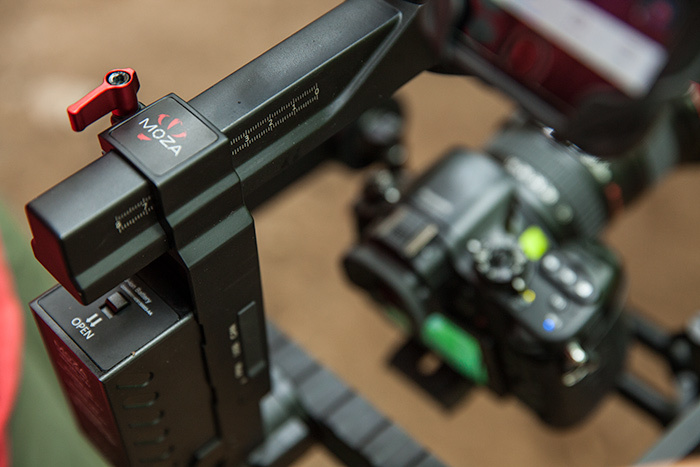 The Moza Lite is built to handle loads of up to 11lbs (5kg) so most DSLR sized cameras will be a great fit. For my first use, I operated a GH4 with a metabones adapter and Canon 16-35mm lens. The Moza includes a lens support to help distribute the weight. I later used a lighter camera+lens combo with no issues, but unfortunately I was unable to mount my Sony FS700. This wasn’t because it was too heavy, it was because that camera body is too long, and physically can’t fit far enough back to be balanced. Something like a Canon C100 or a Black Magic Micro Cinema Camera would probably fit but I did not have either one available to test.

The Moza Lite II package includes a thumb controller that has some unique features to it. The most prominent is the flat joystick-like control that will pan and tilt. This is extremely useful for situations where you might mount the gimbal onto something like a jib or car mount and want to control it remotely.

The thumb controller also allows quick access to a few key controls: setting the speed of gimbal movements when using the joystick, the ability to lock the pitch/yaw, and start/stop recording on a number of popular cameras from Canon, Sony, Panasonic, and Blackmagic. 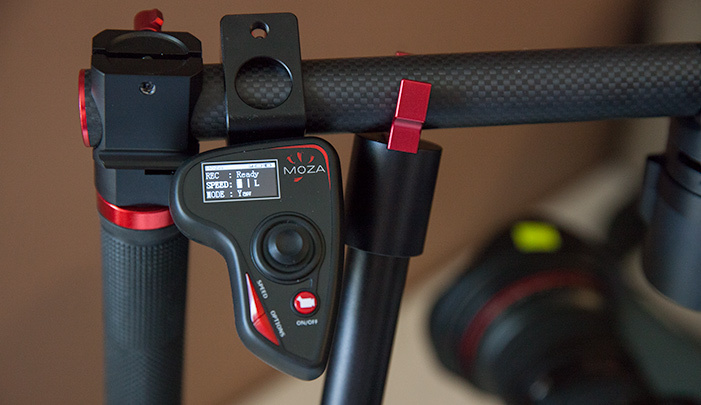 Perhaps the most unique feature was the roller dial on the backside of the thumb controller, which allows for focus control on certain Canon camera+lens combinations when you connect via USB to the power distribution unit. I tried it out with a Canon 5DmkII and a 24-70mm lens. I couldn’t get mine working very smoothly at first, but after switching liveview off and on a few times and flipping the focus to auto instead of manual, I had it working. This isn't a feature you'd use to rack focus, but rather something to conveniently change focus when setting up your shot. 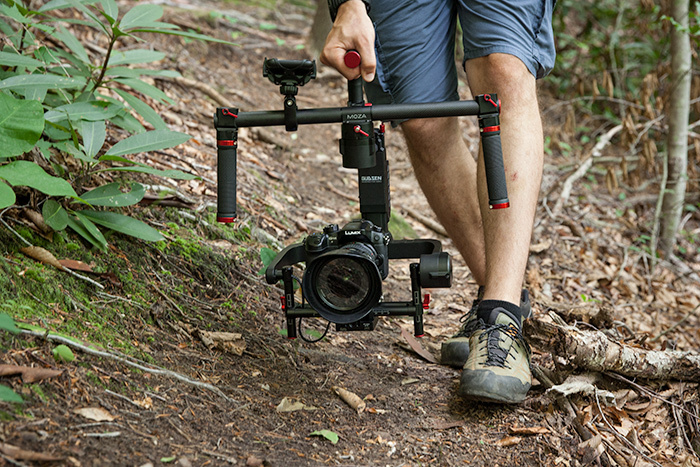 In use, the gimbal performed quite well. The footage appeared quite smooth, except for a bit of up-down wobble that I think given a few additional takes, I could get it even smoother. The battery lasted for at least 60 minutes during one shoot, and only one dot of battery life disappeared. Extrapolating off of that experience, I’d guess that the battery would last about 3-5 hours in average temperatures, which would be plenty for most shoots I’d use it for.

When floating the GH4, I remotely connected to it with my iPhone and the Panasonic Image app, which let me view my frame and control the settings, and then I could jump over to the Moza Assistant App to control basic motor functions. You could of course mount a small monitor/recorder on the handlebar as needed. 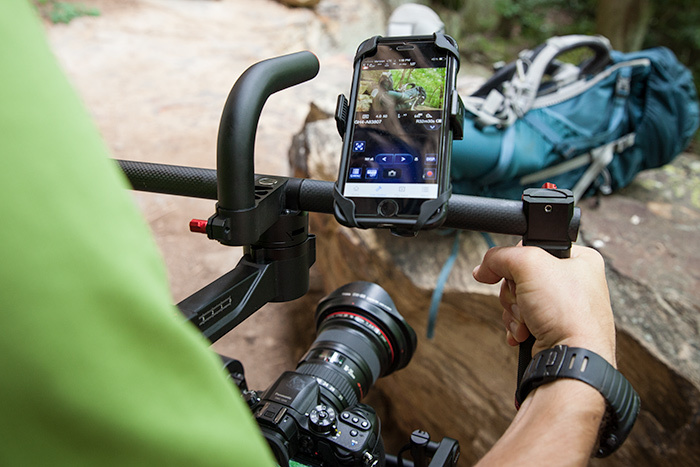 On my first shoot, I was getting b-roll of hiking so I built the gimbal and stand in my truck on an unlevel surface, and then I picked it up and carried it around to the tailgate, which was more flat and would be better for balancing. Upon doing so, the thumb controller broke right off of the mount. 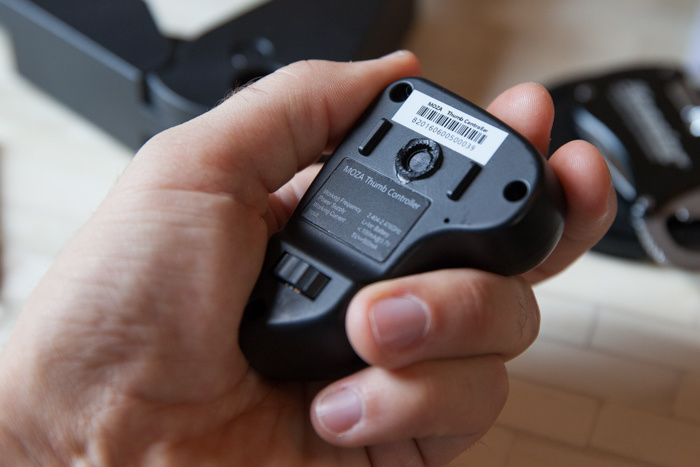 My best guess is that when carrying the Moza and its stand, the gimbal slid, and pressed the controller against the mounting arm. That small amount of pressure broke the plastic casing around the screw thread.

The build quality of the Moza isn’t suspect here– it’s made out of quality parts from what I can tell, just as much as any other manufacturer. But  the thumb controller on the other hand is made out of plastic and it is unfortunate that my first time out, I broke it.

The visuals I captured included what I felt were a number of practical uses: follow shots on uneven terrain, orbit shots around a subject, shooting out of a back of a moving vehicle, and floating through interior spaces. Here are two additional examples besides the video clip at the top of this article, which are straight out of camera - no color correction, no additional filters or stabilization added.

What could be improved: 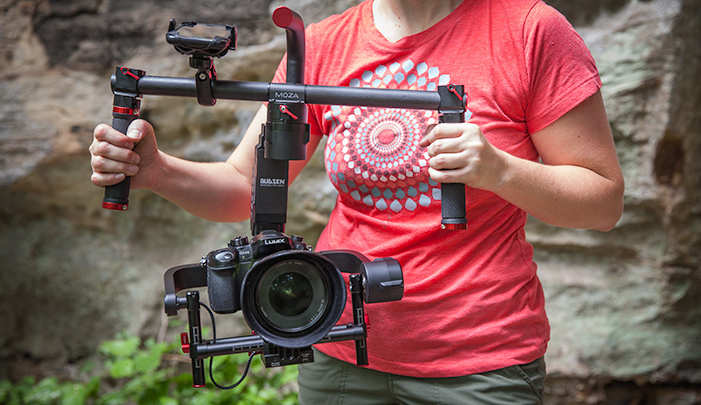 The Moza Lite II, once balanced and set up properly, does a fantastic job at delivering professional looking, smooth footage when using a compact video camera. If you can work with a little broken English here and there in the documentation, and take the time to dial in the balance of your rig, this will get you results that are unmistakable from other, more expensive 3-axis stabilizers on the market.

Speaking of money, I couldn't finish this review without comparing the costs, so here's what you're looking at.

As of the time of the writing of this article, the Moza Lite II (Professional kit) goes for $1600, while a similarly configured Ronin-M, with the addition of a case and thumb controller, would run just under $1,800 and a stock MoVi M5  (no case or controller) lists at $2,700. For more information on all Gudsen products check out their website. 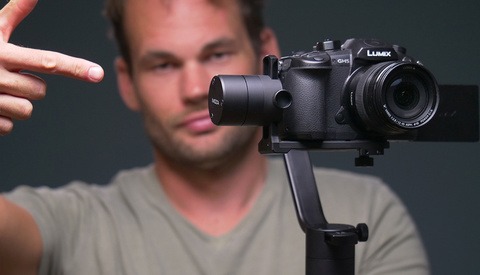 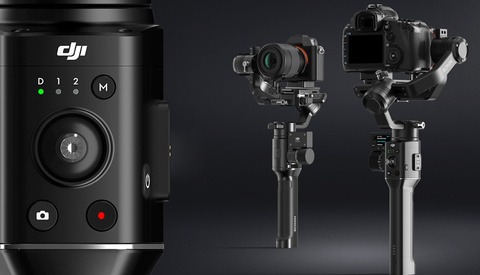 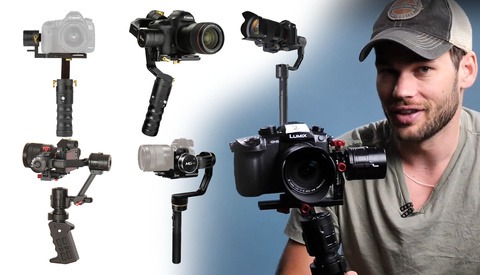 Gear / April 8, 2017
The Best Gimbal For The GH5 and Mirrorless Cameras