RODE downsized their popular Videomic with the new Videomic GO, half the size and can run without a dedicated battery through the use of in-line power. This looks like a perfect run-and-gun mic, but would the smaller size affect audio quality? You decide, as I compare the two against on-camera audio and a lav mic.

There is no argument that proper audio makes for great video. Your footage can be totally beautiful, but if the sound quality is sub-par, the whole production is dragged down. I like using a lavaliere microphone whenever possible, but sometimes it’s just impractical. In those cases, I rely on a my RODE Videomic to bring me clearer audio than the garbage that comes out of my on-camera microphone.

But as good as the RODE is, I have a personal problem with remembering to turn the darn thing off. It takes a 9 volt battery (the same things American smoke detectors require) and not only are they expensive, I almost never have one around. If I forget to turn the mic off on one shoot, the mic is dead by the time I take it out of the bag on the next shoot. I also don’t like the 9 volt because I can’t recharge it like I can my AA Eneloops and it means I have to carry a third power source around (the second being Canon lithium batteries). I can’t be the only one who feels this way.

When RODE announced they were releasing an in-line power mic, I was very excited because it meant I could potentially ditch the 9 volt requirement entirely. 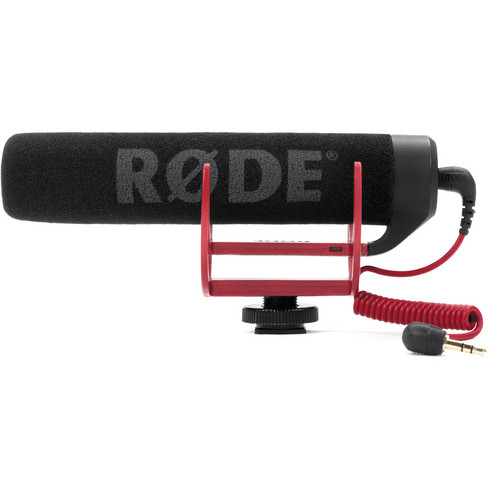 Let’s start with build quality. The RODE Videomic GO is built like a miniature version of the original Videomic, cradled in a shock resistant cage that prevents it from banging around when you’re jumping over hurdles, bears or cars. It, like the original Videomic, feels solid and reliable. It’s also very lightweight, as you were probably expecting. The original Videomic isn’t by any means heavy, but it feels heavy when compared to the GO. 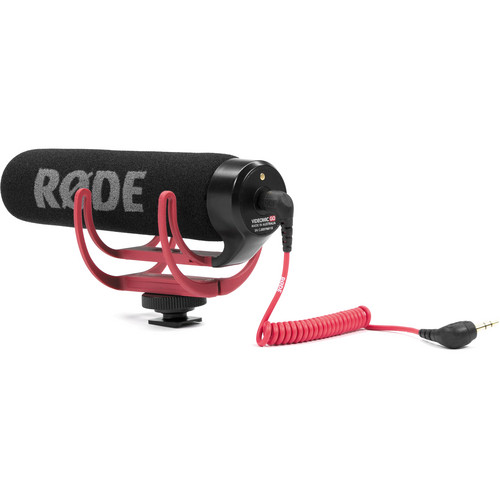 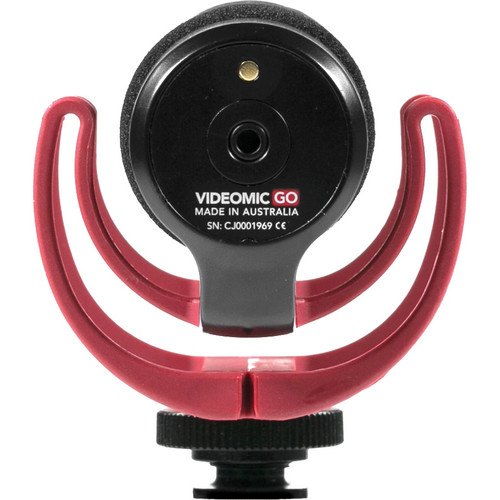 The in-line power cable / mic connection to the camera comes out of the rear of the microphone, which is the one aspect that I am least fond of. Camera mic jacks are always located on the side of the DSLR or even pocket-sized cameras, so it would make more sense to have the cable come out of the top or side of the mic to prevent it dangling down the back. I understand that the mic jack can sometimes be on the left or right of a camera, so the decision to put it on the back does make sense from a manufacturing perspective, but still. For the most part, camera makers have been putting the jack on the left side of the camera. What, can’t I dream of a consistent world where everyone puts things in the same place?

So let’s talk about audio quality, the most important aspect of this piece of equipment. If you watch my video above, you can hear how the mic sounds both two feet and four feet from my face.

At this range, the microphone produced nearly identical sound quality to the original Videomic. There is a nearly indistinguishable drop in bass quality in the GO, so for all intents and purposes it is identical. Comparing it to the on-camera audio is pretty obvious. It does much better with directional sound and cuts out considerable echo and hiss.

Both the original Videomic and the GO have much more difficulty here than they did from two feet. Though the on-camera audio is far worse than either, bass quality for both drops and there is a lot more echo. This is less of a problem if you are outside or in a room with less echo, but you will notice it. The Videomic GO’s bass problems are more noticeable here, as the original Videomic has clearer and a more full sound to it, while the GO is much “tinnier” sounding.

Using the Videomic GO is best suited to use with subjects between one and three feet away, directly in front of the mic. It does an excellent job cutting out ancillary noise and echo in these circumstances. However, any farther away than three feet and the GO’s quality drops, eventually becoming as unusable as the on-camera audio from a DSLR. Not unexpected however, and the proper use case for this mic fit exactly where I was expecting it to.

One last thing to note about the GO is that because it draws in-line power, there is a noticeable draw from whatever camera you are plugged into. On both a DSLR and especially with a camera like the Sony a7R, the power was drawn about 25% faster than without the mic attached. Just keep in mind that you won’t be able to shoot for as long with the Videomic GO than you used to with other audio options not using in-line power.

The RODE Videomic GO is an excellent little microphone for jobs employing smaller cameras in run-and-gun situations. Though the range is limited and the quality falters past 3 feet, it does a very good job of maintaining the quality the original Videomic reaches within the shorter range. Besides the bass quality of the audio being slightly below what I have come to expect, it’s still an excellent option for smaller cameras and lighter rigs.

Unless you're gonna be right on top of your subject (or perhaps run-and-gun as you've mentioned), I don't see the point of an on-camera mic. As you can hear on these test, they're simply too far, even at two feet you could hear a significant amount of the room's acoustics, which in that particular environment was pretty bad. Either use a lav or if you have an assistant or the environment to set one up, run a boom. I use either setup, either with a wireless feed, or along with audio from the camera's builit-in mic and sync it up in PlauralEyes. Sometimes if I can do it I'll run a lav AND a boom for an audio safety net.

Generally speaking all these little mics are nice-sounding, but you need to be right on top of your sound source to get good audio, and also sometimes that means running your lens wide, which gives your subjects an unflattering appearance.

Right with you on that one.

Thanks for the simple but effective demonstration of the different qualities from each mic. Not too impressed with the In-Line, I'll be sticking with the VMP.

Thanks for the review. Confirmed that the Go wouldn't work for my shooting style. I appreciate it.

How does this fair when plugged into a field recorder like a Zoom or Tascam? I'm in the market for such a thing as this. Anyone know if the 3.5mm of a Zoom H1 or Tascam DR-40 would power it?

I have a Tascaom DR-60D Linear PCM recorder and it does not provide in-line power. Therefore it doesn't work at all with that model and I was unable to test this. However I imagine it would be pretty much the same in terms of quality if your recorder does support in-line power.

Get the black spray paint out. If you're run &amp; gun, you hardly want to be worrying about catching a Red reflection in the shot.

Show us some waveforms - and repeat the same poem, reading or other comparable audio...sounds like hardwood floors also no?

i must say the recording quality of this mic is awesome. It can be attached to your DSLR camera and shoot great pictures with good quality of sound.