Have you ever had a bad day where you broke a piece of gear? Even if you're still lamenting that potentially pricey incident, I'm willing to bet it wasn't as expensive as this lens that Giancarlo Stanton just a hit a baseball off of.

If you follow baseball much, you surely know that Giancarlo Stanton is on an absolutely historic tear as of late, hitting balls over fences seemingly every night. Even if you're not a fan, all you really need to know is that tonight, he hit a another home run, and the unfortunate (and inadvertent) target of that shot was a tv broadcast camera.

As the cameraman relayed to the broadcast booth, the shot broke the zoom on the lens (and possibly more), a Canon XJ72, which runs for about $60,000 on the used market at the moment. And I know you're probably drooling over the specs of that lens like I was, so just to clarify, it's a 9.3-675mm f/1.7-3.45 lens (designed for the 9.6 x 5.4mm image format for 16:9 television), which made me cry inside a bit when I thought of that baseball hitting it. In fact, it maintains that f/1.7 aperture all the way up to 333mm. Flip on the built-in 2x extender, and it becomes a 18.6-1,350mm f/3.4-6.9 lens. The monster lens weighs almost 50 lbs. and is obviously hardy, but was still no match for a major league power hitter. At least the cameraman was alright! 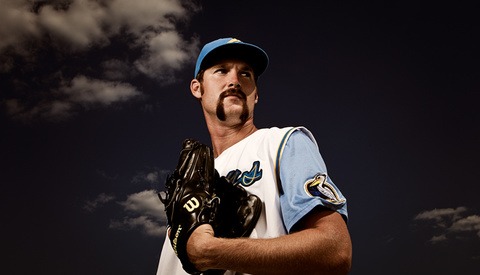 I can remember two incidents.
The first was when I was walking on a moor covered in snow. At a certain point, I noticed I was walking on ice instead of snow and then my foot went throught the ice. I sprinted forward, got airborne and landed on my camera. My but but hurt for weeks and the mirrorbox of my camera got broken.

On another occassion, I stumbled and broke my lens.
All together, this was from costing 60.00 dollars.

Living in S. Florida, I cannot remember when the last time the Marlins was in the news in any way, never thought I'd see an article on fstoppers about them ;)

Considering the Marlins ruined the '97 World Series for me, I'm ok not seeing any articles. #toosoon :P

If they aren't insured, I'm sure Laurence Leavy would pick up the tab....@marlins_man

I remember two years in a row watching televised games at the Little League World Series in Williamsport and seeing tipped balls shatter the lenses of ESPN's backstop cameras. For some reason they didn't have them shoot through Lexan, like I've seen others use.