The Microsoft Surface Studio is basically an all-in-one PC with a built-in touch screen. Where it stands out is with its ability for the screen to tilt down into a type of drafting table. It uses the same pen functionality that can be found on the Surface Pro 4 which is fantastic for drawing, writing, and can even fully replace using a mouse.

In addition to the pen, They have introduced a new tool called the Surface Dial. This dial acts as a type of shortcut device that can be used to quickly transition through a menu of tools. It can also be used to change pen color and brush size while you are drawing. The Surface Dial works as a standalone device on your tabletop, but also has the ability to interact with the screen in order to give pop-out shortcuts and tools that can then be selected from with your pen or mouse. I am actually hoping that the Surface Dial will be compatible with my Surface Pro 4.

The computer is comprised of a 28-inch screen with a 4,500 X 3,000 (192 PPI) resolution and can be purchased with either an i5 or i7 processor and up to 32 GB of RAM. For the full list of specs you can visit the Surface Studio tech specs page. The main downside is the starting price of $3,000. While not terrible when you consider that a Wacom Cintiq will run you around $2,299, it's still a hefty price tag.

What do you all think? Has Microsoft taken the lead in computer innovation with the new Surface Studio? Do you plan to pick one up?

Also, who else absolutely loves the product video?

Product video is amazing. Be honest though. Do you actually use the touchscreen to edit on the Surface Pro? I love mine but I find that I still just use the mouse.

I think I may possibly use the touchscreen on something like this, it would be similar to using a Cintiq I'm guessing.

For artists who like to freehand, nothing can compete with this. But for photo editing, I'm still not convinced that a mouse isn't the fastest option.

I'm like you with my SP4 specially because of the small screen but I'd like to hear from people who use a Cintiq in their workflow for things like dodging and burning. I'd really be interested if the Surface Pen is really usable for this kind of work

I did a lot of research before getting my SP4 specifically I reached out to artists and illustrators. The ones that were use to using a cintiq all agreed that the surface pro and pen were better and the device as a whole offered more versatility.

Beautiful machine & quite innovative - though pricey.
Love the way the screen moves.
Surprised to see such cool hardware from Microsoft.
Hopefully will push Apple to come up with something new.

I'm not so sure that I would like to edit directly on such a large screen.
Thats a lot of screen real estate to navigate & having to continually clean the screen would be rather annoying. I think I'll stick to my 27in iMac & Intuos Pro medium.

Using a 'rodent' for photo editing is so last century!

For photo editing on lightroom, sure the mouse is the fastest way most of the time, but for photo editing on photoshop (not only for dodging and burning but also for using the clone tool, pen tool, etc, anything that requires any sort of precision) it is much better to use the pen than a mouse.

Oh I use the touch screen all the time for culling. Lightroom cc has the ability to swipe left and right to go through images and you can swipe up and down to flag. It's not a super fast way to cull, but it's a nice way to casually cull while watching TV on the couch. I also use the pen for photoshop cloning and such when I need precision.

I have the SurfaceBook i7/512GB SSD and I absolutely love it. But to be honest I almost retouch 90% with a small Wacom Bamboo. But for Dodge & Burn I use often the Stylus from the SB itself.

But here are some of my experiences i gathered with the SB:

When I wake up in the morning, I detach the screen and drink my coffee on the couch and read some news and go trough some mails. The screen is so light and good to read that it is a real pleasure for me. And in this situation the touchscreen is perfect to use.

The greatest thing about the SB ist the versatility. I am very often at agencies where i retouch directly inhouse. With my SB I can retouch and if I got some new results I go to the producer only with the screen detached and we can discuss changes. Also some producers write the changes they want directly on the screen on a seperate layer in Photoshop. After the short briefings I go back to my "freelancer" desk and attach the screen with the base and continue my editing.

So at the morning it is my newspaper and at work it is my editing machine and my presentation screen. Also I can tether directly to the machine when I'm on location without getting in trouble with battery life. And at the evening when I want to watch a movie, no problem, I flip the screen and I can enjoy.

I think the Surface Studio is a nice and logical step from Microsoft to show how a computer should be. Many manufactures will follow, I promise (Maybe also Apple will follow).

For lightroom I cant use a pen but for any Photoshop work I use my pen a ton. I also have a 20inch tablet on my desktop so Im very use to using a pen for editing. How good the touchscreen and pen were for editing was a big reason I went with the SP4 to replace my laptop.

Maybe not us, but our children will probably go mouse-less.

The video is amazing; the camera movements, the special effects, the music, I welled up when the dial hit the screen and the color appeared.
As a product, it's awesome, but I'll wait for a $3,000 version with SSD and GTX1080. Just like the Surface Pro wasn't acceptable until the version 3, I love my i5 8/256.
I use the touch screen for dialog boxes and other options, I rarely retouch on it though, since I photograph objects more than people and my desktop is loads faster.

I think a GTX1080 is bigger than the whole computer :)

Nvidia has actually a GTX 10xx series for mobile computers like laptops. But they are not like the "M" versions like before where it's underpowered compared to their desktop counterpart.

I'm surprised they didn't put a GTX 970m in all three, definitely powerful enough for 4k and surely it would be cheaper to only have one GPU license?

I'll trust the engineers new what they were thinking.

Yes the Video is AMAZING! Everybody who see this will be brain washed and need that product :D

I use the touchscreen all the time in Lightroom. There's a lot of touch shortcuts. I do use the pen more though. Surface Pro 4 is such a life saver.

I bet Apple wish they could come up with a similar form-factor like this!

Apple has made it abundantly clear they don't care about the Mac lineup anymore. To them, it's a fancy place to sync your iOS devices.

It does actually remind me of the original iMac with the round base over a decade ago, but that didn't tilt the same.

I wish we could just buy this monitor, not the outdated and unmodifiable mobile-part workstation attached to it. It is better than the Cintiq QHD.

That would be awesome, the only thing I don't get is why all the Surface line monitors have a non-standard resolution, they are great monitors but the proprietary resolution really bugs me. Let's say I would use it for video editing and I want to see my 4K video in full screen, I would have a black bands or a cropped video

Some what expensive with no pure SSD option.
Also no USB -C or TB 3 and how well will a laptop GPU drive a large screen?
This really could hurt Wacom large display business.
But it looks great.

This is a great ad but did anyone else notice both Microsoft and Apple used the same /colored dust/ explosion? 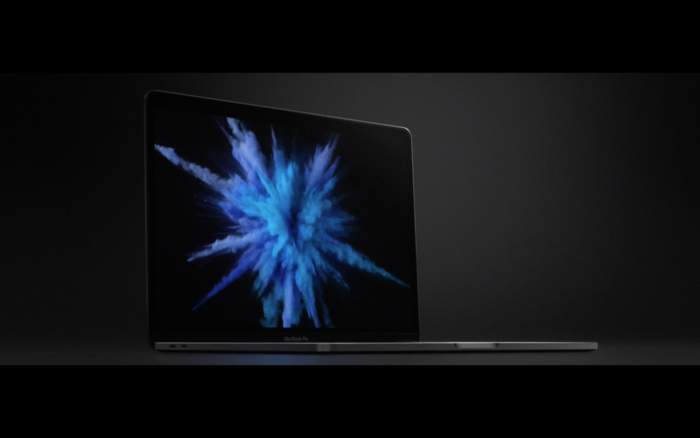 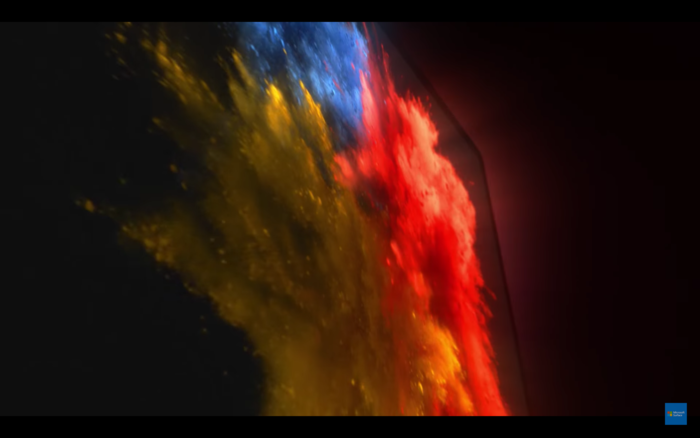 And did anyone notice that the "deconstruction" video of the MBP at the Apple keynote yesterday looked a lot like the one of the surface studio?

Haha yes i realized that yesterday, it is very similar. But microsoft was one day faster :-)

The Surface Dial is compatible with all Win 10 devices as it's a BT puck. MS specifically called out SP3 and SP4 and SB as all compatible, however only the SP4 will get to use the puck on the display after a firmware update going by the press comments after the show. The fact you can switch between DCI-P3 to sRGB on the fly using the action centre can be a time saver.

MS also made it abundantly clear this is for professionals and was built on their requests and feedback. Some of the after show demos was amazing and there's already a lot of support built in to apps that's coming out. There's a lot of tech in this that's not readily apparent, and the specs just don't do it justice I feel.

It's not all roses and I'm curious to see how it'll handle 4k video editing and multi-layer medium format imagery. However it's fairly clear MS out Apple'd Apple this year.