Sony Announces the a6400: an APS-C Camera Perfect for Vloggers?

After a month or two of intense speculation, Sony has made its first major announcement of the year: the a6400.

The first notable feature is the inclusion of a 180° tilting touchscreen that makes it suited for vloggers — or does it? Some are already pointing out that the way the screen flips vertically (rather than out to one side) means that it’s useless for vlogging if you plan to mount a microphone onto the hot shoe. 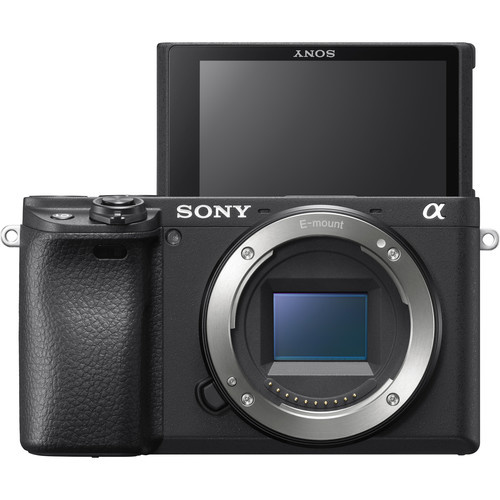 Borrowing from the a5100, the screen on the a6400 flips vertically.

Yay for the flip screen on the Sony a6400! Not exactly perfect for vlogging, tho. 😂 pic.twitter.com/XbYeVYTFTv

Another frustration to many will be the lack of in-body stabilization. For me, this is for two reasons: firstly, it justifies the incredibly competitive price point of just $898. The updates to this model aren’t huge but this is still quite a low figure considering that the a6500 had a suggested retail price of $1,400 when it began shipping in November 2016. Secondly, it will make a clear distinction between the a6400 and the rumored a7000, Sony’s other APS-C camera due to be announced in the coming weeks. Be sure to let me know in the comments if you think I’m right.

The rest of the features are incremental improvements on the a6xxx range, offering eye AF, 24 megapixels, 11 frames per second with continuous autofocus, a microphone input, and 4K video at 24 or 30 fps.

Confusingly, the a6400 will be the successor to the a6000, the a6300 and the 6500. Why Sony has chosen this illogical naming convention is not entirely clear. TechRadar suggest that this is because, lacking stabilization, the a6400 replaces the a6300 but not the a6500.

Sony has been keen to emphasize the speed of the a6400’s autofocus system (0.02 seconds acquisition over the A-series’ 0.05 seconds) and has promised that animal eye autofocus will arrive before long via an update to the firmware.

You can get your preorders in as of Thursday with stock expected to arrive in February. Will you be buying one?

Could definitely work as a secondary camera and a film camera in the field when you need your main camera for photography :)

Who was the rocket scientist who put a flip-up screen on that thing? I guess they're trying to protect sales of some other Sony model(s) used for vlogging, because if they had put a rotating swing-out screen on that thing, at that price that would've sold by the millions in the vloggersphere. If you use an external recorder and sync in post I suppose it could work.

You can get like a c mount thing that offsets the mic to the left or right keeping the flip unobstructed. Forget what they are called, it’s not ideal, but I think it’s a pretty strong camera for the price point. Good gimbal cam second B cam to an existing alpha user.

Vloggers are like mad money right now so I get the constant relating new camera to that market. The one thing with a flip is it’s good to use as a quick ref but it’s suoer distracting if you are constantly looking at that screen mid shot breaking eye contact. The focus tracking is probably more important.

I’m waiting for some a7siii news but given the price and what the camera offers, not bad this one imho.

OK so now we have cameras that are vloggers oriented (poorly in the case of that one apparently). Where are the cameras for photographers who don't care about videos ? Like an X-T3 with no video capabilities at all so it's cheaper ?

Nikon made the Df and very few people bought it. Sure it had other short comings but the number 1 complaint was a lack of video.

It doesn't make much sense in this day and age to release a camera without video capabilities. The only extra thing it really employs over a normal camera is a microphone and possibly a mic and headphones port. This is a negligible cost so you wouldn't be saving much money at all on the consumer end while simultaneously losing a ton of functionality.

It would be a difficult product for companies to position in the market. The only company that could probably get away with something like this is Leica seeing as how they're able to sell cameras without screens or cameras that shoot exclusively in monochrome.

If you are going to use this camera to selfie-vlog, wouldnt you use some kind of cage anyway? Just use one with no toprail and mount the mic to the side...

Is there some patent or legal thing regarding fully articulating rear LCDs? It seems like such a no-brainer to include as it appears to be the implementation that has the fewest downsides. Instead, we get weird implementations like the Sony A99 and Pentax K-1, or flip-up options like we see here.

I highly doubt cost is a factor considering it's been in inexpensive Rebel bodies since 2011 and many other manufacturers have them in their point-and-shoot cameras.

Maybe, but around the time the FZ200 came out there was the Rebel T4i which combined the articulating LCD with a touchscreen so the tech was definitely out there and still in relatively inexpensive cameras.

I like this sony camera. I am 72 and have slight tremors in my hands. This unit has no image stabilization what could kill buying. This eye catching on this new camera, will that make the image stable? Or no it won't?? any suggestions?

Unfortunately you’d only be aided by OSS using native Sony lenses but I personally have never benefitted from IBIS on any Sony camera I’ve owned.

I actually turn it off so it doesn’t mess with any shots that I do take.

I also have a tremor, and getting the A7iii with the eye autofocus in continuous mode was the best choice that I could have made. If you get this, make sure you get stabilization in the lens and try to shoot with a higher shutter if you can.

The biggest killer for me on this camera is the battery. If they changed to the new Z battery, I could use this as a second body replacement but if I upgrade my second body, I want the battery life I get from the Zs.

Why do you seem to hate youtubers so much? Don't watch it if you don't like it.

Hi, I have nothing against them (hate is a strong word. I watch some of the vloggers and they are useful).

My rant is that the companies equipping photography gear with all sorts of video capabilities and compromising the photography centric features to cover photographers of different genre (e.g. landscapers are fine with lack of IS due to tripod, but street photographers need IS, etc...).

Flipping screen, does that mean I’m gonna look at the viewfinder which is upside down?

The screen corrects itself to be right side up when in self portrait mode.

Ok they thought that far. But still weird it doesn’t fold to the side.