Canon's mirrorless lenses have been quite successful for the company, offering impressive optical quality that sets the bar quite high. However, Canon fans are still waiting for a stronger mirrorless body that pushes the boundaries a bit more from the company. The good news is that it seems that will be changing soon, as the company is likely to release two new mirrorless cameras in the coming months.

Canon Rumors is reporting that Canon will likely be releasing two new EOS R cameras in the first half of 2020, with the source stating that the company will be "stepping it up a gear" with the new bodies. While the EOS R is a reasonably capable camera, the mirrorless lineup is missing both a high-resolution studio/landscape camera akin to the 5DS R and an action-oriented camera similar to the new 1D X Mark III. While it is not clear just quite yet what sort of cameras Canon is planning on, I would not be surprised to see one or both of the aforementioned types of cameras. It would be particularly exciting to see a high-resolution camera given the optical quality of some of the new RF lenses. 2020 should be exciting for Canon fans!

Gear / January 27, 2020
If the Canon 1D X Mark III Is This Good, Why Would Sports Shooters Ever Want a Mirrorless Version?

eagerly anticipating without getting my hopes too high.

Yeah! How many times has Canon dashed my hopes.

I'm gonna buy all of it. 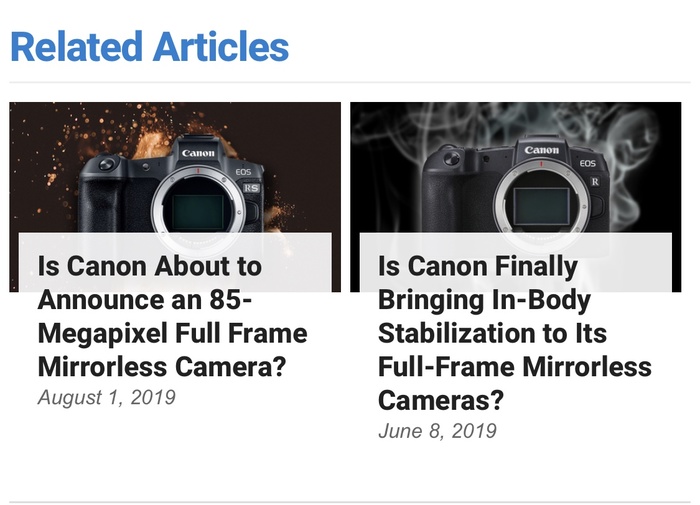 I beg to differ.

It is a reasonably good camera, at a decent price too.

Go ahead and beg and the rest of will create awesome pictures with a camera that quick frankly kicks ass and supports RF lenses that really kick ass. If you like your camera or brand that is fine, but don't confuse buyers by suggesting that the EOS R is not a viable option. It has a fast processor, generally equivalent sensor to 5d IV, very customizable, crop 4k that doesn't overheat and quite frankly overkill for smartphone vloggers, etc, etc, etc..... just take some damn pictures people.

I wonder if that Instagram camera, the RIP, is one of them, LOL! That new name might be telling!

How about before Canon releases two new EOS R cameras they support CR3 with a codec so all of us EOS R owners can preview thumbnails in Windows 10 explorer. And no, RAW + JPEG is a lousy solution and preview apps add steps to the workflow. And Canon don't blame Microsoft and Microsoft don't blame Canon. Get it done.

I've never been a fan of Canon. My digital history has gone Olympus (full 4/3) -> Nikon DSLR -> DSLR/Mirrorless setup when I added a Z6 mostly for video.

But that damn RF 70-200 is so compelling. If the AF of their high MP camera is up to snuff, I could see myself ditching my D500, having my Sigma 500mm Sport's mount swapped to EF, and switching over. But I'd really miss the 300mm PF. Not sure that the 400 DO II is a reasonable replacement for it.

I was very disappointed with the Z-mount 70-200. I'm going to Costa Rica later this year, and the only 70-200 that would even fit in my bag without tossing 2 other things is that Canon. Once you stick a big prime in your bag, you start to have very limited space. Of course, my lamentations are criticized among the faithful, as I'm sure the Z-mount lens is likely to be better optically (if you go pixel peeping), but it doesn't do me any good if I can't fit it in my bag. It will be an optically amazing lens - (probably the best 70-200 ever based on MTF and samples so far) that sits on the shelf back home.